Menu
Install the app
You are using an out of date browser. It may not display this or other websites correctly.
You should upgrade or use an alternative browser.
Hearts of Iron IV 36712 After Action Reports (AAR)
Show only dev responses

Hi everyone, today it's time for another bag of tricks diary (the previous two can be found here and here). Let's jump straight in!

Attachés
Sending a military Attaché is a new diplomacy action coming in Waking the Tiger. It’s something you can only do while you yourself are at peace and the receiver is at war. It requires good relations and ties up a lot of your command power. In exchange you get army XP back as well as intel so you can see the receiver nation’s war. This is a pretty good way to get XP if you are a nation that isn’t able to send volunteers for example. The receiver gains also benefits from the attaché: 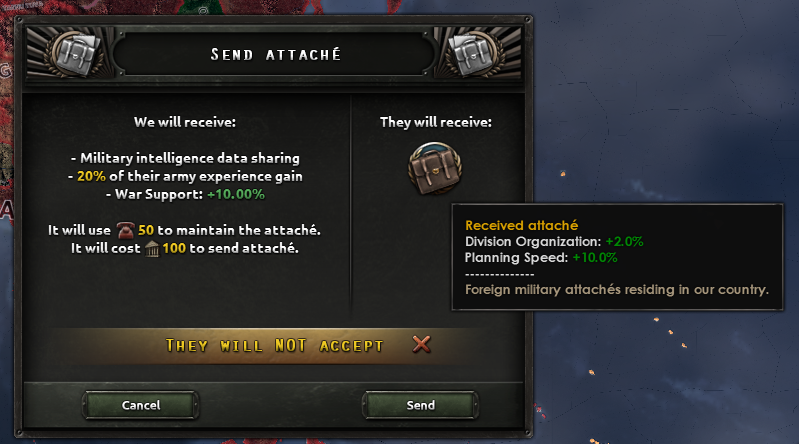 Sending attachés will make any country the receiver is at war with dislike you, and they may issue a diplomatic protest that can seriously hurt your standing with them as well as cause a stability loss depending on the relevant ideology (so if you refuse a demand from a communist country, you will lose stability depending on the strength of communists in your country).

Extra ground crews
Another good place to spend command power when you don't need it for your armies is by prioritizing strategic air areas to receive extra ground crews. A prioritized area get +10% efficiency for planes operating there which can be great in certain areas to allow your planes to fly more effectively. Prioritizing ties up 20 Command Power per area while active. 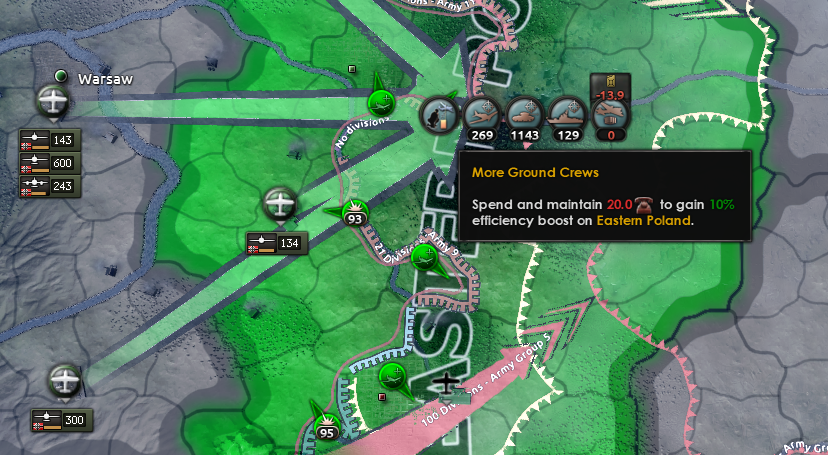 This ability as part of 1.5 Cornflakes and thus available to all.

Historical Army Insignias
As part of the effort to make the game feel a little more immersive and allow you to better recognize your armies, we have added Historical Army Insignias to Germany, France, Britain and the US (the Soviet Union and Japan didn’t really do Army Insignias). They can be assigned to any army like any other army insignia but won’t take the army color. All told there are 18 German icons, 11 British icons, 8 US and 3 French ones as well as 10 shared icons that are available to everyone else (some of them are locked to certain ideologies). 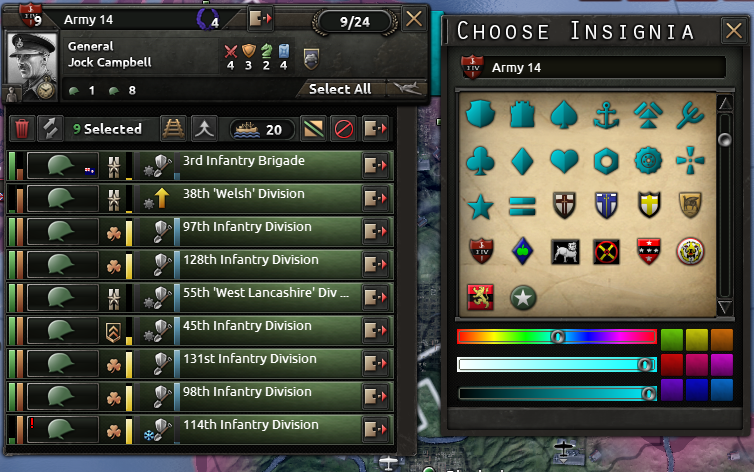 If this is a popular feature, we might consider expanding it to include historical division insignias also in future DLCs.

Volunteer Air Wings
In Waking the Tiger will be possible to send volunteer air forces. Where before you could only lend-lease planes and hope the AI knows how to use them, you now get to control them yourself (you can still lend-lease planes as well, of course). This means you can have the Condor Legion or The Flying Tigers and help out your own volunteer forces. 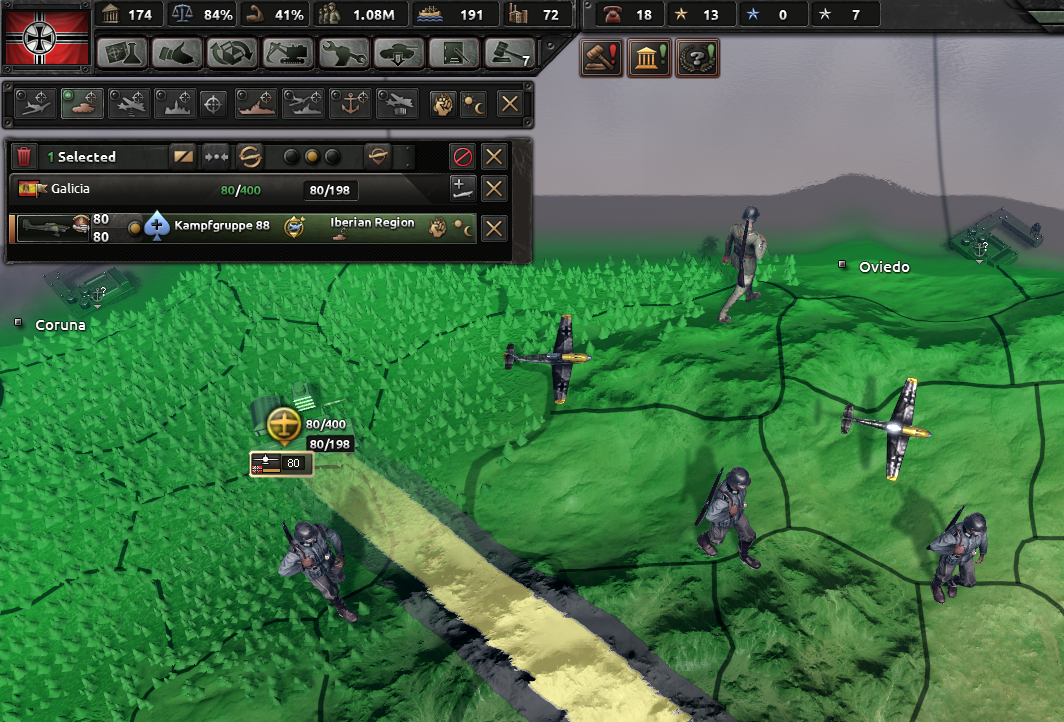 Rather than being sent to another theater like with regular volunteer forces you simply get access for a certain amount of planes to base in and operate in the receiver nation and you can just transfer them as normally. The amount of planes you can use depends both on the size of your airforce and the receiver airbase capacity.
Speaking of Flying Tigers, they actually get a special decision. China can invite the Flying Tigers which will unlock a decision for USA where they can decide to respond. This will both give fighters to China as well as increase their volunteer cap allowing them to send more wings over to assist. 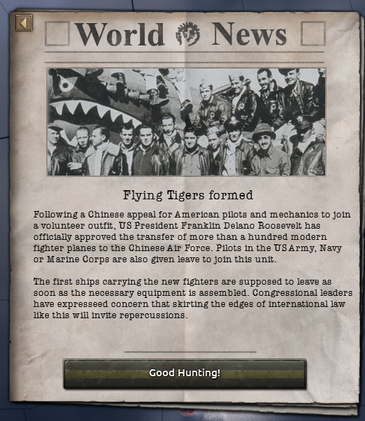 I’m home with stupid winter influenza so today we got @Da9L and @Archangel85 playing historical Japan in World War Wednesday, so tune in at 16:00 CET if you want to see how that looks or want in-depth info about focus tree design!

Best possible use of the new Historical Army Insignias:

Was kind of hoping for a release date though (maybe on the stream?). But still AWESOME!
Last edited: Jan 10, 2018

Could we get the ability to designate what kind of sprite(or type) our divisions get? For instance a lot of my infantry divisions become artillery divisions, and i feel the historical layouts clash with reality. It would greatly add immersion for my ability to fully customize the look and feel of my army. (And this is someone who only used sprites in hoi3, so i really appreciate the way you've done it in hoi4!). As for balance i suppose you should always have the selected sprite/type be a part of your unit as to prevent silly stuff like infantry armored divisions.

podcat said:
...they may issue a diplomatic protest that can seriously hurt your standing with them as well as cause a stability loss depending on the relevant ideology (so if you refuse a demand from a communist country, you will lose stability depending on the strength of communists in your country).
Click to expand...

I love details like this. An expanded, deeper diplomatic system would do so much for this game, and the more of these things you can make dynamic (ie. available to anyone) rather than scripted events, the better .

The addition of small-scale, limited fighting like border clashes is hugely promising, too, and can do so much for things like the smaller wars that broke out before WWII (like the two counters who went at it in east Europe, I forget which ones) and of course the war in 1940 between the USSR and Finland.

It could also be used for cases where a much weaker country was seized quickly, like the invasion of Denmark or the Netherlands.
Last edited: Jan 10, 2018
Toggle signature
My compilation of all the information from the first Barbarossa dev diary and subsequent dev replies.

Does the attaché national spirit stack if several countries send them to one nation?

Umm I hope Atachés can’t be used to troll like the coup and boost pop mechanics.
I can see Romania sending them to France in order for them to get a unity hit.
Toggle signature
My Hoi4 Improvement Ideas:
Some thoughts about Land Warfare in 1.5
QOL improvements for garrison command

im glad to see something being added for countrys that cant send volunteers themselfs
keep up the good work guys!
Toggle signature
"...if life give you lemons you are forced to make mass lemonades." - Pyramid_Head, in reference to MA doctrine and house rules

All of these are really nice additions. Thank you!

I would also love to see more historical army insignia in the future.
Toggle signature
Lead modder for Equestria at War for Hearts of Iron IV. Founder of: The Four Nations - An Avatar: The Last Airbender Mod (CK2).

D3m0 said:
Does the attaché national spirit stack if several countries send them to one nation?
Click to expand...

No, you get the same benefit as receiver
Toggle signature
Reject reason to make the impossible possible!
F

Looks great, but: should be "Observers" (Edit: or "advisors") rather than "Attaches". Practically every embassy to anywhere of any significance has a military attache, and often a naval attache as well, even embassies from bitter enemies, so the function isn't really obvious from the name.
Last edited: Jan 17, 2018
Toggle signature
Interested in a Southern Victory mod for HOI4? Go here.

bERt0r said:
Umm I hope Atachés can’t be used to troll like the coup and boost pop mechanics.
Click to expand...

I doubt it.
The pros and cons have to be weighed by all 3 nations involved.
If Germany sends an attache to Nationalist Spain, Republican Spain can issue a diplomatic objection, which can hurt Germany's stability as a punishment for buffing spain.
It's not a "push button, do thing" like boosts or coups, with little to no chance for the target nation to prevent any affect.
Toggle signature
​

I am asking me, what will happen if you lose planes as volunteers in combat? Will they be replaced? In manpower and material? From which country?


podcat said:
Next week we will be taking a look at a hopeful little empire on the rise for Waking the Tiger…
Click to expand...

What does that mean? Little empire? Manchukuo? .... it has to be Manchukuo! Arg, as I start to hate these teasers
Toggle signature
"I stepped out. I did not step down." - Volrath, The Fallen

As for emblems, the #1 thing I want is the ability to customize NATO counters in-game by being able to choose between, and combine, different counters (infantry and rocket artillery, for example), and add modifiers like "Light" and "Heavy" as well as numbers or letters. Also it'd be helpful if I could change the background colour of a counter, so that regular infantry could be one colour, while the more artillery-heavy divisions could have a different colour, for example. Would be hugely useful when you have, for example, two or three types of infantry divisions.

Also, a button that allowed you to Browse your hard drive for a picture file and make that the division, division template's, or army's emblem would be hugely time-saving.
Toggle signature
My compilation of all the information from the first Barbarossa dev diary and subsequent dev replies.

Those all seem like great quality of life improvements. Well done.

I think volunteer air wings look the most interesting because they will let small nations potentially have a substantial expeditionary impact despite their limited manpower. Is that what was intended?

Also, I cannot imagine that the historical insignias will NOT be popular, so I look forward to seeing more of them show up in the game.