Time flies and suddenly its Wednesday again, and Wednesday means diary time! As you might have noticed we just announced Death or Dishonor, so that together with the 1.4 update is going to be today's topic! After that you can dive into technical AI details with @SteelVolt.

1.4 "Oak" Update
As normal the DLC will be accompanied by a free update, this time called 1.4 "Oak". We wanted to make sure to take this time to deal with some big, complicated and difficult things that the community had been asking us for for a long time. First up is improving air gameplay, the other is the AI. After the 1.3 update there were a couple of areas identified where the most important was German AI performance. We started digging into that and there were a couple of hurdles to solve. 1) First of all divisions along front lines were not fighting as effectively as they should which led to a lot of "shuffling" and fronts slowing down massively. That meant that Germany struggled a lot versus soviet union. 2) Axis minors did not manage expeditionary forces very well when it came to helping out Germany. 3) In some cases Africa could end up as a big battleground draining precious axis materiel and weakening them (this one we solved with impassable sahara, check last diary). 4) Unit usage such as garrison and template and production management were far from optimal.
SteelVolt will be filling you in on 1-2 of those above today. The rest and further details for Oak will be covered in future diaries.

Death or Dishonor Country Pack
While we buckled down on the AI our brave content designers have been working as part of our long term plan to flesh out the world with unique national focus trees and extra immersion. We felt that the kind of expansions we have been doing/planning were of quite different types so we wanted to clarify that. So a bit like how Leviathans was labeled a Story Pack the HOI4 version will be "Country Pack". A country pack then is an expansion that isnt a full $15-20 (DoD is $9.99) and that focuses sharply on a specific set of countries or region. For Death or Dishonor this is Romania, Hungary, Czechoslovakia, Yugoslavia - Nations swept up in the turmoil of mid-century europe and faced with pressure and threat both from allies, axis and comintern. Nations that could have gone many different directions leading to interesting "What if" scenarios while letting people who want to relive history get behind the wheel of nations like Romania and partake in operation Barbarossa etc. The pack also contains new features like Equipment Conversion (StuG:s!) and equipment licensing, things that we felt was well in line with the theme of these nations.
More details here!

Here we are again. It has been quiet these past couple of months, but we have been hard at work nonetheless. We were graced with time to catch up with some of the technical debt we had worked up earlier, and getting this time has really been a blessing. Several aspects of the AI has undergone substantial improvement and in a couple of cases major reworking in order to not just improve how they work now, but make it easier to work with for future expansions and improvements.
The first major part I want to talk about is what we call the unit controller, or what you may know as the "battle plan AI". Since this is a feature intended to be used by the players as well, it is important that it feels as good as possible. As some of you have noted, there have certainly been room for improvements, the most severe issue seeming to have been its tendency to send units from one end of the front to the other and sometimes at the same time having another unit from the other side coming to meet it and take its old place. This was usually done with strategic redeployment, resulting in them having zero organization upon their arrival. Less than optimal, for sure. 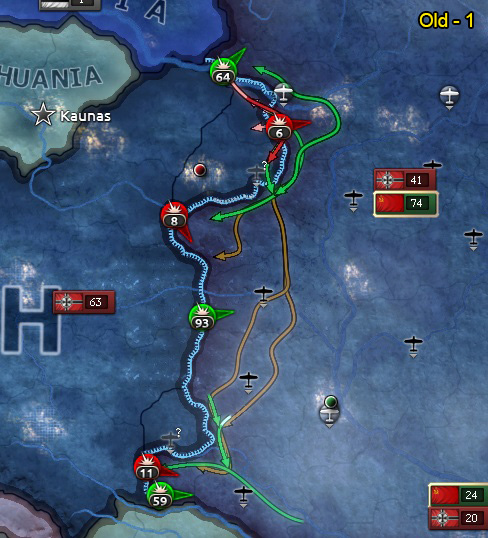 We gave the task of improving this to one of our coders who was really annoyed with how it worked. While we expected him to have to rewrite the system almost completely, he ended up doing only some rewrites but a ton of touch ups and tweaks.

The results is something that at first glance might not look significantly better, but it sure feels better to play with, and upon closer inspection does a better job over all. First of all it is much more reactive.
Before, units were sometimes given long move orders along the front, they had to complete the move before getting new instructions (which would sometimes be to move back to where they came from). This was in fact a way to solve the even worse problem of units very often getting stuck being given new move orders every hour to different locations, and not moving anywhere at all as a result. Now, however, we have finally gotten time and resources to work out a proper solution, and units that are moving can be grabbed for new orders as the front situation changes. This means that even while units still sometimes do get longer move orders, though more rarely than before, they almost never finish them, but gets grabbed by something else on the way as the front changes. 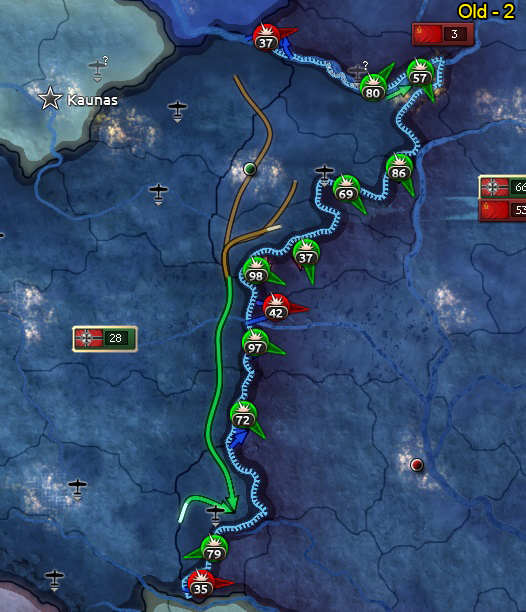 If we look at the screenshots from the old version [Old 1 and 2], both Germany and Soviet are struggling with long reassignments of units that will be unavailable until they have walked the distance. Moving on to screenshots from a more current build [New 1] we can see a bunch of green arrows, but the long ones are not likely to complete before getting grabbed by something closer and the end province manages to get hold of another unit that does not have to walk as far. 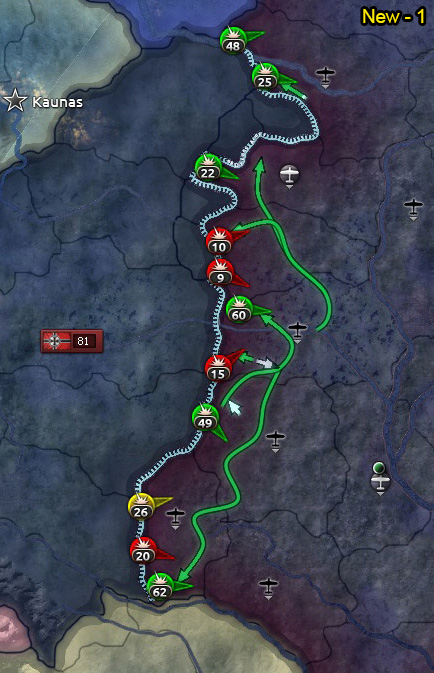 This can be seen in screenshot [New 4] and [New 5], taken just a few hours after one another. While it may seem like this could hurt entrenchment, over all it seems to improve performance by not locking units up in long move orders, meaning that units already standing in good positions are more likely to remain there than before. 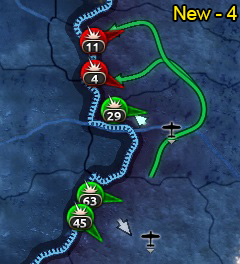 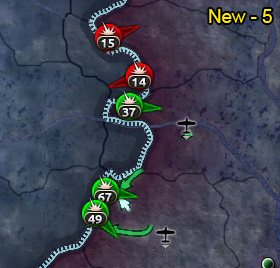 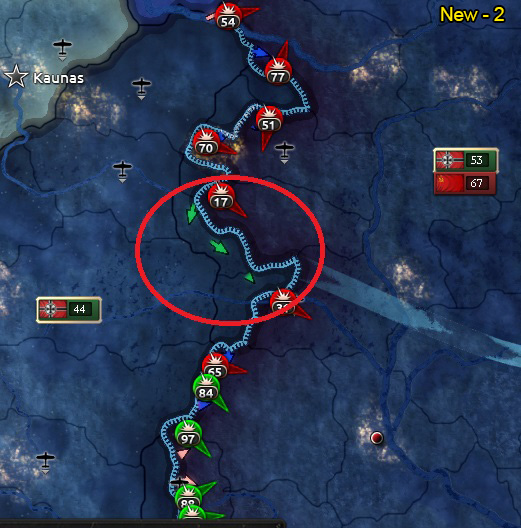 If we look at the German side we can see a great example of another important improvement to the system; units shifting to the side in stead of keeping a unit away from the front for a longer travel [New 2]. This change means that under some circumstances it may look messy, but in reality it is a coordinated move that makes units over all move much shorter distances. 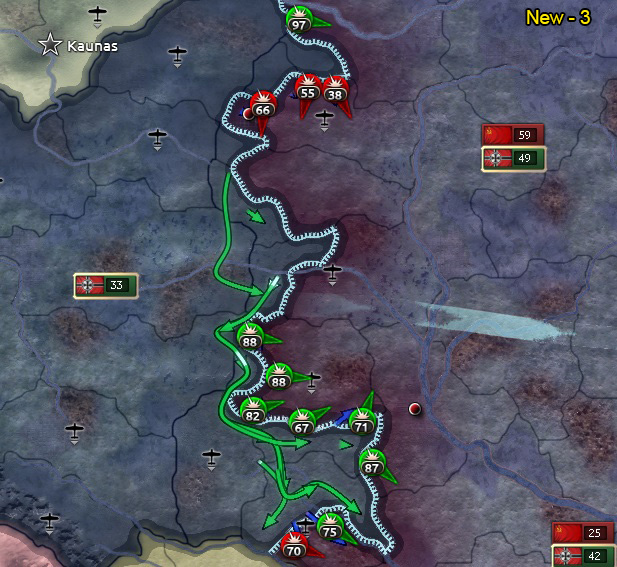 A seemingly messier example can be seen in [New 3], which ends up resolving the rebalancing faster than before and keeping the units on the front more.

This is certainly not the only thing we have worked on. Another noticeable change is that expeditionary forces have been significantly improved. This turned out to be one of Germany's greatest weaknesses; once France had fallen it would send a large force to Italy who would send them to starve in Africa. The AI is now much more sane in these decisions, as well as areas like Africa has been made even less interesting to fight in.

Next AI update I will be telling you about a pretty large change for the AI; something we call Roles, and how it helps us get AI division design under control. Now back to @podcat !

For next week's diary its time to return to look at the new focus trees, and that means its Hungary's turn. Do tune in to the World War Wednesday stream at https://www.twitch.tv/paradoxinteractive with me and Daniel at 16:00CET. We will be going full "hot code!" mode and testing out the new Romania.
Last edited: Apr 26, 2017
Toggle signature
Reject reason to make the impossible possible!

Awesome work guys! I'm curious about the new air-mechanics though. Could you enlighten us a bit maybe? What is the biggest change? Or when will we get a dd about it? Thanks! keep it up!
Toggle signature
Valar Morghulis
Valar Dohaeris

Looks amazing. I love the new idea for country packs and I'm sure the fan reception will be much better. Great idea!
Toggle signature
Someone remind me to do an AAR of me playing as celts and such in the English Isles for CK2 where I fight the invading cultures! Or however that went historically

Looks nice! Will this expansion also be included in the Field Marshal "Expansion Pass"?
Toggle signature
“Move swift as the Wind and closely-formed as the Wood. Attack like the Fire and be still as the Mountain.” ― Sun Tzu, The Art of War

Awesome guys! Looking forward to the changes in Oak.

Looking good but a bit sad there is no Bulgaria yet
Toggle signature
"This is not a peace. It is an armistice for twenty years "
Ferdinand Foch 1919

What about a new command level? You had intimated that such a change would be coming.

The steam store page for DoD has a pretty interesting screenshot regarding Hungary and Austria, you should check it out.

I can't wait for the expansion and patch, everything looks really cool so far!

I am not, I'm not really here.

I am really glad to hear the equipment conversion has been added to the game. It was such a big part of Germany production.
Toggle signature
My Mods: Third Reich Events for HOI IV ,Third Reich Events [Sub-Mod for BlackICE]

Rinuh said:
The steam store page for DoD has a pretty interesting screenshot regarding Hungary and Austria, you should check it out.

I can't wait for the expansion and patch, everything looks really cool so far!
Click to expand...

That screenshot confuses me. The date on it cannot be accurate, surely?

@podcat is there any way you'll add a bunch of division template "historical" names to be used by AI when she creates new template ? Because I'm quite bothered to fight "Infantry type 1/2/3" or "Heavy tank type 5" when I'm fighting Germany.
Toggle signature
Honi soit qui mal y pense - an English kingdom overhaul

@podcat , why did you guys leave out Bulgaria? Will they ever get their own tree? And what was the reasoning behind including the Czechs? Just curious.
Toggle signature
CPU: I7 6700 @ 3.4 GHz Turbo Boost 4.0 Ghz
GPU: Sapphire RX 470 4.0 GHz
RAM : 16 GHz Ballistix Sport LT DDR4

Any reason Bulgaria is being skipped over? It seems weird you are adding focuses for every other minor Axis nation in the Balkans other than Bulgaria (or adding NFs for Yugoslavia but not Greece for that matter, although since this dlc was stated to be Axis themed, that is a bit more excusable)
Show hidden low quality content
You must log in or register to reply here.
Share:
Facebook Twitter Reddit Tumblr WhatsApp Share Link
Top Bottom