Jump to latest Follow Reply
Menu
Install the app
You are using an out of date browser. It may not display this or other websites correctly.
You should upgrade or use an alternative browser.
Hearts of Iron IV 37895 After Action Reports (AAR)
Show only dev responses

Hi everyone, time for this weeks Death or Dishonor and Oak Update dev diary. Today will be all about the improvements to the air warfare coming in the update. Some of you who were at PDXCON this weekend might have had a sneakpeek, but here are the details Speaking of PDXCON, I had a lot of fun meeting fans (but yikes my feet after 3 days), and look forward to next years!

Issues with the old system
When we started looking at the air warfare part of the game we felt that there was two main flaws: Transparency and Control. The system only really showed you information over very long time with graphs so it was very hard to understand what was going on and what you could do to improve things. Control wise it was a lot of work to select, organize and move wings around, not to mention having to open lots of airbase windows everywhere.

So what did we do? Check out this screenshot, it shows most stuff we have at once: 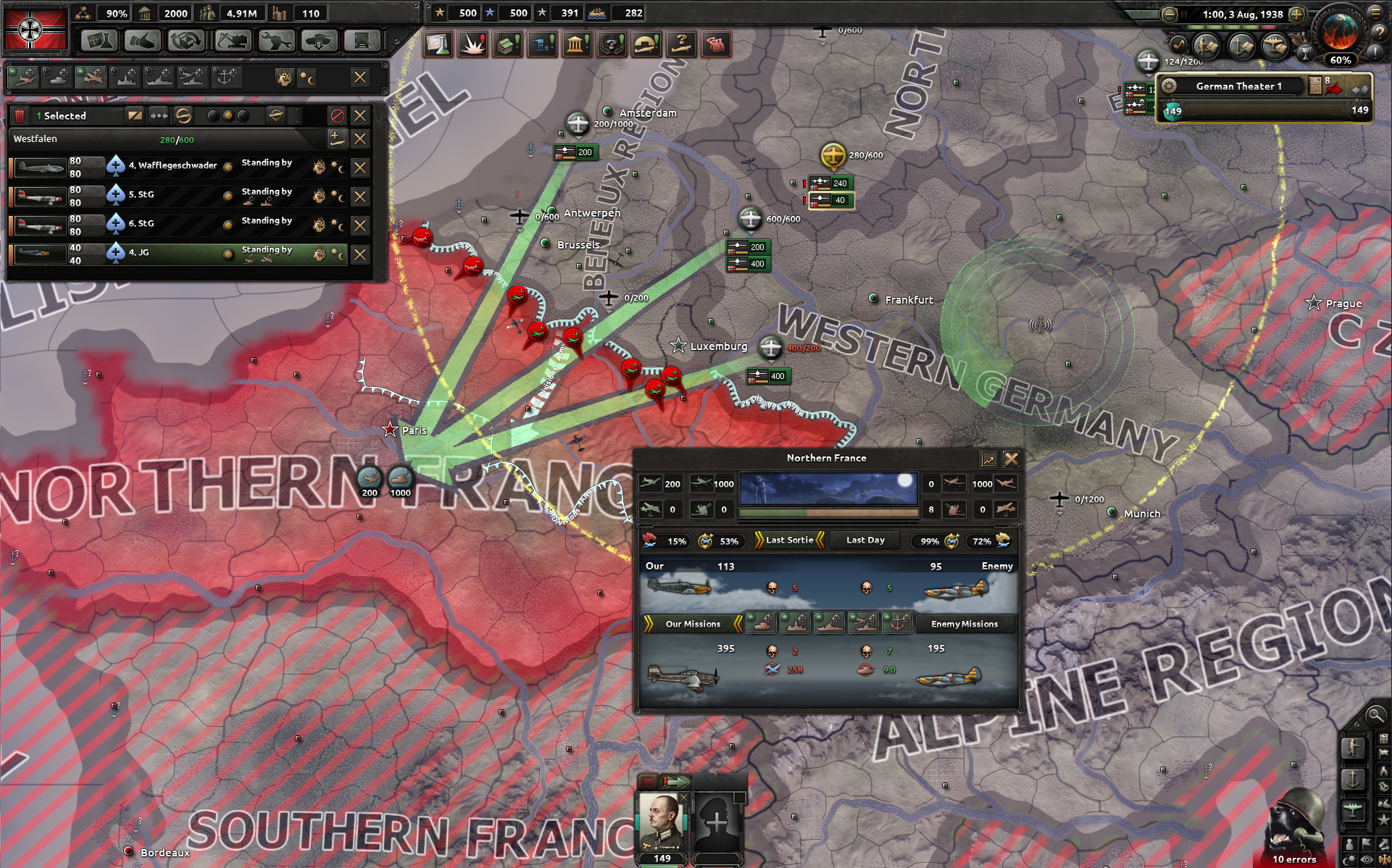 First of all we decided to go with something we knew would work well, making airwings behave more like divisions. They are now on the map and you can move them between bases and assign missions in a similar way to divisions and it’s easy to give orders to many things at once. Secondly we made a new air combat interface that should be a lot more helpful and informative. Keep reading to check out all the details... 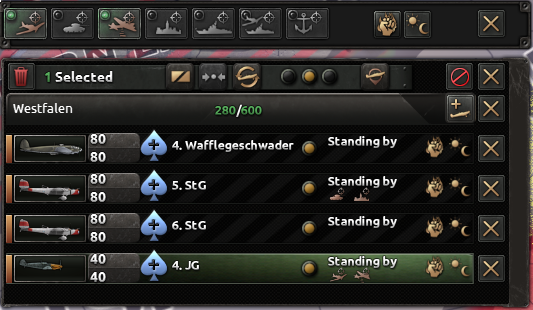 The air wing interface has been overhauled. The air base window is now gone. Instead, when clicking on an air base, the air wings will be listed on the left, like army divisions would if you selected ground units. We also added the ability to drag a selection box over several air bases to be able to give orders to all of them at the same time.

The list of air wings shows relevant information about the air wing, such as its strength, type and missions it’s currently flying. 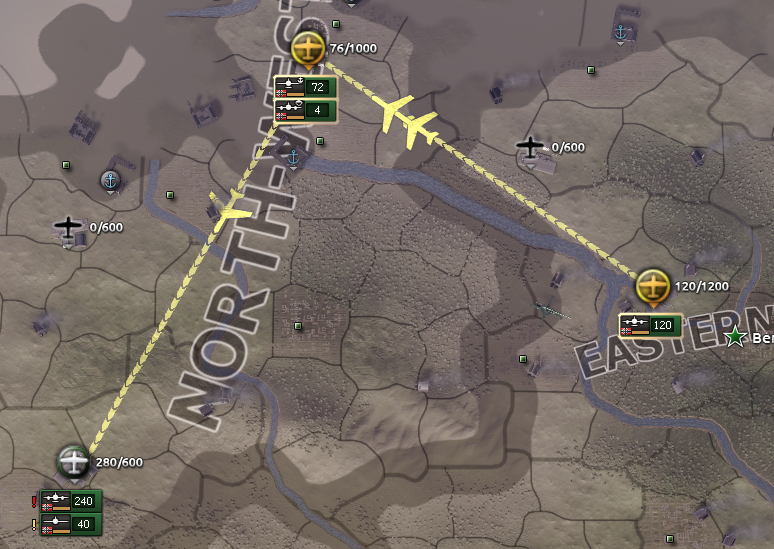 Relocating wings to a new airbase is easily done by just selecting them and right-clicking on a new airbase. We’ve added arrows to show that an air wing is relocating and its progress.

Assign Air missions
Above the list of air wings is the mission panel. To give an air wing a mission in the new system, click on the missions icons in the panel, and right click on the target air region on the map.

As before, wings will only fly missions that are suitable to them. This means that it’s possible to select both air superiority and bombing missions with a mix of air wings. The fighter wings will perform air superiority missions and the bomber wings will, unsurprisingly, provide bombing. This change should make it a lot easier to manage orders for several air wings at the same time and reduce the need to micromanage the air units.

Another thing you might have spotted in the first screenshot is that we now have special combat icons in air mapmode. These show by base color how it's going (sorry Germany) but also which side is getting air support, so a green plane with a + means they are getting help from the boys in the air. 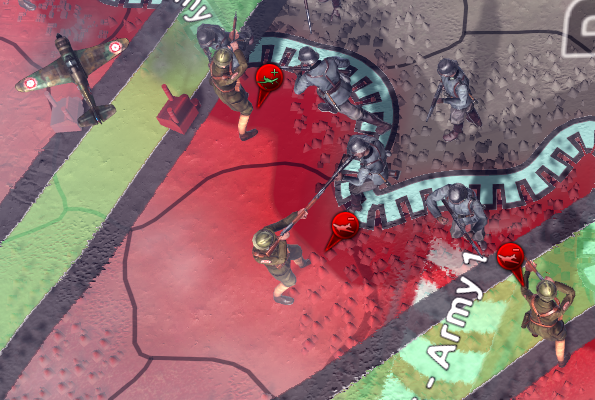 Air Combat Window
As you may have noticed, selecting air wings does not automatically bring up the air region window. This is because we have changed this window into becoming the new air combat window. 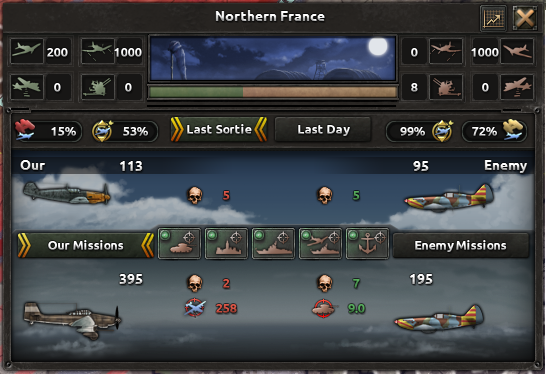 The new combat window provides information on air combats in the past day, or from the last sortie. The top of the window shows the familiar information from the old air region window, but the bottom shows the new air combat overview.

The overview is divided into air superiority missions, where fighters battle against enemy fighters, at the top and in the bottom half we show you bombing missions and intercepts. This information can be filtered by mission type, and toggled between our missions and enemy missions.

In the top part you might recognize two new icons. Those are for Air Detection. It's such an important value that we felt it best to move from tooltips and show that instead of radar (which is just one of the factors affecting detection). We’ve been rebalancing a bunch of that stuff too, but don't look too closely on numbers as its in progress.

You may also notice that we’ve added some other useful information. A very important stat is the disruption. This refers to air missions that have been forced to divert back to base, for example due to taking damage from intercepting fighters.

Radar
You might have spotted a little green circle in the first screenie also. We've added more visible radar overlays that you can bring up either through a toggle or by hovering over one 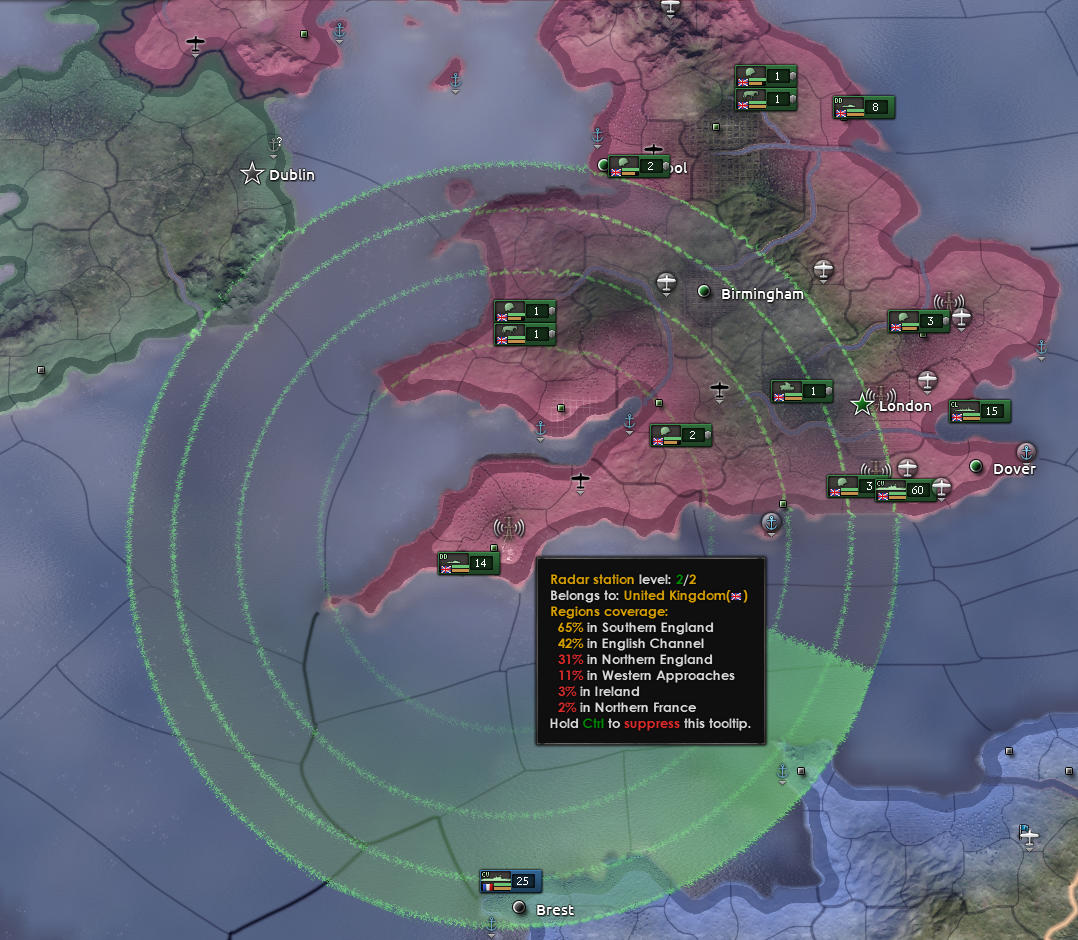 Oh yeah, for those who want to see all the new on-map air counter icons here you go: 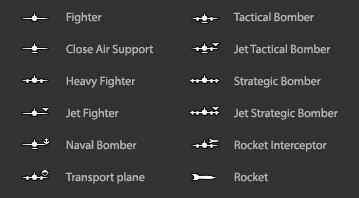 As is normal in game development you only end up having enough time to do half of the things you planned from the start, so see this as the first step on air improvements as well. More things are sure to follow in the future, but we are pretty happy with this progress

Next week we’ll be taking a look at Yugoslavia. See you then!
Last edited by a moderator: May 17, 2017
Toggle signature
Reject reason to make the impossible possible!

I'm so happy air gameplay is being looked at.

Wow this will make managing the Air war so much better!

Congratulations, you made Air Combat sexy!

Also, did you fix that rocket site glitch where it says rocket sites are in a random province even in '37? @podcat Thanks for great news.

But now guess what we will demand? Right - fleet. Greatness of air warfare is restored, now it is turn of the naval one.

Oh my god it's beautiful.

Question:
Do wings still "teleport" to air zones or do they pass all zones between airfield and target?

yeah we didnt have time to resize them unfortunatly, but we really want to. Maybe for a future patch
Toggle signature
Reject reason to make the impossible possible!

Thanks podcat, the new interface looks nice.
I'm all in favor of using similar display / rules for Land / Air / Naval units, as the division system could fit quite well for all.
I'm looking forward to trying this out ingame ! Cheers
K

Looks good! Have you made any mechanical changes?
Toggle signature
I play Crusader Kings 3, Kaiserreich and TNO o/

Looks good
Toggle signature
"I cannot feel that a man-of-war is a proper place for a Chaplain...it seems to me uncommon odd, and precious near to cant, to tell the ship's company of a man-of-war with loaded guns to love your enemy and turn the other cheek when the ship and every man jack aboard her is there to blow the enemy out of the water if he possibly can. Either the hands believe it, and then where is your discipline? Or they don't and then it seems to me to come hellfire close to mockery of holy things" Jack Aubrey

This is mainly an overhaul of the UI, right? Two things I was hoping that were going to announced were the fixing of the teleporting of air wings to the target province and back (eg you can't intercept bombers on the way to the target) and most importantly to me, the training of air wings/gaining of experience.

Is this something that is being considered for the future?

Looks great. I love the change to air wings as units. Two questions
1) Can we train the air wings, like land units ?
2) To build an unit, can we now select how many fighters, tac bombers, etc... we want instead of selecting planes already in reserve ? That would be great !

Looks outstanding, can't wait to try it out.
Toggle signature
Nothing speaks about willingness to accept slavery like trait described with words "We stand truly equal".

Great stuff, can't wait to get my hands on the new patch!

One question, in that radar screenshot, I'm assuming those values are just the coverage of that one radar station. Is there a way to see the total coverage of an area from all radar stations? Even if it's just visual.

Also, in that same screenshot, what's that little blue flag next to the airfield in France? I don't see it anywhere else.
Toggle signature
​