Menu
Install the app
You are using an out of date browser. It may not display this or other websites correctly.
You should upgrade or use an alternative browser.
Hearts of Iron IV 36712 After Action Reports (AAR)
Show only dev responses

Hi everyone and welcome to another dev diary where we show off stuff as we work on Waking the Tiger. Today we are going to be talking about a feature I’ve been wanting for a long time - troop acclimatization.


Acclimatization
We have long wanted to simulate the problems associated with shifting troops to new fronts with more extreme weather they are not used to. We currently have two types: Cold Acclimatization and Heat Acclimatization. It is not possible to be acclimatized to both at the same time, so if you take troops from the desert and put them down in the Russian winter, they will need to “work off” their heat acclimatization first before they start getting accustomed to the cold. When a division is sufficiently acclimatized, it will change its look, as you can see below. On the left are troops in winter with no acclimatization and on the right is what they will look when acclimatized. 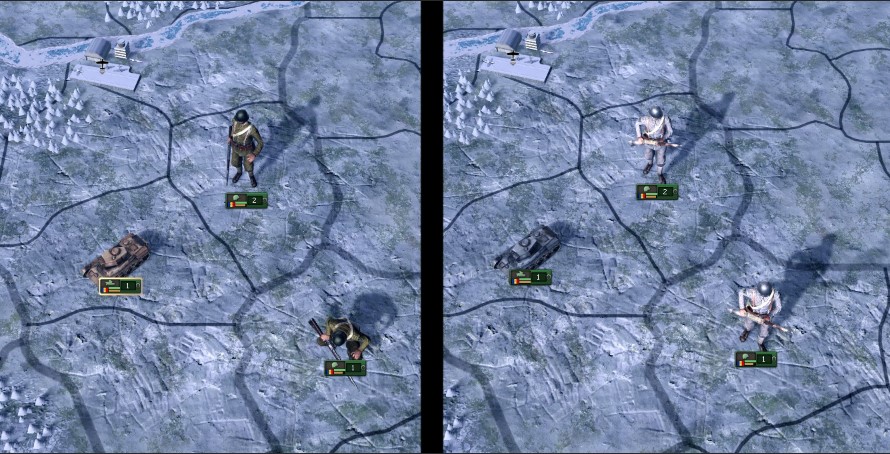 And an example from Africa: 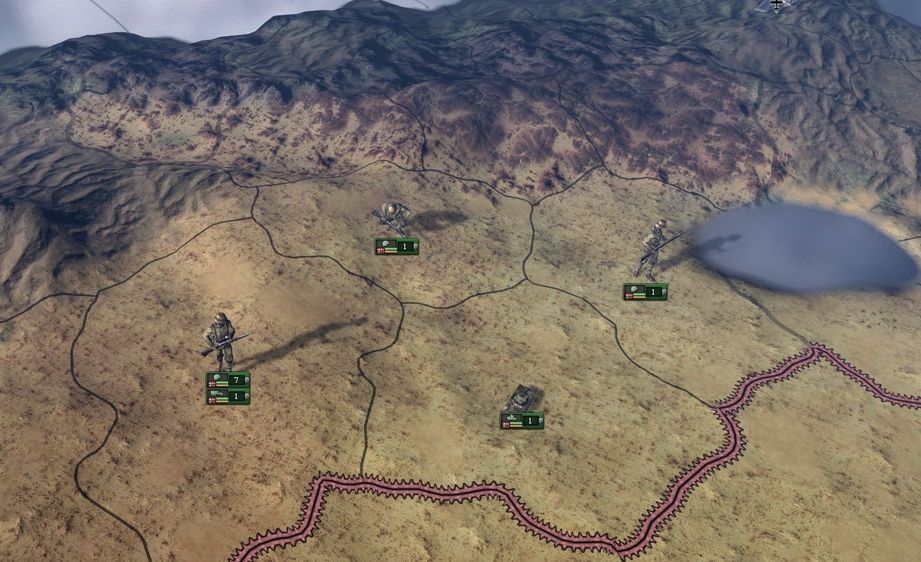 For most countries, we do this by switching the uniform on the 3D model to use more appropriate textures. In some cases, like where people only had tropic uniforms with short pants and the like, we replaced their uniforms to be more winter appropriate (suggestions by the art department to simply color their knees blue were sadly rejected). The new textures come with the DLC, but the core mechanic is free as part of 1.5 Cornflakes. You can see your acclimatization status as part of the unit list and its effects: 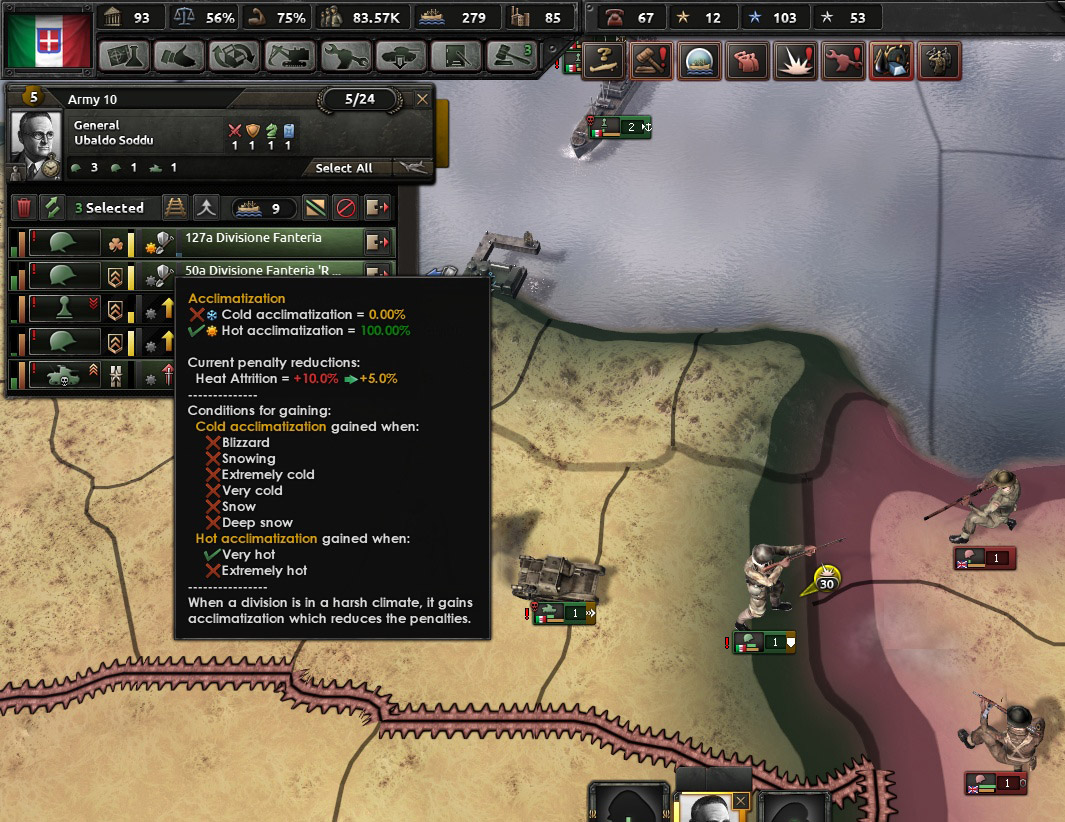 With full acclimatization you will reduce extreme weather penalties by about half. We will also be increasing the impact of harsh weather a bit to compensate for being able to avoid it now.

There are a few things that will help you gain acclimatization also. If your commander has the Adaptable trait or Winter Expert it will speed things up. There are also technologies that influence the acclimatization speed (more on that later). 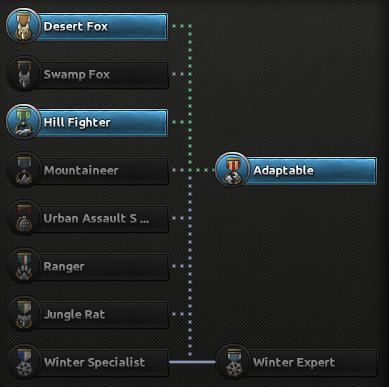 Special forces
Up till now, we have had a bit of a balance issue with Special Forces (Marines, Mountaineers, Paratroopers). They were, pound for pound, better than regular infantry and many people simply replaced all their infantry with mountaineers.

To make sure special forces stay special, we added a restriction based on your whole army:

To ensure that you always know how many special forces you can field, the division designer and deployment will help you keep track:

Along with this change in how Special Forces work, we wanted to make them stand out a bit more. Six new infantry technologies have been added to improve these elite troops.

Special forces are trained and equipped for conditions that ordinary soldiers aren’t expected to excel in. The first tech will give them a boost to acclimatization speed. Afterwards, the tree splits. One option is to train your special forces harder, to improve their skills and their ability to fight for longer before having to be resupplied. The other option is to expand the special forces training programs to accept more recruits. Your special forces will be more numerous, but come with more drag and not quite as high speed. In the end though, they will still be elite forces and will be able to develop training to make them even more skilled in fighting in the harshest of conditions. 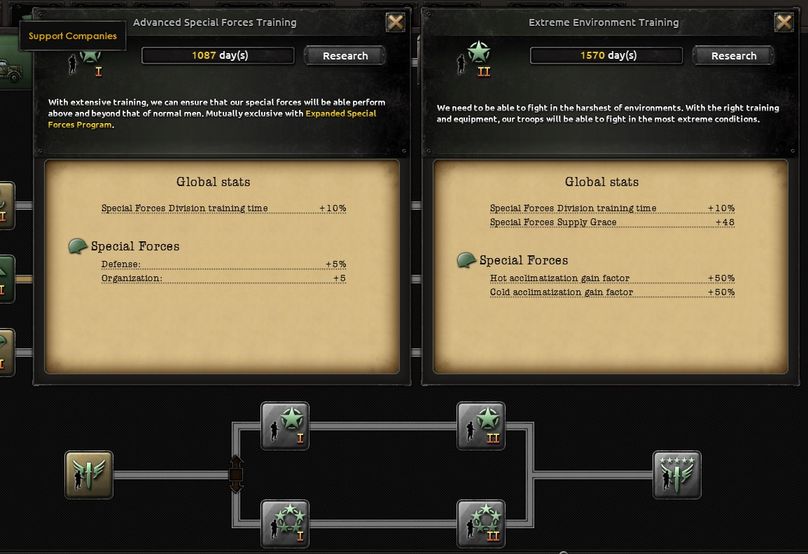 See you all next week when we return to take a look at the Chinese warlords.

Also, don’t miss out on World War Wednesday today at 16:00 CET as normal. Me and Daniel will continue our fight against communism (or the British fleet… we are still arguing about that) as Germany under the rule of the Kaiser.
Toggle signature
Reject reason to make the impossible possible!

“What’s the point of buying Pdx games/dlc if not for the forum badges?”

So can i still use Mountaineers in my infantry divisions?

A bit disappointed that there still isn't new special force types, though. Such as rangers (forest/jungle) or desert fighters.

Alevir5 said:
So can i still use Mountaineers in my infantry divisions?
Click to expand...

Yes, but you can't build an unlimited amount of those divisions.
F

Hmm... so I can switch my troops straight from the desert to the jungle and no acclimatization is needed?
Toggle signature
Interested in a Southern Victory mod for HOI4? Go here.

Also, so good to see that special forces are now going to be special. With them being limited the immersion factor goes up hugely, and some real choices about whether mountain, marines or para.
Toggle signature
"You can live for months without mail; for weeks without food; for days without water; for hours without POL; but you cannot live for seconds without ammo."- Combat Leaders and Lessons.

Glad to see finally being in place little is worse than winter warfare.

For special forces will commandos etc come in the future? Perhaps by using command points?

And I look forward to the coming stream
Toggle signature
Check out Long Live the Permament Revolution! A newly started Trotskyist Soviet AAR.

EDIT: Oh, I get it. This is a factor apart from terrains.
Toggle signature
It is too easy to love a nestful of cats but too hard to raise all of them.

"Democracy is the theory that the common people know what they want and deserve to get it good and hard."

Will countries like Greece and Italy get spirits to boost their cap on mountaineers? Or something similar for countries with a lot of a particular terrain?

Will certain nations have bonuses to allow them to have more mountaineers or marines?

Edit: Love this idea! Keep up the good work guys!

Sweet!
Toggle signature
Trust no one.
- Except me, I am a trustworthy person.
---
Our nation desires nothing but peace and prosperity and the protection of the little folk.
- Your indepependence will be perfectly preserved, as our loyal subject.

Do all countries have the special winter/desert uniforms or just the majors?
Toggle signature
Game of Thrones mod for HOI4

We really need much better tools for predicting, tracking, and counteracting weather.

I like the ideas about the special forces, it make them more... special.
BTW, how acclimatization is moddable ? Can we add acclimatization available for something else than weather. Terrains for example (jungle...) ?
Toggle signature
Honi soit qui mal y pense - an English kingdom overhaul

Will this be the last blow to JAPs already minimalized chances vs CHI?

- Achab​
Remember, by quoting myself I am paying homage to one of the greatest minds of all ages displaying my notorious humility in the process.