Menu
Install the app
You are using an out of date browser. It may not display this or other websites correctly.
You should upgrade or use an alternative browser.
Hearts of Iron IV 37063 After Action Reports (AAR)

So recently I came across this digitized report by the Finnish Research Centre of Geology (GTK) (in Finnish), and realised they had compiled a wealth of information in a nice Excel format that I had wanted to compile myself for several years now, but hadn't quite gotten around to it. What's more, their very long list of sources means they've covered not just the years relevant to HoI4, but everything between 1865 and 2002 as well (although 2001-2002 are lacking data for some resources, as the report was compiled in 2003). Of course for HoI4 purposes we're mostly interested in the 1930s and '40s, but I thought it worth mentioning. Anyway, so I downloaded all the Excel charts in the report and translated the chart that had general data for the production of the entire metal & mineral industry of Finland for 1865-2002. A lot of the lingo was difficult to translate, was unknown to online dictionaries, had no direct English equivalent and often used terminology no longer really used in the industry. I also generally kept faithful to the original Finnish wording if possible, which is why some of the translation might come off as a bit weird, but overall it should be comprehensible. Feel free to ask if there's any questions though. Also I should mention that whenever "Industrial Statistics" is mentioned in the chart, it means what numbers are in the yearly Finnish Industrial Statistics report, a kind of yearbook but specifically for the industrial sector.

In any case, the purpose of me sharing this is to help the developers better represent the development of natural resources in Finland during the game's timeframe, particularly as the historical development is currently absent from the game (Finnish nickel production in particular, which in real-life was very much a big deal to Germany), and the next DLC might seek to rectify that. And if any modders or historians find this data interesting, then that already has made this worth my while (and who knows, maybe the pre-1936 data could be useful in the next iteration of a certain PDX GSG beginning in the 19th century...).

For more specific information, like in which state/province to place XYZ resource and in what quantity and when, more information like the location of mines/facilities and their individual production is needed. I know where to find at least some of that (in fact the full GTK report had a bunch of data on this too), it just needs to be translated. But for now I'm providing just this general data for the entire country.

Here's an example of what to expect from the file (figures are in tonnes unless stated otherwise): 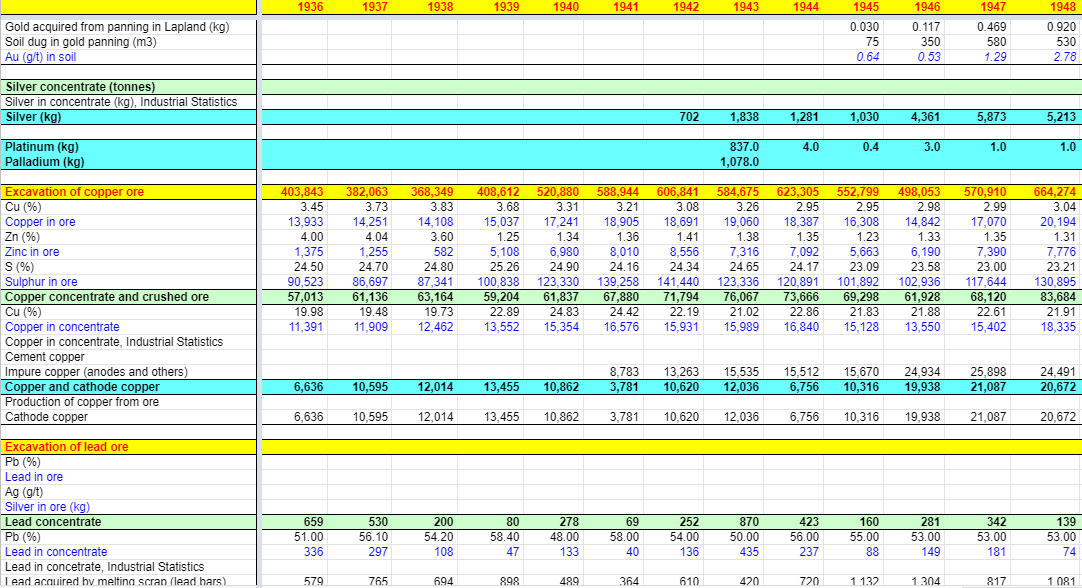 Last edited: May 3, 2021
Toggle signature
In 1939-44 the Finnish military destroyed or put out of action 1.5M-2M men, 3k-3.5k aircraft and 3k-3.5k tanks of its enemy, Soviet Russia, at the cost of some 294k men, 240 aircraft and 50-70 tanks destroyed or put of out action in combat. This martial effectiveness combined with the overwhelming materiel and manpower advantage the Russians enjoyed at nearly all times, makes it a unique achievement in military history.