*Health warning* I approved this aspect of the storyline with the mods before posting. Thanks to Qorten for the greenlight. But a very obvious health warning here to avoid any discussion of banned topics.

The advice I got from the mods was to follow the 'grandmother rule' - don't write anything that wouldn't be suitable for your grandmother to read.

A horrific way for us to bring Part Three to a close. We must not await to see what horrors Part Four has in store for us, and, god willing, perhaps some light too.


DensleyBlair said:
More dispatches from the terrifying descent into the abyss of fascism. I'll be intrigued to see whether Makarov can necessarily hold it all together himself, or whether he has "allies" who feel they might be better suited to call themselves Vozhd.

Vicky likes to do this, I think. In my Commonwealth game I got to host the Olympics five years after the revolution.
Click to expand...

And we've reached the bottom of the abyss here with mass deportations on a never-before seen scale. At this stage, Makarov is more vulnerable than he has ever been. His big political project has caused a raft of issues and the Republic looks very unstable. There will surely be some conspiring to bring him down. The question is what happens next.

I'm not sure I've ever played a V2 game where I wasn't given the Olympics!


Nikolai said:
Can no one stop Makarov?
Click to expand...

He's made it to the end of Part Three, a full 17 years in power now. We shall see if this is the end of the line.


Cora Giantkiller said:
It's odd to find oneself dismayed that the Pope and the Holy Roman Empire are insufficiently opposed to our beloved Poland... but Makarov is a menace and his evil regime must be destroyed.
Click to expand...

Our old enemies seem to have become the good guys in all of this, but both Pope and Emperor appear to lack the backbone to face down the Russian beast. Unexpected for sure to see the Americans come forth as our most forceful opponent, and through the consequences of their embargo bring about the gravest threats to Makarov's position since the civil war.


Specialist290 said:
Things only continue to get worse in Poland / Russia, even though paradoxically the country is probably at the height of its power at the moment. The average Pole or Russian might not see the worst of it so long as he keeps his head down and toes the party line, but the situation beyond the Brusilov Line is once again a ticking time bomb just waiting to go off, even if the Russian state has the upper hand for now with its technological dominance.
Click to expand...

Indeed, even with the economic problems of this era, some Russians will have done pretty well by feasting on the properties of the expellees. Even for Christians in the western provinces, at least prior to 1929, so long as you avoided anything political and didn't mind bending the knee your life could have carried on much as before.

And the situation east of Brusilov has become even more of a powderkeg than it was before with the addition of millions of imbittered refugees. We saw one explosion already, time will tell if more are to follow.


Ebanu8 said:
With how uneven industrial expansion is, its technological and economical advantages seem more like a house of cards.
Click to expand...

Indeed, some parts of the Republic are as industrialised at OTL interwar Western Europe at this stage while the eastern lands are more like OTL pre-revolutionary Russia.


diskoerekto said:
how awful did everything turn out to be! short of another revolt, I don't know how Poland/Russia can get rid of Makarov, and there's only 1-2 updates left

waiting on the edge of my seat
Click to expand...

what an ending to this part of the saga! The Felaket is more or less how my grand-grandparents found themselves in south of Turkey from Crimean peninsula (they escaped on the way to the East). Absolutely horrific, and HoI is not a game that tones down any horror, so let's buckle up for what's yet to come!

Good to see America take a harder line towards genocidal Fascism than it did OTL- though the victims being their coreligionists probably helped. I sincerely hope that we have reached the nadir of Makarov's atrocities, rather than just the shape of things to come.

Tip toe through the tulips...

And all the dead people...gathered round...

They all died due to deportation, of course.

I have to say, taking a step and looking at the story of this section as a whole, I find it really satisfying; and I can't wait to see what happens next.
Toggle signature
Cora (she/her/hers)

Power to the strikers, death to the fash etc etc etc

I remember you saying Normandy would get its moment in the sun. What a way to make a mark on the European stage!

Even if I can’t say I’m precisely looking forward to part four, it’s obviously through no fault of your storytelling Tommy. Rapt to see how it all unfolds from here (hopefully with makarov moving ever closer to that service station…)
Toggle signature
⋆ ⋆ ⋆ A PEOPLE'S HISTORY OF THE COMMONWEALTH OF BRITAIN ⋆ ⋆ ⋆
Echoes of A New Tomorrow: Life after Revolution, 1925–69 ⋆ After the Echo: Crisis and Renewal, 1969–93 (Coming 2021!)

DensleyBlair said:
Even if I can’t say I’m precisely looking forward to part four, it’s obviously through no fault of your storytelling Tommy. Rapt to see how it all unfolds from here (hopefully with makarov moving ever closer to that service station…)
Click to expand...

Well, that crashed spectacularly. A great read, but it is sad to see a once great state fall to pieces like that.
Toggle signature
In the name of God and Ethiopia, we charge forth to rid our land of foreign invaders! Fight with me, countrymen! Fight with me, sons and daughters of Ethiopia!

Without getting into specifics, in accordance with the topic warning: I have a feeling that things are going to get much, much worse for Poland / Russia before they get better any time soon.
Toggle signature
Member of the Ahistoric Association | Bearer of one free pass to History Park and owner of a free promotional t-shirt | Bestower of Red Special Cookies ● (What are they?)

I'm happy to announce that Part Four is now open in the Darkest Hour subforum! 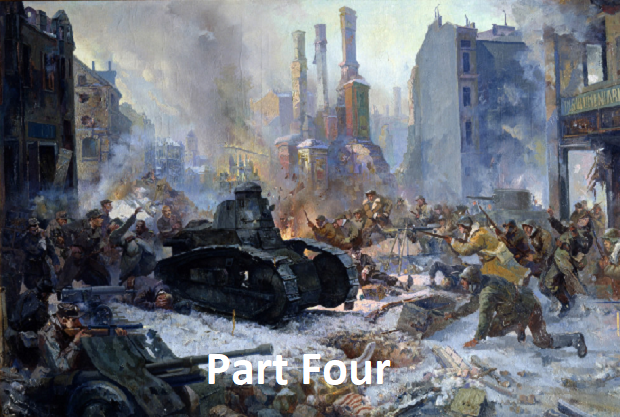 Well this ended on something of a low point to say the least! All that remains is to see what part four has in store for us all. I do love Darkest Hour so I have high hopes!
Show hidden low quality content
You must log in or register to reply here.
Share:
Facebook Twitter Reddit Tumblr WhatsApp Share Link
Top Bottom