Jump to latest Follow Reply
Menu
Install the app
You are using an out of date browser. It may not display this or other websites correctly.
You should upgrade or use an alternative browser.
Hearts of Iron IV 42142 Bug Reports 13059 After Action Reports (AAR)
Show only dev responses

Hi everyone and welcome to the 60th dev diary (wow). This week we released Hearts of Iron IV! Initial reception seems to be great. Good reviews and a lot of players playing the game! The team is really pleased with what we have accomplished!

The most played minors seems to be China, Poland and Turkey.

Hotfix 1.0.1
We have been working on a hotfix patch for solving some performance issues and crashes that have popped up. It is still an optional beta patch, and I expect we will make it available for all on monday. If you have issues listed below and want to try it out go here to check things out early: https://forum.paradoxplaza.com/forum/index.php?threads/hoi4-1-0-1-hotfix-beta-patch.945139/

Changelog for that is:


Here are some cool portraits @Sideburnout has been adding to the patch to flesh out minors: 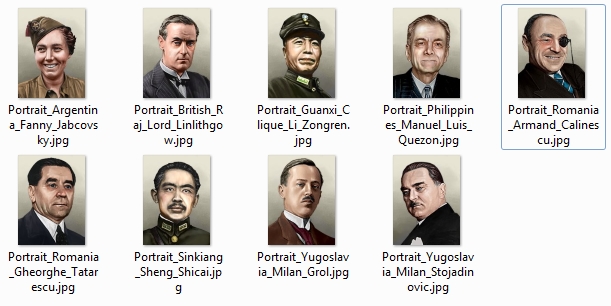 Right now we are working on the first proper patch that we plan to release just before vacation in july. You will get more detailed info in coming weeks but the main focus will be:
- AI
- Air warfare balancing
- Making sure invasions are harder to pull off, easier to defend against and more cleverly done by AI
- Improving peace conference scoring
- Quality of life interface improvements
- Bug fixing

Enjoy the game and we'll try to keep up with the amazing activity here on the forum!
Last edited by a moderator: Jun 14, 2016
Toggle signature
Reject reason to make the impossible possible!

I thought you guys will chill a bit post release but amazing to see that you're already working on improvements for us!
Reactions:

lolciokuba said:
I thought you guys will chill a bit post release but amazing to see that you're already working on improvements for us!
Click to expand...

Reason for releasing on mondays, or so I have been lead to belive.
Toggle signature
I alone have the right to use my avatar!

Thanks for a great release! Looking forward to following this game forward. My neighbors are probably starting to worry over the Panserlied playing 24/7 from my apartment though.
Reactions:

podcat said:
France can now send volunteers to Spain if they choose the Support Nationalists focus.
Click to expand...

What about supporting the Republicans?

Also, please switch the colors back to how they were in older games... yellow for Nats, and orange for Reps (and default Spain).
Toggle signature
Always outspoken, never outpunned.
Reactions:

Thanks for the beta patch, though I don't personally need it.

For me, HOI4 has been the best 1.0 release I've played from Paradox.

I do greatly look forward to the UI scaling, UI improvements, and AI improvements. The game is currently very fun, but it could easily become my favorite Paradox game with some polish.
Toggle signature
BlueThing from the HBS Battletech game forums.
Reactions:

Before the minors, give some love to parties in Italy that are not fascist!
Reactions:

have you guys noticed that the german ai on historical mode often attacks switzerland and/or finland?

A few hands-off games will probably have it happen
Toggle signature
rest in peace evw
Reactions:

Re Top nations played:
So you're spying on us?
Toggle signature
...
Reactions:

This and brainless naval invasion should be on the top of the list!
Reactions:

Firstly, I like the game tough I have to "unlearn" my HOI3 reflexes. Once you catch how things works (like defining fronts or drawing follow-up attacks) its quite good.

Now some things can be balanced/enhanced.

Some balancing of seemingly overpowered port strike should be considered in the Air Warfare balance.

And Naval Warfare balance? Submarines also seems a bit overpowered against ships (against convoys is OK).

And what about avoiding AI naval doomstacks (as well as human ones), notably with growing penalties (diminishing returns) ?

For the record, I met a 134 ships Italian fleet who sunk 24/27 of my ships, without losing a single destroyer.

My priority would be to make the divisions selected more visible over the others. Now we barely see which ones are chosen.
Last edited: Jun 10, 2016
Reactions:

I wouldn't say the reception has been great. There's been a lot of criticism by users and reviewers alike.
Toggle signature
PDX, please address this small border inaccuracy in Victoria 3
85% of the Soviet armoured vehicle park on 1.1.1936 is missing from HoI4 (updated to NSB)
Finnish metal & mineral production 1865-2002 (needs updating to include excavation sites, years of operation and locations in relation to Vicky 3 & HoI4)
Finland's total combat casualty tally against the USSR in 1939-44, inflicted vs. lost: 1.2-1.4M men, 3.5k aircraft and 3,678 tracked AFVs, vs. ~294k men, 240 aircraft and 50-70 tracked AFVs.
Reactions:

Great game release and loving that you guys are on top of the bugs! Very much looking forward to upcoming DLCs and patches to make the game even better!
Toggle signature
"You must not fight too often with one enemy, or you will teach him all your art of war." Napoleon Bonaparte
Reactions:

Amazing launch guys. Loving the game, I have played and lost two italian campaigns, failed one Argentina campaign, and have another argentina fascist run going right now where I have killed about 80 divisions of Americans while trying to unify the continent. It has been absolutely glorious! Thanks so much for changing the names of the different Argentina post revolution counties! All of this on Ironman!
Reactions:

I didn't bought this yet (too expensive+finals starting) but looks sooooo fun.
Glad we have more portraits, now I can play as a romanian pirate, yay.

Hope that in the time I buy this game, we will already have a fleshed out game.
Toggle signature
Every war is the result of a difference of opinion. Maybe the biggest questions can only be answered by the greatest of conflicts. - JC Denton

dasVerruckteJoe said:
have you guys noticed that the german ai on historical mode often attacks switzerland and/or finland?

A few hands-off games will probably have it happen
Click to expand...

Keep up the good support devs

/Marine
Toggle signature
"The deadliest weapon in the world is a Marine and his rifle."
Gen. John "Black Jack" Pershing, U.S. Army
Commander of American Forces in World War I

“Semper Fidelis”
“Always faithful,” the motto of the Corps adopted in 1883.