This weeks topic is brought to you by the embedded Quality Assurance on Hearts of Iron IV, and how we work. My name is Distantaziq and I'm one of the two embedded QA on HoI4. My partner is currently in flux, but at time of writing and until HoI4 is released it is Da9L who holds the position, or maybe you know him more prominently as the person who put the ”Y” in ”Yermany”.

Quality assuring a game is much like quality assuring any other piece of software, except in an arguably more creative setting. If you’re thinking of getting into the business “to get to play games the entire day” you’re more or less signing up for “a fun safari trip” while you’re really enlisting to the corps.

The Quality Assurance department in Paradox Development Studios is divided in two parts; Embedded Testers, that are a part of the project's development team, and Central QA that are more fluid as they jump between the titles.

Central QA are more generalists, and jack-of-all-trades. While the embedded testers are the first to test out all the new features, balance changes etc, the testers in the central group are able to support the embedded testers by providing with more long term gameplay testing, and a “fresh” perspective on things and catch anything that might have slipped through.

The Embedded QA are the true experts in their respective projects. As was mentioned above, we are the first ones to test out any new changes in the game, in order to see any possible problems with the changes, if they are entertaining or not, and provide this feedback to the projects producer/project lead.

We also have the opportunity to specialize in various areas. If we take Da9L as an example, he is the resident expert on AI, which means that a of the project leads can request him for a certain amount of time to have a sweep of the AI, or maybe see how the AI handles the new DLC features that was just implemented.

As two QA who are solely on HoI4 we are a part of the development team and our three main purposes are to assess the risks of the project, monitor the activity/numbers on our bug tracking service JIRA (and subsequently regress the issues) and give continuous feedback on the project, if something works better/worse and why/if it needs to be changed.

The risk assessment is where we analyze the project’s status that week, and pin down specific issues that we think (for instance) are destabilizing the build, or are crippling the AI/other essential features. We also take the time frame into aspect, if we have enough time to assure the quality of implemented changes before deadlines, and/or if a so-called “feature creep” is attempted.

If everything is working smoothly we don't really have anything to report that week, but there are usually crashes or other issues that are worth taking note of for the project leaders and managers.

Regression as such involves reading resolved JIRA issues and getting into the problem at hand and checking if the issue still exists in our latest version (which is why it’s so important when you report bugs to note what version you encountered the issue in). If the issue is fixed, we close the issue and help it pass on to the other side.

Every week we schedule multiplayer with the rest of the HoI4 team to make sure all multiplayer features are up to par (so far pretty good!), and in a perfect world we also get some scenario testing done, to uncover issues we might not have noticed otherwise. (Since one of the most dangerous things about being quality assurance is getting comfortable and losing your edge by following the same motions when you enter the game.)

As you can imagine, working on such a vast game as HoI4, our days are a blur of keeping track of bugs and trying to make sure none of the more severe bugs slip through the cracks.

Like that one time when Soviet had a coup trigger on them that turned into a civil war, and both sides ended up nuking each other to bits (needless to say, the AI received a lot of restrictions on their nuclear usage after that).

We’re therefore really grateful to the betas who provide observations and help testing the game to make sure it’s providing entertainment for as many players as possible.


Enclosing some tidbits of weird things that we've seen throughout the development process: 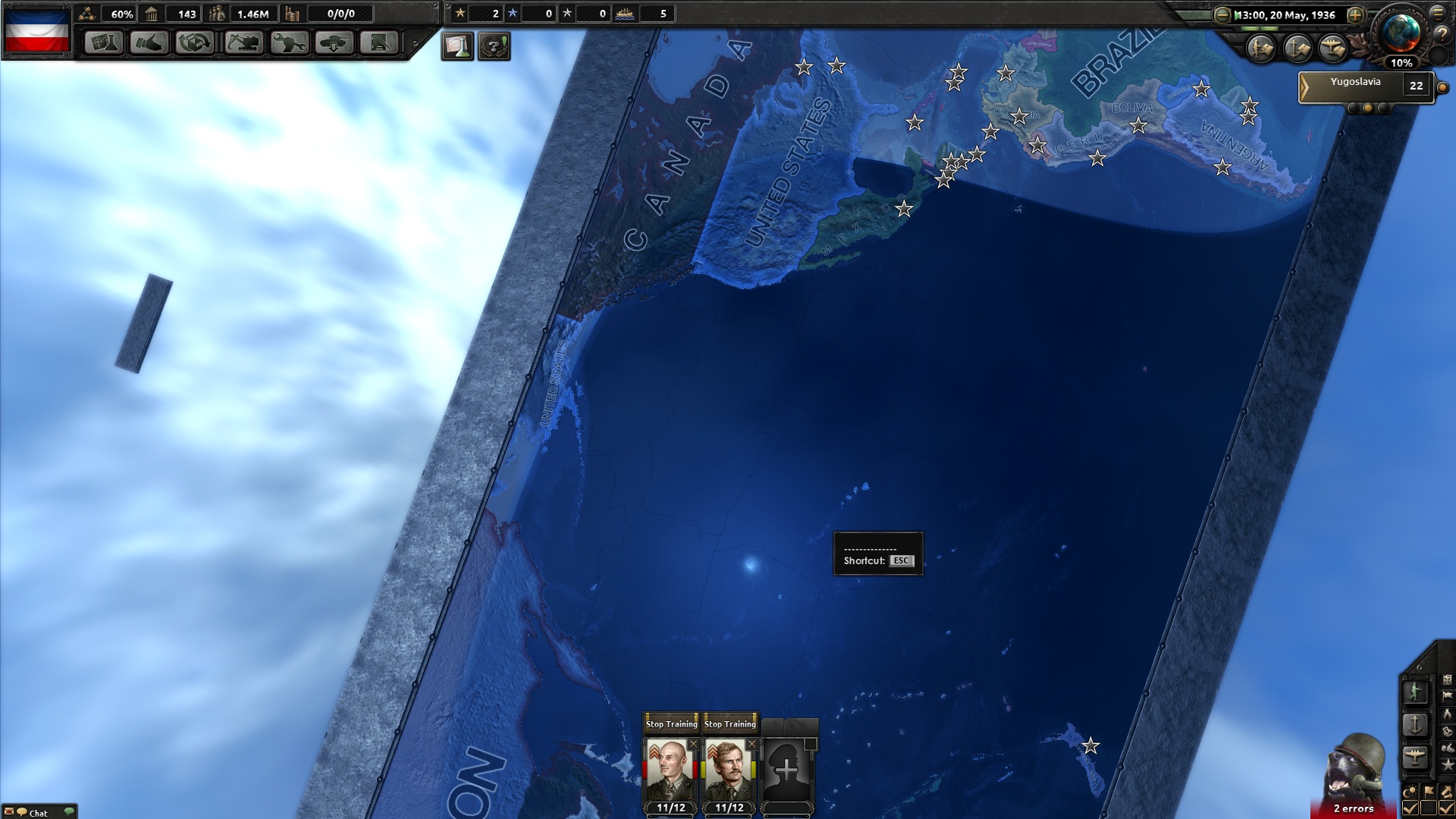 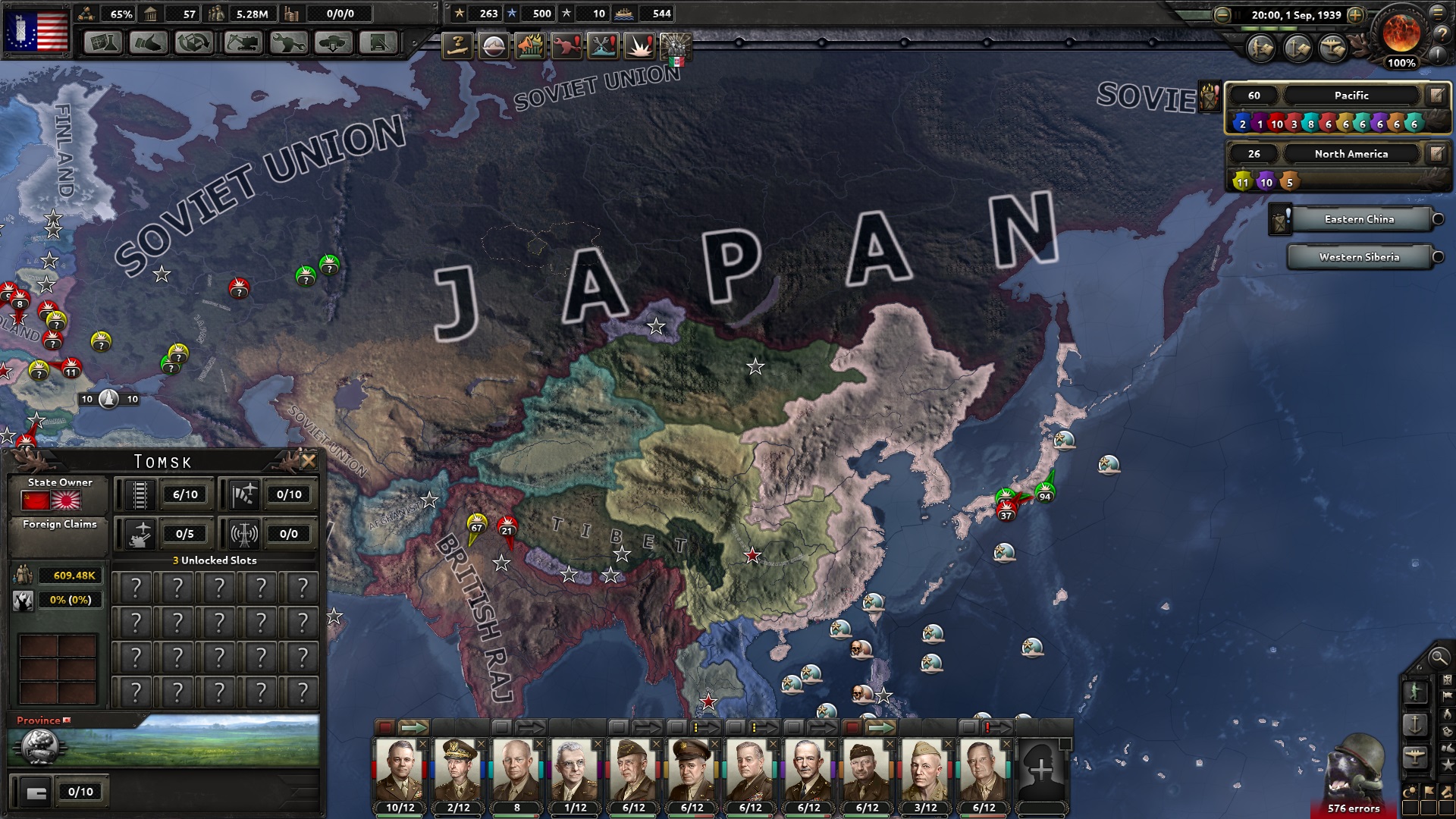 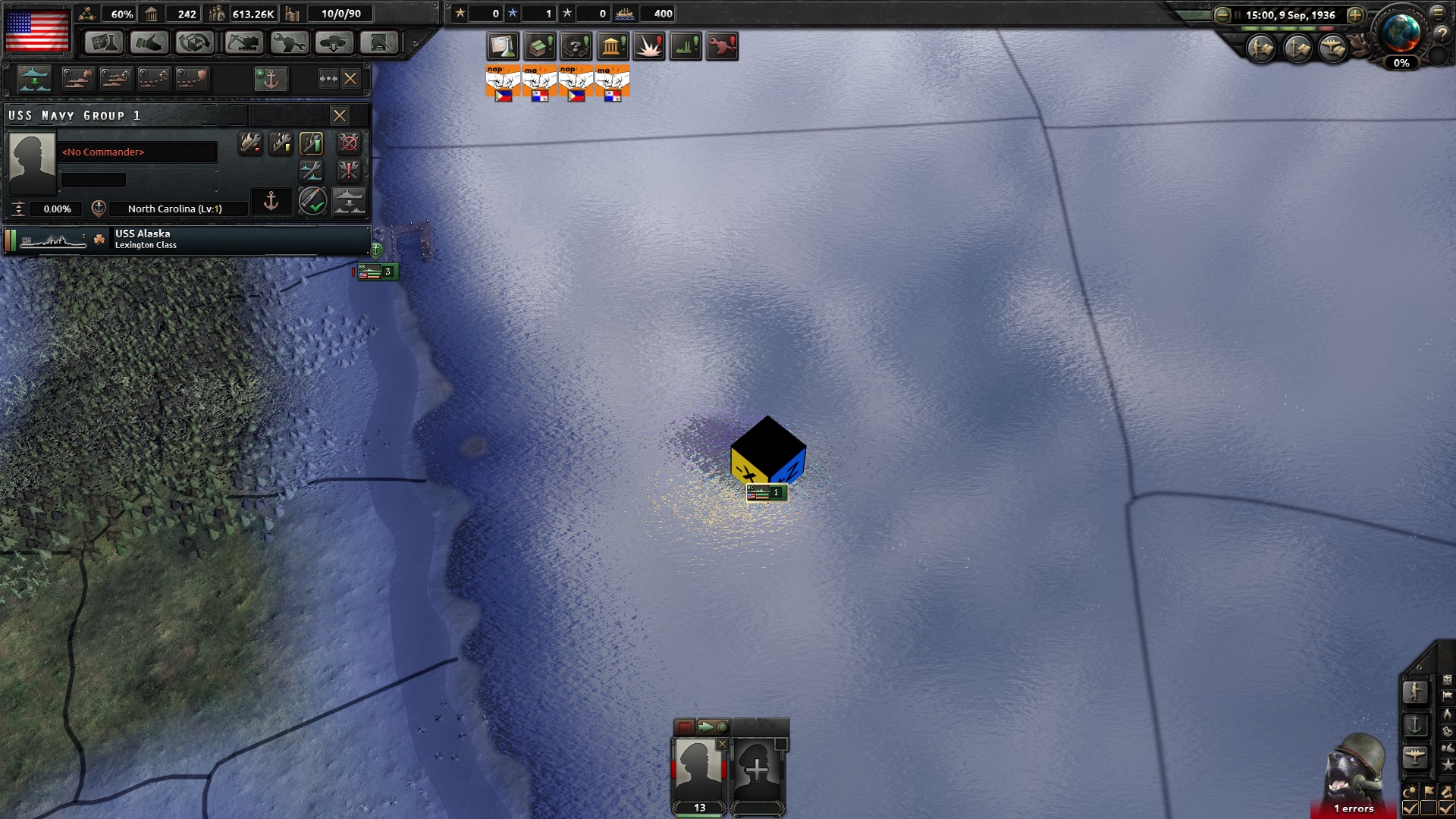 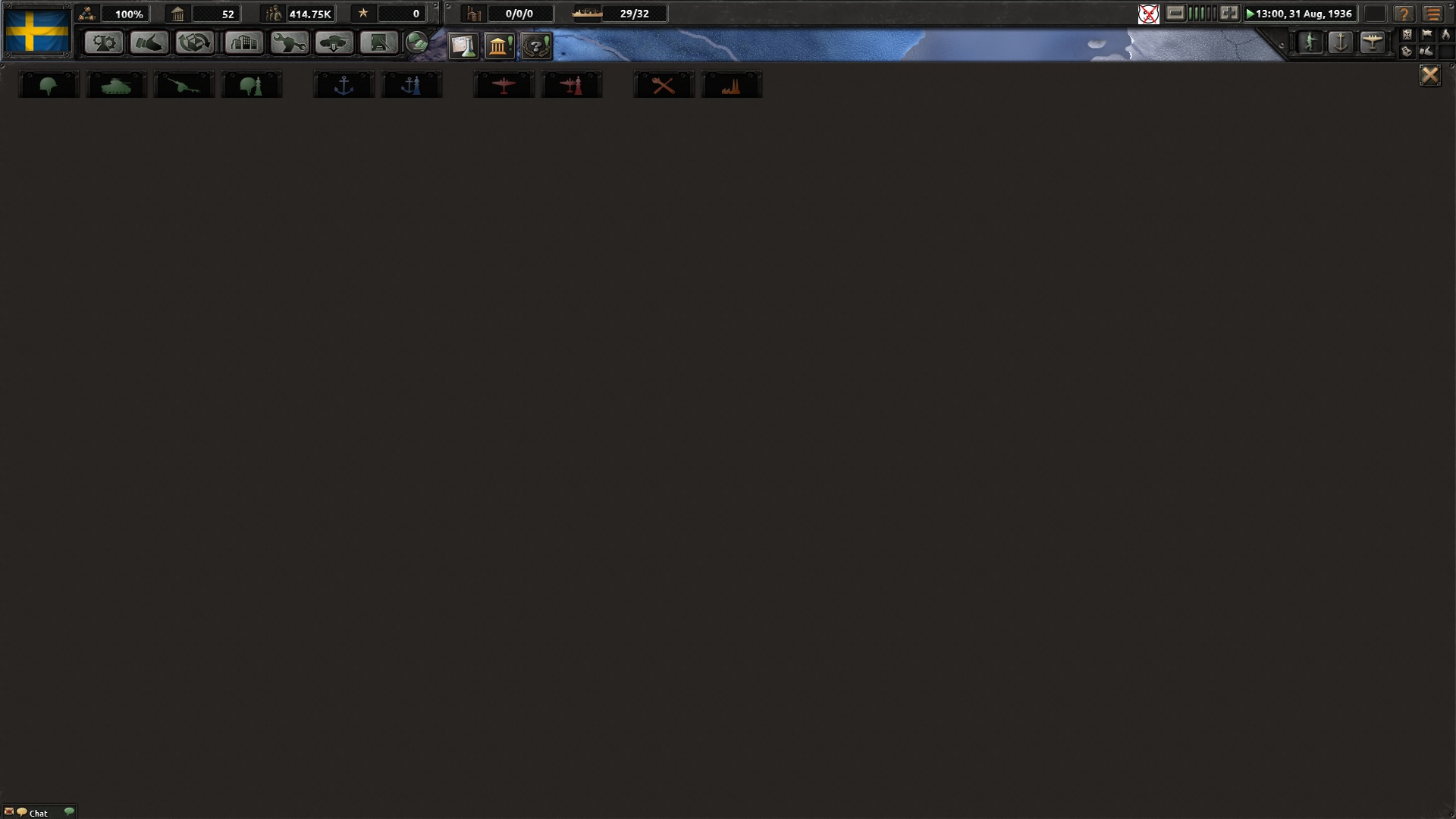 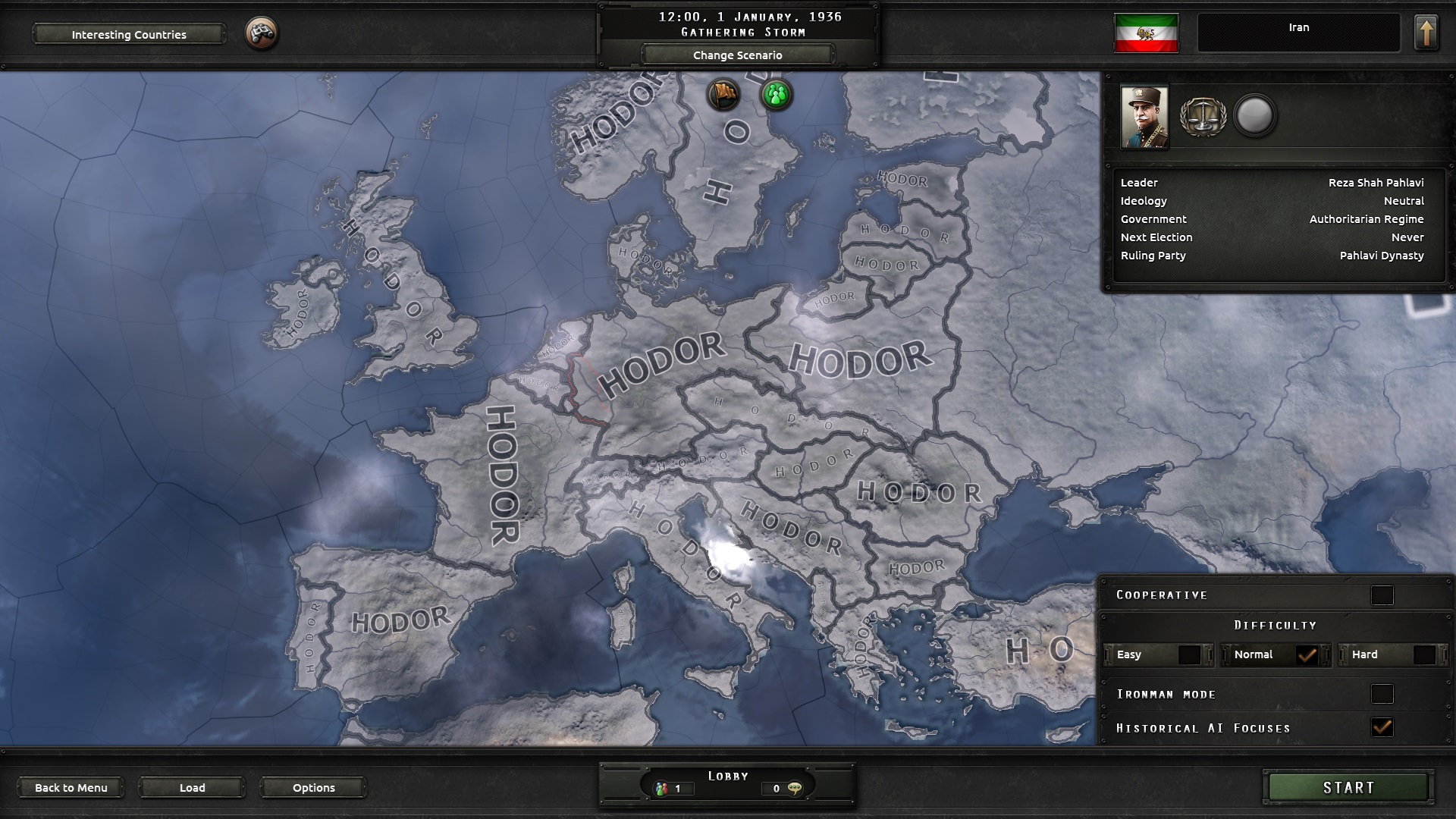 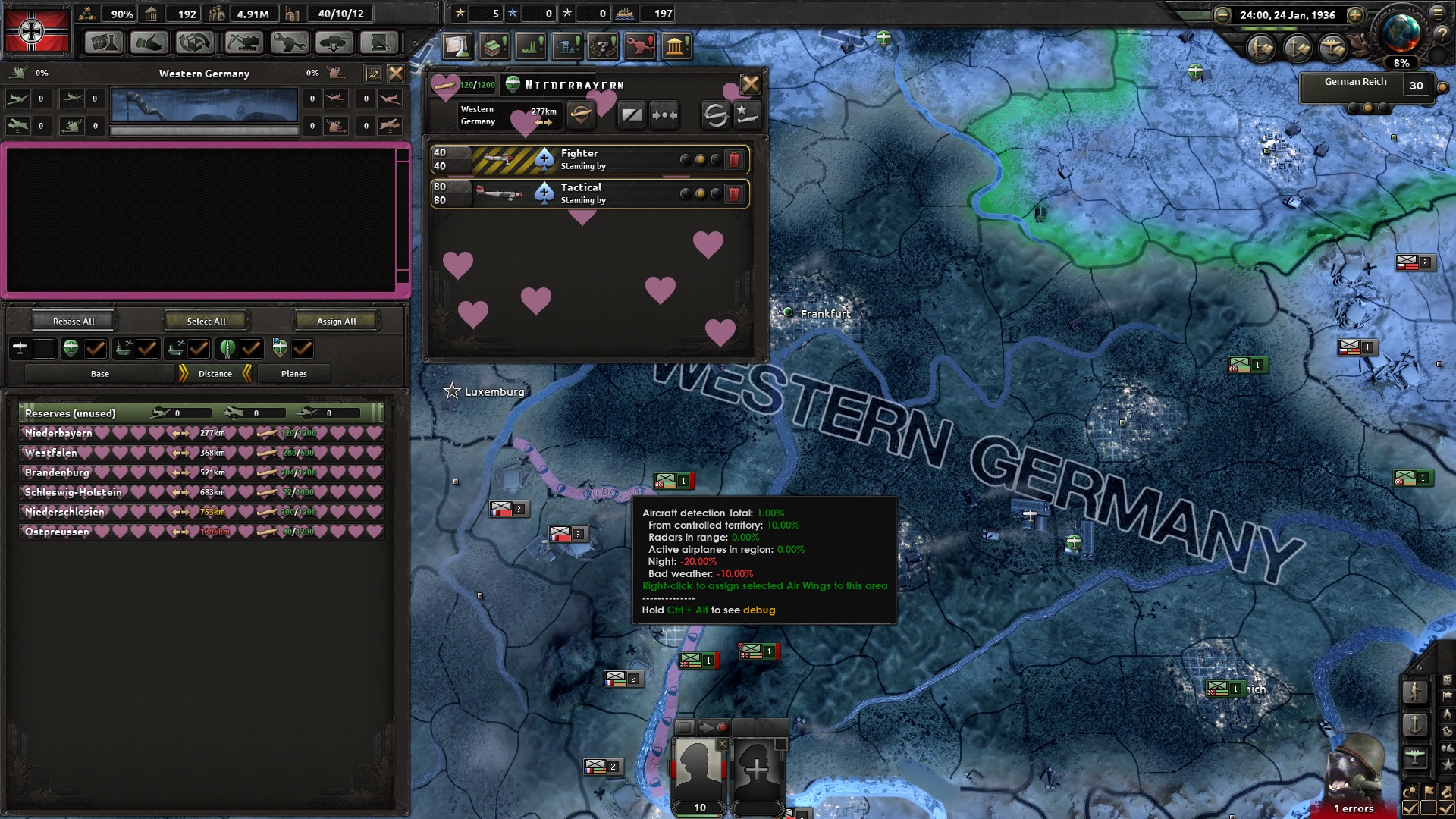 What do we need to unlock to build the floating cube of death?
Reactions:

First image is. I must go, my people need me (stellaris mode)
Reactions:

Was there any emergent gameplay that you did not expect but were surprised by and later developed as a feature of the game?
Reactions:

Any dedicated testing for minor platforms such as linux? To be honest I have only encountered very few linux-specific bug.

QA must be a bad job, considering most of the forum users here would do it for free for a certain amount of time
Reactions:

How could "quality insurance" let pass the fact that major equipments (tanks, planes, ships) are moving forever without fuel ?
Last edited: May 6, 2016
Reactions:

if there is Hodar, I hope you checked for dragons
Reactions:

Like the game of thrones inspired map at the top
Reactions:

That Fascist USA.
Expand signature
My suggestions about 1066 and 867 Iberia (Crusader Kings 3)

My suggestions about Iberian cultures and religions (Imperator: Rome)
Reactions:

rotting soon at a place near you

Sooo, you are the one we can make responsible for any mishap......Assemble the crosses and light the torches +++ iii
Reactions:

Med1980 said:
Any dedicated testing for minor platforms such as linux? To be honest I have only encountered very few linux-specific bug.
Click to expand...

Some QA have more than one platform on their desk. So usually win+linux or win+osx. Dev team has mix of platforms as well so we can test as we go (@TomaszKowalczyk has like 12 screens on his desk)


panzerzombie said:
Sooo, you are the one we can make responsible for any mishap......Assemble the crosses and light the torches +++ iii
Click to expand...

Contrary to popular belief just because someone has found a bug doesn't mean it automatically get fixed ^_^
Expand signature
Reject reason to make the impossible possible!
Reactions:
T

Now that is a refreshing DD, QA is a perspective you rarely hear!

podcat said:
Contrary to popular belief just because someone has found a bug doesn't mean it automatically get fixed ^_^
Click to expand...

btw.: what will be topic of next DD?
Reactions:

Ho ho ho hodor . Cheers for the DD Distantaziq . From those pictures, it sounds like your time in the QA corps while serving on the HoI4 front has been an interesting one . Very much appreciate the work of yourself, Daniel and all the other QA involved, very important and often under-appreciated job - keep up the great work, HoI4 has been looking remarkably 'together' during the WWWs.
Expand signature
The object of naval warfare is the control of communications, and not, as in land warfare, the conquest of territory
- Sir Julian Corbett
Modding minutae thread
Reactions: