Jump to latest Follow Reply
Menu
Install the app
You are using an out of date browser. It may not display this or other websites correctly.
You should upgrade or use an alternative browser.
Hearts of Iron IV 42613 Bug Reports 13383 After Action Reports (AAR)
Show only dev responses

It's time for another Hearts of Iron IV Developer Diary, and this time I'm going to talk a bit more about production; specifically the Production Lines and How Things Get Built. All military equipment is made on Production Lines in HoI IV, so players will need to be familiar with how they work if they want to maximize their war machine.

But before we can talk about the production lines themselves, we should cover how Industry has changed in HoI IV.

First of all, we have separated industry in Hearts of Iron IV into 3 types:

Civilian industry - Used both for "Consumer goods" and building infrastructure and other buildings.
Dockyards – Used for building ships.
Military factories - Used for production of military equipment such as tanks, weapons and airplanes.

This kind of separation allows us to balance different countries' industrial strengths (the capacity to make ships is not the same as the capacity to make luxuries), and gives the player a more interesting selection of targets for strategic bombing.

Moving on to the actual means of Production, Factories no longer need Metal/Energy/Rare Materials to run. Requiring the player to gather several different types of resources in order to manage factories did not necessarily add anything interesting to the mix. Being short on any of them had the same effect no matter what you were lacking (your Industrial Capacity would shrink) and it didn't entirely make sense that you couldn't build things like Militia if you didn't have access to Rare Materials.

We have simplified the inputs to "Raw materials" which factories use to run. Raw materials act as a limit on your total Industrial Capacity. However that is not the whole Production story. Equipment also has a Strategic Resource cost, without which it takes much longer to produce. Strategic Resources are not accumulated in pools. Instead, they represent the potential flow of resources into your factories. For example if you have 10 Iron you can be building stuff that costs up to 10 Iron at any one time. 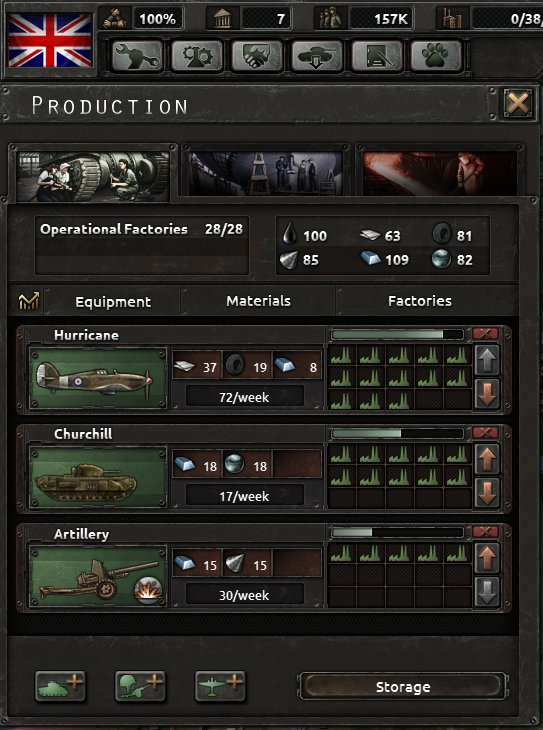 As a totally made up example: An Advanced Medium Tank may cost 2 IC and require 1 Iron and 1 Tungsten. Each Factory produces 10 IC, so if you assigned 1 Factory to this Production Line, you would produce 5 Advanced Medium Tanks per week. If you assign 10 factories you would get 50 tanks/week. At the same time you would need to have 5 Iron and 5 Tungsten in the first case, and 50 Iron and 50 Tungsten in the second. (Again, these numbers are all purely made up, focus on the idea and not the values here.) You can only assign up to 15 Factories to any given Production Line, so you won't be able to build, say, a Battleship in one week by assigning 100 Factories to build it.

Also, do note that simply building Equipment is not the same as training and equipping a unit, but we'll cover that in a future dev diary.

Production Lines also have an Efficiency value which affects how much value you get out of your IC at a factory. Your efficiency starts out fairly low but increases as items are produced - slowly at first to represent the retooling of the factories, then it begins to increase at a linear rate until tapering off after a certain value (an S curve). You can change what a Production line produces, of course, and this normally means all your Efficiency is lost, however there are some exceptions. If you change to a modified version of the same equipment (for example, the same tank but with a larger gun) you keep most of your Efficiency. If you switch to another variant of the same chassis (e.g. you switch from Pz IIIs to StuG IIIs) you keep half your Efficiency. And if you switch within the same family (e.g. Basic Medium Tank to Improved Medium Tank) you keep a small part of your Efficiency.

Efficiency means that you will be able to produce more once your factories are humming along. So long as you can keep your workers on task and supplied with what they need, you will be able to have assembly line production that properly reflects the might of an economy dedicated to the war effort.

Our larger hope is that Production Lines and efficiency will offer players some interesting choices when it comes to deciding what to build. Should you go for a large number of weapons you can already churn out, or take a short term hit on production in favor of making a smaller number of higher quality ones? Sure, your new T-43 tank is better than the T-34, but is it really enough of an improvement to lose much of your Production Line's Efficiency when you switch over? Your PzIII tank may be obsolete, but perhaps instead of canceling their production entirely you could convert the Line to make Tank Destroyers or Self-Propelled Artillery on the PzIII chassis. Preserving efficiency in some of your factories could lead to a more diverse and interesting combination of units, and allow you to discover some parts of the game you might have ignored if you just constantly upgraded.
Last edited by a moderator: Apr 21, 2015
Toggle signature
Reject reason to make the impossible possible!

First !
Toggle signature
In memory of what could have been, I shall mourn until the day a Cold War grand strategy game worthy of the period is released.

The mods like me a lot. They're always sending me PMs !
Reactions:
U

The new resource system is a simple and elegant solution to an old problem. Looking good =D
Reactions:

Can we assign specific factories up to the task - less exposed to enemy airways, for example - or will it be any factory?
Reactions:

I'm really happy that I check the forum every few hours. Thank you podcat!
Toggle signature
My youtube channel for those who are interested
Fighting between the Elbe to the Oder in the epic classic: Battle of BerlinAAR (a largely historical 1945 Video AAR)

One question, can you add or remove factories from production lines already running, and if so, what would that do to the efficiency?
Toggle signature
I alone have the right to use my avatar!

Holy.Death said:
Can we assign specific factories up to the task or it'll be any factory?
Click to expand...


Meanmanturbo said:
One question, can you add or remove factories from production lines already running, and if so, what would that do to the efficiency?
Click to expand...

You can, efficiency is actually stored per factory, so adding more will "dilute" your efficiency a bit, while removing them will increase it somewhat.
Toggle signature
Relentless madman.
Reactions:

Excellent stuff. How many strategic resources are there? Is stockpiling gone entirely?

The idea looks promising, but it seems that does not agree with the general idea of simplifying the game. This system seems more complex and will require more micromanagement than the old system and a wrong click could devaste your hard work on a production efficiency line.
Toggle signature
emux

How can that be more micromanagement when you add any factory to the production line (as shown on screen)? If anything I am more worried about important stuff being produced in range of enemy bombers, but I think this is a trade-off to make people fight enemy off them.

How many strategic resources are there?
Click to expand...

I can see 6. 5 of them are being used in production. I think we see oil, rubber (tire) and iron, but I have no idea what the rest is. Fighter uses aluminium, I guess. Artillery can be using explosives. No idea on the globe though.

You can, efficiency is actually stored per factory, so adding more will "dilute" your efficiency a bit, while removing them will increase it somewhat.
Click to expand...

Ah, elegant. Another question, do you build production lines for consumer goods and factories as well? Do you manufacture "tools" and turn them into factories?
Toggle signature
I alone have the right to use my avatar!

Looking forward to the rest of production about recruiting units and such. I'm really liking the way this is looking so far. Good DD guys.

IRL industry was often concentrated. In HOI3 there was no benefit in concentrating IC in one place - in fact, it was better to build IC in many different provinces in order to make it more difficult for STRATs to target them all in a given amount of time. Will there be an incentive to concentrate IC in a given region/province/whatever in HOI4?

Which IC type is used to build more IC? Can you convert factories to a different type?
Toggle signature
Cybvep's AARs

Looking good, I look forward to the strategical choices that come with it.

This sounds good to me, really looking forward to the game.

Can you convert industry from civilian to military?

Can you stockpile strategic resources?

Does each factory in this production folder correspond with a specific factory on the map or is it abstracted across?
Toggle signature
"An appeaser is one who feeds a crocodile, hoping it will eat him last.".........Winston Churchill
“Do I not destroy my enemies when I make them my friends?” ............ Abraham Lincoln

Love the concept, bit concerned about the production a.i. though. Is the a.i. going to cheat (like in AoD) with the retooling/efficiency? The system of total/partial efficiency loss, serial bonus (s-curve) is fairly easy to grasp for a human player, can't see the a.i. coping with that efficiently though.
Are my worries unwarranted?
Toggle signature
"One of the most damaging lies of our era is the falsehood that people must give up freedom to enjoy economic progress, which makes me think of a story - everything makes me think of a story - about three dogs: an American dog, and a Polish dog and a Russian dog.

What about supply production? It isn't listed with any of the industry types.
Reactions:
B

Darkrenown said:
You can, efficiency is actually stored per factory, so adding more will "dilute" your efficiency a bit, while removing them will increase it somewhat.
Click to expand...

While I understand that adding new factories will reduce the overall efficiency, how does removing a factory increase the efficiency of the production line?
Reactions:

Are upgrades still available for already built models? How will that work, generic or you would also need to assign factories for it?

Holy.Death said:
How can that be more micromanagement when you add any factory to the production line (as shown on screen)? If anything I am more worried about important stuff being produced in range of enemy bombers, but I think this is a trade-off to make people fight enemy off them.
Click to expand...

They are saying you can modify the version of the same equipment with a larger gun, a new chassis, new motor, a new ... X, etc so that with a line of tanks, line of AC, line of art, INT, CAS, ships, etc etc may gives you tons of different posibilties and very differents line of production If you need to switch to another variant of the equipment every...month? week?? well looks more complex than the old sistem.
Toggle signature
emux