Hello everyone! This weeks topic will be the side effects of war: Occupation and Resistance.

Resistance
The main goal of modeling local resistance in HOI4 is to remove whack-a-mole of rebels running around and to model the strategic problems with occupying large chunks of enemy territory. 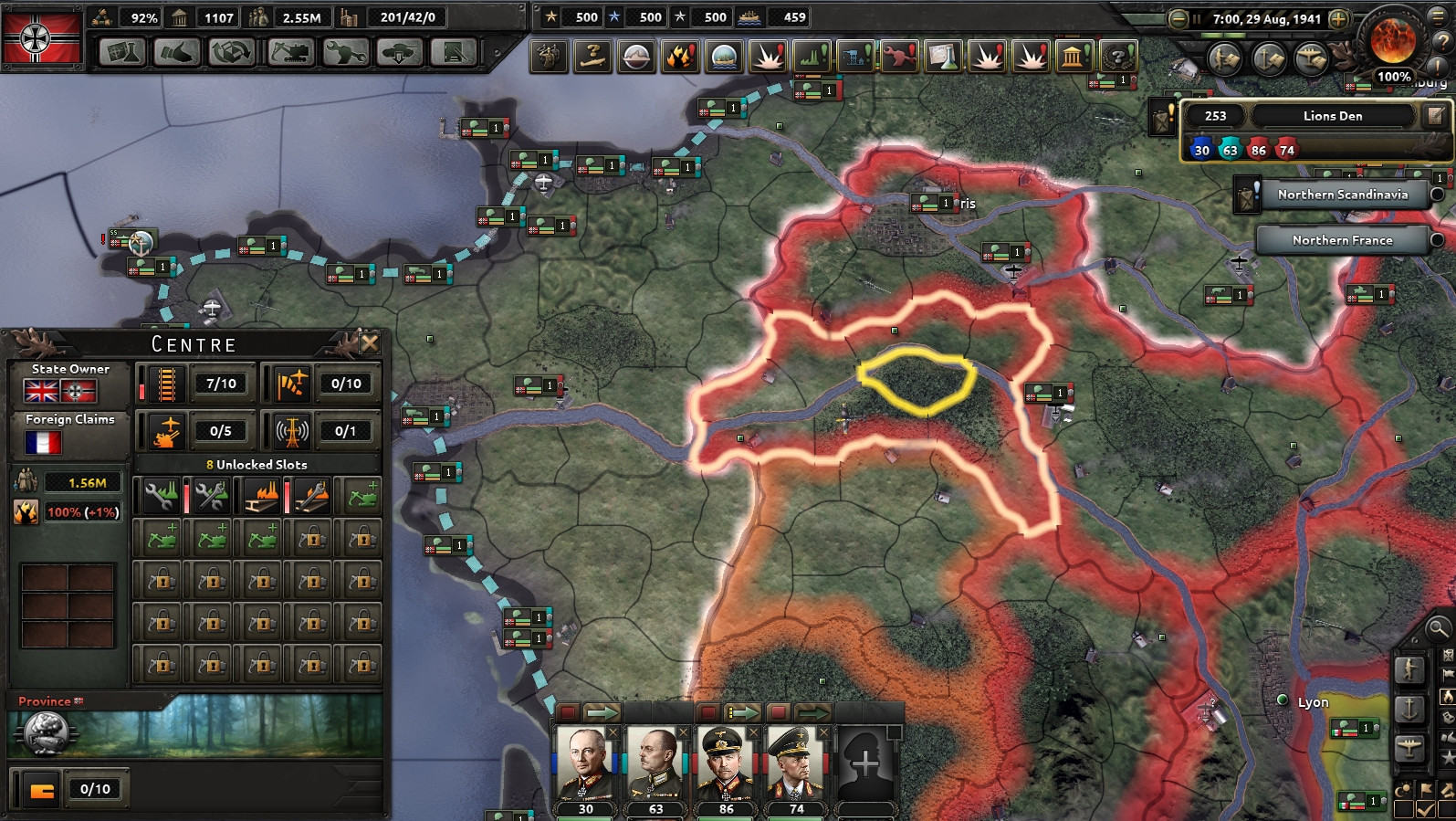 Each occupied state you control has a resistance value indicating the strength of the resistance there. It will slowly grow over time. To reduce or halt growth you need to station troops in the area (preferably special divisions with military police support battalions which are very effective for this) or lower your occupation policy for the nation in question.

As the resistance grows in an area it has several effects:
So it's important to station troops to combat this, but of course that ties up valuable divisions you might want to use to fight the enemy. You can also appoint ministers with the Prince of Terror trait which will help to combat resistance growth in your occupied areas.

Occupation policies
You can set occupation policies for each nation you occupy. They range from Gentlest to Harshest, where harshest has the most aggressive resistance growth but lets you exploit the most 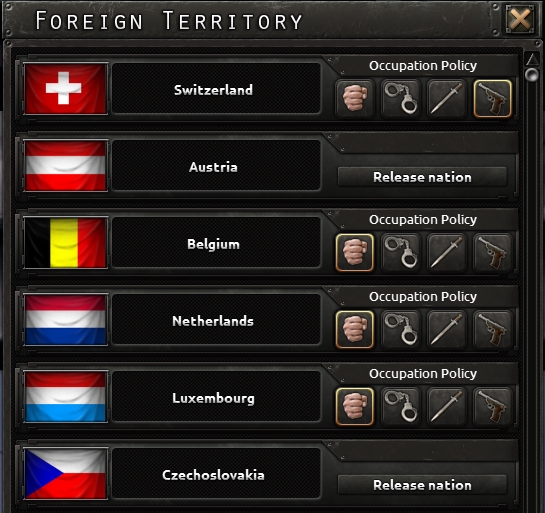 Handing over occupation
Unlike say EU4 or some of our other games, in Hearts of Iron a lot of the map tends to be occupied for most of the game rather than a short period, so it is important to be able to control the occupation during playing. To help with this we have included diplomatic actions where you can select states you occupy on the map and offer the occupation to an ally. This doesn't give them more score for a future peace conference, but it does give them the benefits of the area (industry, resources etc). AI will be quite happy to hand you stuff if you are doing the heavy lifting in the war as well and you can hand over areas you don't have troops to manage, or simply don't care about. 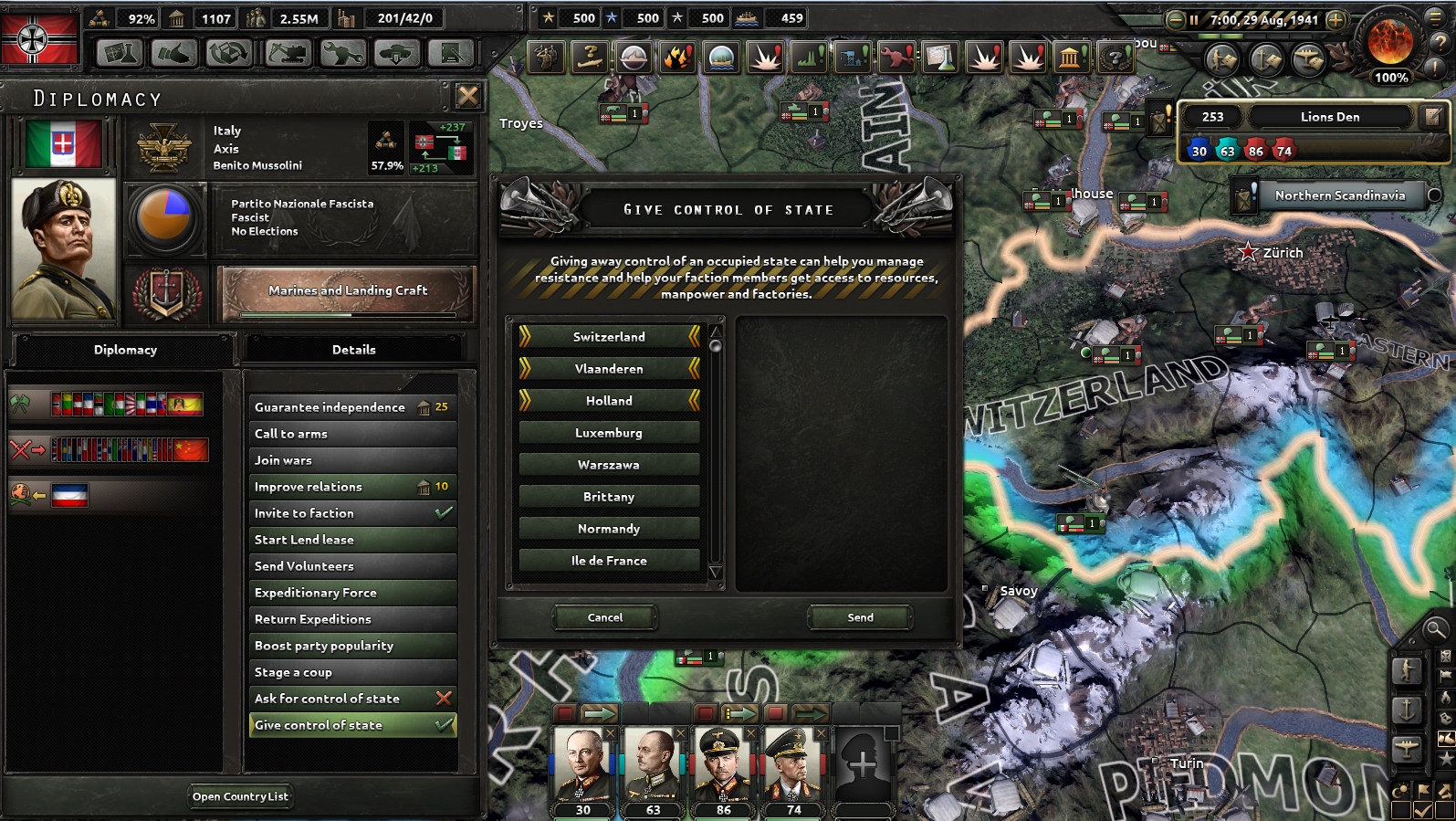 See you all next week again when we will be talking about battle plans!
Last edited: Feb 12, 2016
Expand signature
Reject reason to make the impossible possible!
Reactions:
J

Nice DD. Is it possible that resistant could steal some equipment and help the liberating army with some extra equipment when liberated or give manpower or units? No partisans, but something to help when real army arrives.

also very happy that i dont have to chase partisans anymore
Expand signature
Soon to be a Major religion near YOU!
Reactions:
D

Can the game exactly tell how much we would gain or lose from switching occupation law. Like switching to harsh law will give 5 extra factories and -100 manpower per month?

Are there any point in annexing nations if you lose control over what occupation policy you will use?
Reactions:
B

I like this.
Expand signature
I Still Haven't Found What I'm Looking For
Reactions:
X

Really like the part with enemy intel on occupied provinces with rebels! This gives more an extra litlle incentive to give support to rebels so military knowledge prior to invasion is better
Reactions:

Thank so for another great DD, love the ability to manipulate control of occupied territory!
So, how does resistance work from the point of view of those who are resisting? I didn't see any new information here on this topic.
Last edited: Feb 12, 2016
Reactions:

Seems like a way more realistic way to handle occupation than in HoI3.

Sooo... do resistance dissapear after you take the land in a peace deal or do they want to return to their original country?
Reactions:

Thanks for the DD.

So if I attack say Switzerland as Germany from my ally Italy's borders, Italy will give me back the territory that Italy initially gets when pushing into Switzerland?
Reactions:

That's great news about the global handling and vision of the problematic.

About "offer the occupation to an ally", I'm a bit concerned : Is it realistic to give this occupation for years and then neglect totally the weight of some annexion-or-something wishes from this ally at peace conference ? And what if, say as Germany, I give France occupation to Japan ??! Isn't there a bit too much of freedom here ? What are the historic actual examples that I fail to make pop up in my mind ?
Reactions:

podcat said:
The main goal of modeling local resistance in HOI4 is to remove whack-a-mole of rebels running around
Click to expand...

Thanks a lot. I feared for something on an annoyane scale of eu IV disturbance to vic 2 horror...

Do troops or military police only slow or halt the resistance progression or are there effective ways of reducing it? If not, why should I bother with Provinces at 100%, these would basically be lost now, wouldn't they?
Expand signature
Hey? Wanna buy some fuel? No?...How about now?
Reactions:

Is there any way for Britain to send for example equipment to help the resistance grow more powerful in France?
Expand signature
​
Reactions:

Antpant said:
Thanks for the DD.

So if I attack say Switzerland as Germany from my ally Italy's borders, Italy will give me back the territory that Italy initially gets when pushing into Switzerland?
Click to expand...

Well, exhaustive informations about this particular kind of things would be very appreciated.
Reactions:

So what is the worst case of a region /province in case of resistance?