Jump to latest Follow Reply
Menu
Install the app
You are using an out of date browser. It may not display this or other websites correctly.
You should upgrade or use an alternative browser.
Hearts of Iron IV 40683 Bug Reports 11853 After Action Reports (AAR)
Show only dev responses


Factions
One of the goals for HOI4 was to break free factions from ideologies and let players create their own. Ideology of creator will still matter for the factions special rules and bonuses and who will want to join it (for example being part of a fascist led faction let you declare war on anyone as long as you are already in war).

To create a faction a nation who doesn't start with one needs to take a national focus giving them the ability to do so. Some focuses also sets up factions directly (like France ability to create the Little Entente with the Czechs). Even minors can make factions if they unlock the right focuses. If you make your own you are free to name it and will be its leader. Nations can leave factions in a few situation: Being Couped, leaving on their own (only works if they haven't joined a war together) or some special focus and events. This means that in general, once you have joined a faction you are an ally that can be trusted. 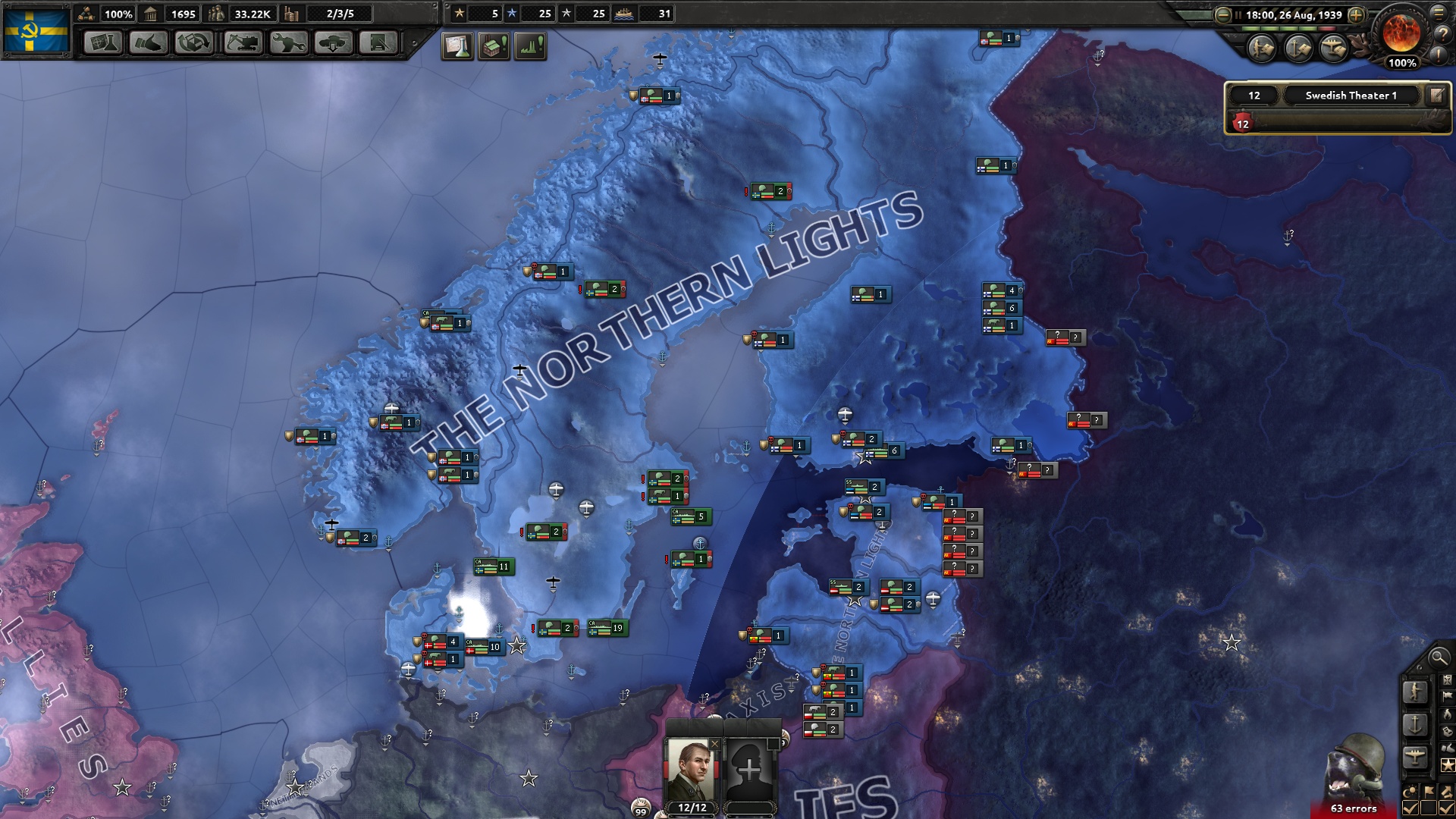 Justify War
To declare war agaisnt someone you need a valid war goal (no matter how falsified). Fascist's special power is that they only need a valid war goal for their first declaration and may continue to declare wars as long as they are at war after that which let them act much more swiftly. Democracies are limited in that they can't justify war goals against someone who has generated no world tension. Having a wargoal is useful once the war is over as it makes demanding those claims during the peace deal cheaper compared to your allies. You can also get war goals from national focuses in special situations, which bypasses all rules.

Offer peace
For HOI4 it's possible to offer to surrender assuming the war has gone on long enough. Terms are set by the winners in this case, but needs to be approved by the surrendering nation. This is different from an unconditional surrender which is what happens when your nation get occupied past the limit set by its national unity. You can read more about peace conferences in this diary.

Guarantee Independence
This is the main tool for democracies trying to stop expansionist powers. By guaranteeing someone's independence you are called into war to protect them no matter what the world tension is (The actual guarantee requires at least 25% tension). Guaranteeing someone cost political power and these get (a lot) more expensive the more guarantees you have so carpeting europe is not a particularly good option.

Military Access
Like in most paradox games, this lets you move troops in a nation's territory, but not attack from there. Airbase and naval base access requires factions and military access is not enough for this.

Improve Relations
Similar to EU4, you can spend political power to smooth talk other nations. This will help getting them in factions or in trade.

Non-aggression pact
A non aggression pact between you and another nation will stop you both from declaring wars. When first enacted you have 12 months where it can not be broken. After that it can be broken if they have a lot fewer units than you on your mutual border. The exact amount of troops required to ensure it's not breakable will get progressively smaller to break over time.

Lend Lease, Volunteers and Expeditionary Forces
There are several ways to help allies, or tip the balance in neutral wars. See this diary for all the details.

Boost party popularity
You can spend political power to affect the popularity of parties in other nations. It's much less powerful than say enacting a minister in your own nation for that purpose, but it means that you can shift nations closer to you or set things up for a future coup 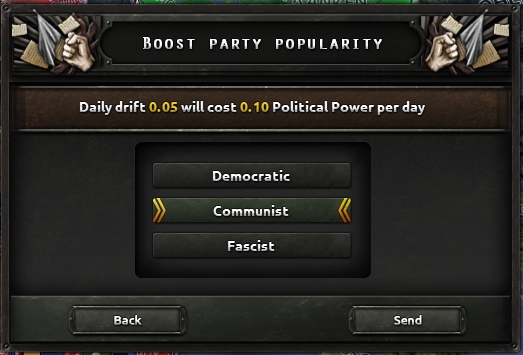 Coup
By spending political power and equipment you can set up a coup in a foreign nation. The size of the resulting civil war depends on several things: Their national Unity, the power of the ideology you are supporting and the amount of equipment delivered. For those worried there are ministers and national focuses available to make yourself safer from foreign tampering like this.

Transfer Occupation
It's possible to give control of occupied territory to others on your side in wars as well. We will talk more about this in the next diary where we talk about occupation and resistance movements.

Then finally I am happy to let you know that our Beta submission was approved yesterday, so we are now officially in Beta. I can't give you any release dates yet, but this is one of the last big steps to nailing one down and saying that the project is on course.

Anyway, we have been working on HOI4 for a long time so you can imagine that this feels really great, and we plan to celebrate with beers and cigars tonight as is appropriate
Toggle signature
Reject reason to make the impossible possible!

Yay finally beta
Toggle signature
CK2 Cultures Reborn, a CK3 mod (OUTDATED)
Do you miss Arberian, Carantanian, Coptic, Crimean Gothic, and Dalmatian from CK2?
You can now find them here, complete with all the characters, name list, and cultural names.
You can also integrate this mod into your mod projects. Instructions can be found in the post.
Reactions:

And great news on finally being in beta
Reactions:

Yay! Beta! Thanks for an excellent DD and looking forward to read about the new take on partisans next week.
Reactions:

Good diary. Very good to hear about the Beta
Toggle signature
“I often regret that I have spoken; never that I have been silent.”

wow first of all that its in beta and second look at the political power that they have
Toggle signature
"This is not a peace. It is an armistice for twenty years "
Ferdinand Foch 1919
Reactions:

"It's happening !"
Toggle signature
"You can live for months without mail; for weeks without food; for days without water; for hours without POL; but you cannot live for seconds without ammo."- Combat Leaders and Lessons.
Reactions:

Ah, The Northern Lights <3
My proudest contribution on this project (thus far!)

beta hype!!!
Toggle signature
If I were a diplomat, I'd call it "misplaced conceit." But I'm not, so I'll call it "frothing, bug-eyed self-delusion." -- Yahtzee Croshaw not being a diplomat
Reactions:

Congratulations on the beta approval! I'm looking forward to more DD's, WWW's and ofcourse a release when its ready!
Reactions:

I also saw that you were communist Sweden good choice
Toggle signature
"This is not a peace. It is an armistice for twenty years "
Ferdinand Foch 1919
Reactions:

Grat's on Beta Woohoo, onto my question, in MP games in HOI3 Guarantee's led to a lot of heartache because they were so easy to do for instance while I wasn't at war with the SU the US player put a guarantee on them quite easily bringing themselves into the war sooner than they could have been otherwise, hopefully their will be a bit more cost or requirements to slap a guarantee on someone besides just WT and some Political points such as how close they are to your faction or ideology say? I'm sure there are better examples but it happened very early in the game and shame on me for not noticing but it was something that annoyed me since and became part of house rules.

Guarantee Independence This is the main tool for democracies trying to stop expansionist powers. By guaranteeing someone's independence you are called into war to protect them no matter what the world tension is (The actual guarantee requires at least 25% tension). Guaranteeing someone cost political power and these get (a lot) more expensive the more guarantees you have so carpeting europe is not a particularly good option.

Is there any polish national focus which pursues the idea of Intermarium?
Last edited: Feb 5, 2016
Reactions:

Then finally I am happy to let you know that our Beta submission was approved yesterday, so we are now officially in Beta. I can't give you any release dates yet, but this is one of the last big steps to nailing one down and saying that the project is on course.
Click to expand...