UPDATE: As of 1.30 this strategy is no longer possible. Rest well, sweet prince.

Though Dharma has been released well over a year ago and has certainly be the basis for many discussion ever since - from Mughal assimilation to the totally not broken TC investments - I think that one particular Indian tag has seen surprisingly little discussion: 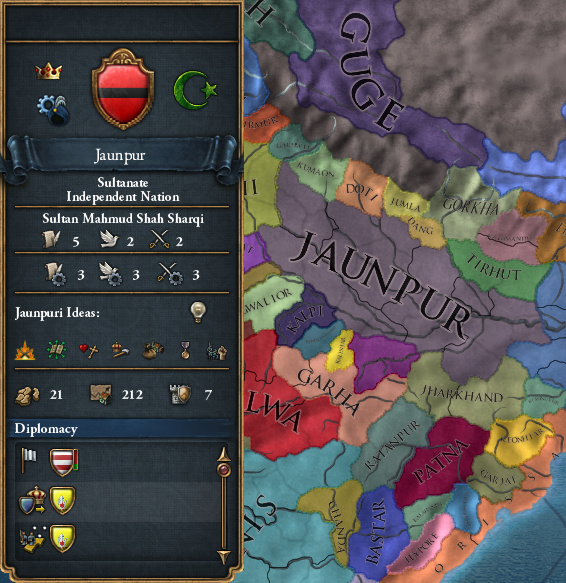 The realm of the Malik-us-sharq, Mahmud Shah
​
Which is strange as Jaunpur is without doubt one of the four major players in 1444 India alongside Vijayanagar, Bahmanis, and Bengal. It has the second highest development on the subcontinent and a decent ruler (but a sub-par heir). Though in contrast to the other three majors it lacks an unique mission tree and thus has to rely on the decent but certainly not stellar generic Indian mission of the northern type.

Though, perhaps if we don't have a mission tree we might acquire one from our neighbors...


1. Introduction and Pre-Unpause Actions
​
To achieve rapid and resource-efficient expansion as Jaunpur, we will mainly make use of the following three game rules:

Anyone who has played in northern India can probably tell where this is going: We are going to annex Delhi, gain its two vassals, and eventually integrate Sirhind on the cheap. There is only one problem: Sirhind will very quickly rebel against Delhi, which ruins the entire strategy. And indeed despite our very fast method to declare war on Delhi, sometimes Bahlul Lodi is even faster. Luckily, when I say "fast war" I mean "December 11th 1444", so even if RNG doesn't work out the game can quickly be set up for another try. Of course if Delhi somehow gets a scary alliance - namely either Bengal, Malwa or Chagatai - it might be a good idea to restart as well. I've not seen any of those alliances during the many Jaunpur runs i did with this strategy, but I have seen them when playing as Sirhind.

With that out of the way, it is time to get started:

Most importantly, do not touch your estates yet, Set your rivals, have your 11 stack march to Sambhal and send diplomats to improve relations with Multan and Kashmir/Malwa. If you can, recruit a Diplomat. Through our war with Delhi we will have to improve relations with those two as well as Nagaur, Mewat and Malwa (if they did not rival us) to not face a coalition. Malwa, Nagaur and Mewat all have a chance to ally Delhi, so I prefer to keep a diplomat in reserve until we have declared war. Also, do not take any RMs and alliances they might offer. Multan and Kashmir are on the chopping block.

In this game Malwa rivaled me, so Multan and Kashmir were the destinations
​
With this out of the way, we will now set up to declare war upon Delhi in December. We will not be able to fabricate claims quickly enough, luckily Jaunpur's mission tree begins with the "Center of Culture" mission:

Would you look at that. That 75% of Delhi's territory!​
To fulfil this mission, we need to embrace two cultures. That will cost 200 diplomatic power, while Jaunpur starts with only 70. So now we will need to somehow acquire at least 130 dip. Estates can give up to 150 (or 200 at 100% influence) power in their type, so we must now make the Jains both happy and influential.

Step 1: Give them all the territory that you can 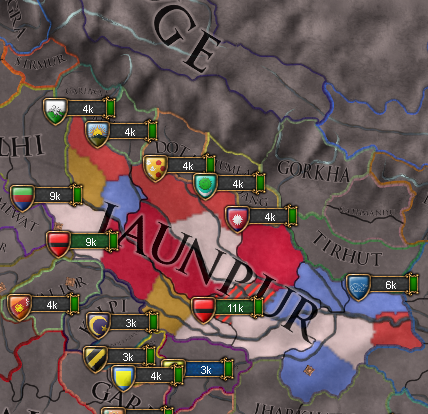 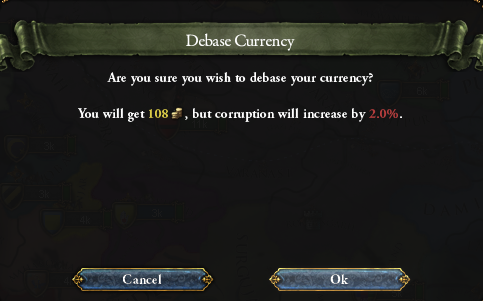 We need 2 corruption for an estate interaction. Neat how all this lines up so perfectly, almost as if it was designed this way ...​
Step 3: Go through all the Jain interactions that give them more influence (Patronize Jain Families, Procure a Loan, Build Jain Temple, Investigate Corruption) 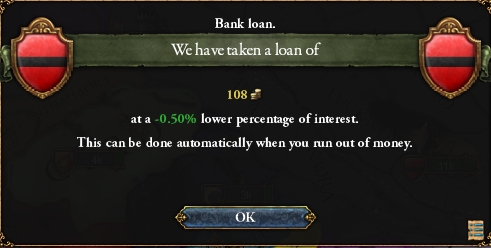 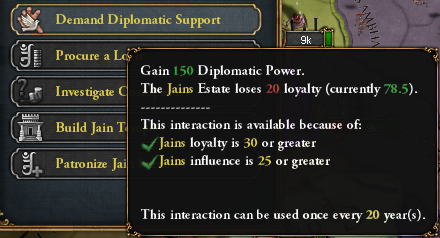 70 + 150 = 220 > 200​
Now use your money to build merc infantry to the force limit. One in Central Doab for a neat 10 stack, the rest will become a 5 stack. While doing all that you should also do your other estate actions: Get a general and military power, fix your religious unity.

Finally, set your subject to remain passive during war.

As Nagaur was the one that allied Delhi, the third diplomat will be sent to Mewat. Also, the claim that SIrhind will aid Delhi is a lie​
Your two main stacks should be arrayed in such a way that they can both march into Delhi(province), which will give the Delhian stack a quick end:

The stackwipe should be secured unless general pips are heavily aligned against you​
Now your stacks will move to carpet siege Delhi. The 11k march to Bhattiana to secure the southern front, while the 5-stack will be split and occupy Panipat and Upper Doab. The 10k stack will siege down Delhi.

Once this is done the next steps depend heavily on who Delhi allied. As this game was against tiny Nagaur I pushed into Jangladesh and the Nagaur to peace them out. Against Mewat I would wait with sieging down Delhi (keep behind a regiment to prevent Delhi from recruiting troops), while against Sindh I opt for a purely defensive doctrine. I gotta wait until Delhi will accept annexation anyway and my diplomats have done their jobs, no way the manpower needed to march across the desert into Sindh is worth that. But most importantly:

DO NEVER, UNDER ANY CIRCUMSTANCES, STEP INTO SIRHIND!

Bahlul Lodi is a god in human form and will beat your stacks senseless, especially as your starting ruler is guaranteed to be Craven while Lodi is Strict.

After any potential enemy ally is peaced out the war becomes a waiting game until Delhi finally gives in. Don't forget to loot all their provinces.

Finally, let me talk about a small bit of RNG that might come up during your war: 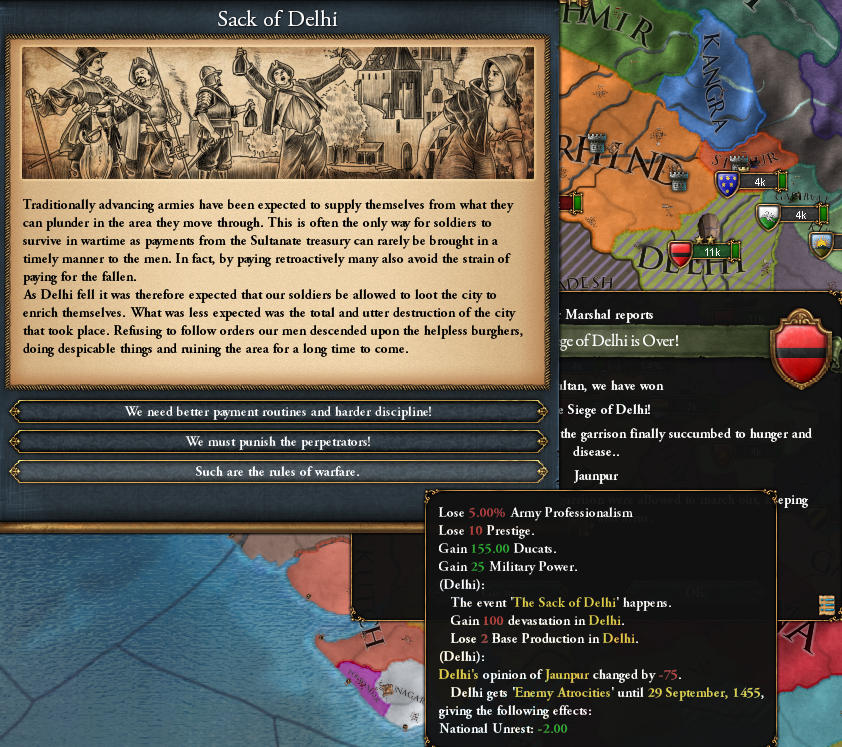 Guys, that is our future capital ​
In my opinion, it is best to sack Delhi for multiple reasons:

Eventually (mid-late 1448), Delhi will give up, and our diplomats have done their jobs of keeping AE in check:

A dead nation and a (spoilers) soon to be crippled nation​
With this concludes the acquisition of Delhi. Now starts the keeping of Delhi.


3. Forming and Securing Delhi​
First, let us take stock of the situation: 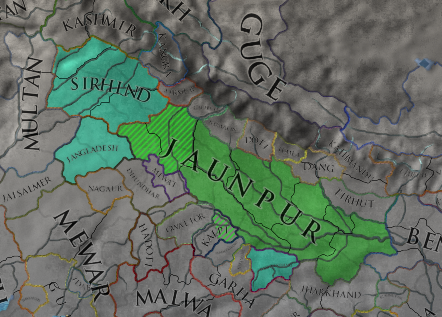 You think this looks good? Well, it will get even better​
Within 4 years and for a cost of 78 base AE have gained:

That's, to put it mildly, an amazing deal already. But we can make it even better. Usually after conquering a bunch of provinces you would need to core all of them, but in our case we have to core only Delhi: 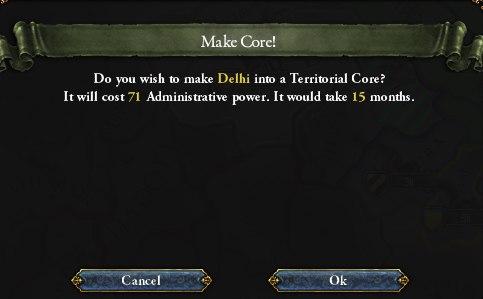 To be completed by November 1449​
While this is happening, send your diplomats to Sirhind and Jangladesh to make them loyal.

Once our core on Delhi is complete we will be able to form Delhi, though it is usually advisable to wait so until January 1st, 1450. The reason for that is the "Rise of Bahlul Lodi" event, which will have SIrhind break free and declare war upon Delhi. For this event to fire however, three important requirements have to be fulfilled:

There is actually a decent chance that Bahlul Lodi will die quickly and heirless, thus making the event unable to fire. If the Lodis hold on however, wait until 1450 to from Delhi. But first complete the second and last mission of the generic northern Indian mission tree: 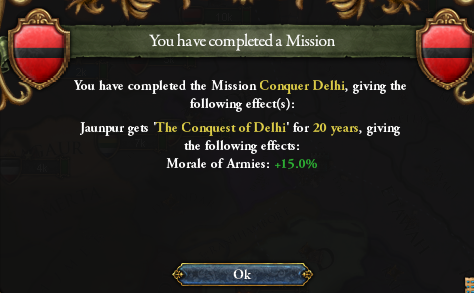 'You know what Jaunpur into Delhi needs? Mini-Elan for 20 years!' - Dharma Design Meeting, Spring 2018​
Now we can press the Delhi button and make our already great deal so much better: 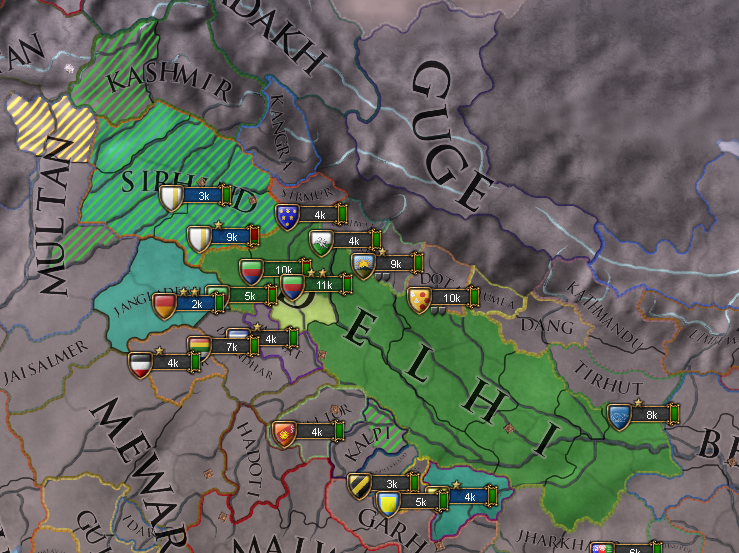 Don't fight me, I know core-fu!​
Now Delhi can pretty much do whatever it wants. But Kashmir holds one of our cores and is a pitiful little country. So I beat them up: 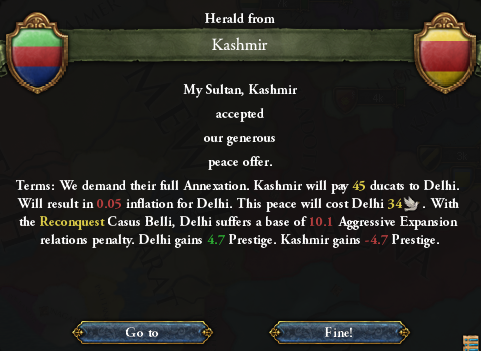 As they are religiously isolated, nobody cared​
After the Kashmir war I developed once in Sirhind to turn them loyal, and then used their troops to beat up Malwa, who had the mighty empire of Baglana (an OPM between Bahmanis and Gujarat) as their only ally: 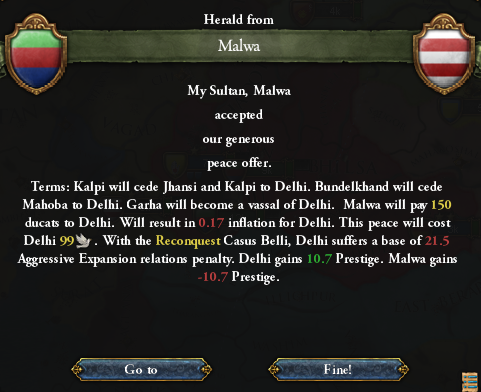 If they want to live, they should not hold my cores​
Because I was a dum-dum and forgot to RM Sirhind, they flipped disloyal again after the war, so I had to put another dev into them to do this: 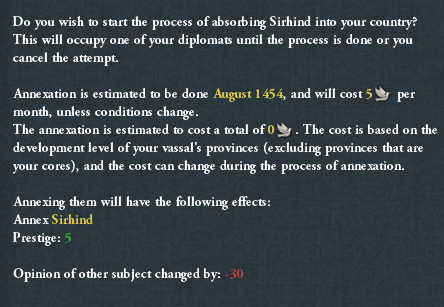 0/5 = 0
​
A month later Sirhind pops out of existence, and we have reached the end of this guide. Finally, let us take stock of our empire, 9 years and 9 months after the game started: 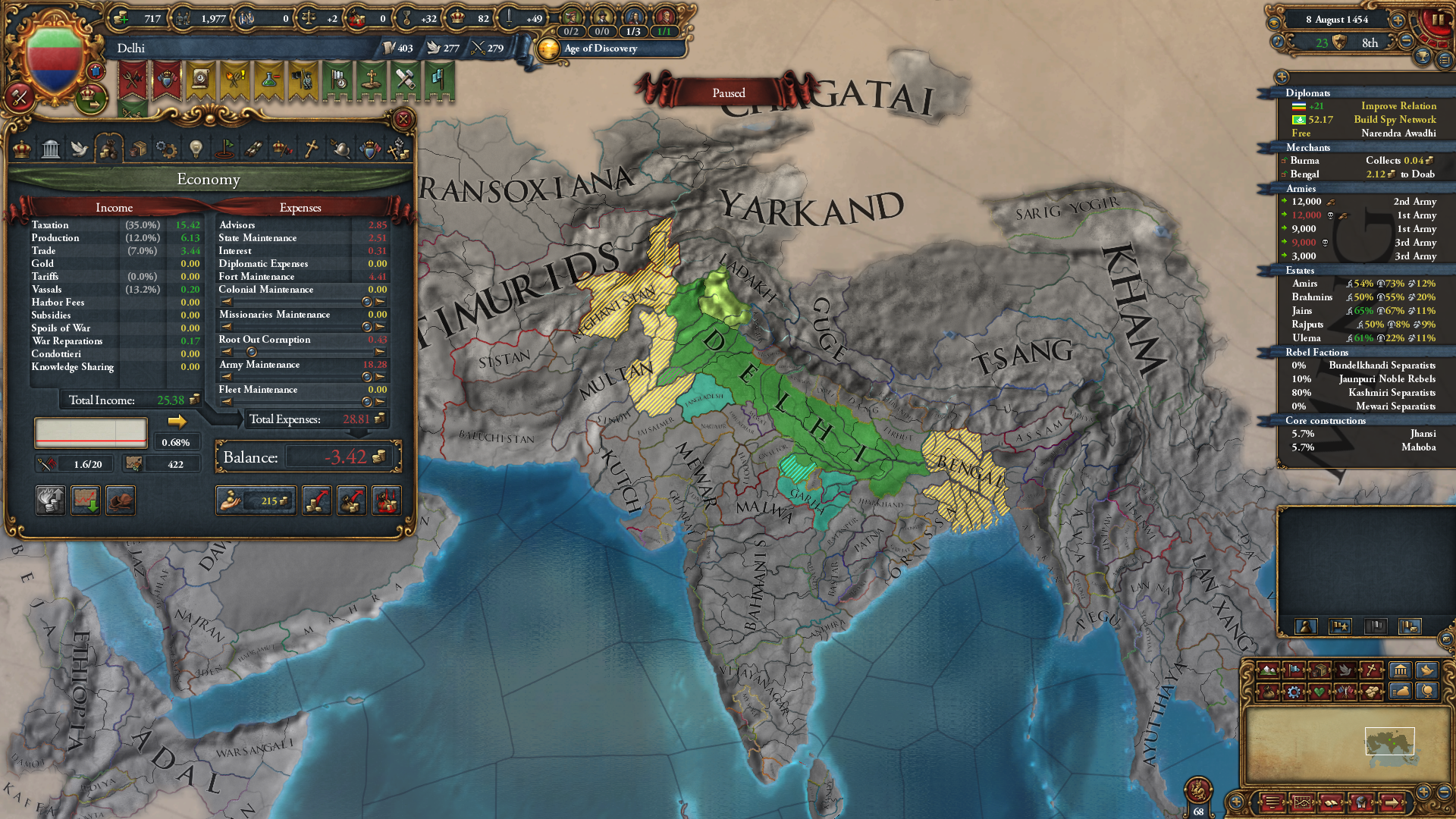 Still so many countries around that want to die ...​
Our development has risen from 212 to 422. 7 dev comes from development (2 in Sirhind to make them loyal, 5 in Upper Doab to start pushing Renaissance). If Delhi hadn't been sacked, we would have exactly doubled our development.

Our number of vassals has risen from 1 to 3.

If we ignore development this whole deal cost us 171 administrative power and 353 diplomatic power.

And perhaps most importantly, we now have the amazing Delhian mission tree to work through.


4. Final Thoughts​
In my opinion, this very cost-effective and explosive start makes Jaunpur the by far strongest country in India. Vijayanagar might have higher initial dev, but has problematic events to contend with and cannot match this rate of expansion. Bahmanis might have Golconda and quite a few cores to regain, but it is still not nearly as explose. Bengal is sadly the least of the 4 Indian majors.

I would be grateful for any comments and constructive criticism, for I did not intend this thread to only be a way to offer this strategy to interested people, but also as a form of "peer review" before I put an amended version of this guide on the wiki.
Last edited: Jun 23, 2020
Expand signature
EU4 Achievements : 152/310

Most Recent: Mary of Lotharingia
Most Proud of: This is Persia!
Reactions:

Sounds like a good guide! Sadly I don’t own the Dharma DLC