@Gnivom and devs - question and comments regarding AI counterespionage/espionage behavior

Menu
Install the app
You are using an out of date browser. It may not display this or other websites correctly.
You should upgrade or use an alternative browser.
Europa Universalis IV 75449 EUIV: Suggestions 16011 EUIV: Technical Support 5683 EUIV: FAQ & Strategy Guides 182 EUIV: AAR's, Let's Plays, and Fan Fiction EU IV: Alternate History Short Story Contest Contr 26
Show only dev responses
B

Several experiences in recent campaigns have led me to hypothesize that the AI is 'psychic' regarding your claim fabrication - that is, that it greatly prioritizes counter-espionaging you while you are building a spy network in it, even before any public reveal that you are building spy network (e.g. claim fabrication made, or other espionage action).

1) Very often AIs will begin to counter-espionage during fabrication

If counter-espionage debuff was present at the beginning of the spy network buildup, I would understand. Fine - that is a calculated risk. Both human and AI have limited diplomats (I think?), if we're counter-espionaging people that aren't even building spy networks on us, that's essentially a wasted diplomat that could have been building relations for alliances, or annexing vassals, or doing other productive things. But the equation changes if we knew that people were fabricating, since that may affect our diplomat allocation priorities.

But right now, that's very often not the case - you can get through 3 months or so of claim fabrication before the counter-espionage debuff begins, which leads to high suspicion that even before you fabricate a claim the AI 'knows' you are building spy network and is acting on it.

I could understand outraged, threatened, or rival AIs randomly counter-espionaging. But neutral? That is interesting, and hardly seems like a good allocation of diplomat-time in most cases (mind you, its making a reasonable play since I intend to instantly fabricate after annexing Assam, but still, I would expect it to change to threatened in response if it was a threat calculation that determined counterespi, not "is the player building a spy network on me"): Second I'd like to ask why AIs seem to prioritize taking the espionage idea group so much. This idea group is, for the large part, absolute trash, useless, even more useless for AIs, so I am curious when nearly 40% of tags sampled take this group in first 4 (maybe a biased sample). Its not just OPMs, GPs do this too (espi Prussia? really?) and I'm curious why this is if indeed the idea group weightings were based on player idea group elimination threads.

However, combined with psychic counterespionage (if that's a thing) it does now severely slow down spy network fabrication, though of course there's always the trusty spymaster to beat down cheeky espionage using scum. But such a thing merely delays their demise (at least in my case, 10 patch versions have given me a slightly irrational desire to exterminate every espionage taking tag), its basically 'lose slower' while something like diplomatic may actually turn their situation around.

(Side note: I propose on VH difficulty, AI only takes following idea groups:

* Defensive
* Offensive
* Quality
* Quantity
* Plutocratic is okay too, I guess

Of course, that's kind of difficult to actually prove, so here's general observations consistent with said hypothesis.
...
Ultimately, whatever, its a small thing. Its not going to slow me down that much, and its hardly gamebreaking. But it would be nice to have dev confirmation that yes, the AI does know exactly when we are building spy networks and will prioritize counter-espionage. Might be a stealth buff to the rather subpar religious these days as deus vult cares not about your lack of claims.
Click to expand...

No, not difficult at all.
Unless I grossly misunderstood something, it is not even hidden... 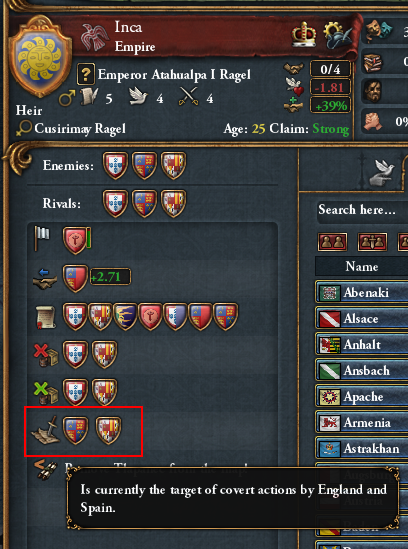 Don't know about that espionage stuff but about idea groups - its time to finally buff useless and weak idea groups - rather then to railroad AI (very hard on not) to pick only good groups. They are fixing Aristocratic, they should fix other groups as well. There were plenty of good suggestions in Suggestion forum. AI picking the same groups as player "fix" was just a sad case of avoiding serious balance issues..
Toggle signature
Guides
Ages - Splendor abilities guide
State edicts guide
Suggestions
State edicts - qol and balance
B

Bumping this. Had a country that was not counter-espionaging me immediately counter-espi before the spy network even ticked once...I'd like some confirmation that I am not crazy. @Gnivom


SolSys said:
No, not difficult at all.
Unless I grossly misunderstood something, it is not even hidden...
View attachment 268762
Click to expand...

Those are the actions such as sabotage reputation / sow discontent actions which reveal the presence of spy network, not the buildup, as far I know. However, until your spy network buildup is caught or you make a claim, or you make an espionage action, its not known whether spy network is being built. So basically the AI is acting off of information that is not available to player.
Toggle signature
1.8 'Fast revoke' Austria WC AAR - 1 2 3 4 - completed 1654 - and again in 1.17, this time in 1584
1.12 Republican Milan WC - 1762
1.14 Kazan One-tag WC - completed 1701, reprised in 1.17 Christian Kazan WC AAR (complete) - 1707
1.14 The Three Mountains
1.15 Rigan Mughals One Faith, One Tag
1.18 Kilwa -> Italy 85% reduced coring cost One-tag WC - 1759
1.19 Aztec True One-tag WC AAR (complete)
1.20 Theravada SpanishBritalianFrancoPrussian Holy Roman Emperor of China One-tag - 1724

Another concern with this behavior is part of it is straight up AI throwing.

If the AI is counterespionaging within days of you building up a spy network, then it presumably has an idle diplomat. It could be gathering useful alliances with that diplomat, but it is not. Instead it dedicates the diplomat to delaying their time of destruction by 20 months (and smart play right now against someone you can't destroy in single war is not take the claimed province so you can kill them after the truce timer without needing to fabricate the next claim), presumably to spite the player.

This idea group is, for the large part, absolute trash, useless
Click to expand...

Is it? I take it every game. You don't like extra siege ability?
Toggle signature
“Your intentions were the noblest—you only sought to construct a kingdom as lifelike as possible, so similar to a real kingdom, that no one, absolutely no one, could ever tell the difference, and in this, I am afraid, you were successful! Only hours have passed since your return, but for them, the ones imprisoned in that box, whole centuries have gone by —how many beings, how many lives wasted, and all to gratify and feed the vanity of King Excelsius!”

delra said:
Is it? I take it every game. You don't like extra siege ability?
Click to expand...

You get the extra siege ability regardless you have the idea group or not. The condition is that you build up spy network.

Both picutres appear to be the same, or am I too stupid to notice a difference?
T

I see this too. I thought it strange that random small nations had set me as counter espionage so I slapped a spy on and watched what happened. You get utter nonsense like neutral Madagascar Fetish insta-reacting to a colonial Asian trying to set its first claim off a nearby island.


bbqftw said:
If the AI is counterespionaging within days of you building up a spy network, then it presumably has an idle diplomat. It could be gathering useful alliances with that diplomat, but it is not. Instead it dedicates the diplomat to delaying their time of destruction by 20 months (and smart play right now against someone you can't destroy in single war is not take the claimed province so you can kill them after the truce timer without needing to fabricate the next claim), presumably to spite the player.
Click to expand...

Maybe this is paradox's idea of a good use for that "free player only diplomat" the AI gets?
Toggle signature
ROTW Bros: Unreformed all game | Video: Great Khan Achievement with Mongolia.

TheMeInTeam said:
Maybe this is paradox's idea of a good use for that "free player only diplomat" the AI gets?
Click to expand...

Didn't they "improve" the AI in 1.20 so that extra diplomat was removed?

It feels like the AI is bullying the player. I felt like getting stuck in a lot of multiplayer games as well because everyone nation i tried to fabricate on would just counter it. Making a single claim takes forever.
Toggle signature
"How can you govern a country which has two hundred and forty-six varieties of cheese"

FleetingRain said:
Didn't they "improve" the AI in 1.20 so that extra diplomat was removed?
Click to expand...

delra said:
Is it? I take it every game. You don't like extra siege ability?
Click to expand...

There's a long holiday right now but I've poked @Gnivom about this thread for when we're back in office.


Zwireq said:
They removed extra relation slot reserved for the player, not the extra diplomat. And it was done in 1.21, extra diplomat IIRC is still in. (Could be wrong though, haven't checked it lately.)
Click to expand...

There hasn't been a reserved relations slot since sometime in 2014. What you're seeing in recent patches is not related to that.
Toggle signature
No fighting in here! This is the war room!

Trin Tragula said:
There's a long holiday right now but I've poked @Gnivom about this thread for when we're back in office.

There hasn't been a reserved relations slot since sometime in 2014. What you're seeing in recent patches is not related to that.
Click to expand...

One should not post straight after waking up. I don't even know why I wrote that Because change in 1.21 is tied to the 'over the limit' of the relations etc.
Toggle signature
My guide(s):
Unit guide - forum thread (with PDF version)
My infograph(s):
Average casualties done by units
My calculation(s):
Discipline vs Infantry Combat Ability
My mods:
EU IV - No Random Combat - link to forum thread // link to steam workshop
HO IV - Combat tactics fixed - link to steam workshop
Proud owner of Pre-Nerf Sun-Tzu Reborn Achievement - link

Strictly circumstantial evidence but I can build spy network without triggering CE by AI until I claim the 1st province. After that point sometimes they start CE immediately and other times it can be 2 or 3 claims. I wonder if threatened attitude, AE, negative relations factor into the AI's CE focus. I know you are a much more aggressive player than I am which means you could be reaching that threshold much quicker. Because I do notice AI being much more vigilant once I've triggered that outraged attitude. Also there may be cases where the less tags around means less use of diplomats in general, so they could have a "spare" always around, ready and able to thwart your fiendish plots.

Well spotted. I was not aware, but the AI only considers counterespionage when they are being spied upon. This seems like a minor bug, but since my philosophy is that the AI should cheat as little as possible, I will fix when I get time.
B

Why propose humanist ideas for the AI on very hard?
You dont see many AIs ever having issues with rebels on very hard -> humanist is useless.

Whats left without all that unrest stuff?
- 2 max promoted cultures -> useless for all small AIs and large ones are empires so high chance that it is useless too.
- 30 improves relations -> relatively useless too, because AE for AIs on very hard is very low.
- -10 idea cost/harmony -> AIs get ideas cheaper anyways, i seldom see them short of monach points -> useless.