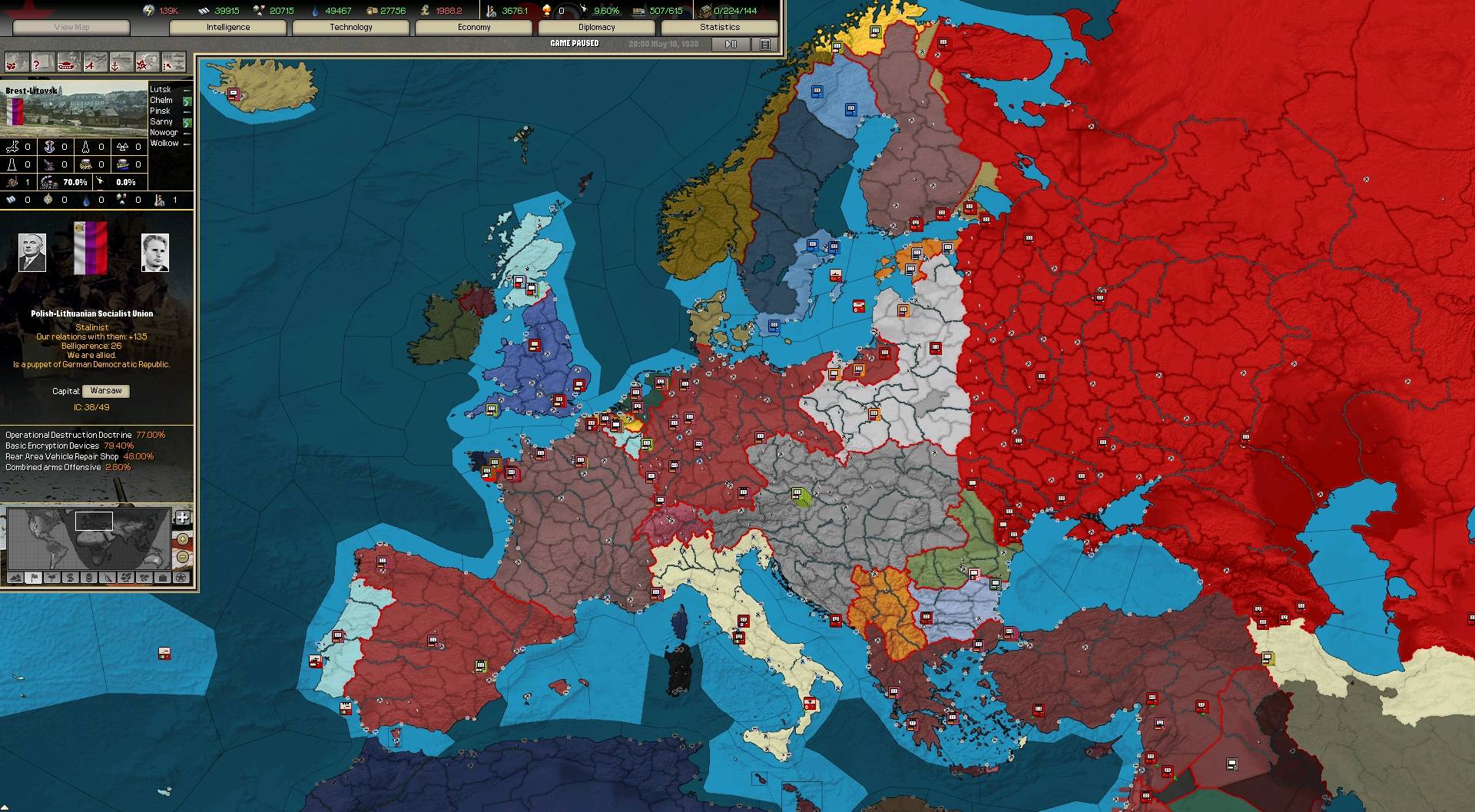 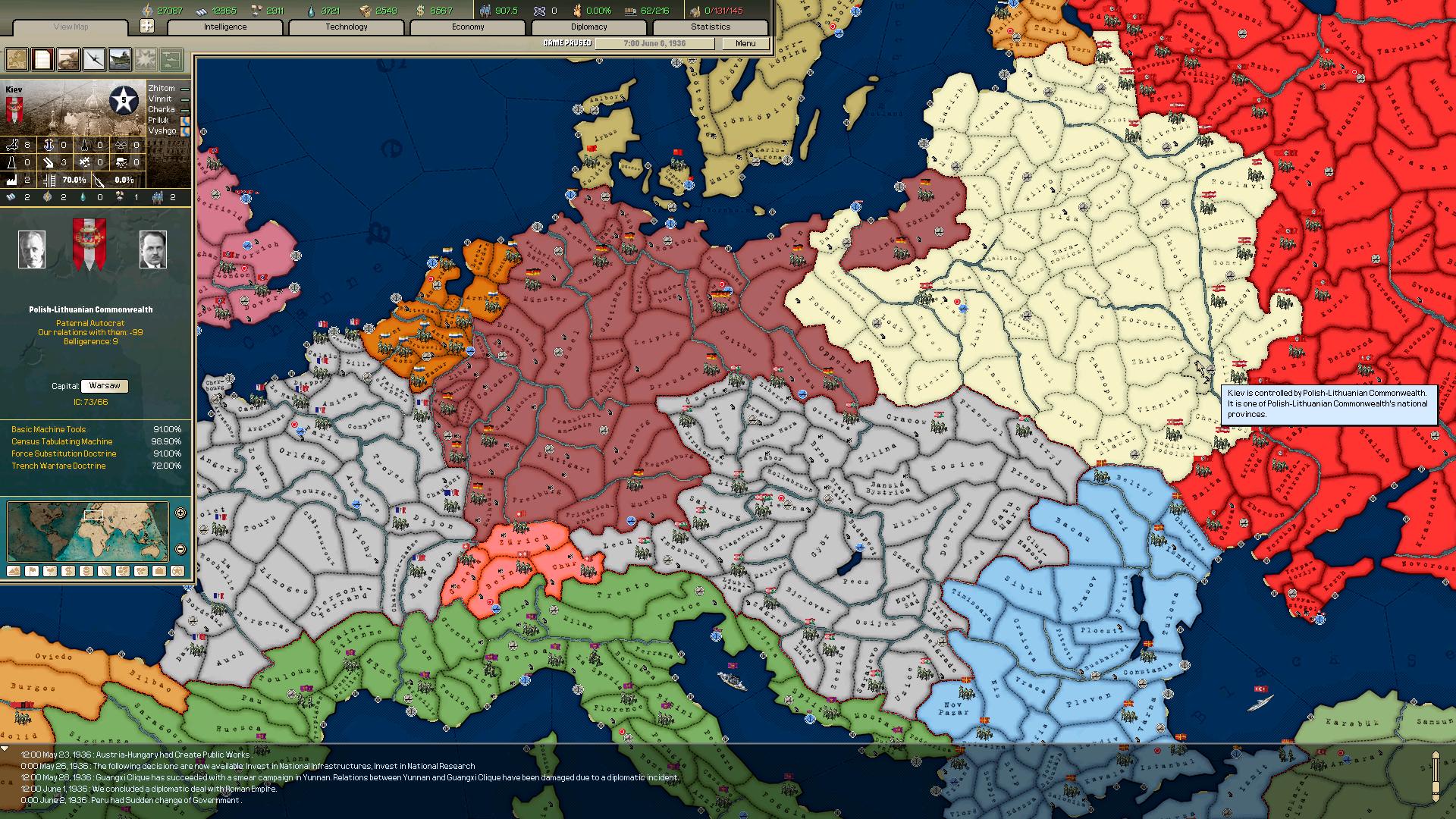 This mod adds lots of details and improvements to the base game. It has dynamic country flags and names that change based on ideology, adds several formable nations, allows natural reunifications to occur between opposing governments of the same nation (east and west Germany, for example) and has an experimental political turmoil event chain which theoretically gives every country in the world the ability to join any alliance.

Flags - I've added hundreds of new flags to the game. These are based on real historical flags representing the specific ideologies of their respective countries. Not every ideology is different enough to warrant a totally separate flag (social liberal and market liberal, for instance, could both reasonably be considered centrist). Most countries have about 3-4 different flags, and some have as many as many as 8. Some smaller nations, however, do not have any alternative flags (such as Namibia or Nicaragua). The new formable nations have their own sets of flags as well. Some flags are actually specific to who has puppeted a country. For instance, a German puppeted Norway will be called "Reichskommissariat Norwegen" (this is different from an independent fascist/nazi norway) while a Soviet puppeted Norway will be "People's Republic of Norway" with differing flags, of course. All of the new flags also have accompanying counters and icons.

Reunifications - Nations that can be split ideologically (such as Nationalist Spain and the Spanish Republic) can now reunify assuming that one country's government changes to match the other. The country which will take the dominant role in the annexation process is always the one whose ideology is already naturally aligned (Nationalist Spain being Autocrat/Fascist, for instance). For example, if the Soviet Union performs a successful coup on west Germany while east Germany exists, east Germany will automatically annex west Germany. If east Germany does not exist, west Germany will simply become east Germany as usual. Additionally, if a player were to manually change their ideology in the diplomatic menu, they are now given the option to form the new opposition government through the flagchange event. Also, a player that is on the receiving of an annexation will always be notified by an event beforehand, so there is no worry about a game abruptly ending with no explanation due to being coup'd.

Political Turmoil Event Chain: I have added an experimental set of decisions that allow players as well as the AI to more radically influence the direction that their nation takes in WW2. These events may seem redundant, but they do in fact allow for interesting scenarios that are otherwise impossible in the base game. For example, the UK can leave the Allies, join the Axis or Comintern, or simply remain neutral despite being the leader of their respective alliance. This is not just a random free-for-all either. Nations which are already members of a major alliance have a lower likelihood of leaving and joining another compared to neutral countries. Additionally, nations are more likely to join the alliance which currently reflects their respective ideology (centrists lean towards Allies, Right-wingers towards Axis, and Left-wingers towards Comintern). The decision is deliberately structured so that AI countries do not collectively take decisions all at once, and some countries may never take the decision at all over the course of the game. Due to the highly randomized nature of these events (which is a major turn-off for some players) they are disabled by default. To enable them, simply go to to db\events.txt in the mod folder and find the second to last line "#event = "db\events\mod\politicalturmoil.txt" and erase the "#" symbol.

My long-term goal for this mod is to refine the new content, finish applying it to every reasonable nation, add unique artistic elements (title screen, etc.), and add a new scenario. I intend to add a few more formable nations in the future. This is the earliest version of the mod I have released, and I intend to continue working on it until my previous goals are met. I look forward to your feedback.
Last edited: Sep 13, 2019
Toggle signature
CSMF Mod for Darkest Hour
Kaiserreich: Darkest Hour Shields Pack

It is impressive. One more thing could be added if you feel like it. If a dissent rate is too high, or if a larger government meddles in your affairs, than there could be a civil war. You already have chopped up nations for it. So in the '30s Weimar Republic is not DFR and German Union (or something like that) is not DDR, but everything else could be the same.

Khor said:
It is impressive. One more thing could be added if you feel like it. If a dissent rate is too high, or if a larger government meddles in your affairs, than there could be a civil war. You already have chopped up nations for it. So in the '30s Weimar Republic is not DFR and German Union (or something like that) is not DDR, but everything else could be the same.
Click to expand...

This is a good idea and I think I will try to implement it. The question is: how high should dissent be to trigger such an event and what options should the player be given to counter it (if any)? My first thought is that at 25% dissent a country has a high chance of losing control over puppet states and they can either choose to allow them to break away or go to war with them (causing further dissent). At 50% maybe there's a high chance for internal nations (Ukraine in the Soviet Union for instance) of breaking away and the player has the option of either allying them or going to war. At 75% the country automatically loses control of all puppets, all internal nations are released, and the country is put at war with any "shadow governments" (Russia for the Soviet Union) that they may have, or maybe the player has a choice to become that opposing government if they desperately wish to avoid war. I'll play around with this tomorrow and see if I can get it working. Thanks for the recommendation.
Toggle signature
CSMF Mod for Darkest Hour
Kaiserreich: Darkest Hour Shields Pack

To save tags it would also be doable, to just choose a successor nation after 75% dissent and let a lot of revolts happen, which the nation should deal with. So in case of SU, there can be either SU or Russia and with various governments for both. The player has a choice if that is happening, and it would be random for the AI. So for instance a communist SU falls and a new Russian Monarchist state could lead a war against a lot of revolters and partisans or SU becomes a democratic SU and fights the rebels. With actual tags and actual civil war would be better, but there won't be any possibility for that.
AI could also randomize of letting nations go or declaring war. So SU could let the Baltic states go, but declare war on Ukraine.
Breakaway nations would give dissent, but annexing defeated puppets would actually lower them. Why? It shows, that the government is still in power and they have the means to overcome chaos.
Last edited: Jan 1, 2019

Thanks, man, this is really helpful seeing as some of my custom-designed shields/flags...weren't exactly up to scratch. In fact, a few of them were complete crap.
Toggle signature
Back in the USSA for DH mod team: Head of Government
My Inkwell: Latest AAR: Darkest Night, Glorious Dawn: A 1944 Japan AAR (NWO2): Winner of the Weekly AAR Showcase for August 23rd, 2015
SteamID: der Metzgermeister

Thanks for your work,the amount of detail is excellent !
Toggle signature
Yo no fui

Is there a similar mode on DH FULL?
V2

Hello again everyone. I have recently finished the second iteration of this mod. I have added a new set of civil war events (triggered by high dissent), several new formable nations, a new playable scenario, and many new flags. I hope you all enjoy. I am also working on porting this mod over to DH full.

I also drop it here. I don't know who made these flags for Victoria as a mod, but they are great. Maybe you could add some of them.
https://imgur.com/gallery/kIUrq#2w63S2E

Khor said:
I also drop it here. I don't know who made these flags for Victoria as a mod, but they are great. Maybe you could add some of them.
https://imgur.com/gallery/kIUrq#2w63S2E
Click to expand...

Khor said:
I also drop it here. I don't know who made these flags for Victoria as a mod, but they are great. Maybe you could add some of them.
https://imgur.com/gallery/kIUrq#2w63S2E
Click to expand...

I think the fascist flag for Deseret in that is "Choose the Right" abbreviated in the Deseret Alphabet. That's pretty funny.
V3 and DH Full

Hello everyone. I'm pleased to announce the release of a DH Full compatible version of this mod, as well as a new update for the standard mod. This will probably be the last major update as I plan to move on to other things. You are welcome to use any assets I have made in your own mods. I hope you all enjoy.

When I form a new country (Poland, for example), events for mobilization disappear. 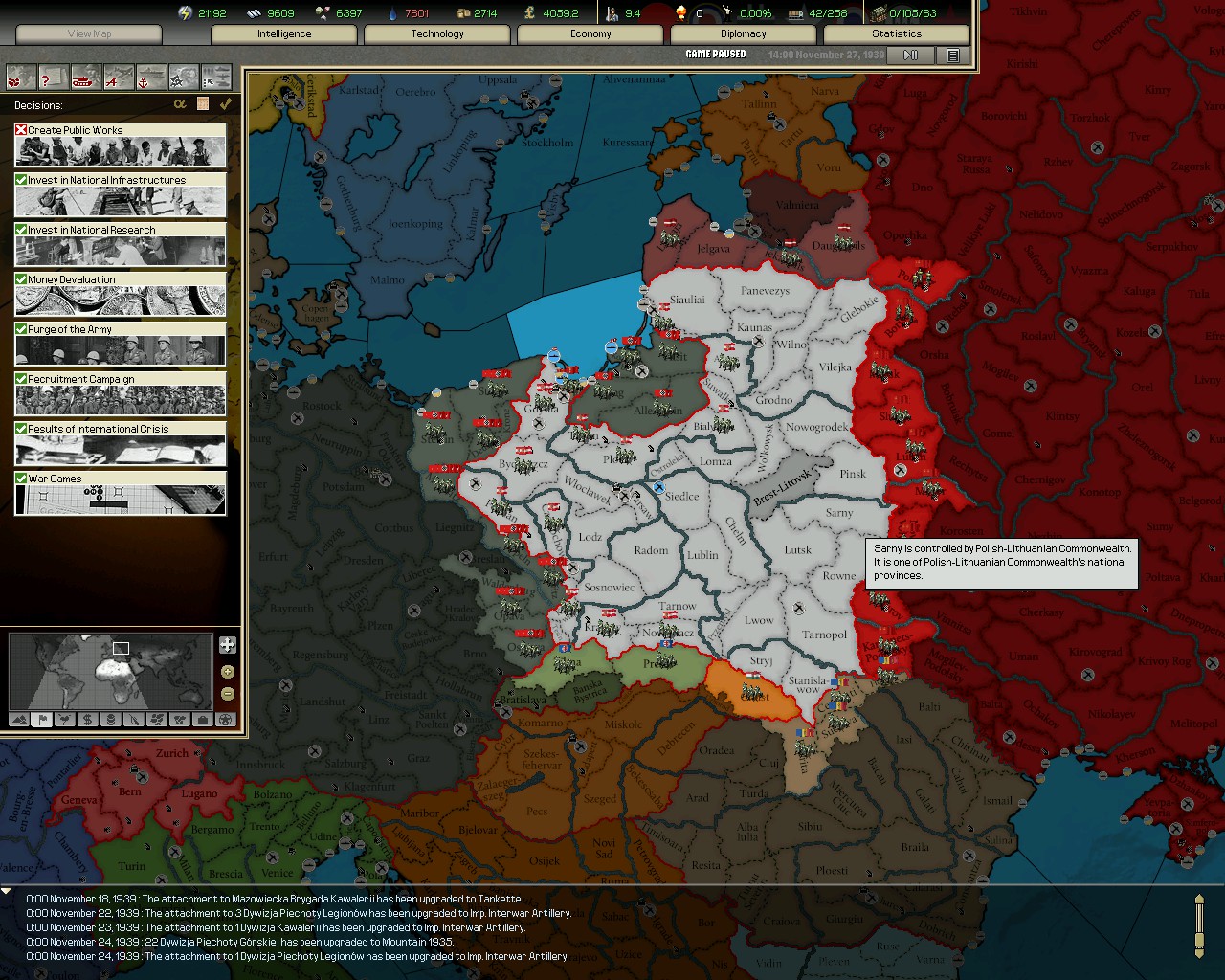 Paflagon said:
When I form a new country (Poland, for example), events for mobilization disappear.
Click to expand...

Thank you for bringing this to my attention. Luckily, this is a rather simple fix. Place these in your mod/db/events folder and overwrite the existing ones. I will also update the official download to include them.
https://www.dropbox.com/s/cs3xf4i936z12mt/mobilization fix.rar?dl=0
Toggle signature
CSMF Mod for Darkest Hour
Kaiserreich: Darkest Hour Shields Pack

As for the unit names, add this file to your mod/db folder. I will update this above also.
https://www.dropbox.com/s/o5kfcs41knefnw4/unitnames.rar?dl=0
Toggle signature
CSMF Mod for Darkest Hour
Kaiserreich: Darkest Hour Shields Pack

What mods is this compatible with?
Toggle signature
Robert Glaub
rwglaub@yahoo.com

rwglaub said:
What mods is this compatible with?
Click to expand...