Jump to latest Follow Reply
Menu
Install the app
You are using an out of date browser. It may not display this or other websites correctly.
You should upgrade or use an alternative browser.
Crusader Kings III 14947 MP Open Beta Feedback 26 Bug Report 10078 Tech Support 1363 Multiplayer 119 User Mods 1388 AARs (After Action Reports) Suggestions 4084

Hello, I am TheGib770 of the Community Title Project. Due to the holidays slowing our mod completion, I wanted to write a guide for other modders on how to get the most out of the falvorization system. We will also list a priority guide for other mods to be more compatible with each other. While we may not be the largest mod, I feel as though knowing a standard system will be helpful for the years to come.


Thanks to fellow CTP member Necro and the CK3 Modding Co-op discord for helping us find out how some things work. Also thanks to Azarias59 as I’ve been helping out with porting his ck2 mod Rank and File over to Ck3. Anything we find out will be in later GUI lessons.


ROYAL COURT CHANGED CULTURES TO NAME LISTS AND GROUPS TO HERITAGE
PICTURES WILL NOT BE UPDATED TO REFLECT THIS!


The first lesson will go over the falvorization files themselves.

In the base game file 00_flavorization.txt there are some rules listed at the top of the file. Here is a rule that isn’t listed. Unlanded characters can not benefit from the system unless they fit conditions linked to the command special =. Therefore flavor is always linked to a holder. Queen mother is only Queen mother if their son/daughter is a holder. Prince and Princesses however, keep their title if their family is deposed as long as their dead parent died holding a relevant landed title.

Code:
male or female, spouse will use the other gender is so defined.

Code:
ruler_child (prince or princesses), queen_mother, councilor, head_of_faith, and holder. This has to be defined for character types, holder is the most prevalent.

Code:
barony, county, duchy, kingdom, or empire. Not needed, but will apply to every tier listed if not defined.

Code:
Any number, allows characters to keep certain special titles like prince if holding a lower priority title. Guide below.

Code:
Use any defined name_list keys in your mod. ex name_list_anglo_saxon

Code:
Use any defined heritages keys in your mod. ex heritage_north_germanic

Code:
Use any defined religion group keys in your mod. ex christianity_religion

Code:
Use any defined faith keys in your mod. ex coptic

Code:
Use any government keys in your mod ex feudal_government

Code:
yes or no Will make title apply to only independent rulers like ‘Petty King.’ Defaults to no when not defined.

Code:
yes or no Spouse will no longer receive the opposite gender title. Good for mayors or female rulers, they will not receive the female spouse title. Defaults to no when not defined.

Code:
yes or no By default, the system will check the top liege to check for culture, religion, etc. By using top_liege = no, you can allow vassals with different religions/cultures to use their own title. Does NOT apply to spouse, they always get the opposite gender of the same conditions as the holder. Defaults to yes when not defined. 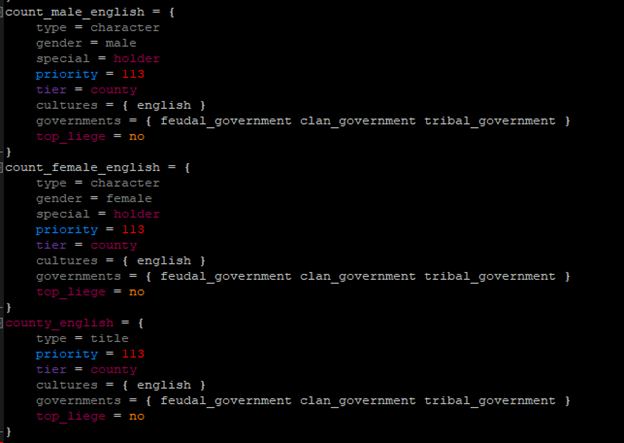 After defining some flavor keys, you’ll need to localize them. Create a file MOD_flavor_l_LANGUAGE.yml in MOD/localization/LANGUAGE/culture. After added the obligatory UTF-8-BOM and l_LANGUAGE: at the top, just write out the localization similar to below. 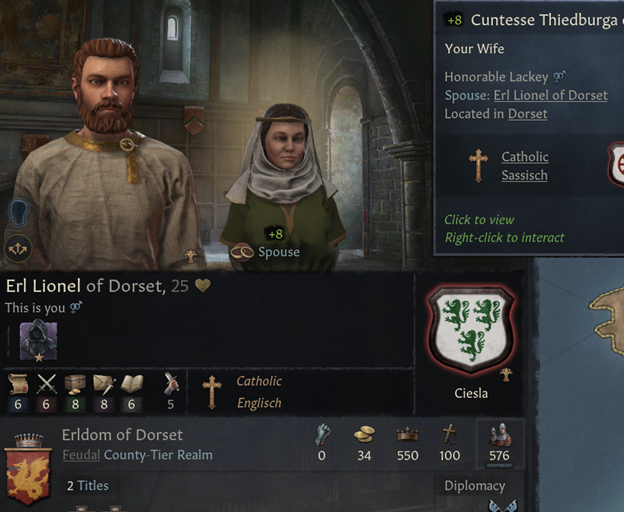 Remember you can use ruler_child and queen_mother for any tier, allowing you to create a quasi ‘Lord’ title for noble members.

Future lessons will be going over custom localization for special conditions not in base flavorization and GUI modding to change name formatting and create flavor for unlanded characters.

Tiers:​
Code:
Special for queen mother and ruler children:​
Code:
Conditions:​
Code:
Examples:​
Code:
Feel free to set high priority for head of faith titles or wiggle around in space in-between tiers. If priority is the same, last defined goes up. You can also overwrite same priority by placing your mod below in the load order.

I’ll be using CTP’s Irish Kings and Kingdoms localization as the example today, I will also be showing our mod’s most complex custom loc at the end so you can see what you can do with it.


Here is the started flavorization:​
Code:
First we are going to set up a custom loc file under MOD\common\customizable_localization. Ours is 00_ctp_kingdom.txt. Make sure it’s UTF-8 BOM!

Now we start each custom loc we want to call with a namespace. Let’s keep it simple shall we.


Code:
For the type, every custom loc used in flavorization is character type. In the last lesson I mentioned that all flavor titles are linked to the holder, including the landed title.

Code:
Now we want to set up the conditions for Sultans and Sultanates. With CTP, we decided the tenet ‘Struggle and Submission’ is the best fit for it.


Code:
Now this is fine for landed titles, but remember to include a spousal condition for your actual characters. exist = { is not needed for spouses, but you'll create errors in the log.


Code:
After setting up your conditional localization, I will recommend you set a fallback adding as the last text. 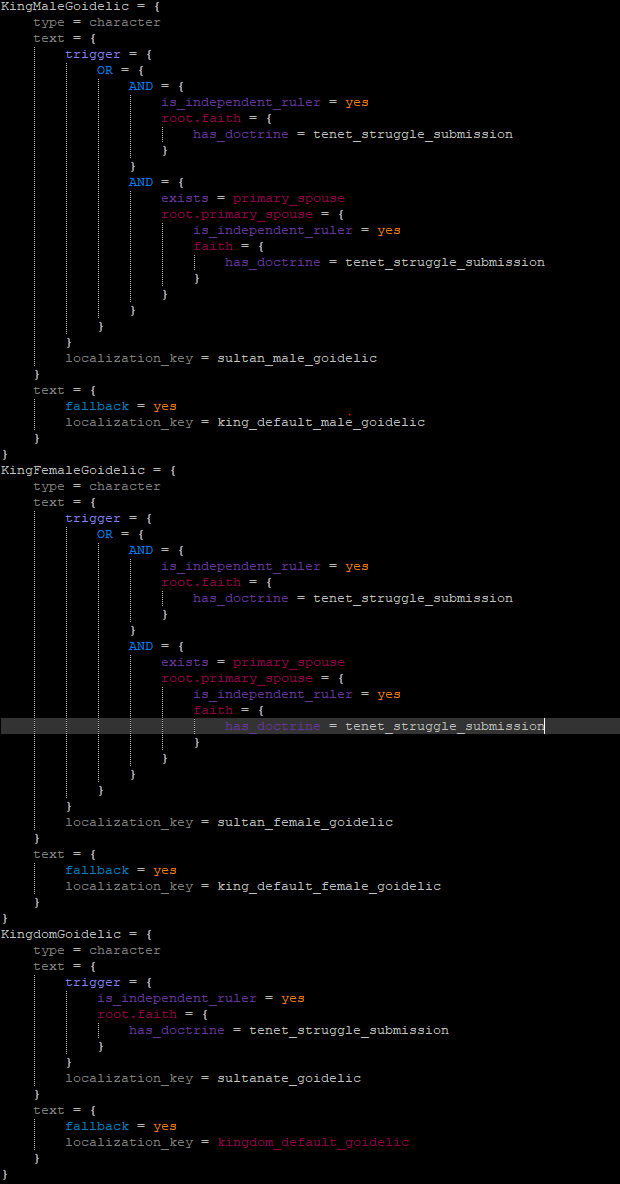 Now that we have conditions set, we will what to set all our flavor keys to call the custom loc. I will going over why we use this function in a later lesson, but for now most people can just remember this:

YAML:
Under this you can set the actual localization for your new keys.

YAML:
Perfecto!​
With custom loc you can not only use other triggers, the order of conditions sets a new priority top to bottom as well. Let’s say you want another title that effects both Christians and Muslims, you can set it above the sultan text = { to make it come first.

You can also use it to over ride independent duchy names when the holder is a king or above like so:

Code:
YAML:
Now for the complex example. I won’t be going over it but you’ll get to see what you can do. All of this is to allow dukes to have contract based titles, the ability to acquire the prince title in the HRE, HRE electorship titles, and titles for the Byzantine Theme system.

Creator of Africa Plus

This is the type of thread we need more of! Thank you so much for sharing this knowledge.
Reactions:

Super helpfull thread, thank you for this!
Toggle signature
Developer for Western Europe 1469 - The Rose, the Lily, and the Oak: Check it out Here

Gui guide is going to take a while as I'm still experimenting. However, I'll try to post a basic character yml guide, that will be helpful to total conversions, and a councilor guide this week.
Toggle signature
Managing the CK3 Community Title Project and Name Packs
Flavorization and Localization Guide
UniUI: A Master GUI Patch for CK3
Reactions:

Creator of Africa Plus

A councillor guide would be great, i can't get court chaplain flavour to work even though it should be the easiest, and my council flavour works for the most part but for a couple of positions the title displays as blank
L

Wow, good stuff. Yesterday I discovererd that flags can be used as well (at least for characters).

Black7Emperor7 said:
A councillor guide would be great, i can't get court chaplain flavour to work even though it should be the easiest, and my council flavour works for the most part but for a couple of positions the title displays as blank
Click to expand...

That's because Pdx made a stupid decision to refer to localizations of court chaplain and spouse directly in 00_council_positions.txt, so you'll have to override it.

Hi, thank you for your heartful lesson. Are there codes for Court Positions? I wish to give them some cool names. Also, how to override the chaplain's name? It seems to be bound with religions and my codes don't work. All other councillors' names are changed. Thank you!