First game, all the way to "Mare Nostrum"

Jump to latest Follow Reply
Menu
Install the app
You are using an out of date browser. It may not display this or other websites correctly.
You should upgrade or use an alternative browser.
Imperator: Rome 8727 Bug Reports 3609 Suggestions 2352 User Mods 606 Tech Support 487 Multiplayer 55 After Action Report (AAR) 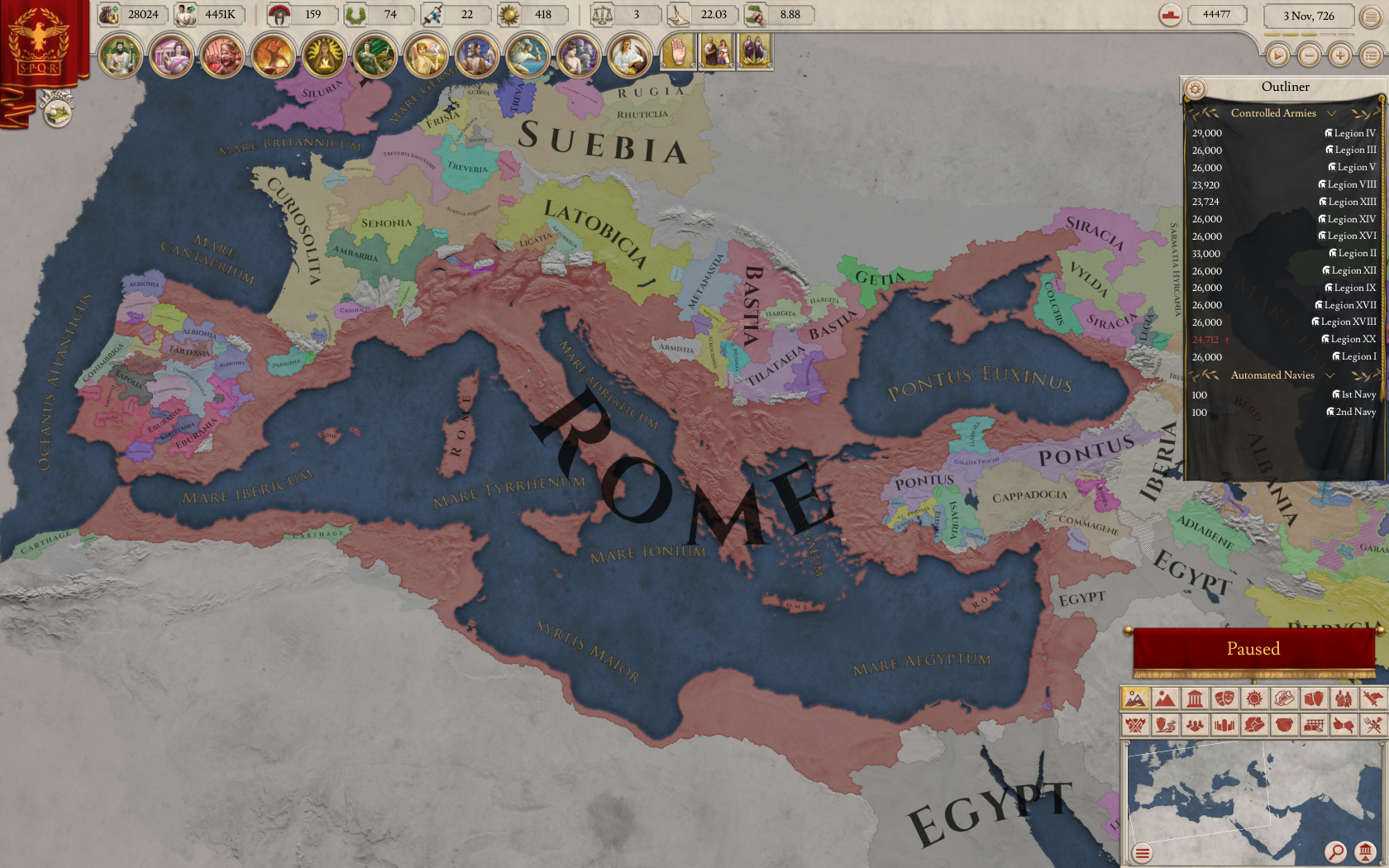 I have finally completed my very first Imperator: Rome game. Straight after the tutorial, I started an Ironman game as Rome. I pretty much ran on speed three with stopping throughout, and I assume actual game speed was also rather limited by my old Mac laptop. In total the run took me about 100 hours to complete.

My haul of achievements:
Mare Nostrum was of course the main goal. As I was running in 1.0.0 (sulla), I had to conquer part of the north coast of Spain as well. Luckily I saw that in the patch notes for 1.0.1 when I reverted. I did not expect that I had to conquer the Black Sea coast (that's not part of the Mediterranean Sea, Paradox!). I only found out when the achievement didn't fire. So with like 20 years left in the game, I had to go on a conquering run up there. I just threw mercs at the problem, as by that time I had an amazing economy. Finished, and ... still no achievement. Apparently, uncolonised cities count as well. So I had to colonise two cities up in the Black Sea region, as well as the desert strip around Iscina, between Carthage and Egypt. That one went quite close to the wire, as the price for buying points scales with your economy. I managed the achievement with a few years to spare.

The most surprising achievement for me was Garum Nobile, which I didn't aim for at all. The game just stuffs (rather ridiculously, to be honest) massive number of slaves from large scale conquests into a handful cities. And one of them apparently was producing fish...

Anyway, I think I have learned enough from my mistakes here to try a world conquest. Some day...
Z

I did the same the only difference being I didn't get the garum nobile but I did get What have the Romans Ever done for Us? I did not expect to get Envy of The World I got it by conquering Alexandria from the Ptolemy's

Well done then also to you, Zadock! I looked at the "What have the Romans ever done for us?" achievement in my game, actually. But I was only about half way on the green tick marks, and I felt time was too short. To be honest, I slacked a bit on culture conversion towards the end. I just couldn't be bothered any longer to re-set all those moron governor policies all the time. Also, I think a bunch of negative events fired in that region particularly (Maccabees and whatnot).

The last achievement I did was the "Strategic Reserve" one. I had everything to import but camels. Nobody wanted to give me any camels... So I looked, and Egypt had camels in what is now the bottom-most bit of my conquered lands in the picture. I slammed into Egypt with local reserves and got just enough war score for the camel province. Then I had to move slaves to get surplus, and bingo, camels. Probably one of the silliest reason to go to war ever: give me camels, so I can get an achievement!

To be honest, I goofed about a lot in this run. Trying things out, discovering mechanics, etc. For example, I was hoping to get some free claims from conquering the Alpine regions but that never happened, and those wars were long and costly (lots of attrition and endless tribe manpower to beat down). I also did the entire run with less than 50 AE, even though I had Italy, Greece and a bunch of other lands completely converted and assimilated. So I could have gone over 50 AE no problem. That's why I think a world conquest is doable. I conquered half of the world on a rather playful run, so all the world should be doable on a disciplined run.

One of the more interesting things I tried was to slap a social mobility policy on cities that the game was dropping all those conquered slaves in. I though if could turn those 1000+ slaves in Rome into one third citizen and one third freeman, I would have a truly amazing city. But it did not really work out. It seemed way too slow, and there seemed to be a bias towards freemen rather than citizens. I was wondering if slave to citizen was a two-stage process with that policy: first slave to freeman, then freeman to citizen. It doesn't really say so if you look at the policy, but I think that's what is going on...

Why is Carthage still on the map? Unacceptable!
Good job overall tho^^

Thanks, Maria Theresa. If Paradox says "Carthago Delenda Est", then it is. You must be hallucinating...

Just one question : you stayed as a republic all the way, or not ?

Tokimasa said:
Just one question : you stayed as a republic all the way, or not ?
Click to expand...

Republic all the way, indeed.

Truth to be told, however, I basically ignored the politics side of things. I did not try a single time to make some faction win or have somebody elected as ruler. I accepted any bonuses on offers for political favours, indiscriminately. I think I passed like three or four laws total, just for some general bonuses I liked. I occasionally had to wait for tyranny to decay, but that was mostly from overruling governor policies constantly. Whereas I simply did not care whether the Senate approved my decisions, ever. Most disloyal characters I simply bribed, some I overlooked and they eventually died. I think two of them raised an army ... which then just stood around in the country and did nothing. (Well, actually one of them helped me in a war a bit... but I think that's fixed now.)

Characters really only played a role in appointing researchers / government council / generals / admirals, according to optimal stats. Annoyingly, the leading families invariably kept dying out (why? no idea... perhaps I inadvertently clicked on a birth control tech right at the start...). So I had to refresh them from conquered countries now and then to keep getting good stats.