Menu
Install the app
You are using an out of date browser. It may not display this or other websites correctly.
You should upgrade or use an alternative browser.
Stellaris 43530 Bug Reports 23483 Suggestions 13534 Tech Support 2235 Multiplayer 336 User Mods 4177 Stellaris AAR (After Action Reports) Console edition 978

Thoughts on completing a game.

(Yes, I actually managed to play one; medium galaxy, forget whether it was middle or lower difficutly, but I think I had max AI nations.)

(Save file appended in case anyone wants to have a look, especially if it might help with performance checks.)

I created a Fanatic Spritual Pacifist Megacorp. Never tried pacifist before; probably won't again, either, given how hard the RNG screwed me in start-up. Three jump away from my starting planet was a maruyader enclave, a materialst crowd a little further north who immediately blocked my way, and I wasn't quite fast enough to get down south to stop another crowd (albeit one prepared to be reasonable) from cribbing another chunk of space. Past the increasingly hostile materialist crowd was a Rogue Servitor Sol (soon to become a vassal of the afrementioned). Past that, a SECOND load of Maruaders and a isolationist FE.

South, past that one friendly civilisation, was two more MegaCorps (both xenophobes), a xenophobe empire and a fallen machine empire! So, I had exactly ONE lot of people I can trade with and put Branch Offices on and because of the closed borders and pacifism, I was completely and utterly stuck.

When I finally rolled wormhole tech, it lead to the force-spawned xenophiliac-pacisfist empire... Which was next to another megacorp who had already filled them with branches. And a hivemind, and more xenophobe megacorps...

Eventually, through dint of power, I managed to get the nearest xeniphobe empire and those materialists on my side, but I only managed to get a few branches established.

At that point, I more or less gave up, and just let the rest of the galaxy fight it out, while I just sat and teched up quietly in the corner. I made it through the game without exceeding my Admin Capacity, despite the game been extremely late before deciding to give any repeatables for Admin capacity.

When I FINALLY rolled mega-engineering and was able to repair the ringworld, I was actually in a position to snowball in the last 70 or so years of the game, starting by colonising an ecumenopolis.

I was edging for a score-victory, but the the crisis triggered in the 2487.

The Unbidden were a game-killer with the L-Gate and Gateway problem - they didn't spawn near me, so I was basically buggered. I made a couple of attempts, but I just couldn't get anything there fast enough in enoguh force to do anythign without it turning into a long (and potentially performance curshing) slog. I was close enough to the end of the time-out that it was actually faster just to go bak fifteen years (!) and save-edit their timer past 2500 - even while I found it playable, it was slow enough by that point a lonmg-drawn out war against the Unbidden would have been excruciating, especially given the fact that it was so many regular jumps away. I just wanted to get the game done!

(And leave my thoughts/feedback, especially for any of the dev team who might happen by in the interests of making at least an attempt to contribute, especially as so many other folks can't seem to play at the moment.)

(So much so, I basically left it running and just tabbed in while I wrote this!) 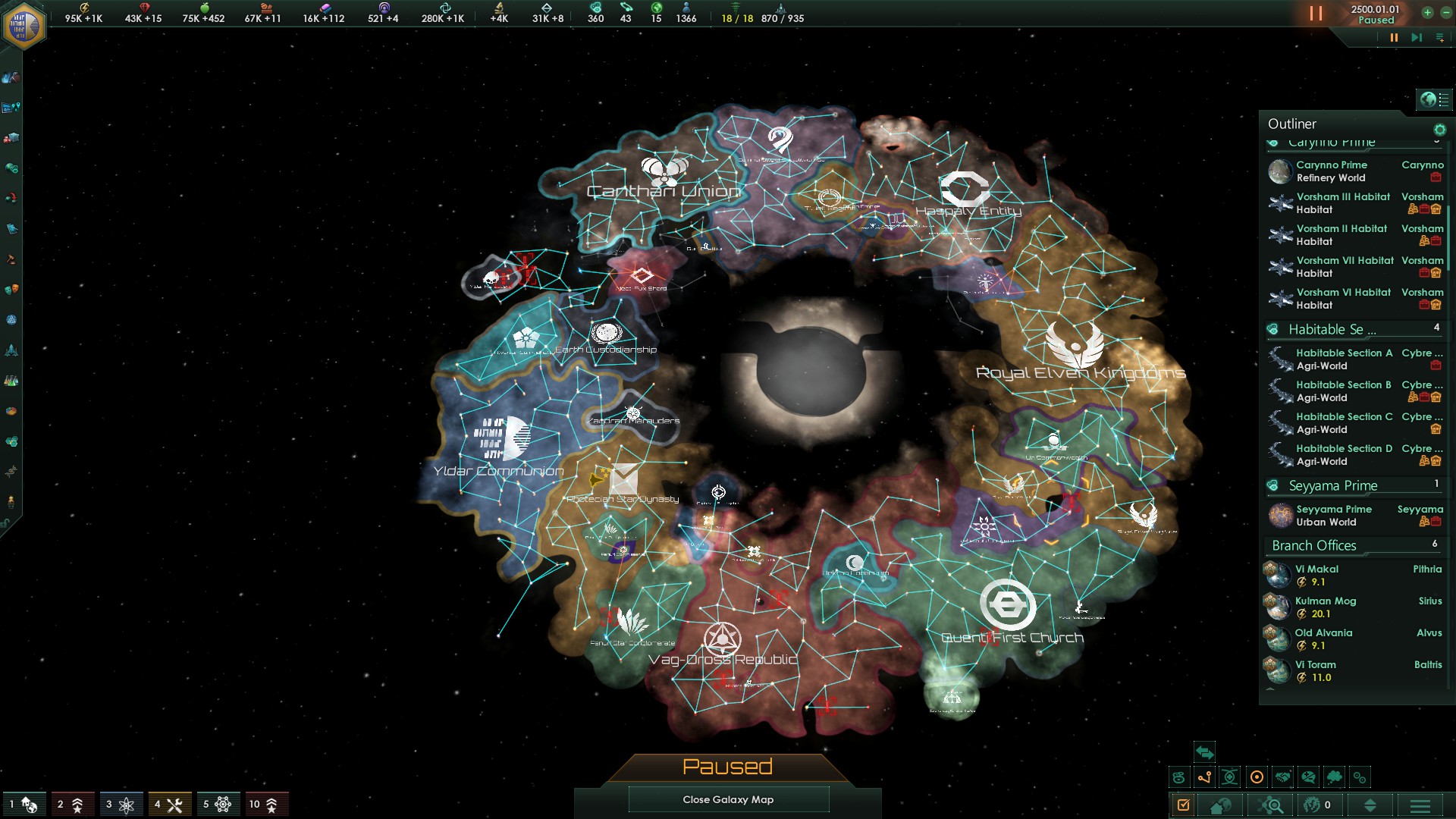 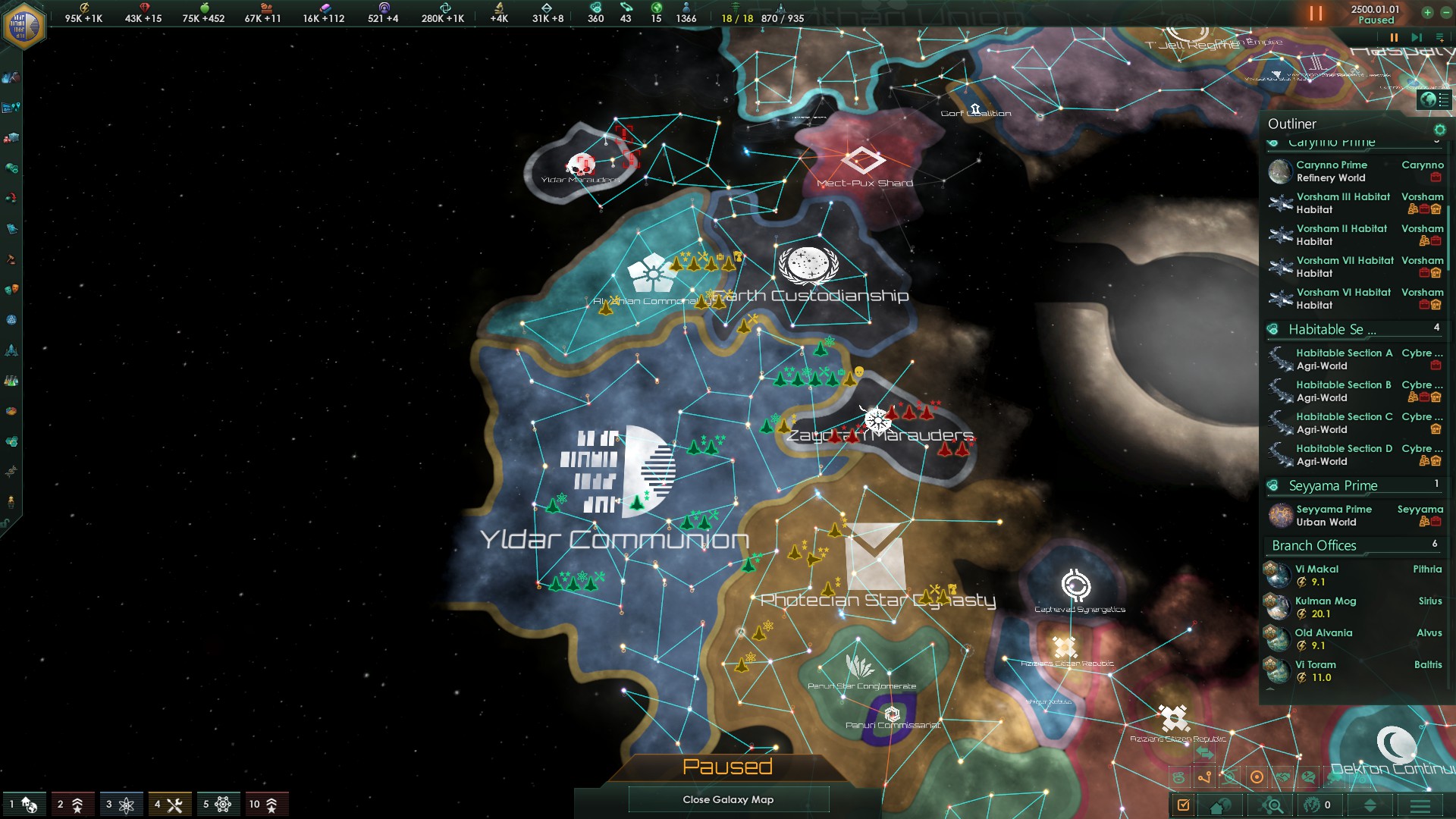 (The Unbidden spawned, by the by, in the left most offshoot of the Quenti First Chursh into the Vag-Dross Republic.)

And I finally got to see a Stellaris victory screen.

I was expecting something a bit more like EUIV. I mean, it's marginally better than SotS' "you won" splash screen, but... I want my statistics, dammit! (Firaxis aslways seems to understand that (most of the time...))


So overall impressions, then:

First off - the changes to the planets and economy are enormous - that's big one. WAAAY better. You actually have to manage you planets now. not just set-up the building queue and never revisited except to click the upgrade queue...

I do like we have an end date that we can set now. The open-ended-ness "until you conquer the galaxy" felt like you were never going to complete a game, because by the time you'd beaten the end-game crisis, everything else was just mop-up.

However, there are still lots of things that need to be looked at. In no particular order:

*Even on the beta patch, while my game was playable, there was some stutter moving aroud, and notibably running slower and worse later on. I however, completely avoided opening any lL-Gates (not that I could get to any...) nor building any Gateways. (In the last five years, the AI did build a couple, and the game didn't immediately tank, so there was that.)

*The jobs section of the population could use a button to open the individual pop section - not only is it not obvious the bar opens this, it doesn't even always work. (In fact, it wouldn't hurt to make the whole planet screen window just a fair bit bigger full-stop; I don't see the reason why it needs to be a small window in the first place.)

* The population growth always picking the least represented means that for a large multispecies empire, population species basically becomes utterly irrelevant, ans it is essentially impossible to do anything with them. This is my empire - not even a xenophile or egalitarian, and look at all those species.

My primary species Yldar - has barely gown at all, instead, all the little tiny pops get created. It's not a good system, especially with all the half-breeds around now. 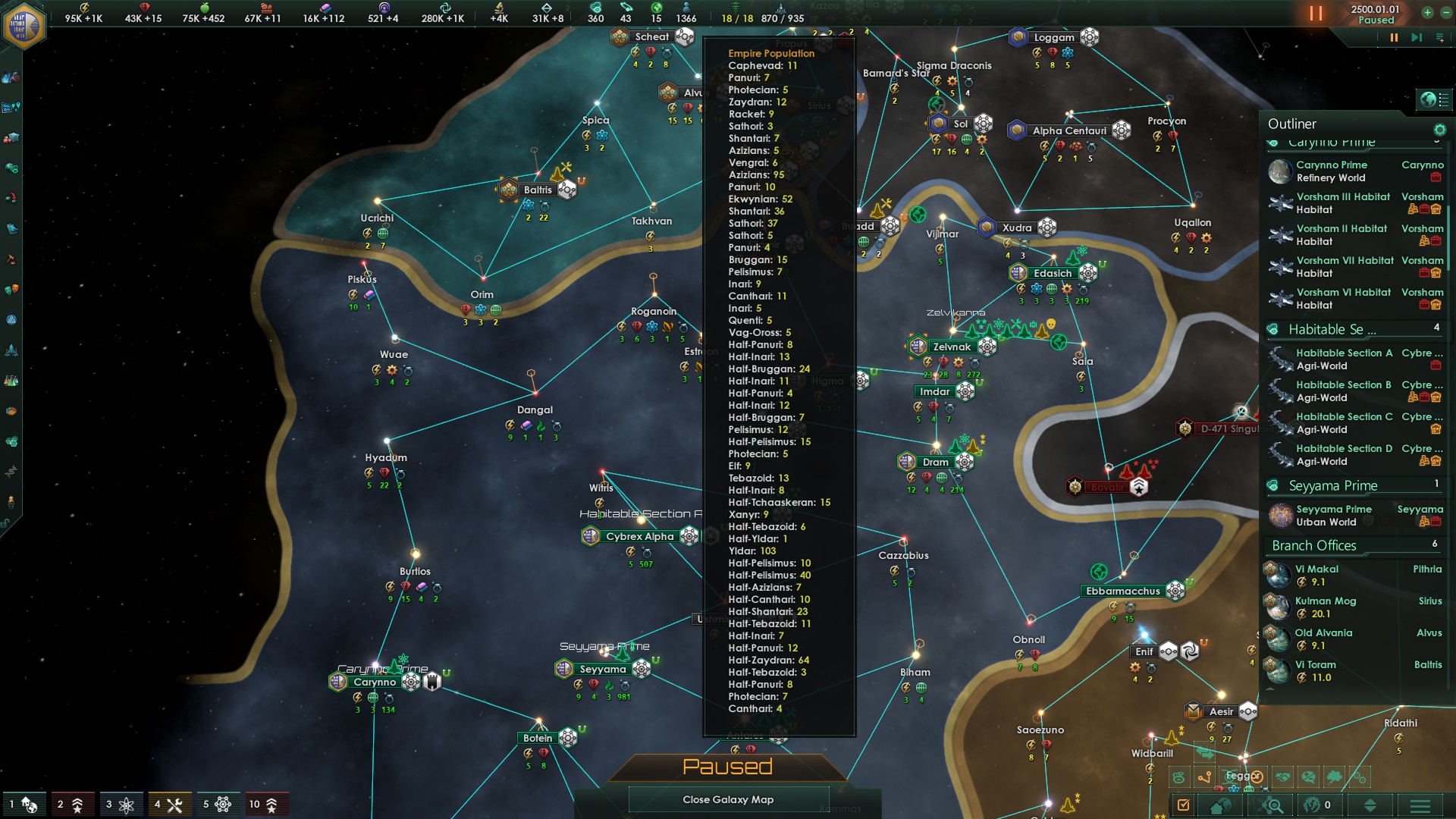 Bear in mind that likely the majority of them half-species will becoming from the one xenophile species in the galaxy, which is on the diametric opposte side to me. We need more control over what species grows.

On the flipside, doing it manually is, while less busy-work than the tile system, too much micro-management for even me - the picking script needs to be improved. Either by maybe just adding a favoured species tag (which say gives you 80% that species and 20% the current system) or just make it more proportional to the planetary (or empire) popaultion spread.

* Quality of life improvements on the resettlement windows. Sort the unemployed pops at the top, not the bottomm for starters, they're the ones you're gonna want to move most.

At the very least, we could use it remembering the destination planet used last, so you don't have to do every time when you're filling up an ecumenoplis. A tag on the planetary level, like the month trades system, to go "resettle any new pop to [this planet] is you can afford it" would be favourite - it's going to be something we do anyway, might as well make it less painless.

*Tall play seems very starved of minerals. I didn't take galactic wonders, only Voidbourne and Master Builders and without being able to create mines on habitats or rignworlds (I found the Cybrex homeworld), it was only in the later game where I had enough cahs to just throw at monthly mineral trades that I wasn't running a permenant deficit. Space-based resources become increasingly irrelevant - I think they could getting the boost from the repeatables, maybe, or something else. I mean, obviously, it is possible to survive - I did - but on higher difficulty levels, it might be a lot harder.

*Relatedly, I am defintely coming to think that three perks on habitats and megastuctures (voidbourne, galactic wonders and master builders) is maybe one too many, considering the ascention paths are only two, and we now have Arcology project. Either that or we we should have so more perk slots.

*It only occured in the last couple of years of the game, but I realsied I have no idea how to deal with crime ona fll ecumenoplois. A size 20 world with master of nature of 23 districts full of people (317 pops) and only sixteen buildings to give 'em jobs... It was past the point I cared much, as the planet spiralled into a crime-wave (hitherto, crime had been such a non-issue I'd not built a single enforcer buidling, so I don't know much they would work to reduce that - I had built a load of strongholds for the fleet cap on my ringworld habitations, though, so...)

*Megacorps - especially pacifict ones - are very dependant on their surroundings; if you have a bad start like I did, you more or less lose access to one of their whole government features.

*Does fleet cap have a repeatable? Or was I just really unlucky in the last ten or so years of the game, since it never seemed to come up once.

So, that'll do me for Stellaris for a bit; might have another go when Machine Empires are up to spec, I wanna try a determined exterminator! (In the meantime, I REALLY need to press on and finish my first CK2 game, it's been 438 hours and two years...!)