Menu
Install the app
You are using an out of date browser. It may not display this or other websites correctly.
You should upgrade or use an alternative browser.
Europa Universalis IV 75458 EUIV: Suggestions 16015 EUIV: Technical Support 5685 EUIV: FAQ & Strategy Guides 183 EUIV: AAR's, Let's Plays, and Fan Fiction EU IV: Alternate History Short Story Contest Contr 26
Show only dev responses 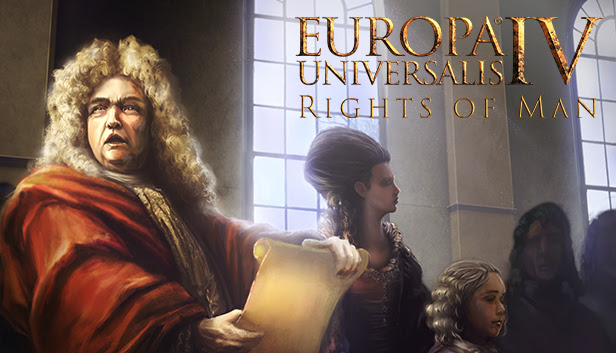 The latest expansion to Europa Universalis IV lets the world’s eight greatest powers throw their weight around with new diplomatic options, including forcing others to break their alliances or giving friendly foreign monarchs a boost to their stats. But becoming a Great Power means balancing expansion with technological prowess and development.


Rights of Man includes:
As always, Rights of Man’s release is accompanied by a free update for all Europa Universalis IV owners, and this one may be our biggest yet with a complete overhaul of two major game systems – technological progress and cultural acceptance, plus other updates that apply to owners of certain other expansions.

What's in the collection?

That moment when you have to wait another week for the bank to issue you a new debit card.
But it's ok. I will wait. We have known each other for a long time, you and me, EU. We've been through everything and even if I wasn't always there you know I have been faithful and in spite of all the bugs and problems we had over the years I never stopped playing you. I will wait. For this is what we do. We wait and we chase and we suffer the little evils life displays to us. A week. A month. A lifetime. It wouldn't really matter EU. It really wouldn't. For nothing else matters.
Toggle signature
So close, no matter how far
Couldn't be much more from the heart
Forever trusting who we are
And nothing else, except Victoria III matters
Reactions:

Have fun betatesting y'all! I'll wait for the obligatory hotfixes.
Toggle signature
"Go then, there are other worlds than these."

I bought the collection from Paradox Store My Steam Key doesn't activate from my Paradox Account!
Reactions:

Fredman's Epistles is an old pack not new. RoM collection pack includes all of them except fredman's songs.
Reactions:

seriousgigi said:
Fredman's Epistles is an old pack not new. RoM collection pack includes all of them except fredman's songs.
Click to expand...

new events! comet sighted!
Toggle signature
If there are a lot of typos I'm on the couch and i'll fix thrgmbel//
My low character is not the subject of Greek Plays!
#willyoupleaseshutupaboutyourlightningrodsalready

cool time to play the day away
Reactions:

So, the collection does not contain the music DLC, that has to be purchased separately?

Polskers said:
So, the collection does not contain the music DLC, that has to be purchased separately?
Click to expand...

Weeell...I still should leave game if i want to start new or restart unlucky run. Are there any plans to fix this?xD
Toggle signature
Thou shalt not make a machine in the likeness of a human mind.

It wasn't on steam and after restarting then it was. It was update queued and after a restart now its downloading!

The 'turn it off and on' tactic is a winner throughout the ages.

Very dissapointed in the price tag. The new expansion for Endless legend has a -25% discount for prepurchase.

And their bosses are SEGA, widely known for their dlc-whoring. If Sega is being more customer friendly, you have an issue
Reactions:

Tragically despite the great feature list this is going to be the first DLC for EUIV that I don't buy instantly. £14.99 just seems too much for DLC such as this no matter the feature set. I complained bitterly about the Beast Lords DLC for Warhammer: Total War being around the same price and that actually had a new separate campaign and entirely new army roster (although both were admittedly fairly mediocre).

The previous DLC for EUIV Mare Nostrum for £10.99 was the only one I've bought where I actually felt ripped off and this seems to be following a worrying price inflation trend.

Conversely I picked up Reapers Due for CK2 for £7.50 and felt entirely happy with that purchase and what I received.

I'm writing this because I always been a huge paradox fan-boy and tried to get as many of my gaming friends as possible into Grand Strategy (they'll thank me eventually) but with price points like this I don't feel as comfortable recommending it to others.
Reactions:
Show hidden low quality content
You must log in or register to reply here.
Share:
Facebook Twitter Reddit Tumblr WhatsApp Share Link
Top Bottom