ludna said:
I'm not able to raise tribe host regiments as Horde, previously via the estate interactions. Only +20% man power. Fail. After one year. Fail.
Click to expand...

So, 2 down votes. Did you find the option ?
Reactions:

How about we get EU V already >:<
Reactions:

Just played for more than 5 hours without realising the Estate interactions window had a scroll bar!

Enjoying the expansion so far though
Reactions:
Z

no unit pack for Croatia and Bulgaria? that's a bit sad..
well, i hope the next DLC bring some love to this nations.

1) if you are thinking about buying using paypal on steam I suggest you use the Paradox store instead. I had repeat failures on steam - everything looks good then fail for unknown reason at which point you need to go to help then purchases then cancel and try again. After multiple attempts yesterday I finally got the main Emperor DLC. Today I went back and tried to buy the emperor content pack. Purchase through paypal linked to my credit card failed again multiple times for unknown reason. I then went to the Paradox store and purchased using paypal linked to the same credit card and the purchase completed without problem.

2) I then went to steam and registered the product key for the content pack. Steam seemed done then a popup came saying failed to install but when I start the game and look it says installed. Have not tested in game.

3) Last issue is I have my paypal account linked to my credit card with an alert set up for purchases outside of the USA. Apparently the sale of the content pack through the Paradox store ( and maybe steam not sure) does not provide a country code to the credit card company and so it triggers an alert. It did not stop the purchase but I did get an email alert. This did not happen with the main Emperor DLC.


I respectfully suggest Paradox consider fixing this country code on the Paradox store for the emperor content pack and talk to steam to make sure they are not losing sales on steam because of the issues above. I have never had any problems in the past buying from Steam or the Paradox Store.

Is actually $26.70 in UK and $30 in Eurozone given today's exchange rate. (with the unit DLC)
Expand signature
When Black Death hits, is such a great opportunity to be a tyrant, either all your vassals are dead by the end or your character is, win win!
Reactions:

Good morning.
After checking https://steamcharts.com/app/236850#All I want to congratulate the devs and players for hitting all-time peak - 47,844!
Reactions:

Overall, I'm incredibly happy with this expansion-- far more so than I've been with any other, assuming you patch it soon so it stops constantly crashing. So thanks for that! Your hard work really paid off.

But also, why on earth did you kill Weapons Quality Standards? Who would ever pay a mil point a month for +5% ICA? I could maybe, maybe see +15% ICA as justified, though even there, that severely powers down Innovative Ideas. What's the point of even taking the idea group, now? With this change, it's useless outside of roleplaying, and now Prussia is even more absurdly overpowered relative to every other nation.
Expand signature
Brékkek Kékkek Kékkek Kékkek! Kóax Kóax Kóax! Ualu Ualu Ualu! Quaouauh!
Reactions:

Who wrote the ideas for Bregenz? I LOVE them :-D
Reactions:

While the monarchies and republics, the estates are getting better, the trading republic still has the same bonuses from the factions as at the time of its appearance. Trading cities (which stand out from their own land) are not even entities. Well, do something with this already. And even parliament is not allowed. Nothing is allowed

Wolfrex said:
While the monarchies and republics, the estates are getting better, the trading republic still has the same bonuses from the factions as at the time of its appearance. Trading cities (which stand out from their own land) are not even entities. Well, do something with this already. And even parliament is not allowed. Nothing is allowed
Click to expand...

This particular issue may have something to do with the fact that Merchant Republic Factions seem to be based off of Chinese Celestial Bureaucracy mechanics, rather than on Estates. Still, should be fixed.

I'm not quite sure if it's a bug, but on resolution 1366x768 the interface doesn't take all the space, and leaves little room to see in some places 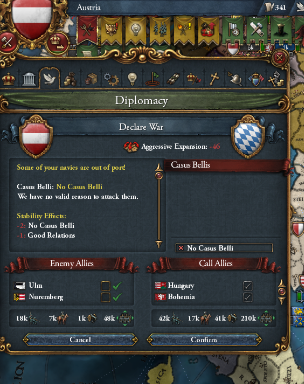 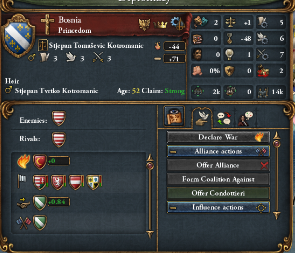 Strato31 said:
I'm not quite sure if it's a bug, but on resolution 1366x768 the interface doesn't take all the space, and leaves little room to see in some places


Did you just declare on Bavaria when they have glorious ULM as their ally? You're gonna get crushed in a month!
Reactions:


Did you just declare on Bavaria when they have glorious ULM as their ally? You're gonna get crushed in a month!
Click to expand...

I obviously would NEVER DO THAT, I am not suicidal ! This was just as an example to show the interface.
However, it seems that by this action I may have insulted indirectly the REAL EMPEROR, and will as such resign from the throne, to live a modest peasantly life in the fields of Wien, cultivating potatoes happily and until my death. Glory to ULM !
Reactions:
A

Hello. I notice some problems about expeling minorities mechanic. Or maybe it is how it is supposed to be, you tell me.
So now when you expel minorities you don't convert that province anymore to your primary religion and culture. Am i supposed to colonise more then 1 province for it to happen? Becouse for now i don't see any reason why would anybody do it other then rollplaying purpose.
I think there is also an age bonus or something that makes it free, but it is already free at the game start...

Another question is about the burgundian inheritance.
Is there any chanse now that Spain gets the lower country throu an event, or i need all the timw to just take it piece by piece? (
To avoid coalitions with 100 countries )
Reactions:
A

Zanetich said:
no unit pack for Croatia and Bulgaria? that's a bit sad..
well, i hope the next DLC bring some love to this nations.
Click to expand...

I personally hope for some love given to asian and african countries. Too many of them have no mission trees and no flavored events.
I tried Warsangali once and it is so boring..
We need flavor to Asia and Africa!
Reactions:

Hello, so I'm playing as Austria in the new patch (without the extension though) and I've encountered a few problems.

I'll detail the situation more thoroughly below, but for a quick summary :
- the landfriede reform, if revoked, doesn't allow internal HRE wars again
- when an elector throne is inherited, I inherit the electorship as well
- 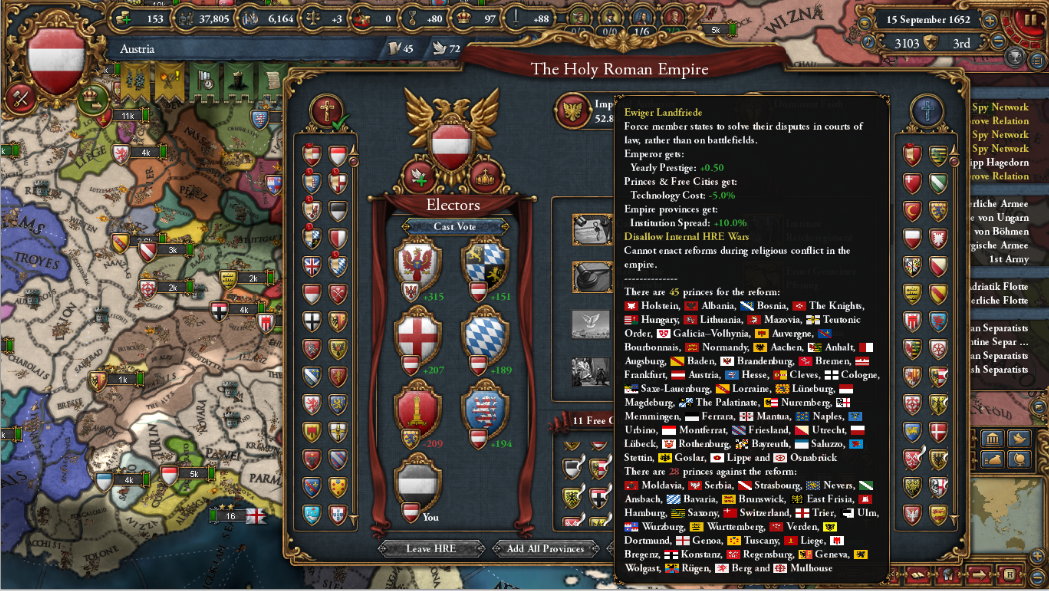 The first one I'm not sure is a bug, but I inherited the throne of Bohemia, which was an elector, and became an elector myself (thanks for the achievement )

The following is more problematic.

This is the situation : The landfriede reform has been passed, before the league wars. My imperial authority declining because of all the heretic princes, I find myself happy when they finally start, because I will then be able ask them gently to respect the damn church. However, because of the landfriede, the protestant league leader cannot declare war on me. I manage to get 50 imperial authority, and to solve my problem revoke the reform. However (maybe it's a feature but it seems weird) I still can't declare on any member of the HRE, and neither can the protestant leader.
I decide to force convert as many princes as I can by proxy wars so I can get so imperial authority back, and continue the reforms without winning the league war. Problem : no reforms can be passed during the league wars…
I dont know if they automatically end after some time, but I've reached the age of absolutism and religious peace is nowhere in sight.