Welcome to the 33rd Development Diary for Europa Universalis IV, where we go into details about Ming China, the great dynasty that ruled over as much as a fifth of the world’s population in 1444, and dominated East Asian politics and diplomacy until the arrival of Western traders.

China is a country we tried to make interesting and unique in the Divine Wind expansion for Europa Universalis III, and we are keeping some elements of those changes. But we’ve refined them to, again, emphasize player choice and flexibility.

China
The Ming Dynasty ruled China for about 300 years, from 1368 till the Manchu conquest in 1644 (founding the Qing Dynasty). The Ming have traditionally been held as one of the high points of China’s long history, Chinese art and literature flourished, the government reinvigorated the ancient system of civil service examinations to seek new talent and great trading voyages that drew tribute from as far away as Africa.

By the game’s start in 1444, however, these merchant adventures have stopped and China has turned inward. The scientific progress of the Song Dynasty has slowed, and the rise of an anti-trade faction of bureaucrats has weakened the power of the eunuchs that championed this expansion. As we will see later, managing these factions will be one of the great tests for you as a Chinese leader.

Strategically, Ming China is in a good position. It has almost limitless manpower and can field vast armies. There are no neighbors that are in any position to do it serious damage, and even a coalition of four or five of its neighbors will find it difficult to put a dent in the Emperor’s glory. Only the rise of a continental power on the western steppes is really an issue. Until the Europeans show up.

China’s biggest problems will be internal. Her size means that the grand armies will need to be stationed throughout the empire because it can take a while to march from one end to the other. China’s history of division and independent warlords means that a mass rebellion could lead to the secession of Zhou or Wei rival kingdoms.

For the Ming, stability is paramount. Stability guarantees smooth sailing and the blessings of the Mandate of Heaven.

Mandate of Heaven
China has a unique government form called Celestial Empire, reflecting the Chinese belief that a well-governed kingdom was evidence of divine sanction and blessing, whereas a poorly governed or tyrannical one was evidence that the Emperor could be deposed.

The Celestial Empire alone gives the Ming a 3 point reduction to their revolt risk. But as long as China is not in negative stability and the ruler has a decent legitimacy, they gain the Mandate of Heaven, which gives a 10% discount to increasing stability, and another 5 point reduction revolt risk. As you can see, positive stability leads to even greater security; the Ming Empire is secure, confident and the people will remain quiet. But if you rely too heavily on this power to keep rebellions down, you may see a negative stability hit cause great damage. Never count on your own mystical awesomeness.

If China westernizes though, they lose all those benefits and begin to face severe internal problems. If your government has been propped up by respect for tradition, then you will pay a price for breaking from that. Be prepared.

Faction System
In Europa Universalis 3, China had a faction system that limited what they could do. Certain factions prevented colonization, others wouldn’t let you declare war, etc. This did not make for fun gameplay, especially since the nature of the factional drift could mean that you were unable to face a growing problem because of advisors you had no control over. It is always more fun to be doing things.

In Europa Universalis 4, you can always do everything as China, but depending on which faction you have in power, you remove some of the penalties that China faces for having a Chinese Bureaucracy. This feature is a list of problems that the hierarchical and rigid traditionalism of Chinese government poses or you. Each faction disables a few of the penalties.

The faction and government system is entirely removed when China westernizes, and the country transforms into a feudal monarchy.

Events
The events for Ming Chine are a mixture of religious, reformation and political events, from "The Arrival of Jesuits" to "The Closure of China" and "Qi Jiguang's Army Reforms". They will affect the country in many diverse ways, bringing factions in and out of favor and add that extra spice that flavors the game so exquisitely.

National Ideas
China starts with 10% more trade power generated by their provinces, and 10% cheaper ideas.When China has earned all their ideas, they get 30% faster decay of bad relations. The National Ideas of China are designed to help it gradually overcome many of the issues connected to its size and poor tech development. A stronger military that can draw on better national income should keep the Ming vital even when the Portuguese and English come knocking.


Bonus Feature: Debt & Loans
Debt is something that every EU player has learned to fear. We all remember learning the game and encountering that slow spiral into bankruptcy that can just gets worse and worse until death comes to an otherwise successful game. After all, what harm can one loan do, we asked ourselves. Then one became two became five. EU players were cautioned to avoid loans whenever possible.
However the truth is that, historically, debt wasn’t necessarily all that bad for countries, only excessive debt was. So we’ve made some changes to the debt system.

At its core, it’s unchanged. You borrow money whenever you want (and automatically when your treasury drops below zero), you pay interest on that debt every month and at some point you pay it back. So far, so good. You know this stuff.
The main change we have done to the debt system that you can pay it back at any time you like, instead of hoarding your wealth until the bankers come knocking in five years time. You do need to pay the interest as well as the principal for the remainder of the loan term; this isn’t a cheaper workaround. And, if you can’t pay back the debt on time, it simply rolls over, and there is no interest increase.

This is there to make money management easier. Debt is no longer something you need plan for years in advance so you know you’ll be able to pay it off. It is something you get into when times are tough and pay off when you are able to.

When you are fighting a war and know your economy will recover eventually, you can recruit huge armies of mercenaries based on loans, for example.
Bankruptcy is still possible, but you need to be in a staggering amount of debt and facing a major economic catastrophe for it to trigger. The consequences, of course, are ruinous.

Great ! I'm loving it, I don't play with China usually, but I think I'll give it a try !

I like this, from what I read the balance seems about right to force China to think twice about Westernising asap.

So that's where Quill got his intro tune from!

Love the change to the faction system - It really did feel limiting in EU3.

Edit: I'd love to see a short diary on the Native American nations and how they deal with the European encroachment.
Expand signature
I also go by Mansen in the Steam groups.

"I understand making a converter takes effort [...] should be free!!
Maybe the game studio "Paradox" is named in honor of its fans.

"They caved harder than an enthusiastic spelunker with a season pass."
NextGame - On the topic of Obsidian's Limerick Drama​

The improvements for China and loans look good!


Johan said:
China's biggest problems will be internal. Her size means that the grand armies will need to be stationed throughout the empire because it can take a while to march from one end to the other.
Click to expand...

Will the ai be able to deal with rebels better than EU3? I can remember rebel-hunting armies walking from Canada to Peru to deal with some rebels and back again through attrition-heavy lands....
Expand signature
CKDV maps to reorganise your empire and create new titles:
Map with duchies
Map with kingdoms

Will be the name of dynasty also the name of China?
Thus when a new dynasty arrives it will change to it?
i.e. Song > Ming > Qing
Expand signature
Never underestimate the power of Google

How moddable are the factions? Will it be possible to make events/decisions which removes a faction and adds in a new one?
Expand signature
"Thank you for breaking things this badly, it made it much easier to perceive and fix the problem without internal debate." -Malorn

What about the Qing ? does this mean that if we choose to start after 1644/1683 with the Qing dynasty we will be a simple feudal monarchy ?

Otherwise great DD, I played a few games with china in EU3 and it was already quite fun, now it looks even better.

I'd have imagined that there would be prettier gfx for the factions rather than the same rather plastic looking EU3 gfx.
Expand signature
"MUGANI DESU KA, ONI-CHAN

I also like the proposals for the debt & loan system.

Another question. How is influence determined? Since sliders has been removed, is it now purely based on ruler stats?
Expand signature
"Thank you for breaking things this badly, it made it much easier to perceive and fix the problem without internal debate." -Malorn

Except the eventual events and player intervention (by spending the points to favor a faction or another), does any faction's influence tend to increase at a moment or another? Or those two are the only means to change factions' influence?
Expand signature
A mod with a huge potential: Phoenix (ex-Steppe Wolf, ex-CSP) (11 A.D. - 2010 A.D.) with Victoria II map

Are you serious? For the sake of sanity, please, PLEASE change it to military faction and get rid of that silly description:wacko:

P.S. Did you forget about kung-fu? You don't want to piss those monks off do you?

Nyrael said:
Am I the only one who dies laughing while reading the Temples Faction description? XD
Click to expand...

Glad to see the faction system won't be a total drag. Early repayment of loans is also quite welcome!

I presume Zhou refers to the Wu Sangui's "Great Zhou Empire" in the 17th century or maybe even a revival of the Red Turbans which were in EU3's timeline but not EUIV's, but who are the Wei? I hope it's not one of pre-Sui states.

What about this "loans -> inflation" thing?

How much do one or two loans increase inflation and how can I counter that?
Expand signature
There is no "r" in Memmingen and nothing closing in Lands-hut ...

Will the faction influences be totally player controlled, or are there modifiers which increase or decrease their influence? The system seems kinda arbitrary.

A screen from music video: 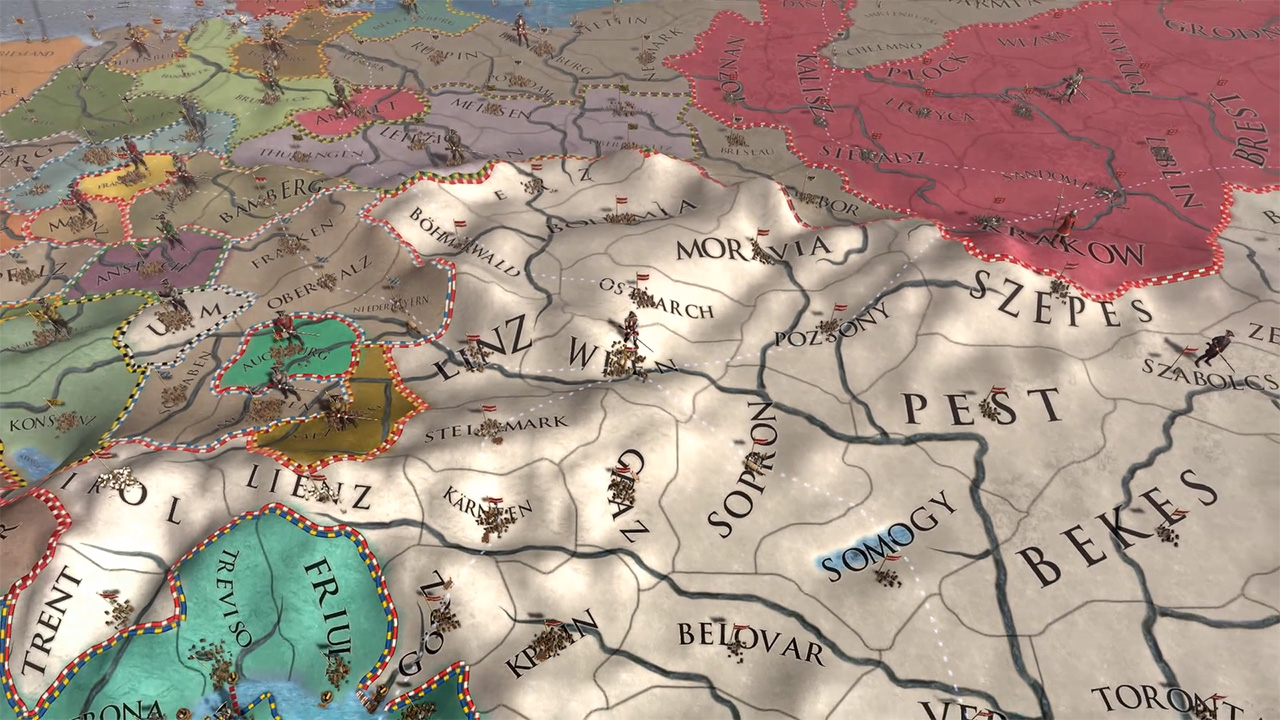 You have said in the second Dev Diary, about map:

Johan said:
At this point, we haven't yet come to the phase where the borders will be tweaked, but our ultimate goal is to make borders feel smooth and adapted to the real life terrain and historical borders.
Click to expand...