Menu
Install the app
You are using an out of date browser. It may not display this or other websites correctly.
You should upgrade or use an alternative browser.
Europa Universalis IV 74550 EUIV: Suggestions 15702 EUIV: Technical Support 5551 EUIV: FAQ & Strategy Guides 176 EUIV: AAR's, Let's Plays, and Fan Fiction EU IV: Alternate History Short Story Contest Contr 26
Show only dev responses

Hello and Welcome to another development diary for Europa Universalis IV. As it is another one written by me, it might be a bit shorter than you’d like, but I hope the information is interesting enough.

One of the things we wanted to focus on with Leviathan was to strengthen the ability to play “tall”,or in other words, how to become more powerful without necessarily expanding all the time. We talked in an earlier diary about the first of three new features regarding playing tall, Expand Infrastructure, which allowed you to stack multiple manufactories in the same province.

---
Today we’ll be talking about the second of the ‘play tall’ features for Leviathan, as we delve into Concentrate Development.

This will reduce the development in that area by an amount comparable to a horde razing it, and then that development will be distributed to your country.

Fifty percent of that development will be going directly to your capital, while thirty percent will be distributed randomly among stated provinces, while the final twenty percent is lost.

There is a cooldown of 50 years for how often you can do this in an area.

Doing this to one of your subjects will upset them and also increase their liberty desire, so be careful.

There are also two government reforms that makes this loss less painful, as it removes the twenty percent lost, and instead adds that development to the capital.

Speaking of the Mandala Reform, it's a first tier reform, that besides giving you free development concentration also grants the following. 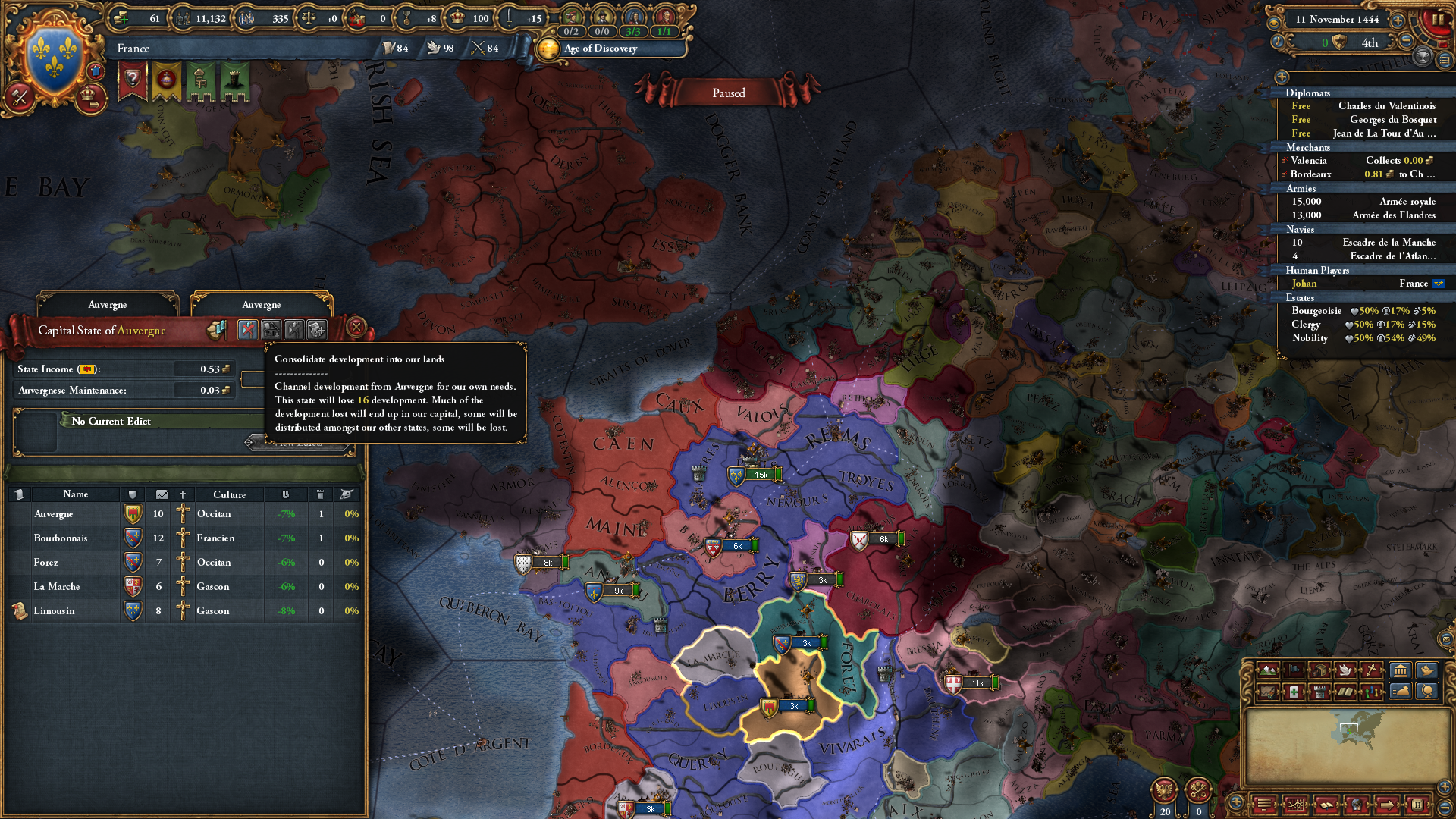 Connected to this, is a new peace treaty called Pillage Capital!
As sometimes you want to grow your power, and weaken your enemy, but you do not want to take on more territory. In that case, just use the new “Pillage Capital”(™) peace treaty, which will concentrate development on their capital state, benefiting you!


Stay tuned for next week, when we will talk more about playing tall, and maybe something about canals.
Toggle signature
Johan Andersson
Studio Manager Paradox Tinto - Follow me at Twitter!

a bit of details maybe?
Reactions:

Can I use the consolidate dev option and then loot my enemy or I have to wait 50 years? Does looting the enemy's capital still give AE? if so about how much are we talking about? If you can either sack your own territories or you can sack an enemy capital, then this entire mechanic will be used to sack enemy capitals when the AE is too high and no one will sack their own lands.
Reactions:
R

Can Pillage Capital also provide Power Projection if done on a rival? Hard to think of a more personal way to dab on them.
Reactions:

The tooltip should be clearer and show us the exact % AND the dev in numbers, so that we know if its worth it, without opening first a calculator and the wiki.


second - what reason do I have to pillage, if it also gives me AE? The 2 reasons most of the times not to take land is not enough "monarch points" or having to much AE - the AE should be at least massivly lowered (or at least the balance need to be checked carefully, otherwise its another "feature" that noone can really use) - and the tooltip in the peace treaty should be clear explaining that.
Reactions:

As concentrate development has a cooldown of "50 years" there is a big chance that I miss it -
Can I use this interaction for PU-Lands as well? Because Vasalls will not life for 50 years most of the times, but with PUs needing 50 years before even starting integrating, it would be a possibility -
Is the AI rebulding the dev over time, that has been taken away from them? Otherwise it would only hurt yourself in the long run?


Don't get me wrong - It is a good thing, that playing tall gets more attention and creative ways to support that, I just fear from that informations that its not completly balanced or user friendly
Last edited: Yesterday at 10:17
Reactions:

Johan said:
Connected to this, is a new peace treaty called Pillage Capital!
Click to expand...

This honestly sounds amazing! The first thing I'm going to do is start a new campaign as England; consolidate all the mainland territory before selling it off, and then pillage the entirety of Europe. Never mind the AE; what are they gonna do, invade me?

I usually reach some point in every campaign where I'm content with my borders (typically quite early, to be honest), so this mechanic gives a great incentive to keep waging wars!
Reactions:

That pillage capital treaty may get brutal (in multiplayer). Besides favoring tall play, this is also a way to massively punish tall players. For more wide people, you can take lots of dev without unrest or coring cost, and totally cripple the tall player. High dev provinces are sometimes difficult to take, as they require loads of warscore, coring cost and sometimes are difficult to convert. The concentrate dev interaction is a bit in the same boat: it seems more like a tool for wide players to reduce coring costs. There is even the comparison with the hordes, the most widegoing strategy there is.
Toggle signature
Better tall play with a simple solution: new modifier suggestion
Proposal for an Ulm achievement
Reactions:

Johan said:
Fifty percent of that development will be going directly to your capital
Click to expand...

Is this your capital province or capital state? Is there any limit to this?
To stretch the point, could one, at game start, consolidate the entirety of England to boost London to 70 development or so? (As I read it, the cooldown of 50 years is on a single area, not in general.)
Reactions:

wobarch said:
what reason do I have to pillage, if it also gives me AE?
Click to expand...

Considering the focus of this feature is to make it viable to play tall, an AE hit isn't that big a deal. I don't see the intent as being to make it something that a min-maxing player would do instead of taking land. Though even then, getting a bunch of dev in core provinces of the right religion and of an accepted culture seems like a bigger benefit than just sucking up land that will take a while to not be worthless.

I wouldn't say Concentrate Development is really a tall feature though, as you'll have more opportunity to use it the bigger and more influential you are. I guess the idea is using the intended vassal gameplay in SEA you can use it on vassals to dev your cities.
Reactions:
M

I hope to god that hover-over tooltip is gonna give some numbers and percentages instead of a useless vague description..
Reactions:

Pillage capital seems really weird. There is already a peace term for that not take land purpose: Humiliate or even Show Strength. Also it is being a peace term extra weird. We have sack events already, that is also another weird thing. Finally, I can't imagine this represents what exactly. It's exactly like razing but nations that do raze already have that ability. Everyone is a semi-horde now? Imagine France bringing home the English population like slaves with chains after "pillaging" London. I really don't get it.