Hello everyone, and welcome to another Europa Universalis development diary. We are now working fully towards 1.16 and our next big expansion. While I’ve always been the lead designer for EU4, I’m now the project lead for this expansion, as Wiz has moved to another project.

One of the biggest changes in concept is the introduction of sailors. Sailors represent the trained seamen of a nation. Sailors differ from manpower both in what they are used for, and in how you get them. Only coastal provinces provide sailors, and the amount of sailors depend on total development in that province. Sailors are required when constructing new ships, and when ships are “repaired”. Of course not all ships require the same amount of sailors, with heavy ships needing the most and transports the least.

Docks and Drydocks now provide 50% and 100% more sailors from their provinces instead of increasing forcelimits, while Shipyards and Grand Shipyards have been redesigned to increase naval forcelimits & decrease shipbuilding times in those provinces.

Natural Harbours and Coastal Trade Centers increase the amount of sailors you get from a province, while Merchant marine now gives +50% Sailors & Press Gangs now give +20% Sailor Recovery. Some nations also have ideas giving them more Sailors from their provinces with Netherlands and Norway having the biggest boosts at +25%. There are also policies, parliament issues & norse gods boosting your sailor pool as well. 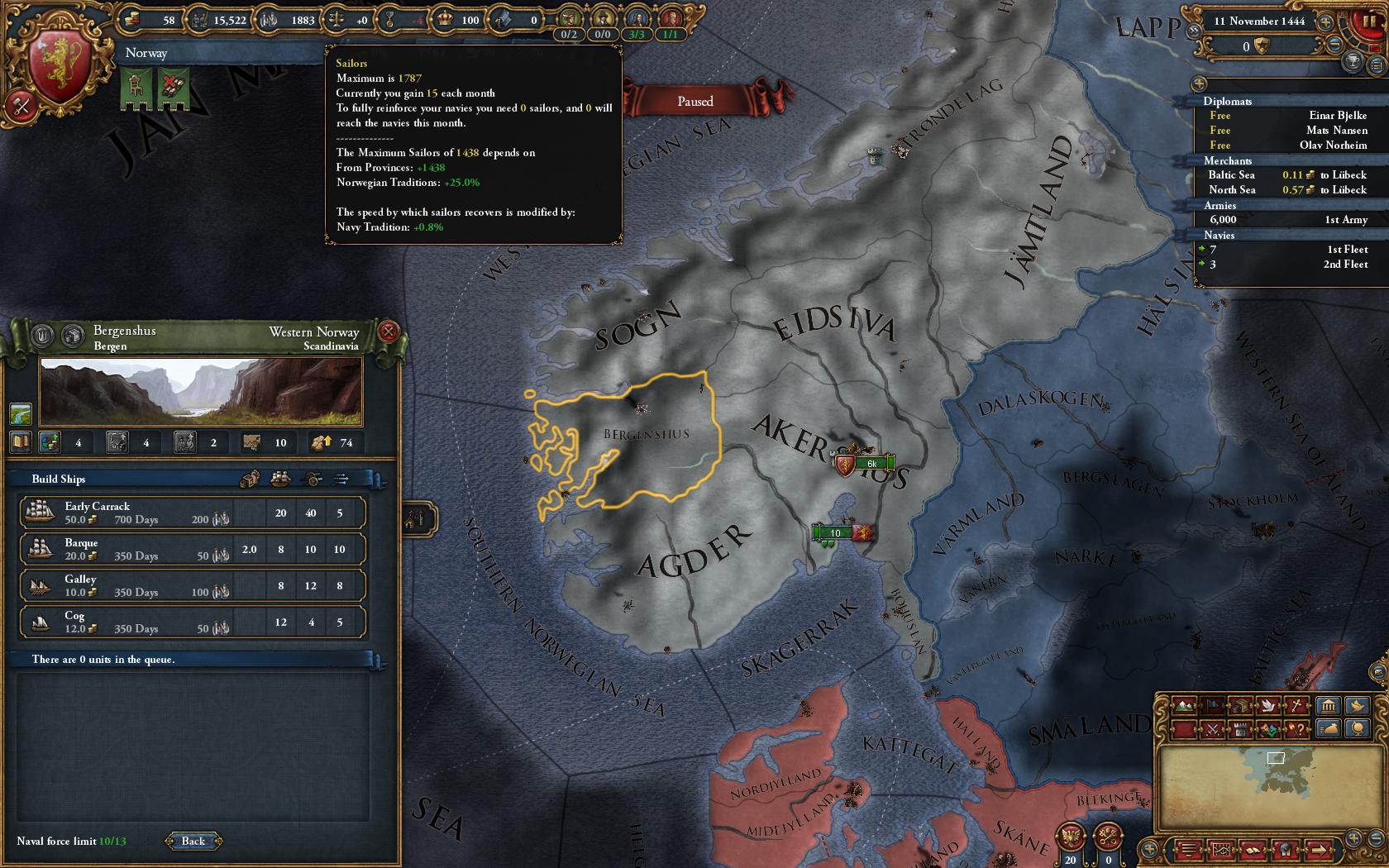 If you have the expansion, you also gain sailors from occupying another nation’s coastal provinces, even if your maximum possible pool is not increased.

One of the most feared things in europe in this time-period was the arrival of slave raiders from the north african coast. Countless villages were razed and millions of europeans were sold in slavery in Algiers, Tunis, Tripoli & Istanbul until the European nations were finally able to stop it at the middle of the 19th century by simply conquering the North African coast.

Now Barbary Nations lose their 10% cheaper ship tradition, and they gained the ability to raid for slaves. Raiding for Slaves is now something fleets can do at sea, where they gain money and sailors from coastal provinces that are not their allies or subjects. To raid a coastal province, you need be able to blockade it with that fleet, and you can only raid a province once every ten years. The efficiency of raiding is reduced by fleets on pirate hunting patrol. Raiding of course hurts your relation with the owner of provinces you raid.

The reason for why you get sailors from raids, is that plenty of them historically ended up chained to an oar at a galley. 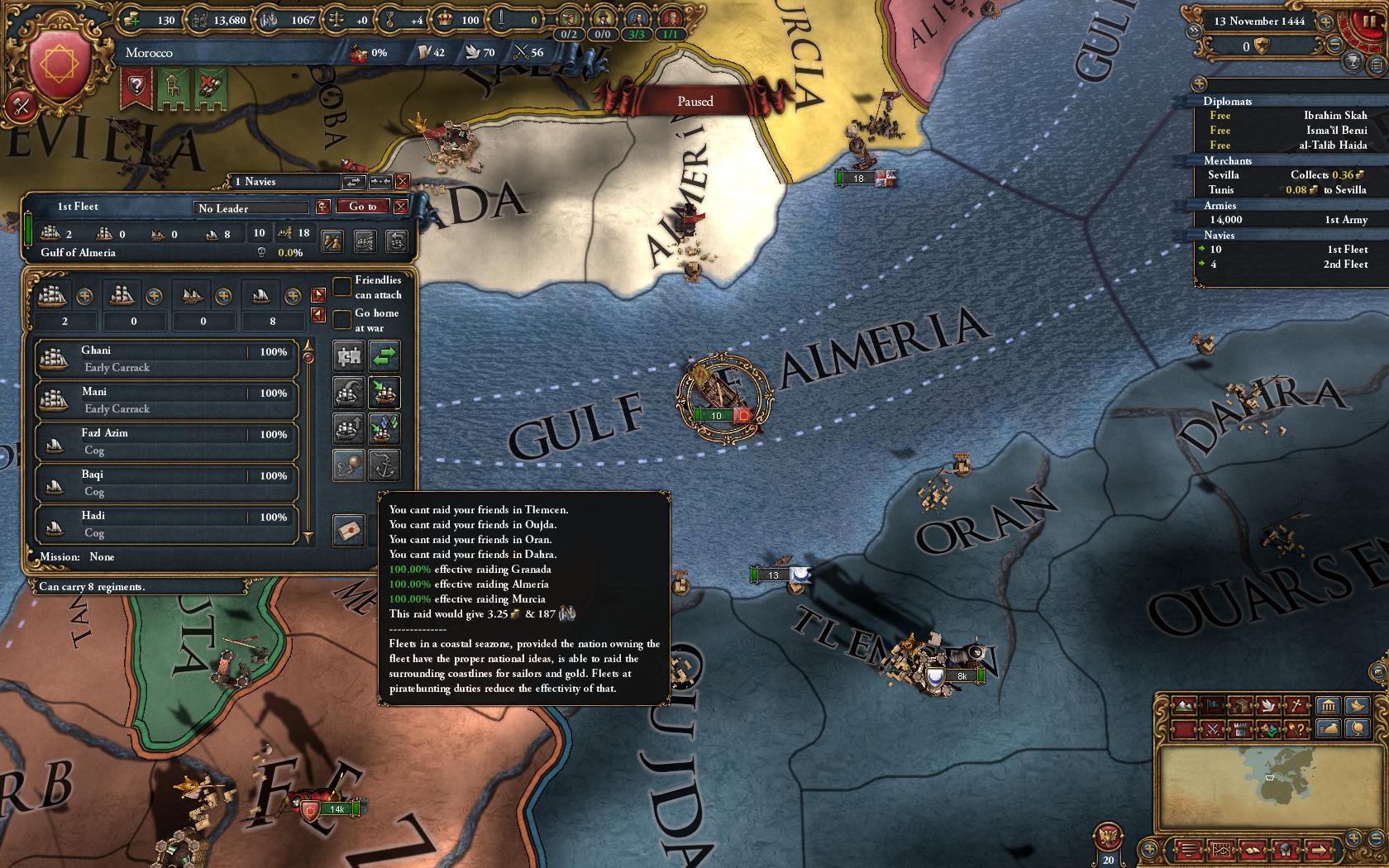 Next week, we’ll take a deep look at how we have redesigned the espionage system.
Expand signature
Johan Andersson
Studio Manager Paradox Tinto - Follow me at Twitter!

WOW 6:30 is ok if you work from your home
That early cant even log on properly.

Now on topic - glad to see that now trade ships use less sailors than galleys. Will use them as screens in my fleets when the patch goes live.
And a question - what will happen if you have undermanned fleets ?
Last edited: Feb 4, 2016
Reactions:

Whoah. When do you wake up then?
Expand signature
Tenet of Y'thoth
Ethos: Materialist 2; Xenophile 1.
Traits: Intelligent ; Quick learners; Repugnant

Well, it's around 2:30am for me...
Expand signature
PDS Rules of Thumb:
A Patch/DLC bundle is NEVER Savegame compatible.
There is NO Mod that can update upon day of Patch/DLC release.
Jupiter is a yandere.- aruon
I'm just Danish. Mistrusting Sweden is my default setting.--Moglus
Jake will be CEO by then and Johan a cyborg.-- Paradox in the 2040s
Bacon Simulator 2019 is coming!
Reactions:

What does that little letter icon bellow the raiding one mean?
Maybe we can send letters to Santa now, to get various present bonuses. If you have been naughty (presented by a future "Naughty and Nice" meter) you get coal, giving ill tidings.
Expand signature
Tenet of Y'thoth
Ethos: Materialist 2; Xenophile 1.
Traits: Intelligent ; Quick learners; Repugnant

So is this fully an expansion feature or do sailors become a thing in the patch?

Also, is mothballing reworked or does it effectively "waste" sailors due to required repairs?
Reactions:

Espionage system, eh? You have my attention ...
Reactions: It's „can't“, not „cant“.
Expand signature
I am a proud bearer of The Fourth Cookie for Services to Syndicalism ● and The Grand Service to the Kaiserreich Mod Cookie *
You're new to this negotiating thing, aren't you? It's simple. You beg for mercy and offer me gold, and I say no and take everything you ever loved. And the gold.​
Reactions:
T

I wonder what the icon with a percentage left to the Monarch Points is. Last update there was something like that floating to the right of them.

It looks to me like a bag of coins that's bleeding. "Bleeding money?" Corruption?
Reactions:
F

I don't actually know how I feel about Sailors. I'd have liked to have seen Barbary nations lose their hostile core creation cost instead of the other tradition, but raiding could be interesting.
Reactions:

Looking forward to the redesigned espionage system. Will we be able to use spys without having to get the idea?
Reactions:

Are Sailors part of the free patch or an expansion only feature?

What about force limits for ships? If you are using slaves, maybe you should slightly increase force limits/maintenance cost? Buff the Morocco and Tunis.
Reactions:

Seems interesting, can you clarify, is raiding something only the North Africans can do or are the just better at it? How is it unlocked? Who are you limited to doing it against? does it drain the province loot bar when they raid?
Reactions: