Good morning! After last week’s dev diary on Ayutthaya, we’re taking a voyage across the sea to Java, home of what remains of the Majapahit Empire.

Majapahit once spanned nearly all of Maritime South-East Asia, ruling over countless vassal states and tributary kingdoms across the isles. The empire reached its golden age under the administration of Gajah Mada, a renowned statesman and military leader who vowed to conquer all of Nusantara for Majapahit. 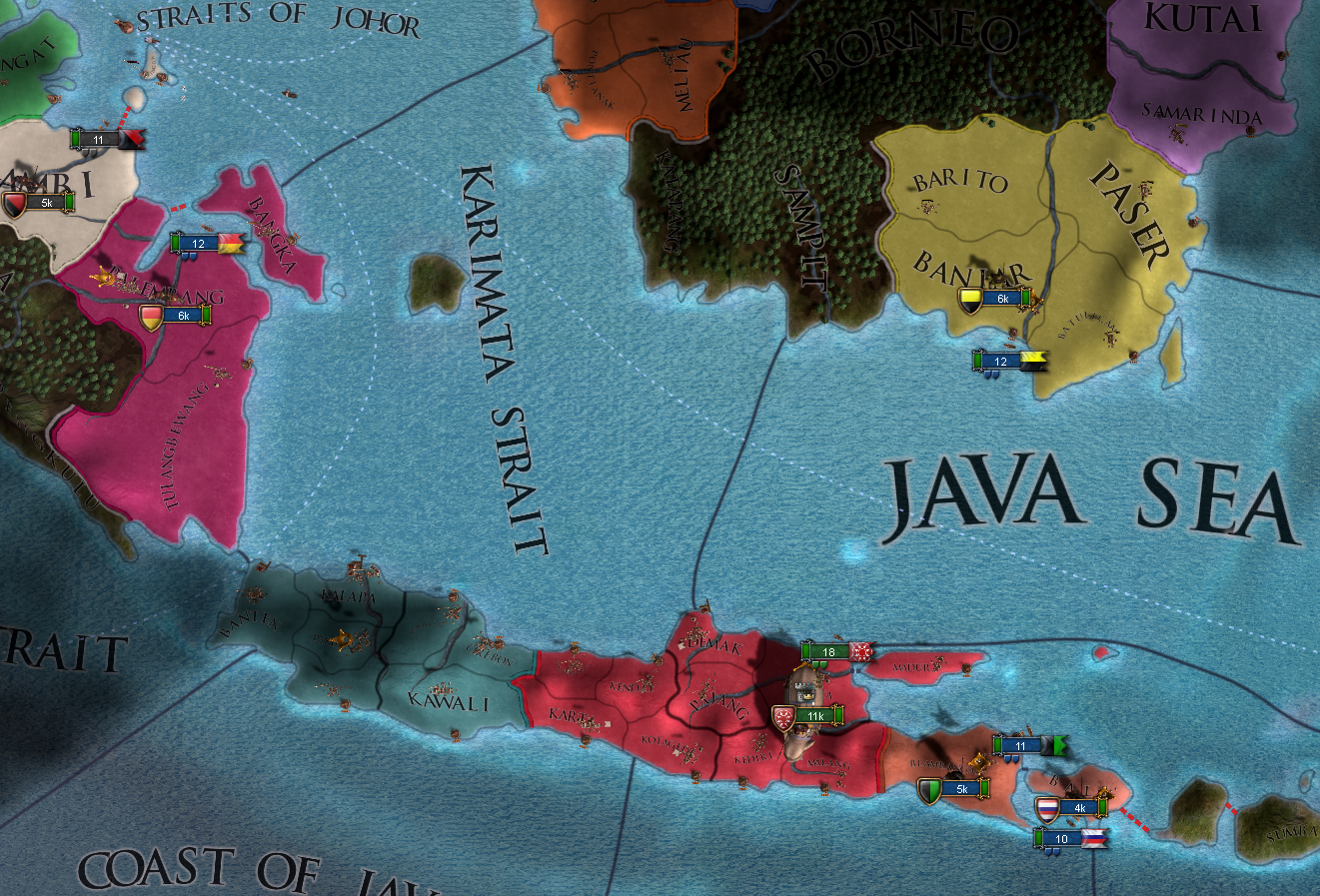 It has been almost a century since Gajah Mada left office in disgrace after attempting to subjugate the Sunda kingdom against the wishes of both monarchies. The Chinese treasure fleet expeditions of Zheng He severely disrupted the balance of power in the region, with many kingdoms taking the opportunity to strike out on their own and the Chinese supporting the rival Sultanate of Malacca in the west. The Majapahit Empire in 1444 is in a state of severe decay. Only a few of its tributaries remain loyal, a series of bloody struggles over the succession are imminent, and religious tensions are rising. The last remaining tributary states are Blambangan, Bali, Banjar, and Palembang - for owners of Mandate of Heaven, all nations in the Chinese tech group can now have Tributaries regardless of religion. 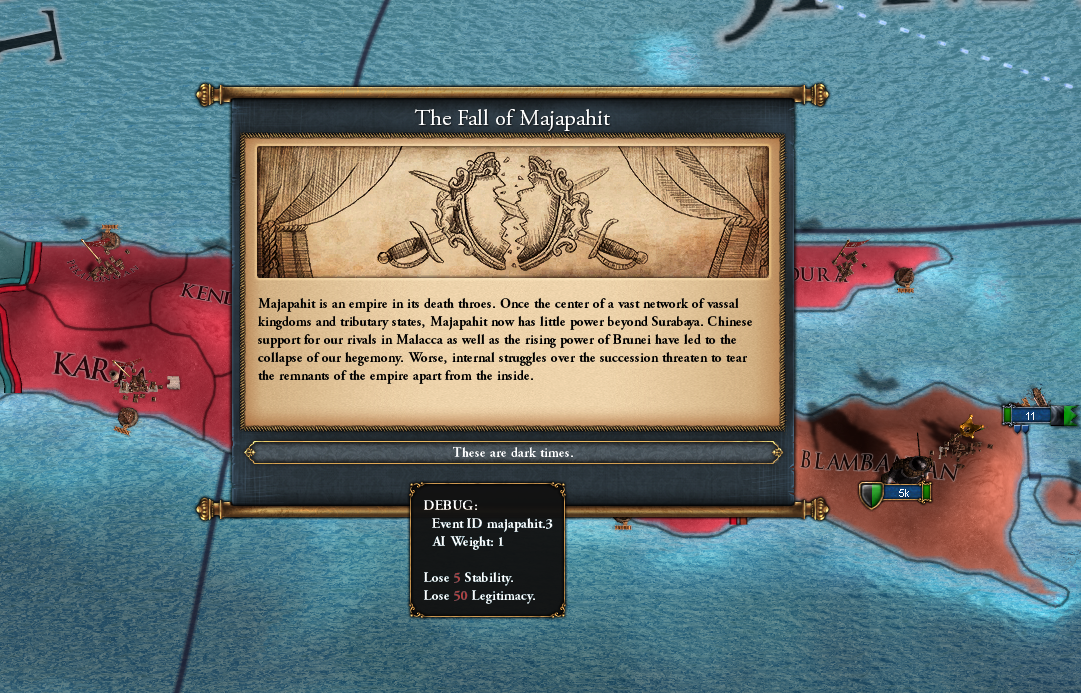 At the very start of the game, Majapahit begins a unique Disaster that puts them on the road to total collapse if not managed carefully. This is intentionally one of the most difficult disasters in the game, immediately tanking your stability and legitimacy, while also adding a modifier that increases all power costs by 15%, reduces monarch lifespan by 50%, and increases the liberty desire of all subjects by 15%. As always, numbers are not final and I’ll need to play around with this to get the difficulty level right - navigating this Disaster should be a challenge but not an insurmountable one. In addition, every succession will be challenged by a Pretender and events will further increase the Liberty Desire of subjects, who will become independent if their Liberty Desire becomes too high. After dealing with these effects for a while, you’ll be approached with an offer of financial aid from a group of Muslim merchants who wish to trade in Majapahit. Accepting their offer will provide a much-needed influx of cash, but also causes the periodic conversion of your provinces to Sunni Islam. Rejecting this offer causes Majapahit to become diplomatically and economically isolated, with penalties to your diplomatic reputation and trade power. 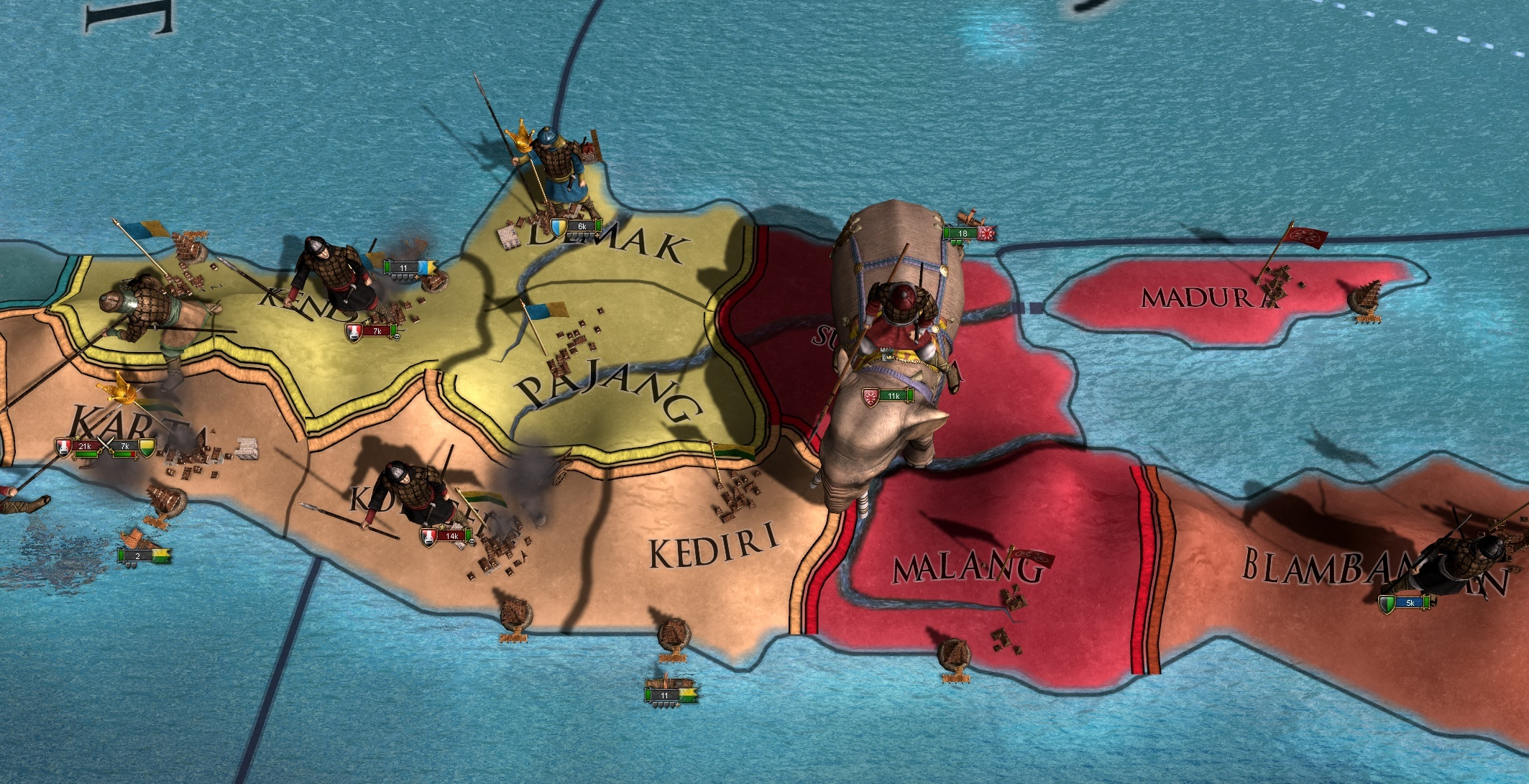 Above is a worst case scenario. Successor states of Demak and Mataram vie for dominance of Java while the remnants of the Majapahit court helplessly watch their nation collapse. Muslim successor states spawn by event if a significant number of your provinces convert to Islam and you cannot maintain high Legitimacy.

But all is not yet lost! Through their new mission tree, Majapahit have the means to end the Disaster and restore the golden age of their empire:

The Majapahit mission tree is a little different to the traditional mission tree structure. It begins with 4 missions that guide you through the Disaster and alleviate its effects - putting an end to the succession crises, stabilizing the spread of Islam, disabling events that increase subject liberty desire, and preventing breakaway states from emerging. Completing the Prevent Collapse mission finally puts an end to the Disaster, and adds a permanent +1 diplomatic relation slot.

This mission tree does not award permanent claims (with one notable exception) or even Subjugation CB’s against specific countries. Instead, the Enforce Loyalty mission unlocks the unique Majapahit Campaigns CB, which functions similarly to the Subjugation CB but has no time limit, a warscore cost discount of only 25% (compared to Subjugation’s 50% discount), and can be used against any nation in the Malay culture group that you’ve discovered. This eliminates the need to award CB’s or claims preceding missions like Rein in Malacca or Subjugate Makassar. This CB is improved when you complete Gajah Mada’s Oath, which requires you to form Malaya, by unlocking use of the CB against all nations in the Chinese culture group. Completing the Subjugate the Mainland mission improves it for the final time, allowing the CB to be used without restrictions.


Code:
And that’s all for today. Next week we’ll return our focus to Mainland South-East Asia and take a look at another crumbling empire: Khmer.

As a reminder, @neondt is a content designer, not a programmer, therefore cannot reply on the programming side of the patch.

This looks like an interesting campaign, forced into the deep end like few countries are.
Reactions:
M

neondt said:
This mission tree does not award permanent claims (with one notable exception) or even Subjugation CB’s against specific countries. Instead, the Enforce Loyalty mission unlocks the unique Majapahit Campaigns CB, which functions similarly to the Subjugation CB but has no time limit, a warscore cost discount of only 25% (compared to Subjugation’s 50% discount), and can be used against any nation in the Malay culture group that you’ve discovered. This eliminates the need to award CB’s or claims preceding missions like Rein in Malacca or Subjugate Makassar. This CB is improved when you complete Gajah Mada’s Oath, which requires you to form Malaya, by unlocking use of the CB against all nations in the Chinese culture group. Completing the Subjugate the Mainland mission improves it for the final time, allowing the CB to be used without restrictions.

I really like the fact that you are adding such unique mission rewards. There are plenty of other unique things that could be granted, like unique diplomatic interactions, opening up event chains, specialized government reforms, or maybe even crazier things, like alternative ways to complete certain age objectives or unlocking nation-unique policies.

Hopefully the variety with mission rewards will only keep increasing.
Expand signature
Sit now there, and look out upon the lands where evil and despair shall come to those whom thou allied. Thou hast dared to mock me, and to question the power of France, master of the fates of Europe. Therefore with my explorers thou shalt see, and with my spies thou shalt hear; and never shall thou be released from vassalage until all is fulfilled unto its bitter end.

neondt said:
Completing the Enforce Loyalty mission converts all of your current Tributaries into Vassals.
Click to expand...

Edit: just found a enforce loyalty mission on the middle of the mission tree


neondt said:
The Porch of Mecca mission requires controlling the Aceh area and spreading your religion through the region. As a reward, you unlock the Propagate Religion trade policy and your Hindu provinces become immune to its effects.
Click to expand...

Is there an opportunity(mission or event) to convert your country's religion to Islam like Kongo or Andalusia? Or do we have to do it in an old fashioned way aka via rebels?
Reactions:

Neondt, is there possibility that with this expansion you could add a small event considering Ieyasu Tokugawa ?
Right now it is odd that we are stuck with the Matsudaira dynasty for the whole game
Reactions:

do you keep this tree when forming malay or does malay have a different one
Reactions:

I'll relinquish one bullet. Where do you want it?

wow! That really looks unique. I really would love, that the nations near by get a notification event when the disaster starts and another when the disaster ends (2 different for any outcome) - its the same what I wish for the ayuttaja disaster - this simple mechanic adds a lot of flavor - not only for the nation that you programmed the disaster but also for the other nations around in a simple way.

I always loved the events when I got the informations about important things or different outcomes that happend in nations near by. is this a thing? @neondt

What also would be cool if the tributaries of majapit get an event at the begining of the disaster where they have to chose if they stay a tributary or leave the realm. (at least they should get an information event about the disaster in majapit)

keep up the great work!
Reactions:

neondt said:
The Porch of Mecca mission requires controlling the Aceh area and spreading your religion through the region. As a reward, you unlock the Propagate Religion trade policy and your Hindu provinces become immune to its effects.
Click to expand...

Does that mean you can use propagate religion as a non Muslim nation/keep it if you switch religion or does it change the requirement to have 50%+ trade power in the node?
Reactions:

I wonder if releasing those tags may be an alternate way to approach this disaster. I mean, it seems somewhat logical to abandon the problematic stuff and consolidate yourself, to then take back what belonged to you.
Expand signature
Better tall play with a simple solution: new modifier suggestion
Reactions:

and also: WoW! the missions you made are looking really unique! Almost a shame that you can just play them for this only nations. The propagate religion - amazing! The new hindu budda - great! Thats really unique - Iam glad that you finally have time to make South east Asia - and its very promissing until now.
Do the sucessor states and the tributaries have also acess to some of the missions? Propably not?
But I really like that there are some more missions on the right for the little nations, thats really needed.

While estates were changed latley - are there any new estates in this region planed? Or even more flavorfull - different/more estates missions/agendas for this region?

Keep up - really love to read this stuff
Reactions:

When the patch is out. Nobody does Dev Diaries on bugfixes.


Ninaran said:
More mission trees. Exactly what we need. Who cares that the game mechanics are burning, right?
Click to expand...

From what I understand, neondt is a Content Designer, not the Game Designer or someone who programs/fixes major mechanics.
And I do believe that he is doing these Diaries in his own time, as most Paradox Developers are returning from vacation in August. Other types of Developer Diaries won't resume before then.
Expand signature
Nationality: Croat
Age: 29
Religion: Roman Catholicism
Ideology: Rightist
Last Megacampaign: CK2 -> EU4 -> Vic2 - Crusader Panonians
Last EU4 playthroughs: France, Commonwealth
Reactions:

This all looks great and I am definitely going to give Majahapit a try when the update drops. Looks right up my alley.

I know that you said that Burma is a little bit outside of the scope of the update, but would it be possible to have an event or two added to do with Bayinnaung? The succession crisis after the death of King Tabinshwehti seems perfect for either a disaster or just an event where you choose between a few options for his possible replacement, maybe triggered by you having no heir for an extended period?
Expand signature
Join the Nethermancer order today and get your own free midget minion
Reactions:

neondt said:
Completing the Enforce Loyalty mission converts all of your current Tributaries into Vassals.
Click to expand...

Horn and Ivory said:
How will this whole set of things work for people who don't have Mandate of Heaven?
Click to expand...

They'll just be independent nations, no connection with Majapahit, like tributaries of Ming without Mandate of Heaven maybe
Last edited: Jul 28, 2020
Reactions:

Looks very interesting. My only concern would be that if you form Malaya and need to keep Majahapit's mission tree, you don't get access to new mission tree. Is this a choice by design?