Hello and welcome to another EU4 development diary. There has been a fair amount of bugfixing going on for 1.17, and our current estimated release week is the second week of May, if the gods smile upon us.

One of the many balance things we have done for 1.17 is further tweaks to the covert actions. First of all, instead of having all of the cool unlocks tied to the Espionage idea group, making it a too binary choice, we have moved the unlocks from ideas to tech. 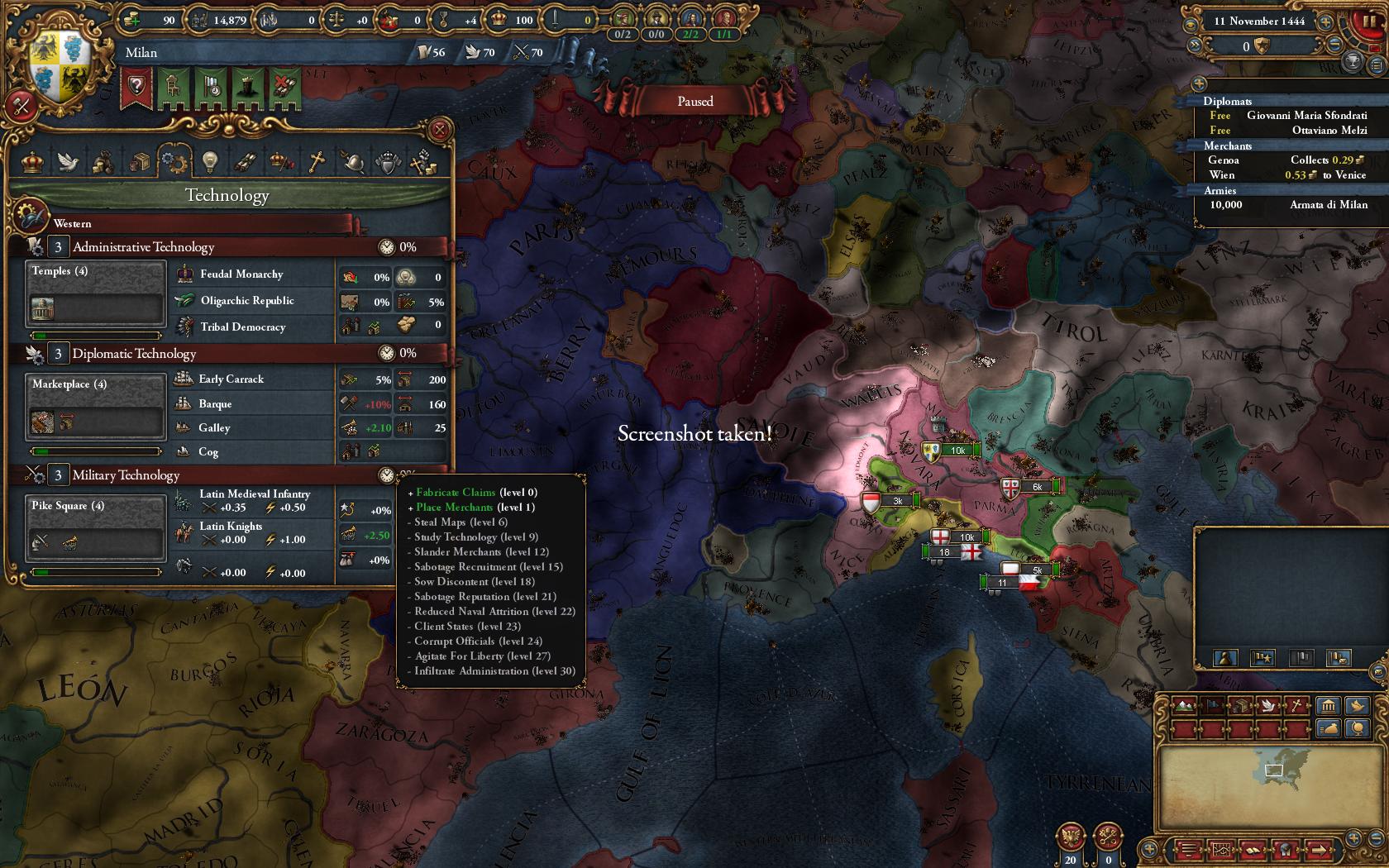 As you can see from this screen, you gain espionage abilities at about every 3rd level, with Agitate for Liberty being late, and stealing maps early in the game.

We have completely changed the Espionage Ideas, removing the unlocks and adding some new more interesting abilities, to create an ideagroup focused on internal strength.
Ambition: +50% Rebel Support Efficiency.

For modders, there’s a new modifier called 'reduced_liberty_desire' which reduces the liberty desire of all your subjects. We primarily use it in the espionage ideas for now, but will probably be applied at more places later on.

We moved the claim fabrication idea from Influence to Espionage. And what did Influence get, well.. They get an idea which increases prestige and heir chance, because monarchies are cool..

Another things we did with spies, was reducing the spy discovered cooldown to 3 months, instead of 5 years.

While the code now supports to put Fabricate Claims behind a tech, it is still going to be allowed from the start of the game, as we have assigned it to tech 0. If a modder wants to put it later in their mod, its very trivial.

There have been some changes to how Claim Fabrication works. First of all, the cost of fabricating a claim is now 30 off your spy network, before other modifiers. If you already have claims on a nation, you cost increases by 10% per claim you have on that nation.

With the threshold of discovery being above 25 in Spy Network, there are now risks with building up a spy network to fabricate claims, unless you have invested into Espionage Ideas, which reduce the cost.

Claims are there to save you from major stability hits when you declare war, and to make it possible to fight wars inside the HRE without the emperor stomping down on you. There is no longer a small reduction in AE when using claim war goals, but it will still be cheaper to take it in dip power.

If you are not eager to directly gain territory yourself, we are working on adding a casus belli which is valid against all your rivals at all time, where you humiliate them, or force them to release nations or return cores.


Oh yeah… The impact from Religious Unity on corruption have dropped from 0.5 to 0.1.
Expand signature
Johan Andersson
Studio Manager Paradox Tinto - Follow me at Twitter!

thats a game thats been purged from my memory.. i only remember a fun design meeting for it..
Expand signature
Johan Andersson
Studio Manager Paradox Tinto - Follow me at Twitter!

Purged? Wow. Ok. It was a while ago. I was thinking while playing Vic rev that it would be nice to bring the resource mechanic from Vic rev to eu4 (not the pop system)...so units would cost ducats and raw materials.

A dlc with the first industrial revolution (ca. 1760s) would be great!
Reactions:

Cheers for the DD Johan All the changes sound very good from my angle. Espionage looks like a better "empire building"/holding an empire together group now, nice work. Changes to fabricate claim sound good as well. Now that it'll be more difficult to 'carpet claim' half of Europe, any thoughts as to making claims a bit more beneficial in coring costs? Note - I don't know if that's a good idea, it just popped into my head.
Expand signature
The object of naval warfare is the control of communications, and not, as in land warfare, the conquest of territory
- Sir Julian Corbett
Modding minutae thread
Reactions:
F

The fabricate claims changes make me think Deus Vult is now even more powerful than before. Everything else sounds pretty fine to me, but did fabricate claim really need a nerf like that when it was already a fairly weak CB really only useful if you had no other way to get a CB?
Reactions:

Will the rival cb have increased cost for taking land?
Reactions:
F

Freudia said:
The fabricate claims changes make me think Deus Vult is now even more powerful than before. Everything else sounds pretty fine to me, but did fabricate claim really need a nerf like that when it was already a fairly weak CB really only useful if you had no other way to get a CB?
Click to expand...

They have been getting nerfed since the addition of permanent claims imo.(25% to 10% reduction in coring cost)

of course now you only pay 50% of the core cost(even tho you get the 75% floor with autonomy) of the cost instead of the 100% back in the day.(well normally without modifiers)

feels like they want it to be a last resort cb. i do agree it makes Deus vult stronger.(wonder if that will be nerfed)
Last edited: Apr 28, 2016
Reactions:

Why isn't there something like this in Influence ideas? It would seem much more fitting. Also any chance of looking at policies and buffing them? Some of them are so useless *cough*defensive*cough*. Maritime-Economic +10% National Sailor Manpower. Really? The only time I could imagine clicking this would be on accident or for the Sailor Mon achievement.
Reactions:

A CB to dismantle my enemies without crippling my diplo tech for years from release nation POs would be the best.
Reactions:

Johan said:
There is no longer a small reduction in AE when using claim war goals, but it will still be cheaper to take it in dip power.
Click to expand...

30 of spy network cost is so much... makes WC slower and harder again.
Reactions:

It would be a great idea to have the spy actions be unlocked through diplo tech rather than military tech, as diplo is pretty useless right now and it's clear you guys want players to take it (referring to corruption here) and adding incentives for diplo would make people take it with far more positive feedback than forced techniques like corruption.
EDIT:Now that I look at the screenshot again I can't tell if it's unlocked by diplo or mil. If it's diplo then sorry for wasting space in the thread.

I REALLY fail to see how being locked out of declaring war for up to 15 years for no apparent reason is cool.
Expand signature
I was just bribed to stop being corrupt. Gotta love EU4 logic.
"If we are victorious in one more battle with the Romans, we shall be utterly ruined".
-Phyrrus of epirus
Just replace romans with french or prussians and you get EU4 in one sentance
Reactions:
L

Oh great. Another nerf to expansion and a major weakening of influence ideas.

I mean, who really cares about heir chance and prestige? Prestige is easy to keep very high once you win a few wars. And heirs... I've never had my monarch die without an heir. I know it happens, but not frequently enough to waste monarch points on it.
Last edited: Apr 28, 2016
Reactions:

A suggestion for the claim fabrication as 30 spy network is ALOT. Maybe add a multiplicative value that increases by the number of claims you have. The base would the normal 10 spy network but as you have more claims on your opponent it would increase by lets say 5 or 10 with the max claim cost being something between 30-40. This would allow for a smaller nation to quickly get a claim on an opponent when their neighbour is getting wrecked but prevents big countries from claiming half of Europe in a decade.

Edit: Also just get rid of the other stuff for claim fabrication. Just there to piss people off even more when the corruption starts ticking up and you realise Europe is in a coalition against you, poor tiny Friesland.
Last edited: May 8, 2016
Expand signature
The supreme art of war is to subdue the enemy without fighting.
-Sun Tzu

I like talking about deporting people that are here illegally
-Donald Trump
Reactions:

Looks good. Cool that there will be CB against rivals. It is so fun, when i can set a rival, but cant really start war against someone.
Nerfs to Corruption are the only one i can support.
Reactions:
L

I finally upped to 1.16 and while I don't like most of the new mechanics, the one thing I liked was the speed of claims. Especially when you only have two diplomats in the beginning. Now that has been nerfed to about 20 months for a claim?! Ridiculous
Reactions:

Johan said:
because monarchies are cool.
Click to expand...

I literally burst in laughter so hard that it scared off my two cats and a dog. Nice one.
Expand signature
I am a proud bearer of The Fourth Cookie for Services to Syndicalism ● and The Grand Service to the Kaiserreich Mod Cookie *
You're new to this negotiating thing, aren't you? It's simple. You beg for mercy and offer me gold, and I say no and take everything you ever loved. And the gold.​
Reactions:
L

evilcat said:
Looks good. Cool that there will be CB against rivals. It is so fun, when i can set a rival, but cant really start war against someone.
Nerfs to Corruption are the only one i can support.
Click to expand...

Problem with the rival CB is it sounds like you can't take provinces but will be able to weaken your rivals severely by releasing their nations. But once coalitions start, they will usually be a part of one anyways and that CB will die.
Reactions:

Johan said:
Another things we did with spies, was reducing the spy discovered cooldown to 3 months, instead of 5 years.
Click to expand...

This sounds like too short of a cooldown period, especially in multiplayer. Unless you meant to say 3 years, not 3 months.
Expand signature
In the 3 years and 6 months that Finland fought Soviet Russia in WW2, she caused the latter 1.5M-2M men, 3k-3.5k aircraft and 3k-3.5k tanks in casualties. Few countries achieved greater destruction of their enemies' military assets; all of them great powers with vastly more resources at their disposal.