Hello! We have a lot to get through today as I’ll be unveiling the majority of the new content coming in the free 1.27 ‘Poland’ update. Let’s get to it:

As the name implies, much of the new content in the Poland update is focused on Poland itself. 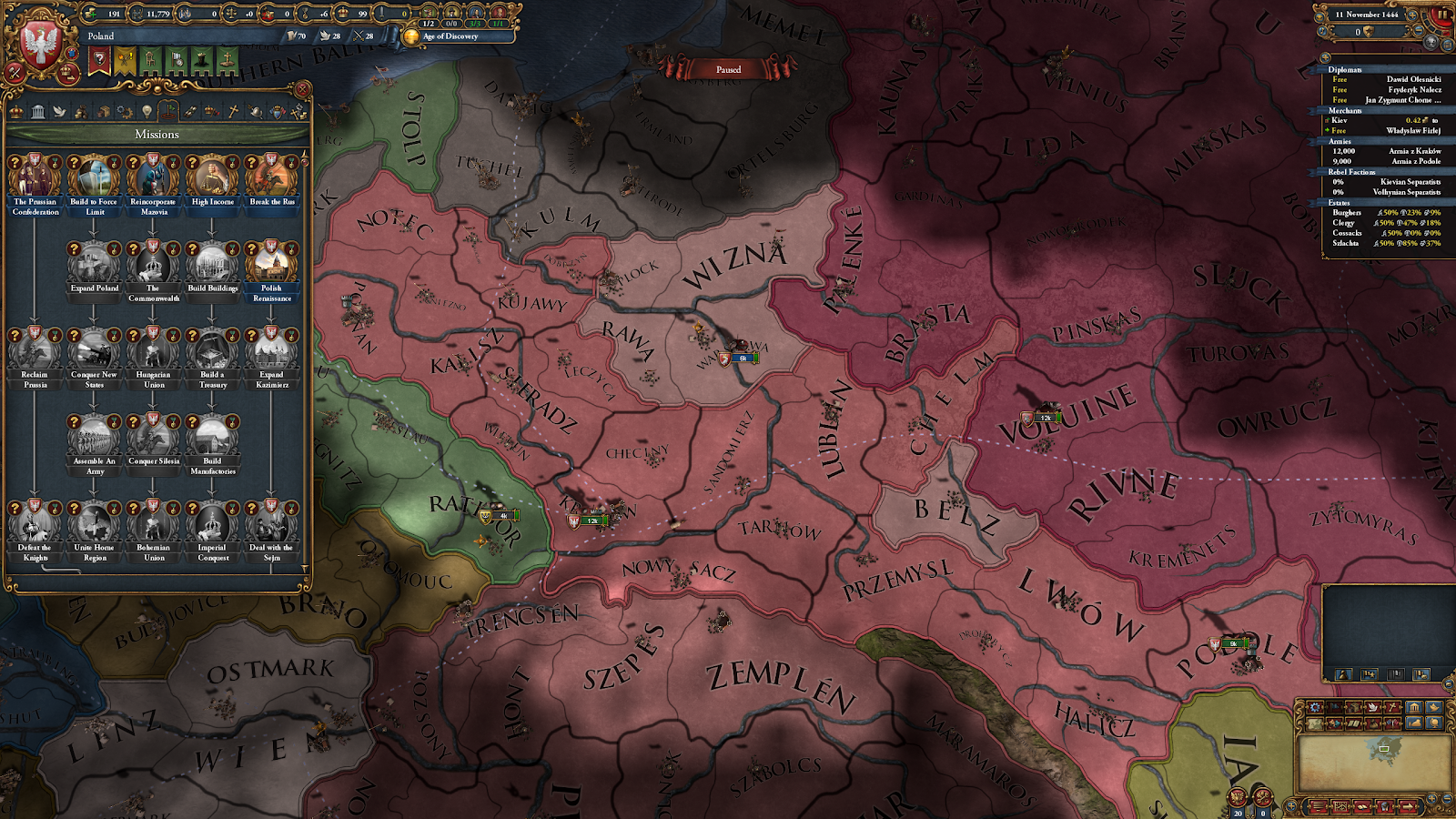 We’ve given the map a facelift to reflect not only the 1444 Polish-Lithuanian-Mazovian borders but also the later partitions. Here we can see several additional provinces including Chelm rudely protruding into Lithuania.

The Polish mission tree has also been expanded. This tree will help you on your way to restoring the Jagiellonian empire through personal unions, as well as avenging the defeat at Varna and of course investing in Eastern Poland. The mission tree expands when you form the Commonwealth.

A new event chain - The Prussian Confederation - puts the Teutonic Order in a precarious position in 1444. If the Teutons are unable to deal with its unruly citizens quickly, Poland may take the opportunity to march in to restore order. 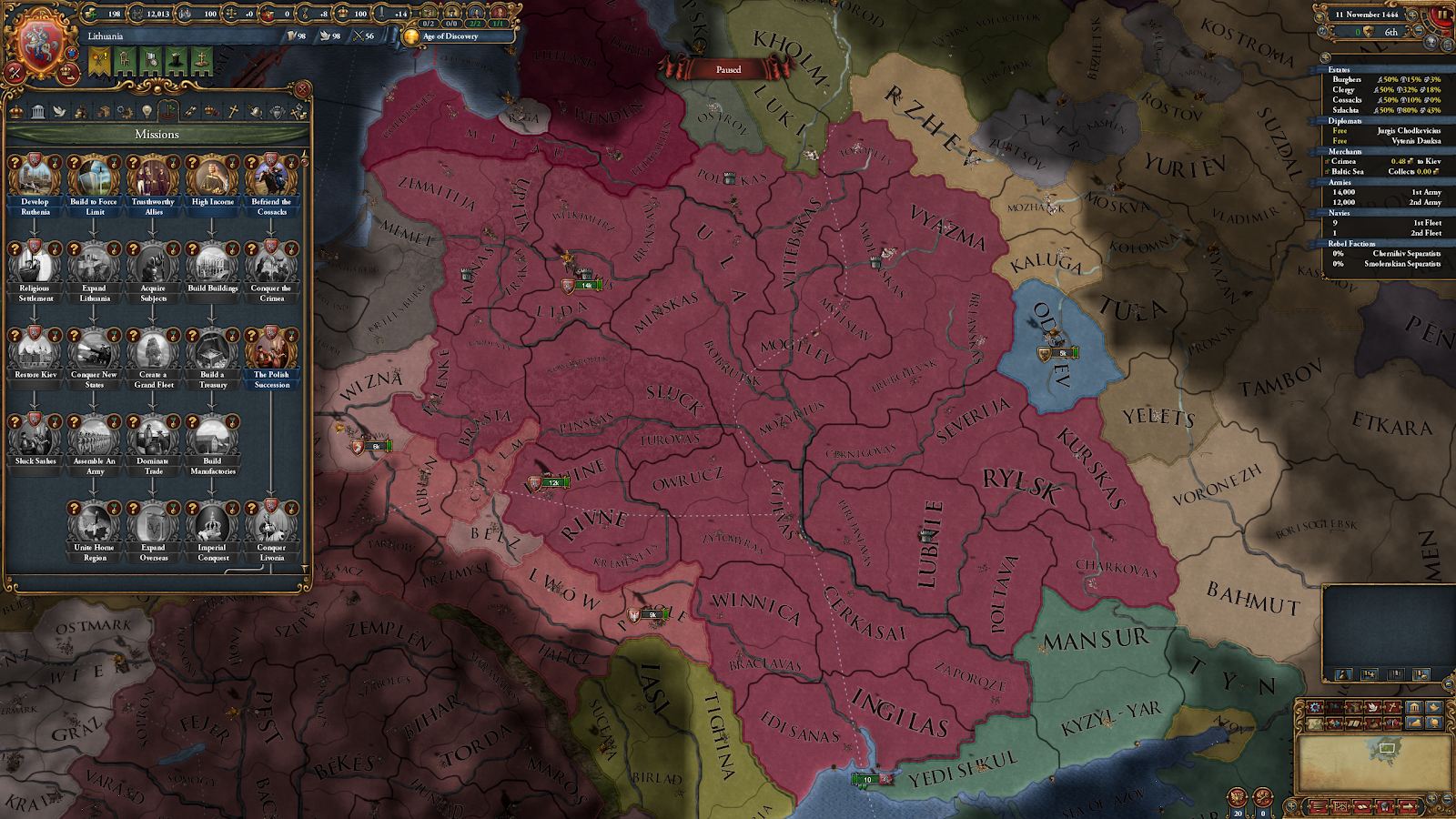 Here we see the new province layout for Lithuania. Its previously oversized provinces have been split up into smaller chunks, and a fort in Lubnie makes Ruthenia more defensible against Russian aggression.

Lithuania's newly expanded mission tree focuses on the development of Ruthenia, and can also lead to a union over Poland and Muscovy.

We’ve added some new national ideas to minor nations in this region, displayed below: 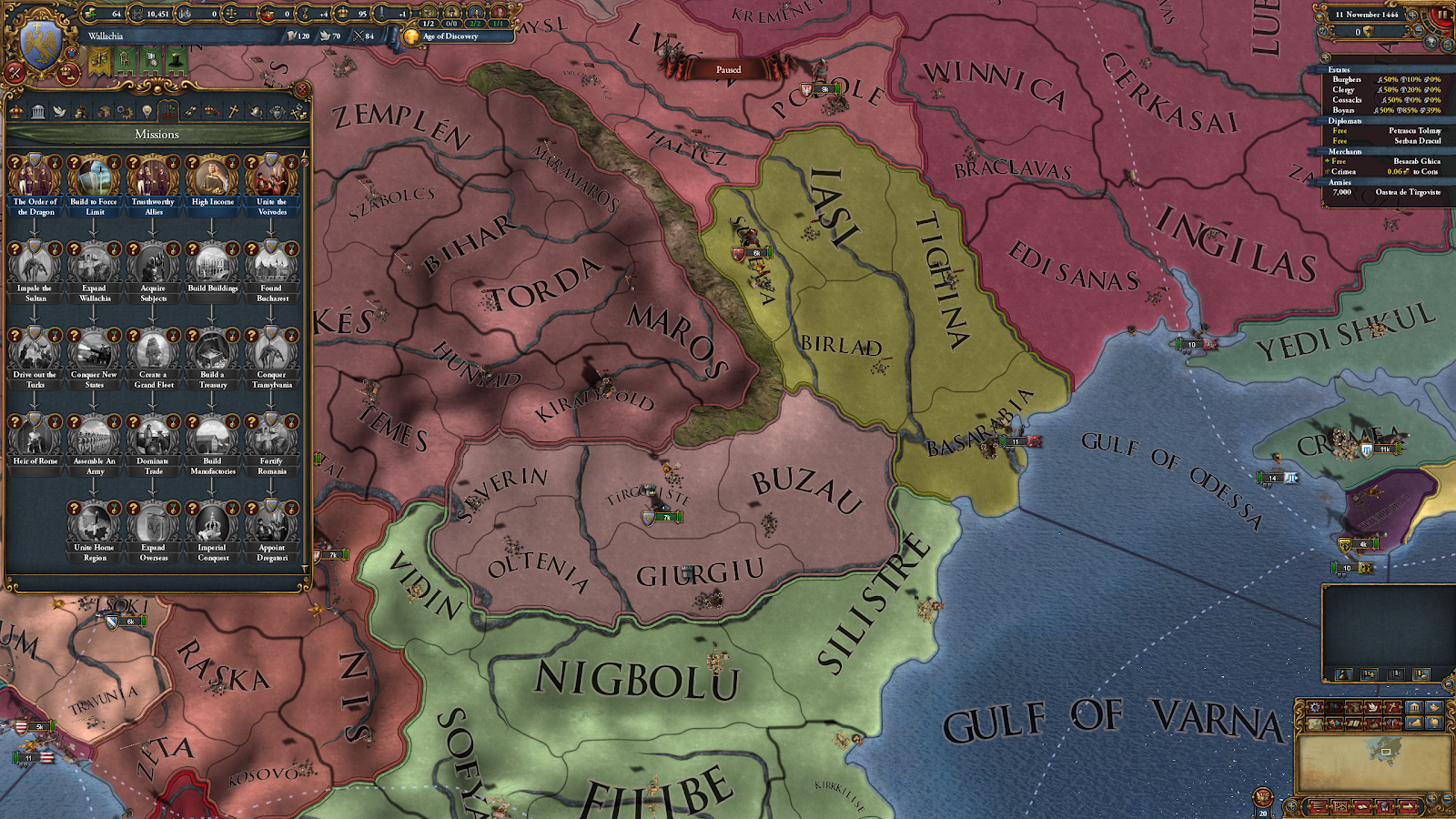 The Romanian nations, Wallachia and Moldavia, have each seen their starting province count increase from 3 to 5.

The new Romanian mission tree guides the player toward building a coalition against the Ottomans and driving them from the Balkans; they can even impale the Sultan himself.

Speaking of impalement, Vlad the Impaler is very likely to show up after his father’s death to sow violence and mayhem against any who dare oppose him.

We haven’t forgotten to add some flavour to Moldavia either; Moldavia is now an independent nation guaranteed by Poland. Early in the game an event chain will have Prince Roman, exiled in Poland, attempting to seize the throne. This will decide Moldavia’s fate as a march under Poland or Hungary or as an independent nation. 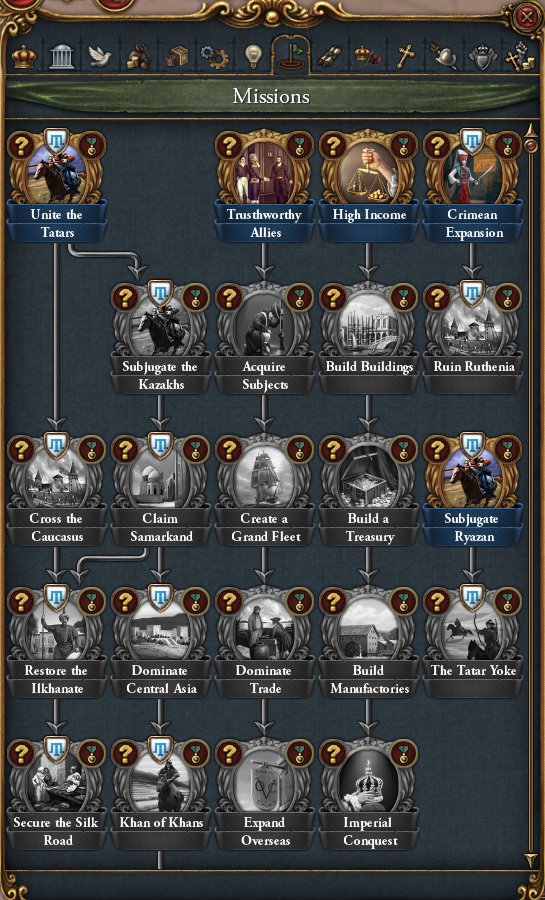 The Tatar hordes have had their mission tree greatly expanded. No longer limited to the conquests of Russia and Ruthenia, the Tatar missions will lead the player through the bloody conquest of the former Mongol Empire. 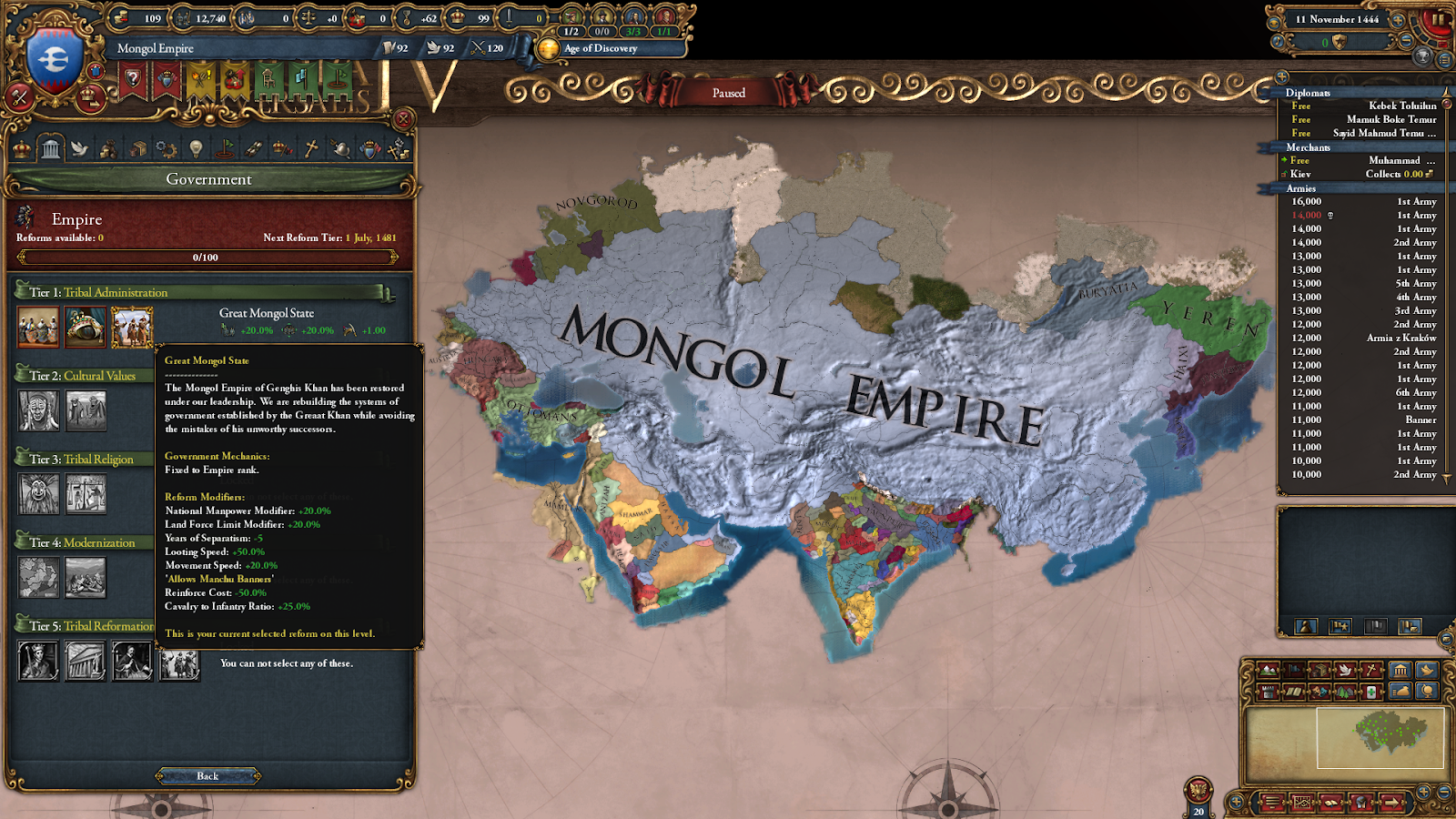 The Mongol Empire is a new formable tag with some very steep requirements. You’ll have to conquer the majority of Genghis Khan’s empire, having first formed Yuan, the Golden Horde, or the Ilkhanate. Should you succeed in this herculean task, you’ll be rewarded with the new Great Mongol State government reform (or government type for non-Dharma owners). The Great Mongol State functions very much like a steppe horde without many of the drawbacks, but its greatest advantage is the ability to recruit Banner units from primary culture provinces in the style of the Manchus.*

* Availability of Banner units is dependent on owning Mandate of Heaven; this feature will otherwise be replaced with a discipline bonus. 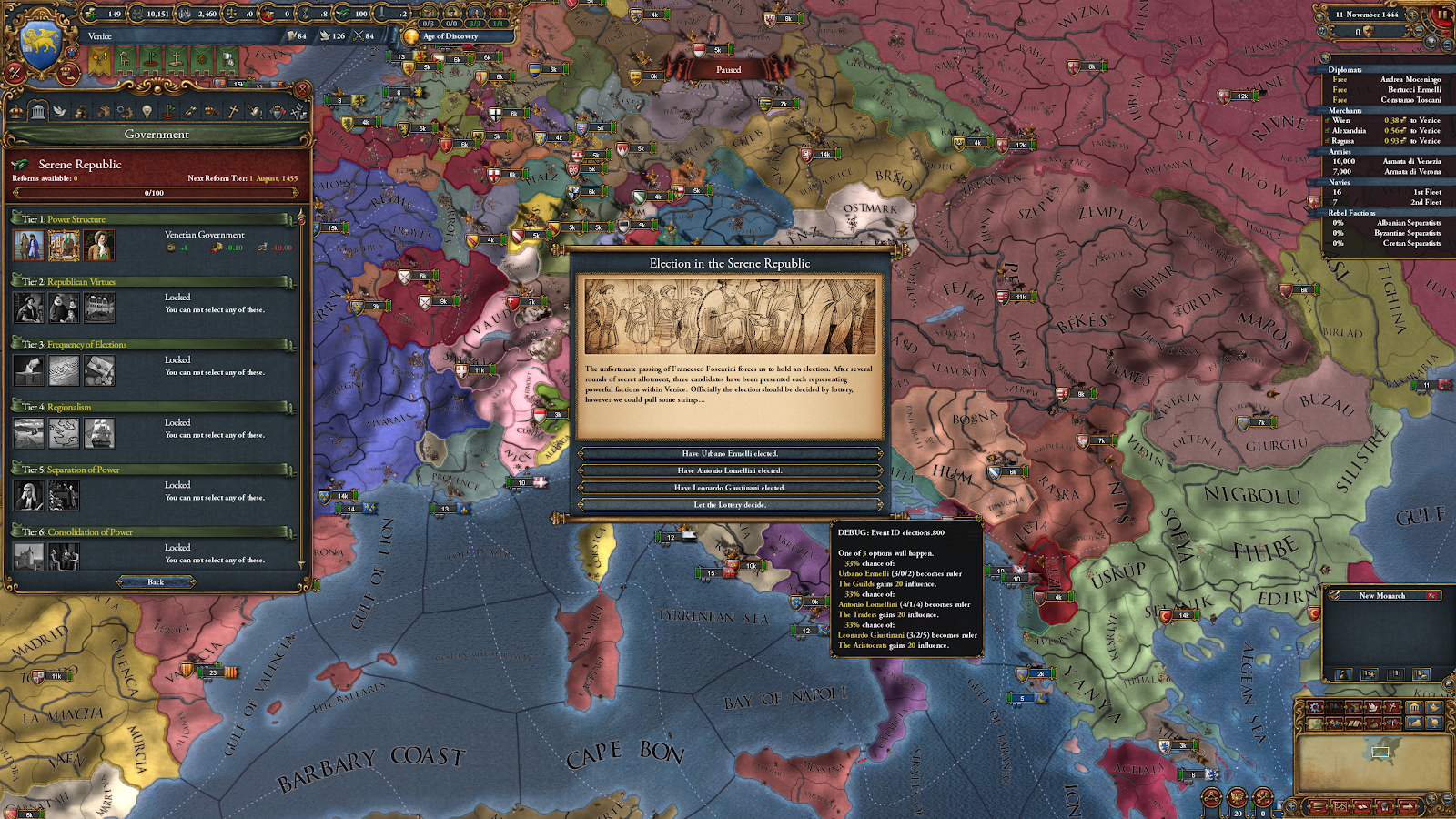 Finally, a new batch of government reforms will shortly be available to Dharma owners.

Venetian Government (also available as a government type to non-Dharma owners) is a special variety of Merchant Republic with a new kind of election: Lottery. In governments with Lottery election, corruption is reduced, rulers rule for life, are generated to be much older, and have weighted random stats. Elections occur only when the ruler dies. In an election, you are presented with 3 candidates each of which would cost Republican Tradition to elect directly. Alternatively, you can let the Lottery decide and one of the three candidates will be chosen at random for no republican Tradition cost.

For those of you not playing as Venice, the new Sortition government reform will enable Lottery elections for any Republican nation.

At a disturbingly late point during development, we realized that we already had a government reform named Sortition and realized we needed to replace it. We came up with 2 new reforms in the 9th tier for Republican governments:

Last but not least, we’ve added 2 new government reforms for Indian nations, available for all nations with the Marathas and Rajputs estates respectively:

Permanent Marathas Council gives +5% discipline, and changes the Recruit Advisor interaction to instead spawn a general with +1 shock. Enacting this reforms will make the Marathas more loyal and influential, while having the opposite effect on the Nobles.

Governmental Purbias Register gives +5% morale recovery speed, and changes the Enlist Purbias interaction to give both fire damage and extra discipline to your Rajput regiments. Enacting this reforms will make the Rajputs more loyal and influential, while having the opposite effect on the Nobles. Rajput regiments themselves have been rebalanced to now have -25% Army Drill Decay, -50% Reinforce Cost, and 5% Morale as a base.


That’s all for today! Next week @DDRJake will be revealing the full 1.27 changelog. In the meantime, I’ll be available in this thread to answer questions on the upcoming content.
Last edited: Sep 18, 2018
Expand signature
EU4 Content Designer

Poland CAN into EU4!
Expand signature
She blinded me with Science!

Has Poland missions on Moscow or Sweden ?
A

It's amazing! Can't wait to play it.
However Balkans, especially Bulgaria, aren't in a good shape.

MateuszNH said:
Has Poland missions on Moscow or Sweden ?
Click to expand...

Attack is the best Defence

Huzzar! My second favourite country in-game and real life is getting a facelift. First it was Britain and now Poland, thank you Paradox.
Expand signature
An eye for an eye leaves the world blind, except for a guy with a really cool eyepatch.
M

diablopl4 said:
"Hungarian Union" I bet Habsubrgs are not going to be happy about that
Click to expand...

Well it's Historical, the Polish and Hungarian throne shared King before Poland and Lithuania. That king died right before the start date.
Expand signature
That'd be Groogy. He's kinda like the King Joffrey of these forums, toying with us for his own sick amusement. - DominusNovus
The Groogy is an elusive and magical creature. You do not find the Groogy, the Groogy finds you. - Enlil
I thought he was just created in a lab - Viking

If you like Hedgehog pictures and EU4 stuff check my twitter @sirvogelius
I also stream occasionally on Twitch and talk about games.
S

Will there be any changes to the event chain to abolish the elective monarchy? I personally always felt it came rather late.
Expand signature
Tryharding games like Europa Universalis 4 in a casual manner.

looks very cool, but are there any changes to elective monarchy?
R

Very laser focused, but looks neat. Slightly sad the Balkans proper are left alone, but there's always next time.
B

But please don't add new achievements for Poland that you cannot get if you form it as another nation. It would make that Silesia-campaign so much sweeter...
Expand signature
I tend to overclarify and/or create walls of text trying to explain my point without being able to do so adequately.
If you are a victim of that tendency, please forgive me.

Nice, can i ask if you included Zastaw Spisky event or some other interaction with Hungry, i mean maybe some event or upgrade of first Hungarian mission about poland (It's about deal in 1412 when Poland got 13 cities(including one bigger) in Spis in pledge for a 7,5 tons of pure silver as loan. These cities remained under polish control until 1769 and were source of wealth for a lot of Magnate Families like Lubomirski or Zawisza Czarny (the Black) ) 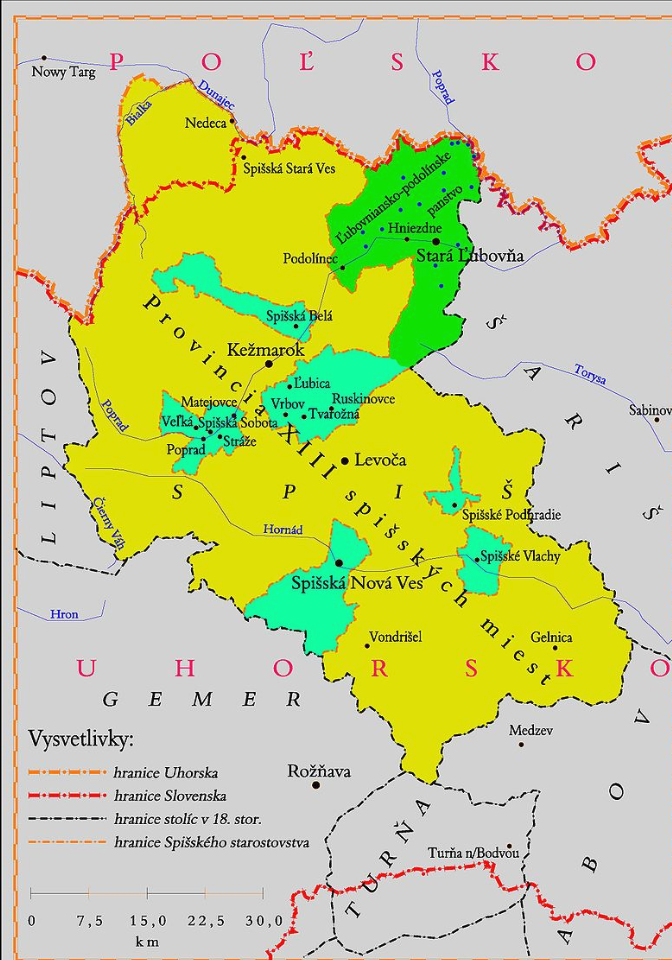 Not that it really affects balance (you will see cossacks' states once in a blue moon even in SP), but ideas for cossacks might have been a bit more militarized =)

Also THANK YOU for new provinces in Commonwealth! I've been waiting for them for 3 years
Now my watch is almost over (Steppe hordes still lack provinces) and I can take a nap
Expand signature
Ukrainian Lands at the 16-18th Centuries Maps
[EU4] Multiplayer Rebalance Mod (MPR by ZP) [SteamWorkshop] - a mod designed for MP fans by an MP fan

This dev diary is looking awesome. I just really want to know if the Livonian Order are getting new ideas, too. Considering Riga, it would not be unreasonable.
V

Changelog next week means the patch is out next week as well !

Will saved be compatible ?

Really meaty diary, surprised, thanks a lot. Very nice changes to map, especially to Wallachia and Moldavia, Poland was also in need of some help. Rest of stuff, missions, ideas look also great.

A small plea.. please take a bit more time to balance things better, tweak some numbers, bring back in some forgotten stuff, maybe nerf slighlty something that is overbuffed. EU4 has so many nice mechanism that are not used to its full potential. Its as important as extra content.
Expand signature
Guides
Ages - Splendor abilities guide
State edicts guide
Suggestions
State edicts - qol and balance
Show hidden low quality content
You must log in or register to reply here.
Share:
Facebook Twitter Reddit Pinterest Tumblr WhatsApp Email Link
Top Bottom