Good morning! As promised, the focus of today’s dev diary is Vietnam. 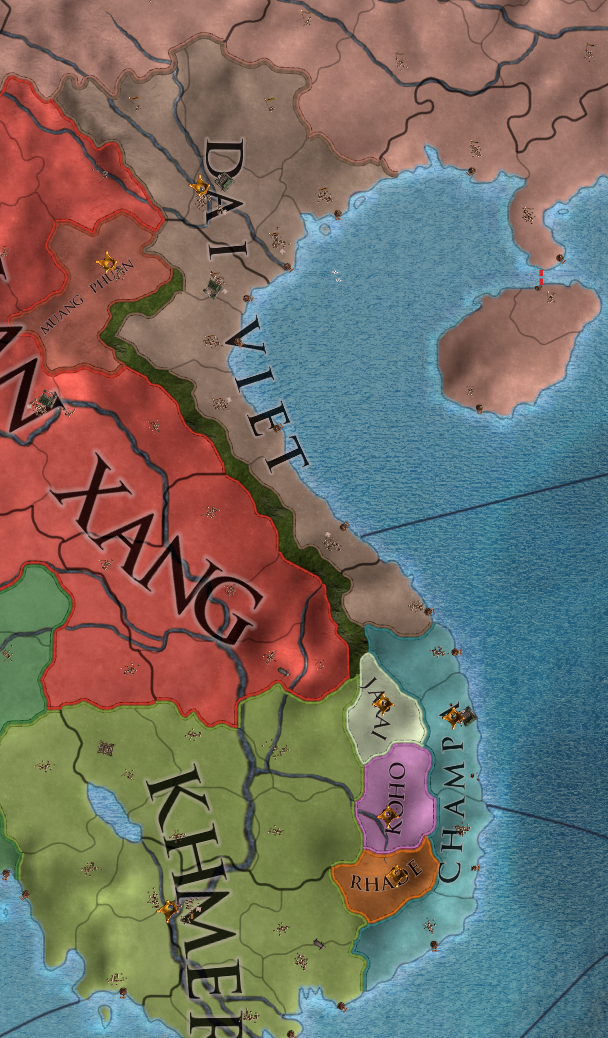 In 1444 Dai Viet is a newly independent nation, having won its sovereignty in a bloody war against the occupying Ming Chinese forces through the efforts of Vietnamese national hero Lê Loi. Early campaigns against Champa began a centuries-spanning process of Vietnamese expansion southwards. Dai Viet is now ruled by Lê Loi’s infant grandson Bang Co, though true power resides with Queen Regent Nguyen Thi Anh and Trinh Kha (a 2/3/5/1 General). For all the promise of the early Lê dynasty, the seeds of its undoing were already present; the immense power that would be hoarded by the Nguyen, Trinh, and Mac families would divide the nation multiple times throughout our period. 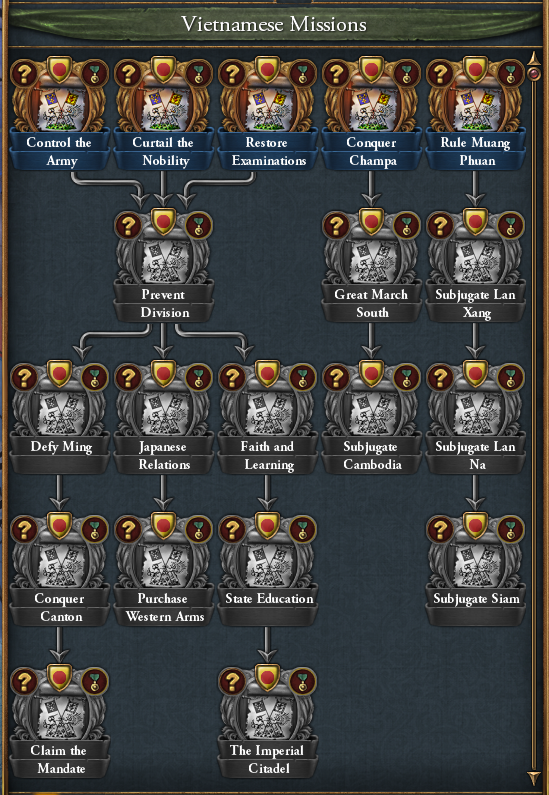 Shown above is the new Vietnamese mission tree available to Dai Viet, Annam, and Tonkin. Some highlights:


I’ve excluded the four missions in the top left part of the mission tree because they deserve a bit more elaboration and they’re tied to some additional content for Dai Viet. 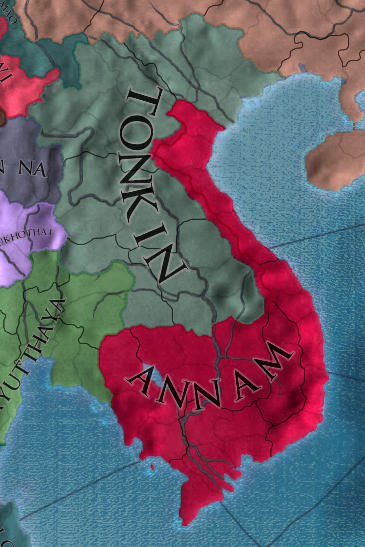 These four missions are aimed at preventing exactly the scenario seen above. The player must consolidate the power of the state and curtail the power of the powerful noble families, or else they will eventually make a major power grab and divide the country in two. A new Disaster, called the Northern and Southern Dynasties, can fire after the Age of Discovery when Dai Viet has a particularly incompetent ruler. By following the mission tree this disaster is relatively easy to avoid, but if you do decide to play through it you can choose whether to side with the northern or southern faction. Historically this happened twice at different times during the period, but in EU4 it can only happen once, with slightly different effects depending on when it happens. The northern dynasty, represented by the Tonkin tag, is ruled by the Mac dynasty if the Disaster fires during the Age of Reformation and by the Nguyen dynasty in later Ages. The southern dynasty, represented by the Annam tag, is controlled by Lê loyalists in the Age of Reformation, and afterwards by the Trinh family (descendants of Trinh Kha). Land is divided between the north and south of the country, and even includes dividing subject nations between the two contenders for the throne - so if for example Dai Viet had vassalized Ming and Khmer, Ming would go to the northern dynasty while Khmer would go to the southern dynasty. Dai Viet is now reformable by both of these breakaway nations.

So, how do you avoid all this? The four missions required to do are as follows: 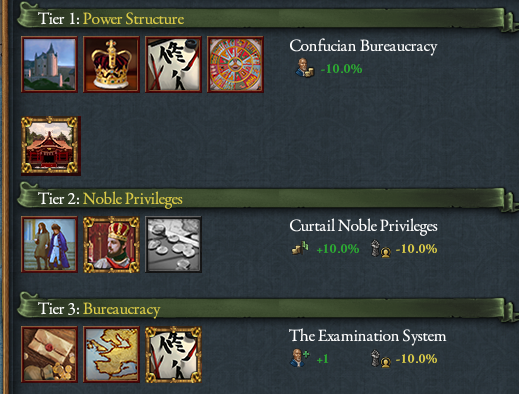 I mentioned The Examination System above, which is a new government reform that increases your Advisor Pool by 1 and reduces Nobility Influence by 10%. This reform is available to any nation that either has the Celestial Empire or Confucian Bureaucracy reform. Confucian Bureaucracy is yet another new government reform, initially granted to both Dai Viet and Korea in 1444. This reform reduces your Advisor Costs by 10% and is available to nations that have either Confucian religion or Vietnamese primary culture. Dai Viet's government had more in common with Chinese administrations than with the mandala-style governments of the rest of South-East Asia, while characterizing Korea's government as an "Autocracy" felt inadequate; the Confucian Bureaucracy reform kills two birds with one stone in this sense. 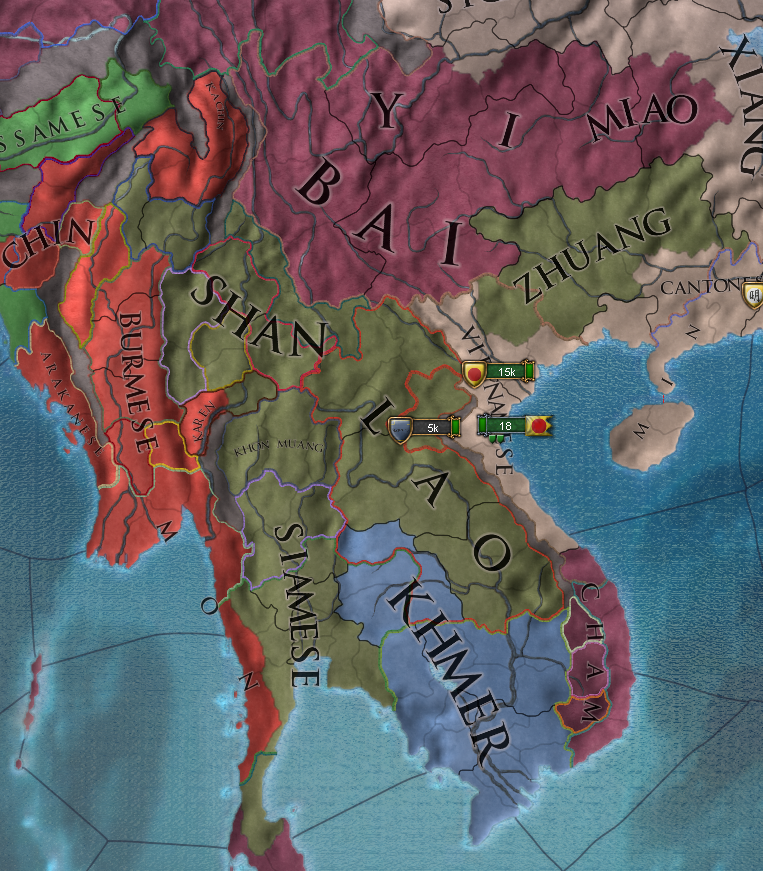 On the topic of culture, I’ve altered the culture group setup in the region since I last talked about it. The Tai group contains countries that could sensibly form the nation of Siam, and since Siam is very much a focus for the update and an “historical winner” of the period it feels appropriate for them to have a strong culture group. Northern Thai is back but renamed to Khon Muang. Khmer is left on its own, again appropriate given that this period is very much a dark age for Khmer civilization. The Vietnamese culture, on the other hand, has been “buffed” by moving it into the Chinese group. This allows Dai Viet to hold the Mandate of Heaven without penalty and eases expansion into China on the way to achieving that goal. Miao is now in the Tibetan group, which was done less because it really fits into that group and more to move it out of the Chinese group. Cham has been returned to the Malay group, which gives it access to the Malay mission tree in addition to its own unique mission branches, which you can see below. 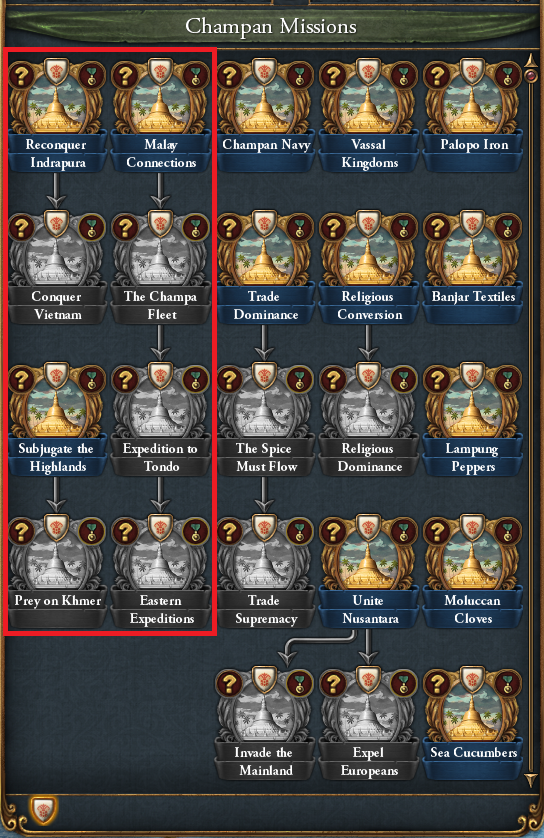 Some highlights from the Cham mission tree:

That’s all for this week! Since I’ve decided to take a short vacation this week, I may not be around to answer questions - or at least not as quickly. For the same reason next week’s dev diary may be a little shorter and focus on some of the minor nations we haven’t talked about yet like Lan Na and the Shan states.

Great!It just seems that there are some small errors. Annam should represent Nguyen dynasty, the Tokin is Trinh dynasty.Like this Map

Still zero words about the patch though xD
Expand signature
Asking PDX about a patch of the most buggy update ever, aka paid 10$ and waiting 2 months for the game to be playabe:
Your x50 upvoted post was removed.
Reactions:

Can you show us the development map for South-East Asia?
Reactions:

Vietnamese aren't Chinese, we're Southeast Asian nation with the influence of Chinese culture. If we were Chinese, Korean and Japanese would be, too. Please let us be Indochinese culture group
Reactions:

Has Karen culture something in common with future achievements??? Cuz it looks like they want to talk to the manager right now!!!
Expand signature
Is your PHOENIX purple, itchy? Try out our new ointment "OTTOMANS", the best purple PHOENIX removal for ONLY $2.99.
Reactions:

WE ARE NOT CHINESE. PLEASE FIX IT!
Reactions:

Appreciate your work on the Champa tree and content!
Expand signature
Ana Maradun is the name (Also my Steam)
—————————-
“Knowledge without action is arrogance.”
-Imam al-Shafi
Reactions:
A

This is fantastic, I've been waiting for dai viet update forever. Expecting a buff to their idea set but I guess this is fine.
Reactions:

neondt said:
the immense power that would be hoarded by the Nguyen
Click to expand...

What is this, a Bojack Horseman reference?
Expand signature
https://forum.paradoxplaza.com/forum/index.php?threads/streltsy-disasters.1104950/ - my suggestion of unique disaster for Russia and nations with primary culture of East Slavic culture group

https://forum.paradoxplaza.com/foru...sison-of-threatening-of-war-mechanic.1068550/ - my suggestion to improve of diplomacy actions from The Cossacks DLC
Reactions:
L

looks very promissing! Enjoy your vacation, you really deserved it!

Really like the new goverment reforms (and that you also did it for korea!) - but there is room for more - the general monarchy tiers still felt a bit empty/redundant after the emperor update. For example could be a goverment reform that buffs galley combat and speed in SEA against european aggressor o.s.
Last edited: Aug 18, 2020
Reactions:
A

StormyH said:
Vietnamese aren't Chinese, we're Southeast Asian nation with the influence of Chinese culture. If we were Chinese, Korean and Japanese would be, too. Please let us be Indochinese culture group
Click to expand...

The Manchu weren't Chinese either, but they were moved to the Chinese culture group for game balance reasons. And besides, wasn't Vietnamese culture very heavily influenced by Chinese culture, to the point of being considered a part of the Chinese cultural sphere, even though linguistically they have nothing to do with China and were repeatedly able to assert their independence from China?
Reactions:
R

Maybe Vietnamese ambitions for the Mandate could be better reflected with an emergent culture, like the Jurchen becoming Manchurian.

Your screenshot literally says that vietnamese are culturally similar to southern han and that they belong to the chinese cultural sphere. So being in the same culture group seems right to me.
Reactions:
A

Of course Vietnamese aren't Chinese. Vietnamese nationalism has always been powerful since the beginning. We are just inside their cultural influence, nothing more. Even Chinese is not a unifying culture, Cantonese speak a different dialect not official Mandarin, ect. Culture group is supposed to consist of cultures that are similar to each other. You can't say Austrian is German because they share the same culture group.
P.s: they tried, but there's Versailles.
Reactions:

This looks like a Balkan 2.0 discussion in the making

Jokes asides, have a good holiday!
Expand signature
Not a native-English speaker, so pardon my english

For help with your game you can always PM me!
Reactions:
U

And How about giving Harmonization buffs to Examaination reforms? Only giving +1 advisor looks weaker than other two reforms (which giving +2 accepted culture OR -0.05 autonomy change)
Reactions:

Great! I love the idea of this.

From the book that I've read, Vietnamese Confucianism was described as a harsh one like destroying Muslim mosques and Hindu temples. Is there some historical source for this or is this for gameplay?