Hello everyone and welcome to this Development Diary! For those that don’t know me, I am Trin Tragula, Content Designer of Europa Universalis, and today I will be the one writing the Tuesday Development Diary. As a Content Designer I am the one who plans and writes the events, decisions, maps, and similar things for the game. The subject of this diary will be the added content in the 1.21 “Hungary” Patch. 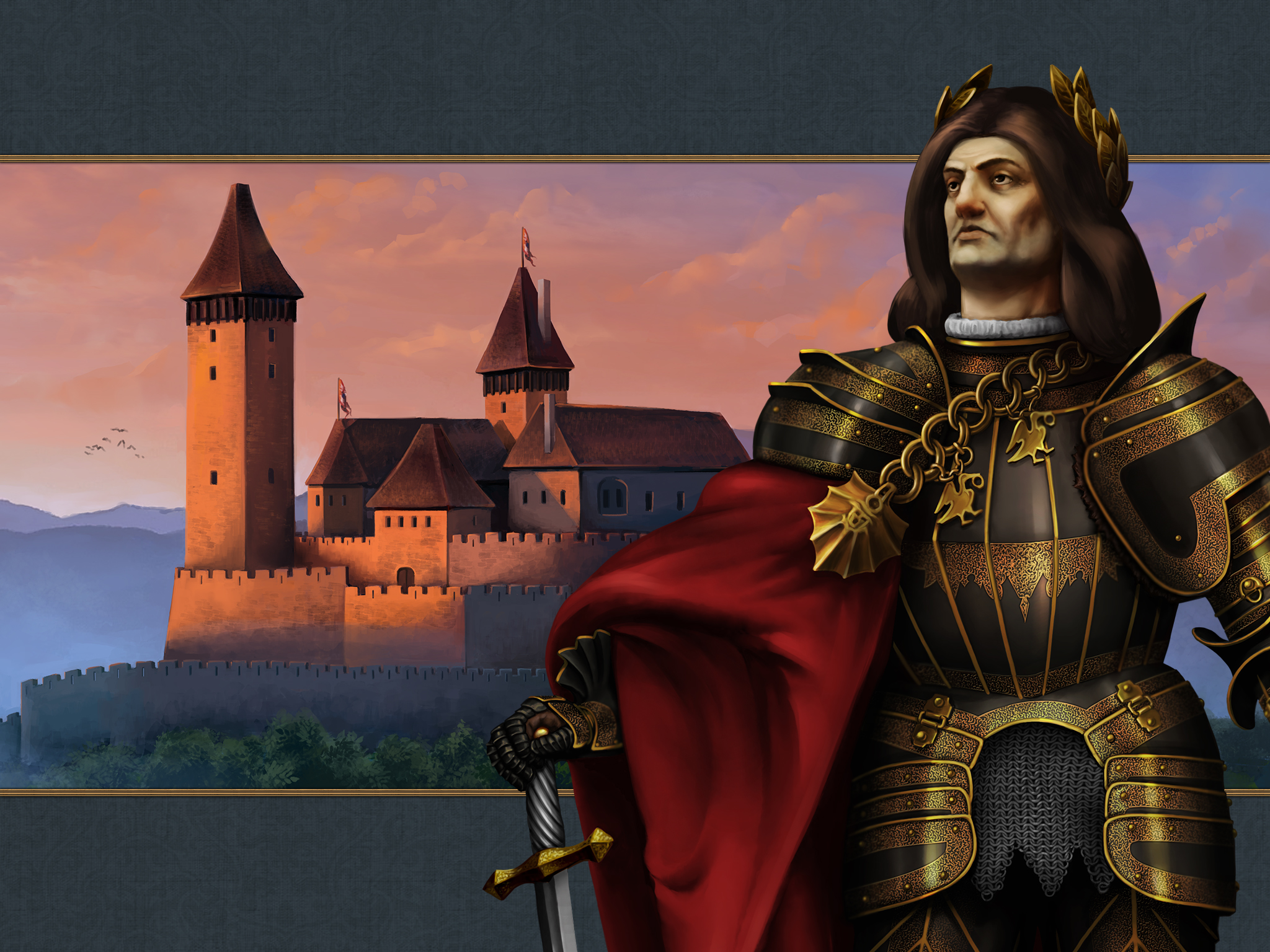 Background:​
Hungary is in many ways a vital country to the period the game depicts. It is at the center of many events that came right before our start date, and these events are also the reason we start the game on the 11th of November in 1444.

As the only remaining major kingdom between the Ottomans and the larger Christian world Hungary nonetheless thrived in the 15th century, only to be reduced to a battleground for stronger powers after the defeat at Mohacs and up to the end of the era our game covers.

As you know, in the years leading up to 1444 Hungary has just emerged from a civil war between the supporters of the posthumous son of their last king, Ladislaus von Habsburg, and the dynamic young king of Poland, Wladyslaw Jagiellon. Wladyslaw’s supporters won this conflict and it is under Jagiellon leadership that Hungary, Bohemia, Poland, Lithuania and many others invaded the Ottoman Empire in 1443. This invasion was abruptly ended at Varna on the 10th of November in 1444 with the death of Wladyslaw and many others.

When the game opens Europe is recovering from the shocking defeat at Varna. Hungary is once again without king and powerful forces are aligning for or against the boy King, Ladislaus the Posthumous.

In Hungary patch we’ve tried to better capture the quite complicated situation of 1444 in Central and Southeastern Europe (one I have just barely touched in the short lines above). In order to do this we have both added new content and reworked some the old content related to Hungary, Austria and Bohemia.

Hungary:​
Hungary has been the main focus of this patch and has received about 20 new events as well as a rework of a number of their old existing events. 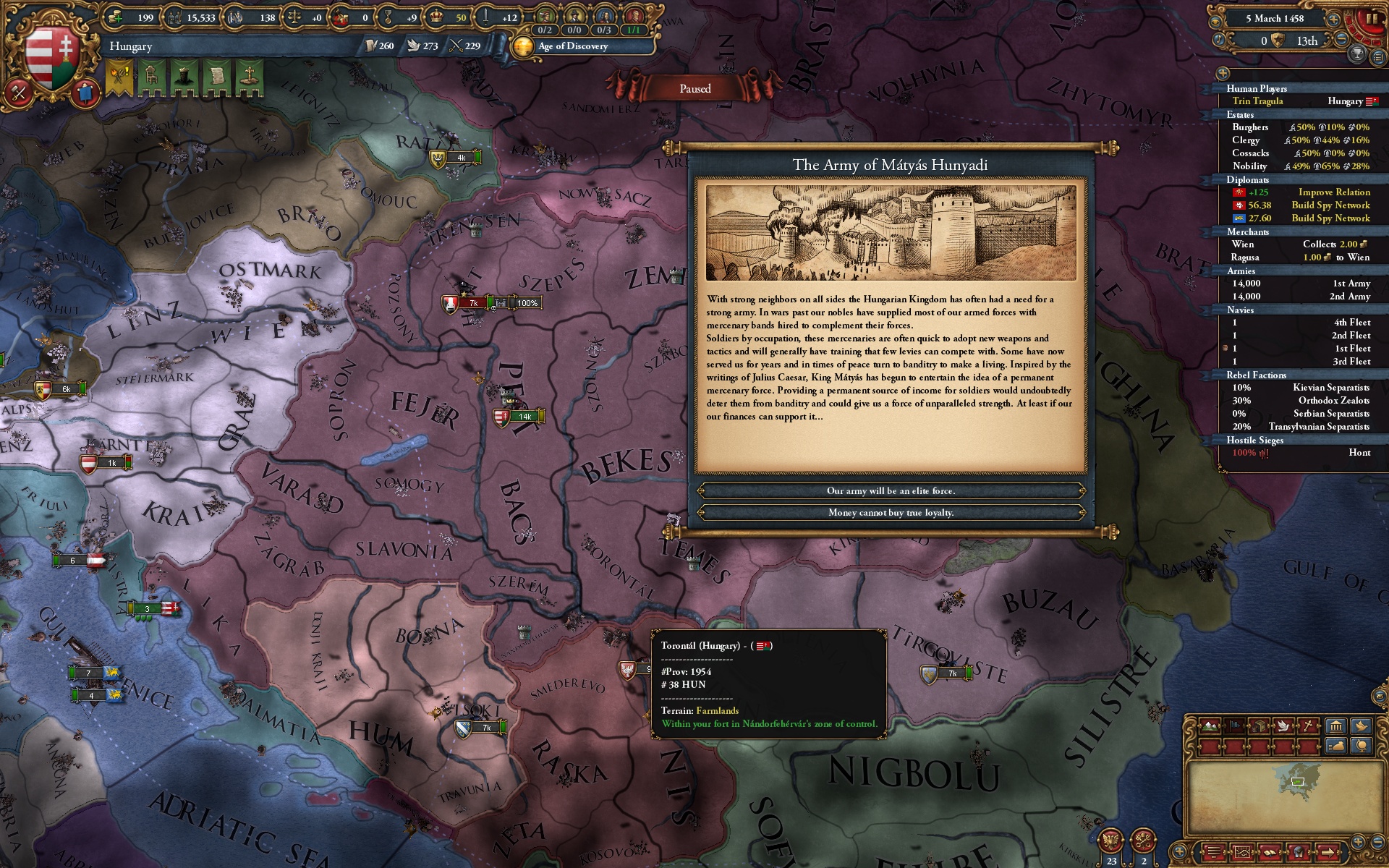 Hoping to both make Hungary more influential in the early game and to make the region more realistic and interesting to wage war in we have added a small number of provinces to Hungary in the 1.21 patch.

Hungary has received new events as well as reworks of their existing events. This is a broad (but not quite complete) overview of what we have added and why: 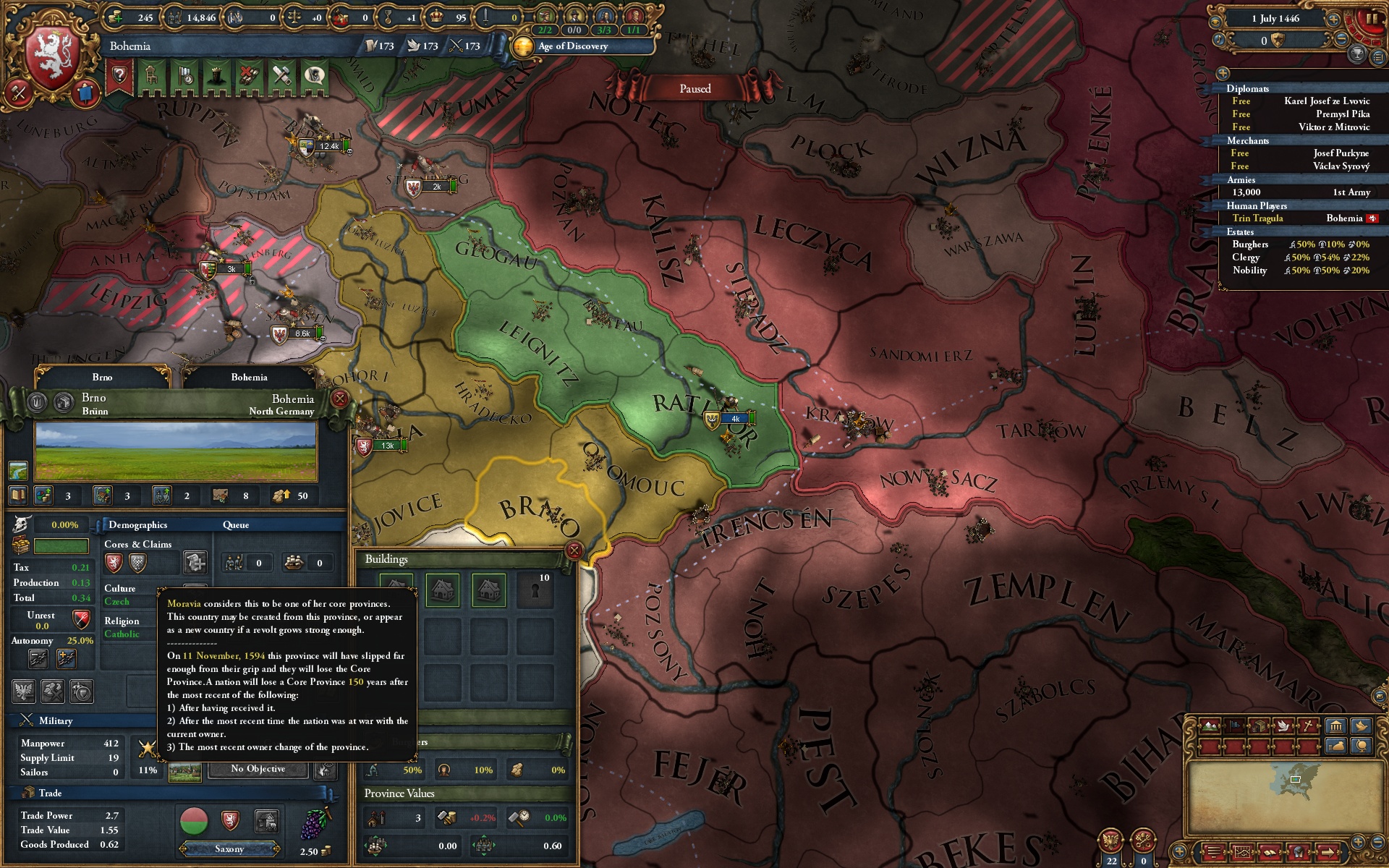 In order to add more depth of maneuver and historical detail we have now split the province of Moravia into Brno and Olomouc and added a Moravia as a revolter country.

In Silesia we have added the province of Leignitz/Legnica and revised starting development values and trade goods a bit to better represent the importance of this area.


Events:
While the Hussite wars are a thing of the past in 1444, the Bohemian people are still largely heretics to Catholic Europe. Ladislaus the Posthumous is the presumed King of Bohemia as well as Hungary but the de facto government of Bohemia lies with the Hussite factions under George of Poděbrady.

Even prior to Hungary patch you could choose to support the Catholic or Hussite party but now this choice has a bigger impact than it used to:

With the Hussites in power you will now be less liked in Europe but enjoy stronger support internally. You will benefit from the tactical experience of the Hussite soldiers but the Catholic estates may offer the Bohemian crown to a foreign monarch willing to defend them.

Unless the pope acts against the continued heresy in Bohemia a strong Hussite movement could also make the Reformation trigger earlier than it otherwise would.

Prior to 1.21 Königsberg and Danzig have been connected by a strait at the end of the Vistula lagoon. This had the unfortunate side effect that the fort in Königsberg could prevent movement between Danzig and Marienburg. Something that was impossible to get around without a fleet. The strait was also unhistorical as by 1444 the Vistula spit was no longer open and the ports inside the Vistula lagoon did not have access to the Baltic sea.

In 1.21 the Vistula spit has been extended all the way to Königsberg, this means that you can now get to the fort there (though it will count as crossing a river) and that Marienburg and Ermland now start without ports.

Austria has had a number of their existing events modified and can now also get new events relating to Hungary if they should come to control the country. Most importantly the advance of the Turks event now gives Austria permanent claims on Royal Hungary and Hungary itself is more likely to elect Hunyadi candidates to their throne, severely hurting relations with the Austrian monarchy.

Serbia was not the main focus of this patch but together with the addition of the province of Belgrade we have added a decision for the Serbian state to make Belgrade their capital if they are able to retake it from the Hungarians.


Moddability:​
That is not all that is new in the Hungary patch however. I will now leave the word to @Gnivom who, aside from programming the AI, has also been working on improving the moddability:

Ever wished you could add or multiply values in triggers? You now can! Sort of, at least. The variable_arithmetic_trigger (VAT) allows you to use export_to_variable to a local variable, that only exists within the current trigger and its children. The following effects have been modified to be usable within the VAT (as well as, as mentioned, export_to_variable):
When used within a VAT, they can only modify variables created in a VAT, as triggers are not allowed to modify the game state. The triggers that evaluate variables can also evaluate local variables.

A VAT has the following members:
When the VAT is evaluated, it will first execute the export_to_variable effects, then go through the other effects and triggers in the order they are listed. Whenever it comes to an effect, it executes that effect. Whenever it comes to a trigger, if that trigger evaluates false so does the VAT, otherwise it continues. If it gets past all the triggers, it evaluates true. In that sense it is like the AND trigger. When the trigger is done with its evaluation it destroys all variables created in its export_to_variable effects.

Code:
One of the smart things with this design is that you can create conditional statements by utilizing the fact that AND and OR triggers stop evaluation when one child returns false and true, respectively. Check the following, more advanced, example:


Code:
Although the syntax is horrible, this can be nested as much as you want to create really complicated logical conditions. It should be noted that variables are performance heavy, especially the export_to_variable, although that has been significantly improved in 1.20 and 1.21.

Some modders may have noticed in 1.20 that we moved most of the differences between subject types to a script file. As of 1.21, entirely new subject types can be added just by adding entries in common/subject_types. The old subject types are still referred to in the code however, and can’t be removed. Just adding them there won’t make them visible in the game however. For that I added scriptable diplomatic actions.

In 1.21 you will be able to see a new folder in common called new_diplomatic_actions. This system is currently independent of what happens in diplomatic_actions, and they can’t be combined. One diplomatic action has been added there, and it might be easiest to learn how it works by checking that example, which asks someone to become your Dummy. Two things should be noted though. First, the AI will as it is never send these actions. I’m thinking of a way to make that work for a future patch. Second there is an entry called ai_acceptance. This is how it works:

As 1.21 is not yet available to you, I’ll paste the relevant script here for reference:

In subject_types I added this:

Code:
The result looks like this (I didn’t bother localizing ALWAYS_TEN): 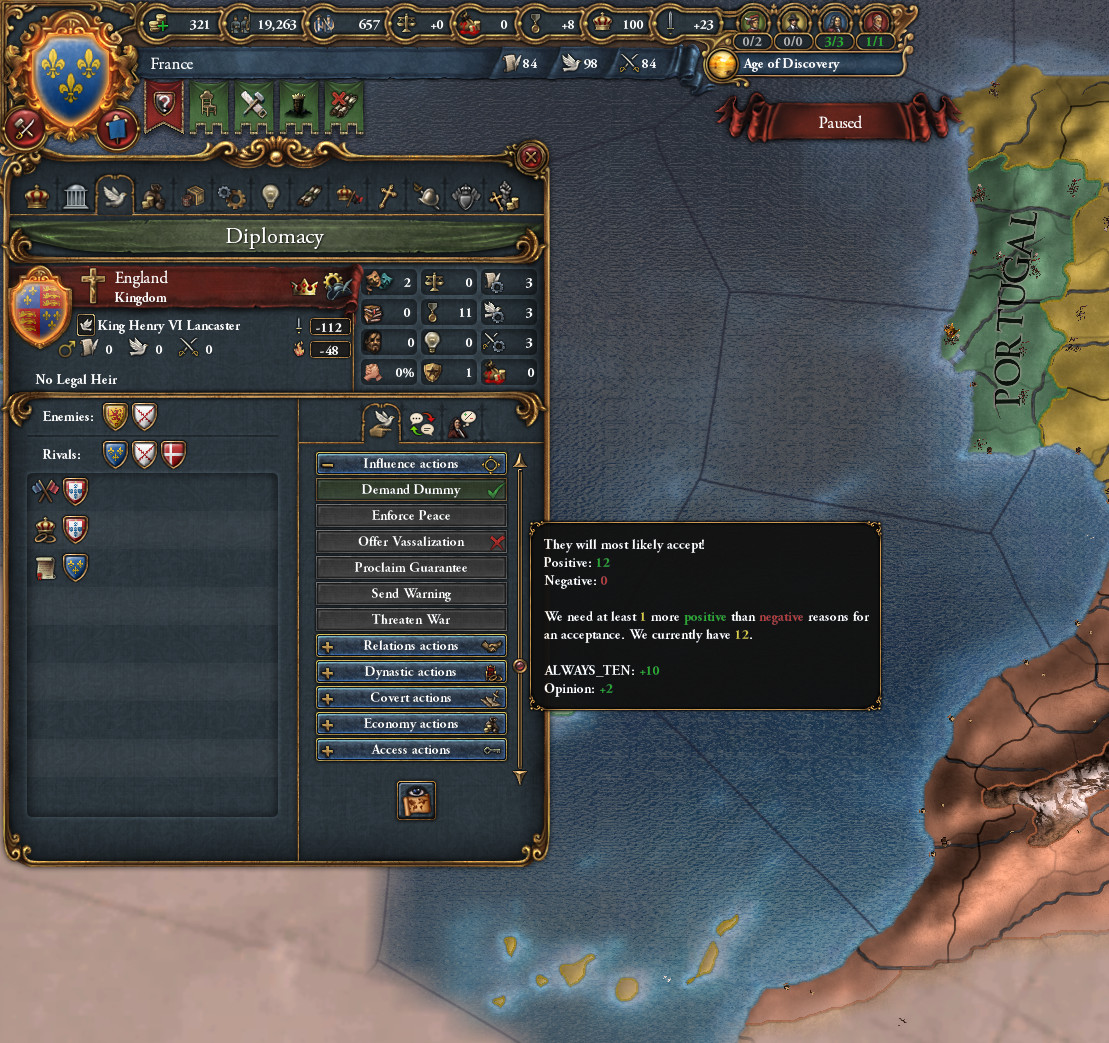 Scriptable diplomatic actions will be in the 1.21 patch when it releases, but it is a feature we plan to improve and expand upon in the future.

Last but not least our Mod Coordinator @Divine has also been working on a couple of additions to the 1.21 patch. This is a small list of those from the changelog.

That was all for today about the Hungary patch and the content related to to Hungary and its European surroundings. Next Tuesday we will be sharing the complete changelist for the upcoming patch, which will be released in late april.
Expand signature
No fighting in here! This is the war room!

I havent been familiar with 1.20 yet!

Nice. Would be cool if Bohemia got similar update in the future too

In the case of Hungary getting permanent claims on Bohemian land, will they still have to fight the emperor if they choose to attack?

Will Hungary still be locked out of declaring wars for the first 10~ years due to the regent?

I love everything in this!

Finally we have Belgrade!
Expand signature
Better representation of Armenians in Anatolia

Pawelo342 said:
I love everything in this!

I'll be sure to tell @The Real Timor that you like it
Expand signature
No fighting in here! This is the war room!


Trin Tragula said:
Slovakia/Upper Hungary has been redrawn and the new province of Trencin now guards the northern border of the Kingdom. Development and trade goods of the area in general has been revised a bit to better reflect reality.
Click to expand...

Do they still keep their gold mine in Szepes?

Got an ETA? Also, what idea set does Moravia use?

@Trin Tragula
Does Moravia have its own NI set? If so, I hope they include one for their famous wine, their strict catholicism and maybe even the Přemyslids.
BTW, one of the biggest dev diaries for a long time
Last edited: Apr 18, 2017
Expand signature
"In signum concordiae patris ac patriae MDCCCVI.
Nec temere, nec timide.
Cui non civium servitus tradita, sed tutela."
-
Furor Teutonicus - The Archaeology and Tribes of the Ancient Germanics
On the Boii, Vindelici, Raetians and "Germania"
The Celtic invasion of Greece and the Celts in Pannonia and Transylvania
Heritage Suggestions for some European Barbarians
All suggestions are incorporated into this mod:
Imperator: Barbaricum - 1.4.x​

The Utopia patch for modders.

Great DD. Trin, could you elaborate, how the Black Army is working? Are they normal mercs, only with higher costs and maintence, which are tied to events?

Wow. Huge DD, and all for a relatively small patch, that will be out within a month of the last patch? Bravo!
Expand signature
Nationality: Yankee
Occupation: Clerk
Religion: Catholic
Issues: Free Trade, Laissez-Faire, Pro-Military, Pluralism, Full Citizenship

@Trin Tragula Does Nitra have its core on Trencsén? Also, what will be the capital of Nitra now that province of Ersekújvár was split between Poszony and Hont?
Last edited: Apr 18, 2017

That moment when you feel more excited about flavor patch than "biggest feature of EU4 (i.e. ages)"...
Expand signature
Thou shalt not make a machine in the likeness of a human mind.

Don't forget @Divine
Expand signature
No fighting in here! This is the war room!

Mortheim said:
That moment when you feel more excited about flavor patch than "biggest feature of EU4 (i.e. ages)"...
Click to expand...

Qwerthas said:
Does Nitra have its core on Trencsén?
Click to expand...

Yes.
Expand signature
No fighting in here! This is the war room!

rho said:
Do they still keep their gold mine in Szepes?
Click to expand...