Hello and Welcome to another development diary for EU4. This time we take a look at Africa, and the changes there. This one of those times when pictures are worth more than 1000 words.

First of all, we have added the entirety of the Kongo region, reaching up to the Great Lakes area. Not just home to the countries of Kongo, Loango and Ndongo, this area now have multiple nations, and could be the basis of a powerful empire. 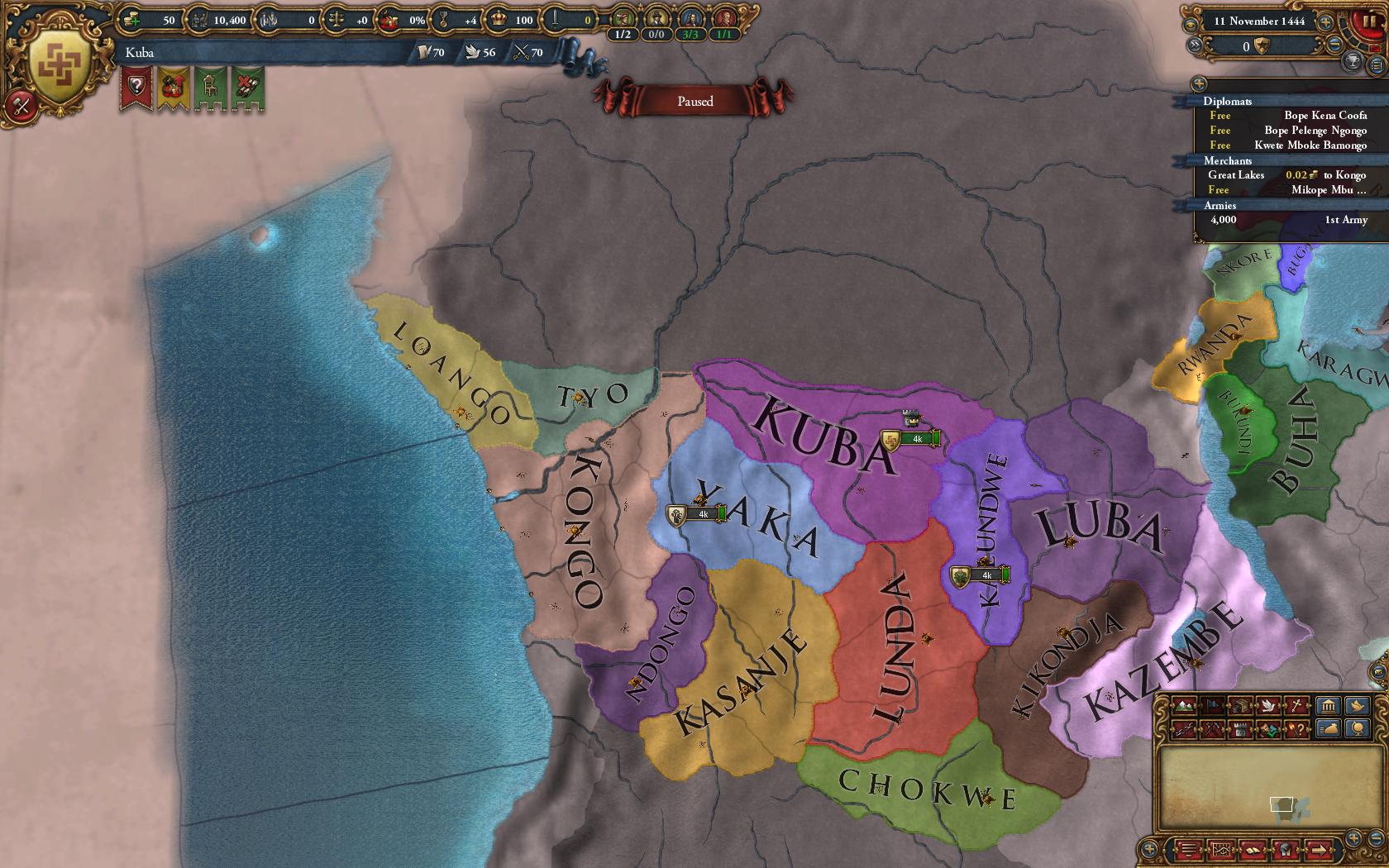 While we have added over 20 new nations to Central Africa, we have also added new idea groups and unique ideas for these mighty states, including the Great Lakes ideas for our states near the Lake Victoria. These Central Africans also have their own unique technology group, with technology costing 65% more than Westerners.

North we find the Great Lakes Area, with lots of minor nations, some that still exist today, after a brief period of colonialism. 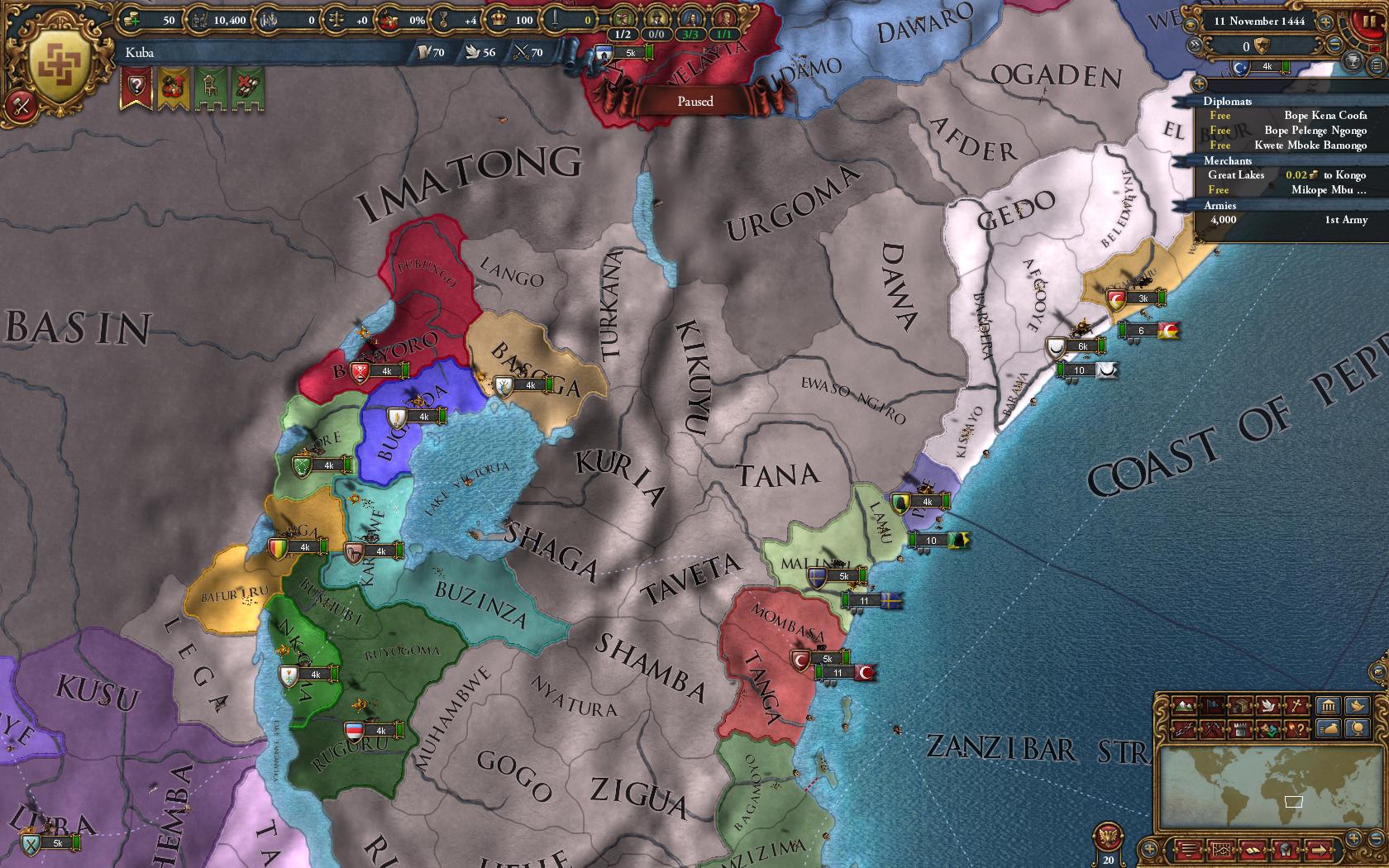 Southeast of Kongo, is Zambia and Mozambique is now filled with provinces and several new nations as well. Magagascar has also seen a rework, with 5 nations struggling for supremacy of the island, complete with their own national ideas and Pagan/Islamic friction 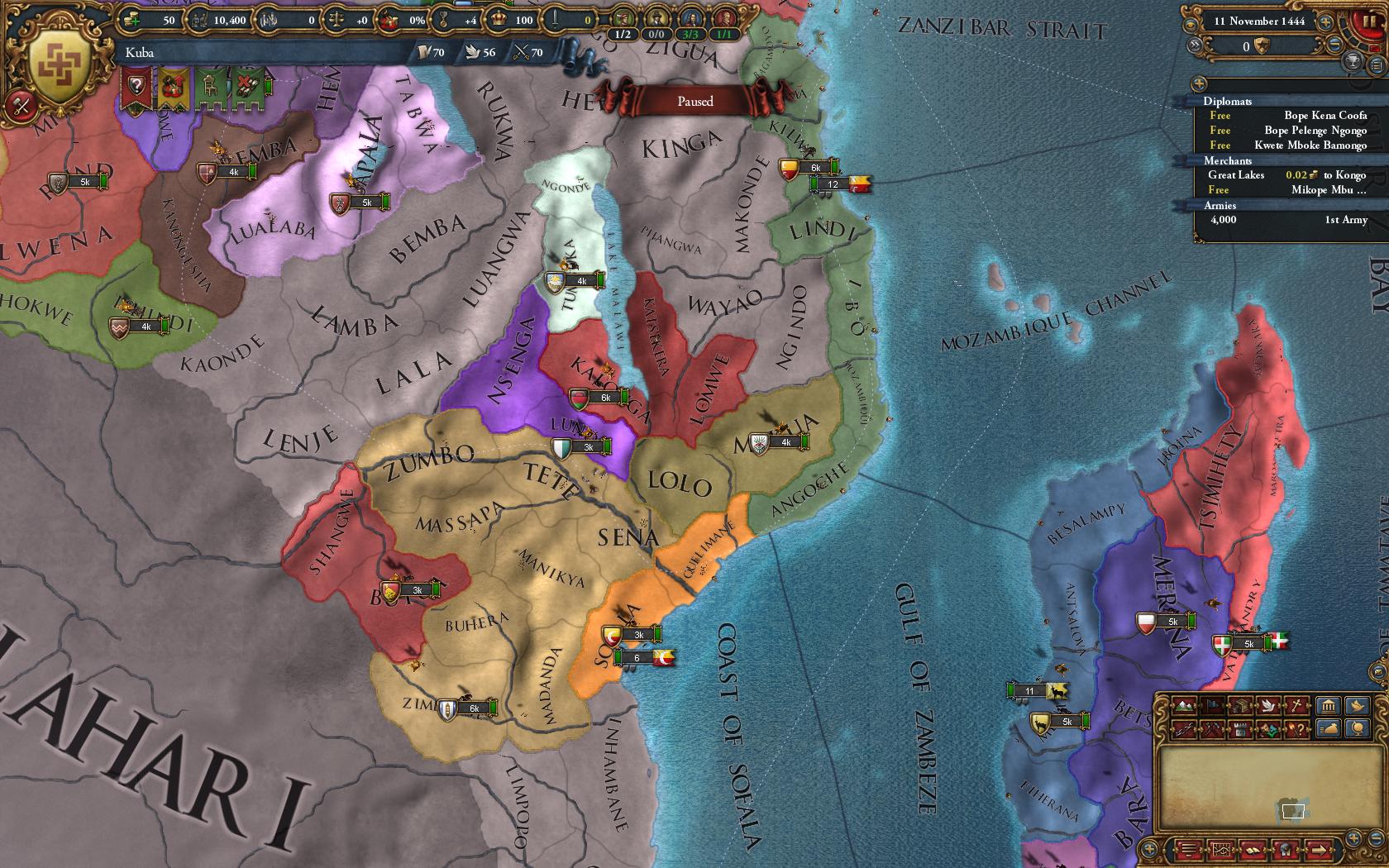 The tradesetup for Africa have changed as well, Zanzibar is now the coast tradenode, with three inland nodes of Kongo, Great Lakes and Zambezi leading to the coasts either west and east. This makes the Zanzibar node a hugely important tradenode for everyone along the Indian Ocean. 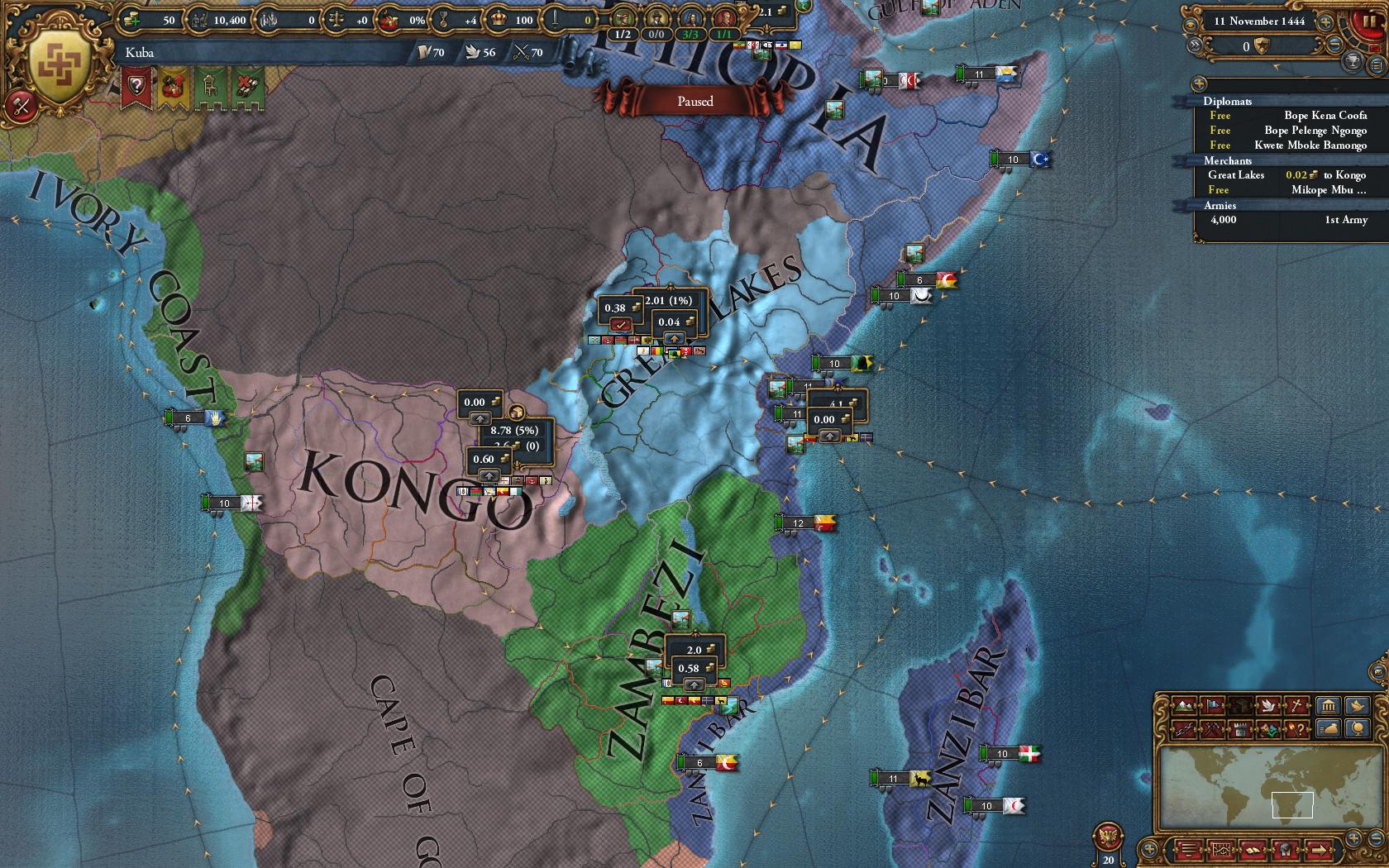 No diary on our Africa changes would be complete without giving some attention to religion in the region. Previously we had carpeted non-specific pagan areas with Shamanism or Animism. Now many of our African provinces which have not converted to Islam are portrayed with the Fetishist Pagan religion which grants greater tolerance to heathens and a diplomatic reputation bonus along with the usual pagan decision. 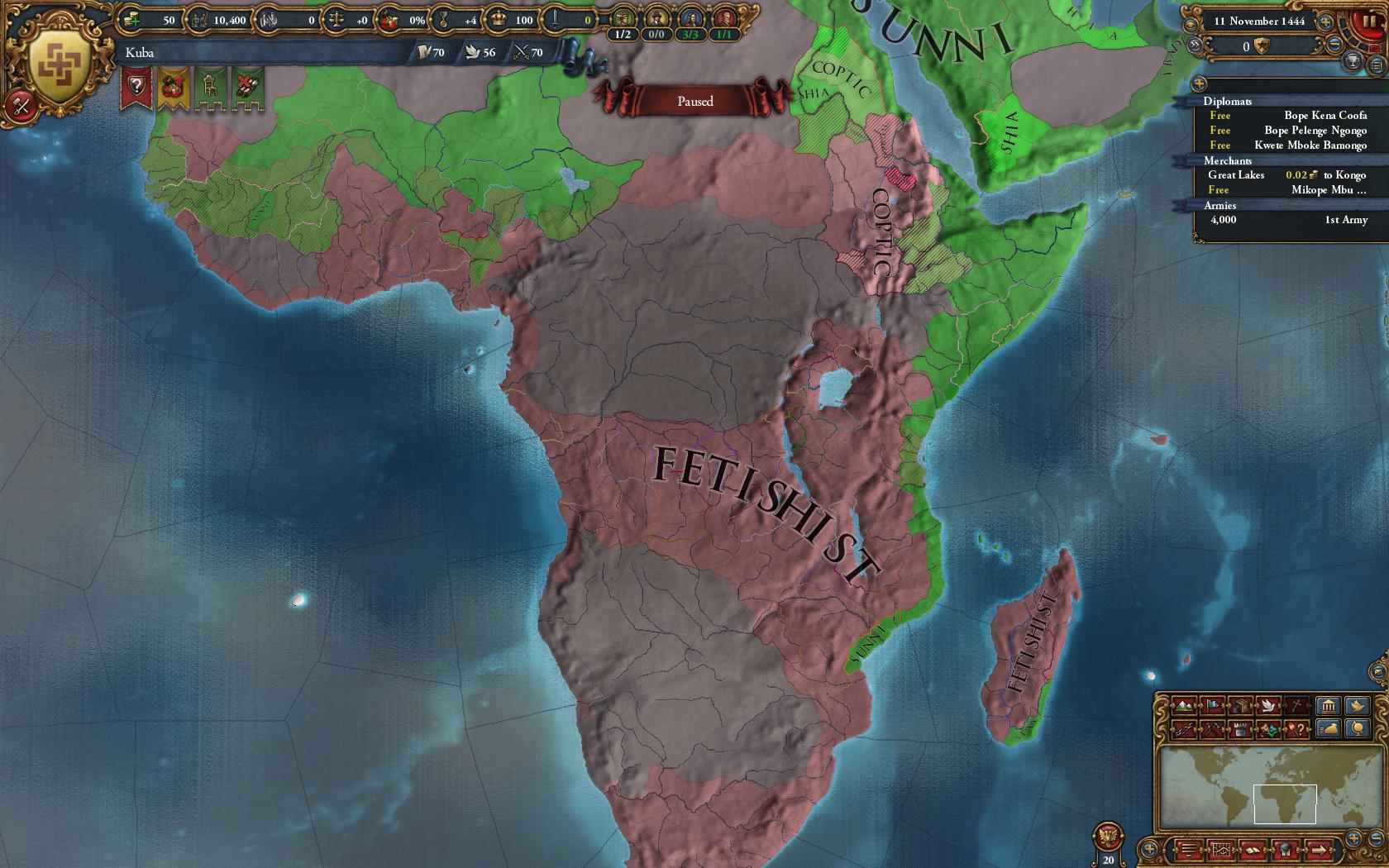 Next week, we’ll talk about two different and new concepts, one which has its own icon in the top bar.
Expand signature
Johan Andersson
EVP Creative Direction at Paradox Development Studio AB - Follow me at Twitter!

Holy cow, that's far more improvement then what I was expecting!
I can't wait any longer, with so many new nations around I'm going to have a hard time figuring out which one to try first
Reactions: Astrozz, eruntano22, Horkak and 63 others

I like these additions, now just have to wait for a new playthrough
Last edited: Feb 18, 2016
Expand signature
-> "That should have probably been "it has no internal team member that isnt busy with other projects championing ideas for development". Both me and Wiz love Victoria for example but are fiendishly busy with other stuff. Don't worry there is a secret word document with design several people have been adding stuff to even since HoD was half-way done. We'll get around to a Vicky eventually." - Podcat

Victoria 3 has no internal champion
Reactions: Astrozz, Tapio, ThatDaniel and 7 others
J

Will there be anything to help the African nations keep from getting conquered by the Europeans, clear across the continent? I'm pretty sure that sort of thing didn't really happen until the Scramble for Africa in the late 1800s, after all.
Expand signature
Reduce Construction Ship Micro - A Stellaris suggestion thread. Come let me know what you think.

Personality Trait Rebalancing: Every personality trait should be worth considering - Mod thread - Suggestion thread
(Updated for 2.5.2.)
Reactions: EliteVesper, CrisisCauser, Flamenexus13 and 101 others

Oh nice, now I want to play an Africa game, too bad I already have African Power. Give new achievement in the area pls
Reactions: Carlos_RSL

Fetishists in Africa? Oh, naughty Paradox! And here I thought you wanted to keep the game PG-13!
Reactions: User29, SirUltraviolence, Morrowind3 and 131 others

I literally spit my tea when I realised it said Fetishist.
Expand signature
Arise King Kronos, bastard of the void.
His enemies fled, their eternal dark serenity destroyed.
Reactions: Morrowind3, Pyrrus, eruntano22 and 60 others

Holy smokes, these are some HUGE improvements. I like it a lot.

However, this makes me question what will happen to the classic Animist, Totemist and Shamanist pagan religions in the long run. Will you try to replace most of them? will you give them more flavour?
Reactions: eruntano22, guillermo2620, fetusthebard and 18 others

I should think about doing african Power before 1.16.. More countries sounds like more problems
Nevertheless great changes!
Reactions: Morrowind3, eruntano22, pedrito_elcabra and 5 others

LanMisa said:
Fetishists in Africa? Oh, naughty Paradox! And here I thought you wanted to keep the game PG-13!
Click to expand...

That is an amazing job! Very well done. It is a massive addition that improves the immersion. Buganda world domination incoming!
Reactions: Cain Lolsson and mcmanusaur
J

But the upper region of the Kongo Basin is still one huge wasteland and could be improved slightly.
Reactions: magnusr, eruntano22, fetusthebard and 1 other person

Does this mean it is time for Shaka Zulu now? Please say yes!
Reactions: Aoderic, Trace284, Voltion99 and 11 others

Now I wonder..what is that symbol between Prestige and Stability? That one with the 0% in it? Looks like an inflation counter...
Reactions: SnowHawkKiller, Koji Jp and Kazimierz IV

Krebsig said:
Does this mean it is time for Shaka Zulu now? Please say yes!
Click to expand...

Sorry, no zulu state. The rozwi who took over Butua and later most of whats Mutapa in 1444 are considered by some to have pioneered the same type pf tactics and training though.
Expand signature
No fighting in here! This is the war room!
Reactions: Aoderic, Hareoon, IrishGirl and 50 others
Show hidden low quality content
You must log in or register to reply here.
Share:
Facebook Twitter Reddit Pinterest Tumblr WhatsApp Email Link
Top Bottom