Menu
Install the app
You are using an out of date browser. It may not display this or other websites correctly.
You should upgrade or use an alternative browser.
Europa Universalis IV 74580 EUIV: Suggestions 15713 EUIV: Technical Support 5554 EUIV: FAQ & Strategy Guides 176 EUIV: AAR's, Let's Plays, and Fan Fiction EU IV: Alternate History Short Story Contest Contr 26
Show only dev responses

Good day all, and welcome to another Dharma Dev Diary. If we somehow did not reach you with this announcement yesterday, then let it be known that we have a release date for Dharma, and your mastery of a subcontinent can be made a reality on Thursday September 6th

Which means we have just a few more dev diaries between then and now. We have covered the new features and mechanical changes in both Dharma and 1.26 Mughals update, but there are still some things to cover, namely the Content Pack and Achievements. This week we'll take a look at the former. 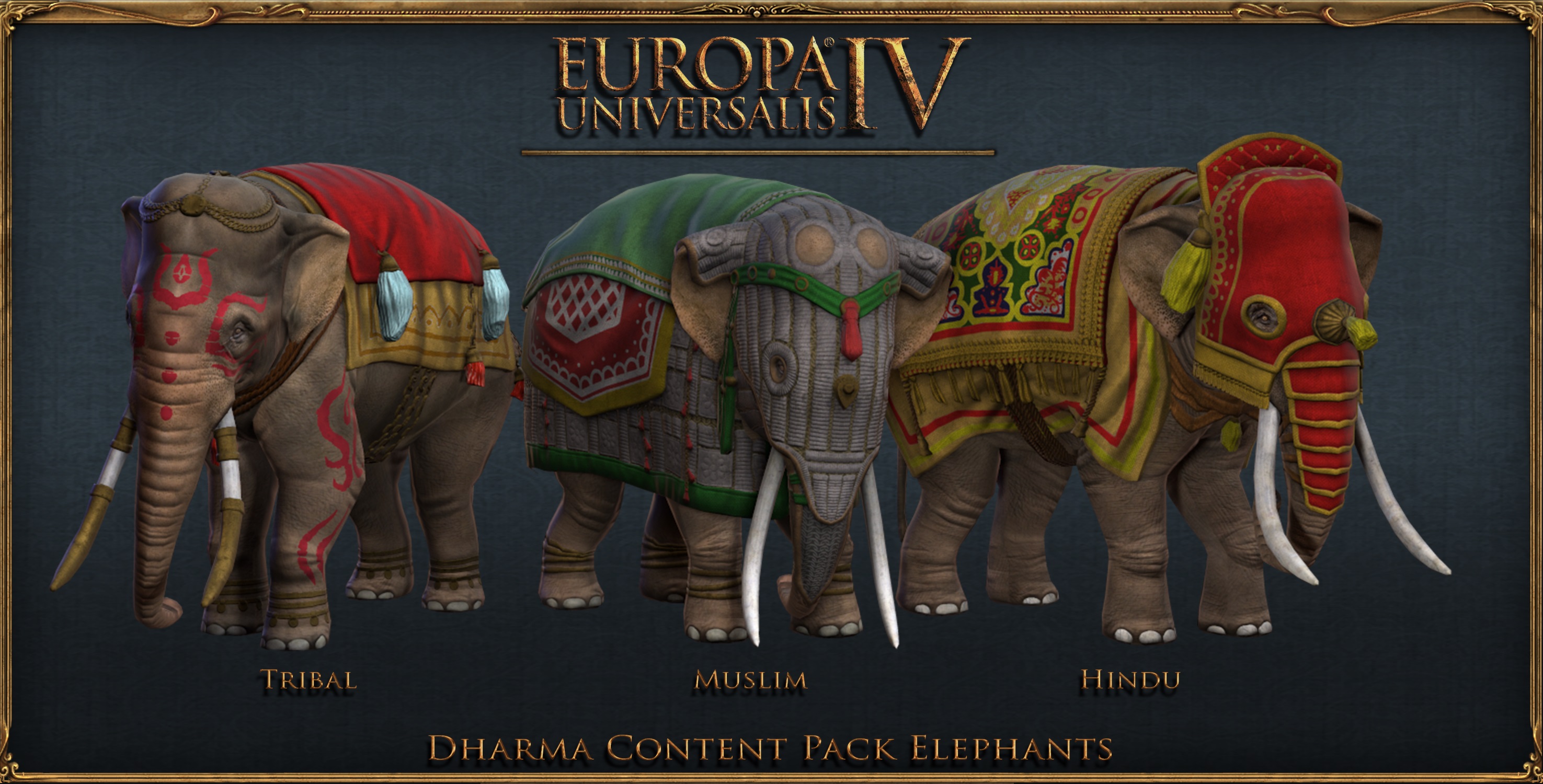 Dharma itself contains a generic elephant model which will be used be all applicable nations. For owners of the Content Pack, you will have your own Subcontinental Pimp My Ride as you get your own elephant model based on you playing as a Muslim, Hindu or an Orissan Tribal nation. For contrast, here is the Muslim Elephant model contrast to the standard one:

While I have admittedly gone elephant crazy, there are also new unit models for bipedal warriors. For the Muslims, we have made units for all tiers for Bahmanis, Gujarat, Jaunpur, Malwa and of course, the Mughals. For the Indians, we have Nepal Mewar Gondwana Orissa and the South Indian Minors getting love. Here are the renders for a them:

5 years ago, when the game shipped, there was not nearly the level of diversity in 2D and 3D art across the world. We've come a long way from having them same Caucasian faces across the entire world. 42 Indian advisor portraits are added along with this Content Pack to further our commitment to adding depth and immersion worldwide.

As for the music, the powers that be cannot let me embed the sweet tunes here in the forum, but to get an idea for them, one of the tracks is used in the background of our Player Profiles for the Dev Clash. Listen in and admire @omfgBlondie 's handiwork:


Remember that everything talked about today is content you will find in the Dharma Content Pack, which releases at a price of $7.99 alongside the Dharma expansion.

Yay! Mughals got their own units! And also excited for multiple elephants and advisors!


DDRJake said:
Here are the renders for a choice few:
Click to expand...

How come just a few? Usually you guys post all of them. I thought it seemed a bit thin compared to normal :/
Toggle signature
Ideas to Improve Golden Century
Disappointing Accomplishments in EU4
"If you don't want fantasy nations why would you suggest Belgium?"
"Glorious tent-living master race cared nothing for the cries of the filthy house-peasants" - @Fishman786

Asking the real questions here - when is that third Achievement icon going to become a forum profile picture? I need that.
Toggle signature
Jargon help: "On Probation" in the EU4 forums means "I highkey don't like Golden Century".

Part of the modding teams of the following projects - click their names to check them out.

Fall of Islam - A world where Islam failed to gain traction in it's early conquests. Arabia is divided, the Yuan still rules in China and old faiths like Christianity and Zoroatrianism remain in firm control of large chunks of the old world. What will become of this alternate timeline? #Updated for 1.29

The Collapse of the Ming - More flavor and events around China, for the potential end of the Great Ming - features an event chain for the Ming's collapse, as well as a bookmark in which the Ming starts mingsploded! What warlord will be the next Emperor? #Updated for 1.29

Phoenix of the East - 9 years away from it's downfall, Constantinople was still one of the bastions of culture of the world, and it's citizens weren't particularly willing to let it fall - take control of the seemingly doomed nation, and revert history against all odds in this decision, events and flavor pack for the most popular of the EU4 minors! #Updated for 1.29

Complaining is my hobby

Vegetarian WC... What are you planning to do to my livestock provinces you Indians!
Toggle signature
EU4:
Trade system in EU4 is fine, but also limits the game a lot.
How to limit Tag-Switching with changes to culture shifting, instead of End Game Tags (And shorter version)
How Government Reforms seem poorly designed, and how I think, they can be improved. (Partially incorrect)
My Shinto Incidents Event chains' guide
Stellaris:
How no events in Stellaris make the game seem boring and repetitive
About the Galactic and Local Markets making economy too simple to manage
N

Third is Nepal stitching two shoulder guards together to keep the sun out.

They look stunning! It seems everytime a content pack is released the quality improves.

I imagine one of the achievements involves curry.
Toggle signature
Do not wait to strike until the iron is hot; but making it hot, by striking.

May the road rise to meet you, and the wind at your back.

@DRRJake My guess for the third achievement: Sikh This!: Own Edingburgh and Londan and convert them to Sikh.
Last edited: Aug 14, 2018
Toggle signature
Killed infants in Crusader Kings, did ethnic cleansing in Europa Universalis, doomed the world to totalitarian fascist Mexico in Hearts of Iron but in real life I wouldn't hurt a fly.

Achievement names:
Eat Your Grass
Coffee and Sweets
Look at This Guy
>
Toggle signature
Do not wait to strike until the iron is hot; but making it hot, by striking.

May the road rise to meet you, and the wind at your back.

Complaining is my hobby

Maybe the second is like 5 o'clock be the leader producer of tea as GB.
Toggle signature
EU4:
Trade system in EU4 is fine, but also limits the game a lot.
How to limit Tag-Switching with changes to culture shifting, instead of End Game Tags (And shorter version)
How Government Reforms seem poorly designed, and how I think, they can be improved. (Partially incorrect)
My Shinto Incidents Event chains' guide
Stellaris:
How no events in Stellaris make the game seem boring and repetitive
About the Galactic and Local Markets making economy too simple to manage

Cuchulainn_of_Galway said:
Look at This Guy
Click to expand...

You know that achivement is marry a 6/6/6 Charismatic Fertile consort
Last edited: Aug 14, 2018
Toggle signature
Sorry if my English is bad

That first one probably has something to do with Kale.

Please, please, please, have some king of achievement related to the elephants (ideally with some reference to the Oliphaunts from LOTR)

Achivement 1, Achivement b, Achivement III.
Toggle signature
If I could be three birds, I could see myself from above as I'm flying above myself.

Second achievement i think is a danish achievement; since it looks like a cup of tea and a danish pastry. So probably about getting a charter company in Ceylon.


Zephyrum said:
Asking the real questions here - when is that third Achievement icon going to become a forum profile picture? I need that.
Click to expand...