Jump to latest Follow Reply
Menu
Install the app
You are using an out of date browser. It may not display this or other websites correctly.
You should upgrade or use an alternative browser.
Europa Universalis IV 79303 EUIV: Suggestions 17863 EUIV: Technical Support 6380 EUIV: FAQ & Strategy Guides 217 EUIV: AAR's, Let's Plays, and Fan Fiction EU IV: Alternate History Short Story Contest Contr 28
Show only dev responses

Good day all, the time has come at last to talk in depth about the much-teased feature that has our players not wanting to go back to 1.19 for fear of playing without it. Today the spotlight is on Mandate of Heaven's new Diplomatic Macro Builder.

Owners of Mandate of Heaven will have access to a new Macro Builder designed to truly make your diplomats work for their meager salaries. The Diplo Macro will allow you to do almost all diplomatic actions from the Macro menu without having to click from nation to nation. 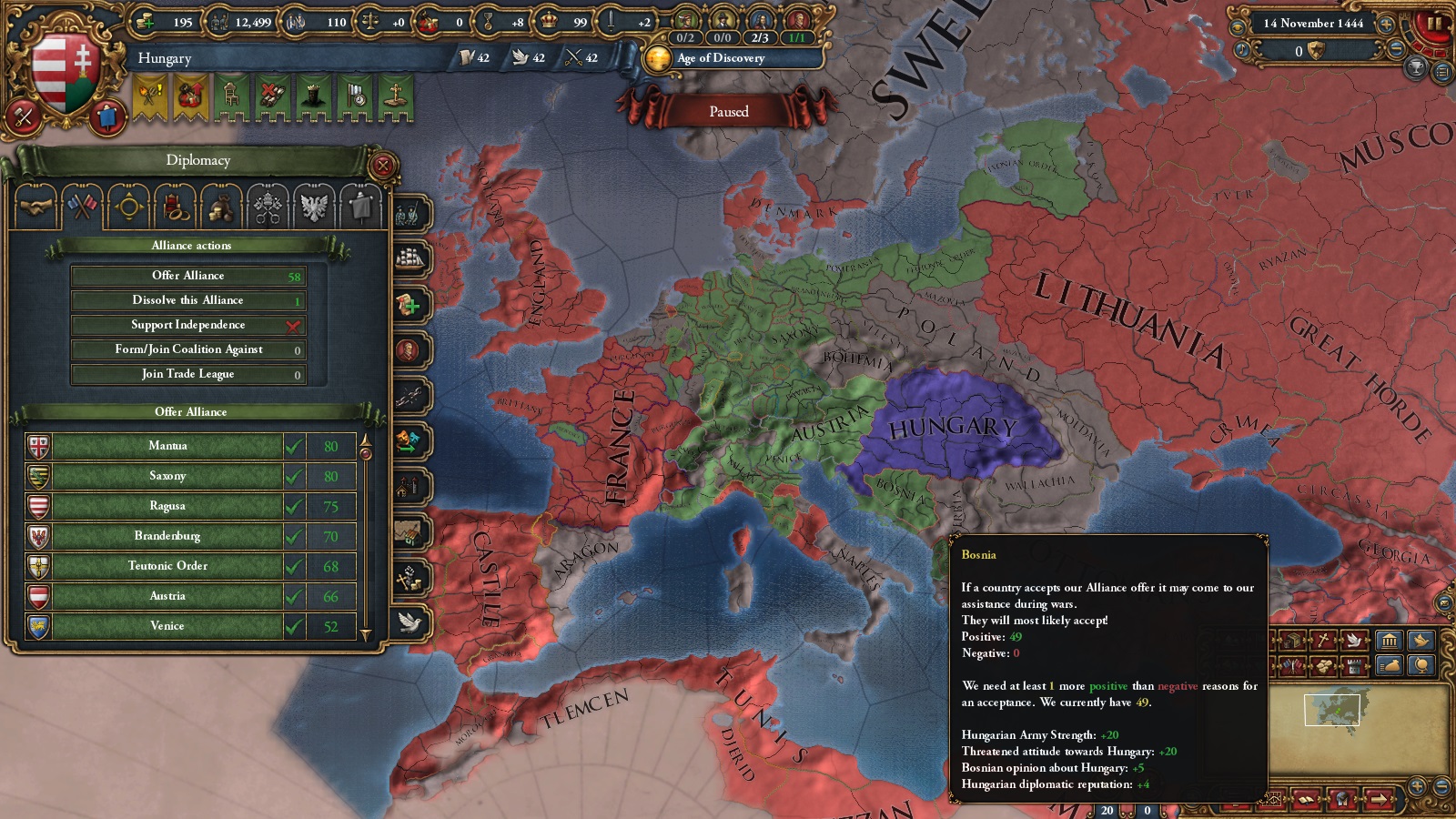 Nations who would accept your diplomatic offer are shown on the map in green. Those who would not accept are shown in red while those who are completely ineligible to be asked are in grey. Hovering over a nation will give you a breakdown of the reasons for and against agreeing to your offer. You can use either the map or the list on the Macro Builder to check this information and click on either to confirm the diplomatic action. 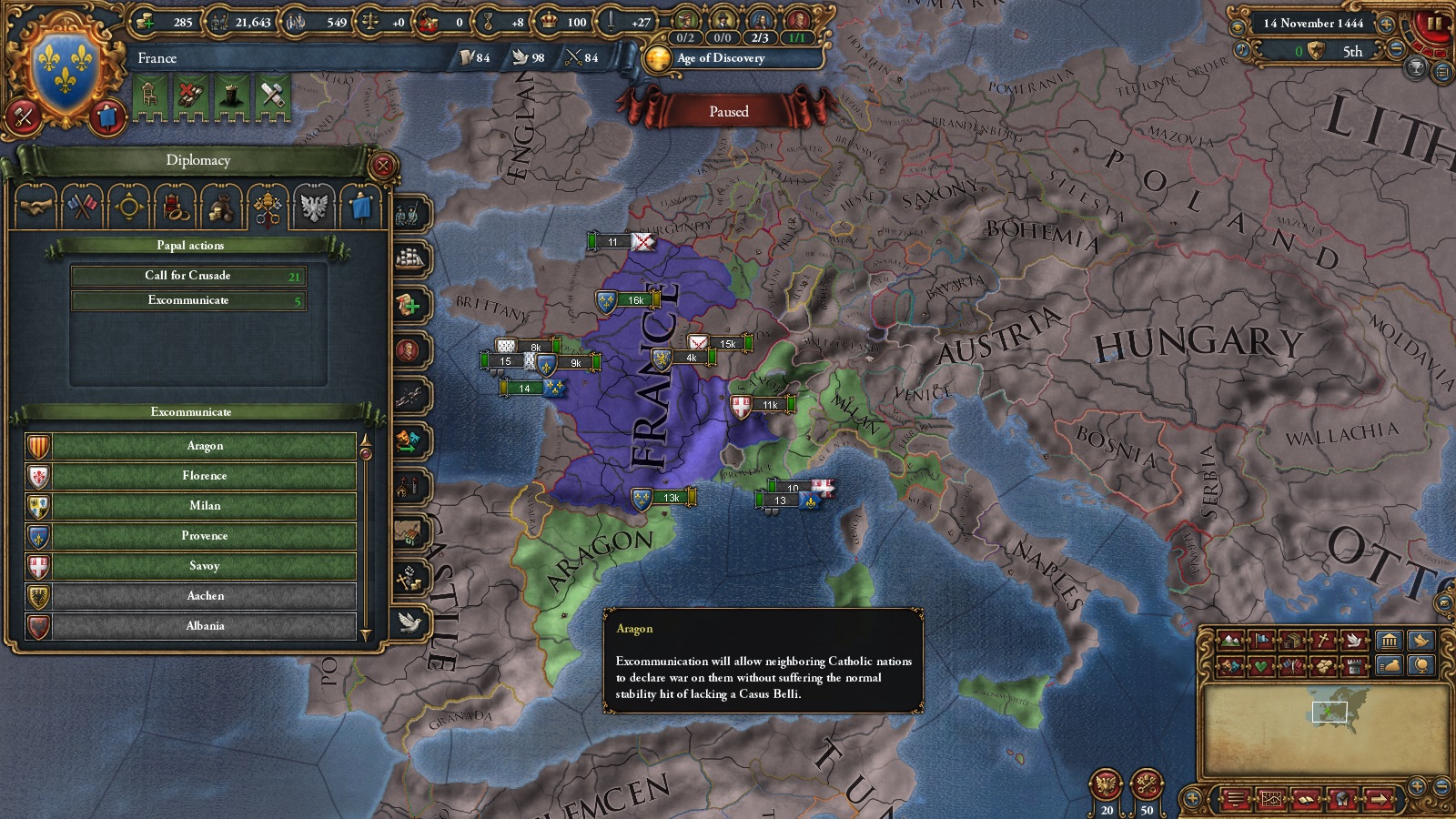 Diplo actions included are Alliance, Influence, Dynastic, Economic, Papal, Emperor and Great Power actions. Gone are the days of desperately searching for who will marry you or who you can kindly ask the Pope to excommunicate.

But we're overlooking one tab here. What's that on the far left? 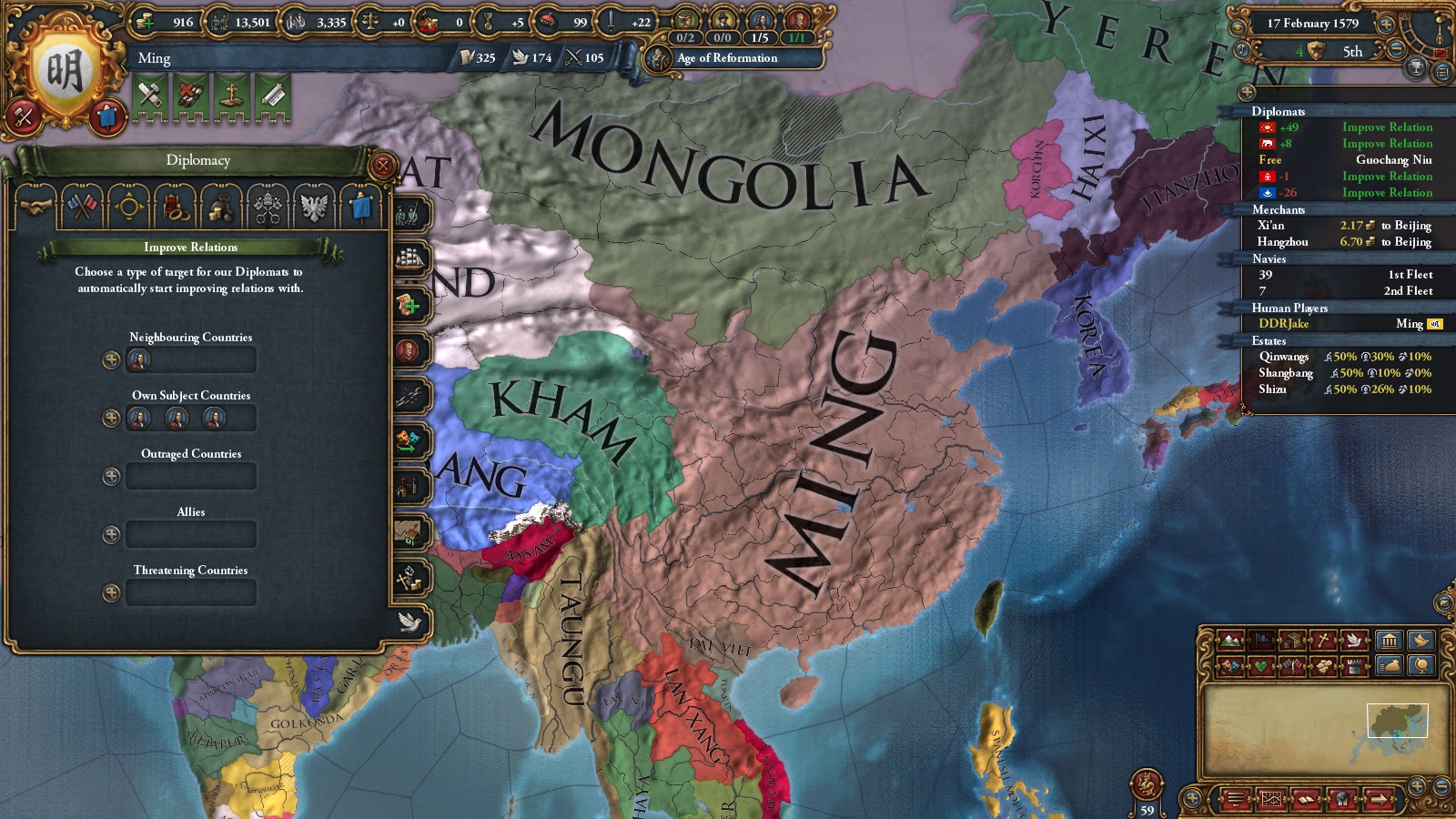 Improve Relations is our Leftmost tab and allows for the automation of improving relations via your diplomats. There are 5 rules which you can assign diplomats to work themselves to the bone over.

The automated diplomats also have some logic of their own for who they target. They will recognize "hopeless" attempts to improve relations with nations who already have irredeemably low opinion of your nation and will judge nations based on strength and distance from you when placating threatening nations.

Clicking on a diplomat will stop them from their improve relations mission while right clicking will simply cancel the automation and they will continue to improve relations with the nation they are already active in.

The Diplomatic Macro Builder will be part of the Mandate of Heaven Expansion, which releases for $19.99 on April 6th 2017. The day of release is fast approaching and in next week's diary we'll be covering a variety of miscellaneous additions and changes.

Until then though, it's time to get ready for the Dev Clash Multiplayer session. Chris and I must resist grabbing the blue paint and saltire. See you then!
Last edited: Mar 20, 2017
Toggle signature
The Three Mountains: EU4 Ryukyu World Conquest AAR
​

Yes yes yes this is so awesome gone are the days of assigning diplomats to every stupid Italian minor to keep them all happy. Thanks guys

Not sure I'd use the automated Diplomats, but the other parts would be extremely useful

So happy to see that improve relations thing. Is something similar in the pipeline for espionage? Building spy networks is something I'd love the option to automate in more or less the same fashion.
Toggle signature
"All that I have written seems like straw compared to what has now been revealed to me." - Thomas Aquinas

Can you also tell your diplomats to automatically build up a spy network?

The quality of life in this update seems to be amazing, as always I guess I'll be buying this day one.

As someone who is terrible at micromanaging diplomats, I love this feature already. Where do I sign?
Toggle signature
"It is well known that nothing is such thirsty work as the acquisition of knowledge."

I often want to do things like targeting the electors in the HRE and there appears to be no automation for that - so I hope (won't assume) that the 'old' interface is still available?
Toggle signature
"Nature always obeys her own laws" - Leonardo da Vinci
"Giraffes are heartless creatures" - HOI4 loading_tip_6

steveh11 said:
I often want to do things like targeting the electors in the HRE and there appears to be no automation for that - so I hope (won't assume) that the 'old' interface is still available?
Click to expand...

There will be nothing restricting the tried and true method of targeting individual nations for improving relations or diplomatic actions.
Toggle signature
The Three Mountains: EU4 Ryukyu World Conquest AAR
​

This is awesome! Probably the best quality of life improvement ever.

Shame about Florence stll always being hated be the Pope.
Toggle signature
Sit now there, and look out upon the lands where evil and despair shall come to those whom thou allied. Thou hast dared to mock me, and to question the power of France, master of the fates of Europe. Therefore with my explorers thou shalt see, and with my spies thou shalt hear; and never shall thou be released from vassalage until all is fulfilled unto its bitter end.

Do we still send again and again when our spy get caught?

Really looking forward to this. It will make a lot of things flow significantly more smoothly. I would love having a "Holy Roman Electors" option for the auto relationship improvement as well, though.

I was considering to postpone my purchase of this DLC until it's on sale... Maybe not though.

We are truly blessed

@DDRJake Thanks for the update!
However, before the multiplayer clash is underway, the last part of the previous week (Episode 24) still hasn't been uploaded
Will this be done soon?
G

In the end this expansion seems to change surprisingly little of the game.
- There's a lot of flavor for east asia.
- There's the macro builder which seems like a decent ease of life mechanic.

But for the majority of your game the only thing you will notice is the age systems and prosperity, as well as privincial edicts.

Seems like this expansion went for a few big features rather than many small (which I guess could be a good thing, just that in this case the big features are tied to a small part of the world). I guess it's kinda similar to how most of El Dorado were tied to America and the Nation designer.


Also: It would be nice if you could tie a Diplomat to a selected few countries. Most of the times what you want them to do kinda overlaps with some category, but not really. This way you could feel more sure that you actually get what you want.
Toggle signature
Check out my mods:
Expanded Stellaris Traditions which adds 48 new Tradition Trees to the game.
Expanded Stellaris Ascension Perks which adds 60 new Ascension Perks to the game.
Show hidden low quality content
You must log in or register to reply here.
Share:
Facebook Twitter Reddit Tumblr WhatsApp Share Link
Top Bottom