Menu
Install the app
You are using an out of date browser. It may not display this or other websites correctly.
You should upgrade or use an alternative browser.
Europa Universalis IV 74935 EUIV: Suggestions 15846 EUIV: Technical Support 5602 EUIV: FAQ & Strategy Guides 179 EUIV: AAR's, Let's Plays, and Fan Fiction EU IV: Alternate History Short Story Contest Contr 26
Show only dev responses
Threadmarks
Reader mode

Mekriff said:
I'm not sure it is unchecked... Starnan has clearly formed a strong bond with the Pope. And I'm pretty sure that when tensions rise, StarNaN won't be betraying God.
Click to expand...

Kaiser is head of the true church, so...you know...

Crap
As who?
R

I think this talk of StarNaN versus KaiserJohan is a little silly. Right now KaiserJohan is a target of a coalition of nearly every power in the world, except StarNaN. StarNaN is boxed in on three sides by members of this coalition. The choice for StarNaN at least in the short term is clear - work with the Kaiser to break down the PLC and the West to his benefit. Hungary is both of their ally so for now they will work as a decent buffer state (until the Kaiser wants his victory card). An alliance is in both of their best interests right now, a Koalition of Kaisers if you will.

Regaccio said:
I think this talk of StarNaN versus KaiserJohan is a little silly. Right now KaiserJohan is a target of a coalition of nearly every power in the world, except StarNaN. StarNaN is boxed in on three sides by members of this coalition. The choice for StarNaN at least in the short term is clear - work with the Kaiser to break down the PLC and the West to his benefit. Hungary is both of their ally so for now they will work as a decent buffer state (until the Kaiser wants his victory card). An alliance is in both of their best interests right now, a Koalition of Kaisers if you will.
Click to expand... 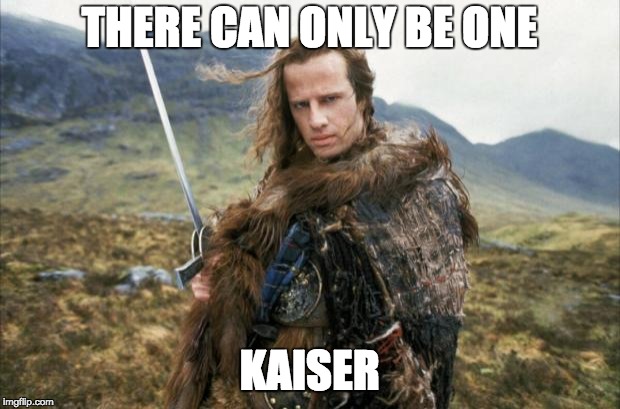 Regaccio said:
StarNaN is boxed in on three sides by members of this coalition. The choice for StarNaN at least in the short term is clear - work with the Kaiser to break down the PLC and the West to his benefit.
Click to expand...

Wouldn't the coalition disband once Kaiser is brought down a peg? If so, would it not be better to join in the spoils (or to make his own spoils in a War of Two Romes)? Not to mention that a growing Byzantium would be a threat to StarNaN's trophy (because let's be honest, nothing else matters). I think that although StarNaN is right not to freak out about Byzantium, his move to feed the Pope when it is so clear that the Kaiser wants Roma in order to contest Byzantium later on seems like the best move.

StarNan has no interest in seeing KJ dead, or else he'll be the strongest and the target of a potential hugbox, without any hope of fiding sympathy in KJ. He better hope they keep fighting while he lays low and grow, as he has been doing last session.
Last edited: Mar 20, 2018
Toggle signature
Back to the forums.

Sfan said:
StarNan has no interest in seeing KJ dead, or else he'll be the stronger and the target of a potential hugbox, without any hope of fiding sympathy in KJ. He better hope they keep fighting while he lays low and grow, as he has been doing last session.
Click to expand...

I agree, for now I think it makes sense for KJ and StarNan to stick together and watch England-France-Spain collapse into inevitable infighting over victory cards. Hungary and Austria can feast on PLC territories while Byz devours the East.

The wingmens' situations puzzle me, though:

POPE: I still don't know what happens in southern Italy and Rome itself, though. Not sure if Austria and Pope have some kind of ride or die arrangement. But where else is Pope supposed to expand if not into Savoy or Naples? North Africa? The New World? Is he content to aim for a runner-up trophy as StarNan's king-making ally?

HUNGARY: The questions about Pope go quintuple for Hungary - where are they supposed to expand after PLC lands, and are they really happy to settle for a prize as best ally?

I thought Hungary was a fool in session one, but after session two... how does that phrase go? "Strive to make oneself necessary"?
Last edited: Mar 20, 2018

Am I the only one who sees the possibility of a Grand Johanic Conspiracy? No doubt under Johan's directions through his sub, England watched safely as the Western Block threw its power into Kaiser Johan's slaughter. Meanwhile, the Kaiser prepares his legions to march on those who brought down the third member of the old team Johan. The Western block gets weaker while the Johans look out for their own... It will be interesting to see how things go down tomorrow.

Regardless of such theories, congrats to the Kaiser for his ingenuity and for giving us all someone to root for by making an early game Ottomans into the scrappy underdog.

I do have to give the Western Block credit for sticking up for their Portuguese and Dutch allies, but time will tell how earnest their intentions are. Speaking of Portugal, hopefully we will be getting an update on Zeke's quest to spread Valfard to the New World next session.

It is inspiring to see the (rather historic) comradery between Lithuania and Poland, hopefully this won't come to a tragic end. No idea what Denmark's angle is here though - he has alienated Sweden and seems to have little to gain from feeding Poland. time will tell.

Meanwhile, poor Groogy gets lumped in with the failure of the coalition. I an hardly imagine his mighty horde showing up and being told to go police the Polish plain. At least they seem to have picked up some new art techniques along the way. Perhaps Groogy will gain a second lease on life by proving his Horde to be the greatest of all next session...

Meanwhile, Austria and the Papal State wait and watch, but who watches the watchers?

Also, kudos to Morocco for their fierce defence of the Maghreb against the Western hordes and to Aragon for their steadfast holdout on their island possessions. I was disappointed that others like Burgundy and Brandenburg didn't stick it out to the bitter end with their original tags, so hopefully your perseverance will be rewarded. With the Kaiser's victories over the west, the moment of your salvation may soon be at hand.

Regardless, looking forward to tomorrow's session!

Edit: Added more accidentally posted before had completed writing
Last edited: Mar 20, 2018
Toggle signature
"The world is a tragedy to those who feel, but a comedy to those that think." - Horace Walpole
“The world is nearly all parcelled out, and what there is left of it is being divided up, conquered and colonised. To think of these stars that you see overhead at night, these vast worlds which we can never reach. I would annex the planets if I could; I often think of that. It makes me sad to see them so clear and yet so far.” - Cecil Rhodes (A Victoria player before Paradox, dreaming of Stellaris)
"Any nation that decides the only way to achieve peace is through peaceful means is a nation that will soon be a piece of another nation." - Richard Milhous Nixon
"The quickest way of ending a war is to lose it" - George Orwell
"Do I not destroy my enemies when I make them my friends?" - Abraham Lincoln
A Tragedy in 10 PAARts: An Amateur's Italian MP AAR (Complete)
The Rise and Fall of Hilter's Reich: Dominican Republic MP Latin American Thunderdome Mini-AAR (Complete)
Duly Elected MP for the Paradox Forums Constituency in the Virtual House of Commons for the June 2020 Chain of Command Devs vs Youtubers Clash.

Oooh, WOW! Europe and the rest of the world, you better be aware, a 10k expedition/token force is about to leave the island and spread fear and destruction all over the place.

Aretii said:
Google translate claims the blurb for Muscovy is "Circle of betrayal and cowardice and deceit."

“Betrayal, cowardice, and deceit everywhere around me” is a famous line from Nicholas II’s diary the next day after his abdication in March 1917.
Toggle signature
I am a proud bearer of The Fourth Cookie for Services to Syndicalism ● and The Grand Service to the Kaiserreich Mod Cookie *
You're new to this negotiating thing, aren't you? It's simple. You beg for mercy and offer me gold, and I say no and take everything you ever loved. And the gold.​
Week 3

It's Tuesday my dudes

(Trin Tragula did not gain 16 provinces AND 16 development last session. I forgot to change the +16 on provinces to +0)
Last edited: Mar 20, 2018
Toggle signature
Hello, I'm omfgBlondie. You may remember me from such videos as Artificial Alliance, and the Patriarch of Ethiopia

So tell me, @KaiserJohan, about the whole Morocco situation...

Will you pull a Muscovy again and stand by idly while the Western Hugbox devours another player, just to proclaim yourself his "avenger" when it is convenient for you, or will you actually do something while it matters this time?

He's at GDC in San Francisco this week.
Toggle signature
Super Mario Land really should have been a turn-based strategy game. All you do is jump and run, and if you don't like doing that you just stand around waiting for something to happen.

Feedback is Dumb and It Doesn't matter (Day[9])
K

Braytn has really increased his dev. It is interesting to see dev and province changes from week to week. Austria is quietly expanding and likely enjoying everyone having their attention diverted away.

dynalon said:
He's at GDC in San Francisco this week.
Click to expand...

Makes sense, Da9l will hopefully be just as entertaining to watch.
R

Austria gave some provincess to the Papal State also, no ?

60% of the stream is Jake and Chris laughing their ass off for something nobody understands while ignoring whats going on in the game...

Chris: Imagine a heavy ship at the Adriatic Sea...