Empire of Sin - My boss character has begun walking very slowly outside of combat. I think it started after combat.

Menu
Install the app
You are using an out of date browser. It may not display this or other websites correctly.
You should upgrade or use an alternative browser.
Empire of Sin 412 Beta Branch forum 13 Suggestions 247 Technical Support 42 Mods Bug Reports 989
O

Short summary of your issue My boss character has begun walking very slowly outside of combat. I think it started after combat.

What platform are you using?
Playstation 4

What OS are you playing on?
Windows

Do you have mods enabled?
No

Have you tried verifying your game files (Steam only)?
No

Please explain how to reproduce the issue

Is there anything else you think could help us identify/replicate the issue?
Upvote 0
C

hover over the character to see what the traits are. Possibly injured or drunk
O 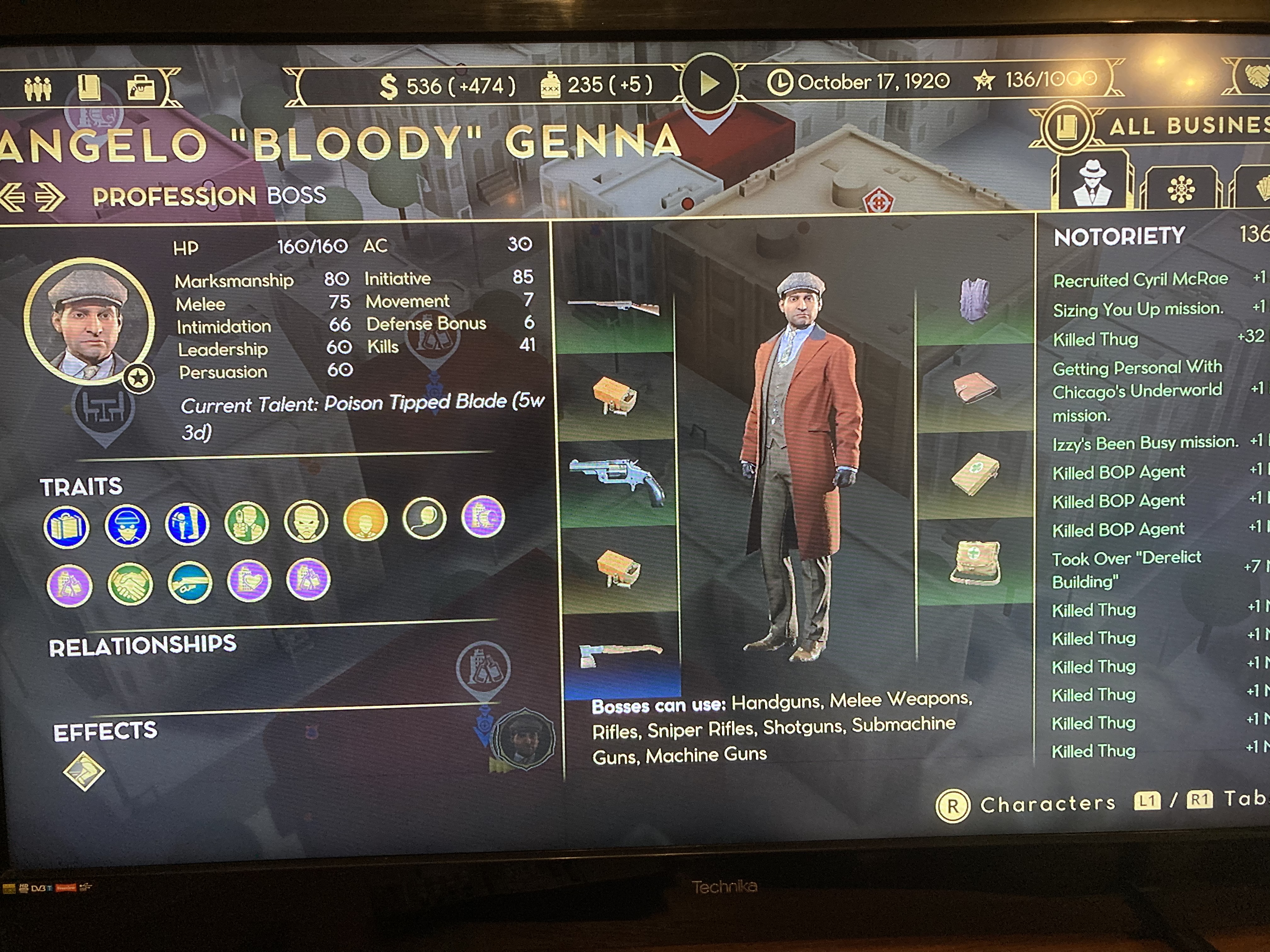 They don’t seem to be, unless I’m missing something. The effect showing is fleet footed (ironically), but the traits don’t seem to suggest anything. Plus it has been going on for several weeks in game. I’ve tried a few of the restorative items, but no change.
M

Same happened to me and also with the same boss. I m playing on switch
Last edited: Dec 8, 2020

I have the same issue. Bau Chai-ung is walking super slow and she is not injured or drunk.
I tried placing her inside a building by herself then took her out but no results.


Edit: now that i have taken a look through her stats she gained a weird "Careful" trait. Is it possible to be because of this?

I expect this is a bug, but there are some workarounds mentioned here:

Probably a button I hit accidently, but now my boss is walking slow everywhere.. I am missing sitdowns... :D

Mankind fears thought as they fear nothing else on earth -- more than ruin -- more even than death .... Thought is subversive and revolutionary, destructive and terrible, thought is merciless to privilege, established institutions, and comfortable habit. Thought looks into the pit of hell and is not afraid. Thought is great and swift and free, the light of the world, and the chief glory of mankind. Bertrand Russell
L

We are looking into this issue so we're interested in the steps you took leading up to when it started. If you can let us know it would aid us in reproducing the issue in-house and getting a fix out for you.

I know it’s been a while but I’m on Xbox and same happened to me recently, reloading after it happened does nothing, before it did fixes it, but not when you load back, i did an auto battle made a safe house and appointed someone else as lieutenant, came out to see him stuck in the ground un-partied him came back and he was above ground but slow, and he gained the careful trait like someone above said. Also the reason I was using auto was because this was a fight against a leader but would just freeze in the getting ready for battle state so I resorted to that.
Last edited: Jun 10, 2021
L

Hey @whitefire517, sorry to hear you've encountered this issue! Have you noticed it occurring since? If you have, could you put this in a new bug report with a video recording if possible? It would be helpful to our coders. Thanks!
D

I've also came across this issue while playing on xbox. I'm playing as Dion O'Banion and I've hired George Moran through the dion missions. Since hiring him, George has always moved slowly everywhere meaning in combat outside of a building, he's not involved.
Show hidden low quality content
You must log in or register to reply here.
Share:
Facebook Twitter Reddit Tumblr WhatsApp Share Link
Top Bottom