Empire mode at its most broken

Jump to latest Follow Reply
Menu
Install the app
You are using an out of date browser. It may not display this or other websites correctly.
You should upgrade or use an alternative browser.
Age of Wonders: Planetfall 1564 Bug reports 1581 Suggestions 532 User Mods 85 AoW: Planetfall: News and Updates Archive 41 Multiplayer 53

Last few games, I went through empire mode again, and tried to win as fast as I possibly could. I started with the one-city challenge, but made it a playstyle. It was insane. I won in 50 turns, but that was only because the opponent was on the exact opposite side of the map. I bet you can typically hammer it out in 30-40 turns on most maps, even with 4 opponents.

Sup fellas, I wanted to show you an alternative way to play on Empire mode, which is a dramatically different playstyle than normal. It surprised me, so I wanted to share it. So I started on a 'defeat the allied commanders,' map here: And I...

I took this and refined it as far as I think I could. Here is what I found:

Race: Syndicate (the extra doctrine slot is huge. Assembly can do this almost as well. The others are not as good because of the challenges with the doctrines.)
Secret tech: Celestian (for Deny the wicked hero skill)
Hero abilities: Support Pilot, Star Union Scholar (for the extra landmark drops)

Note here is what I took as operations and units:

There is no better, as far as I can tell, for this playstyle.

World conditions: you must have "ghost bustin'," and cannot have "perfect storm" up. Past that, crank up all difficulties as high as you possibly can. You will want the extra enemy units when you fight them, so the more, the better. Here is the first I found:

When you hit the ground, it doesn't matter what terrain is around you, or what your landmark is, everything will always work out, guaranteed. So the last time I landed, it was here:

This drop was good for the research, and psi-fish evolution, but not ideal. Money is way better. It doesn't matter though, I have never found a setup that I couldn't do what I am about to.

Here is what you do:

1. Get battlefield autopsies up - I try to play with "ghost bustin'," so I just need to get one pickup to get the requisite renown. There is always something I can hit on turn 1, either with my main stack, or with one of my two scouts. Always the first priority.

2. Get 'Deny the wicked' up - Deny the wicked is the Celestian primary defense setup. It reduces all damage by two, on top of all other defensive mods, from anyone with soulburn. All you have to do is typically mod the lightbringer. Since he is out front, it is typically the only target for the entire other side, and saves everyone: 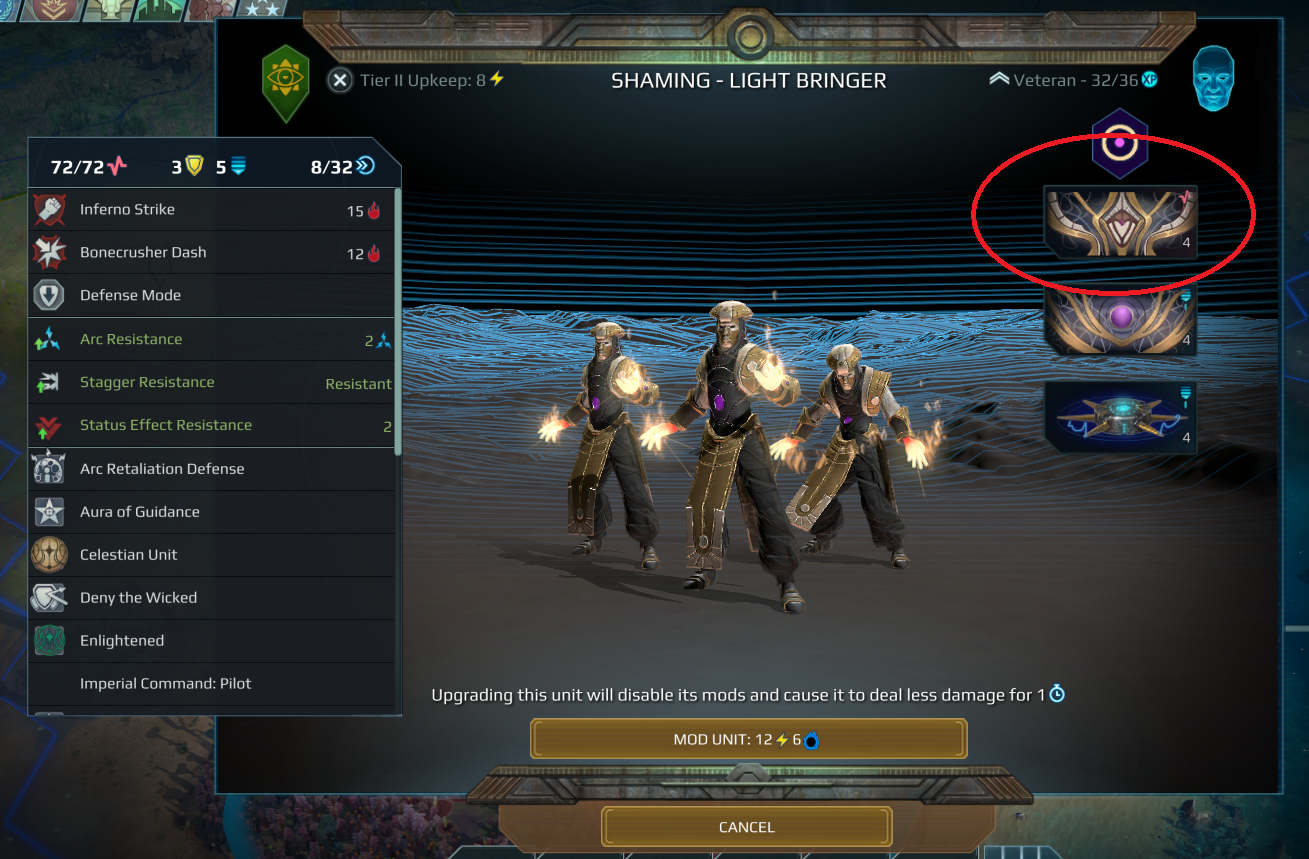 This setup is almost early-game god-mode. Eventually you will need to get all 4 units Shield of Remorse, but that is it. DO NOT MOD FURTHER. The Light Bringer is this, and everyone else is Level 1 Shield of Remorse, and that is all they get, ever.

3. Pick the most combat-filled path to the first quest. Here I couldn't do it because that is a Paragon landmark, and I was at war with them. Accordingly, I just took it. In most cases though, just head toward the quest, hitting everything you can on the way. 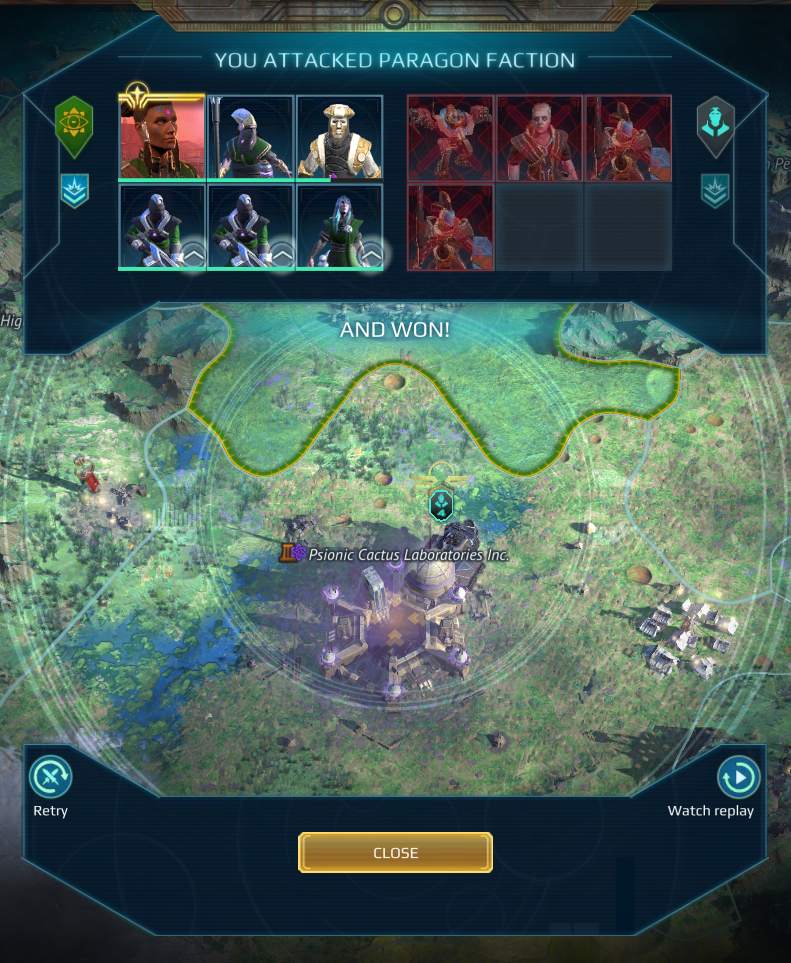 4. Pick the most combat-filled path to the first Heritor exploration site. Almost all heritor sites reward you with 200+ research. You need this to finish out the level 1 and 2 techs. Here is what I got: 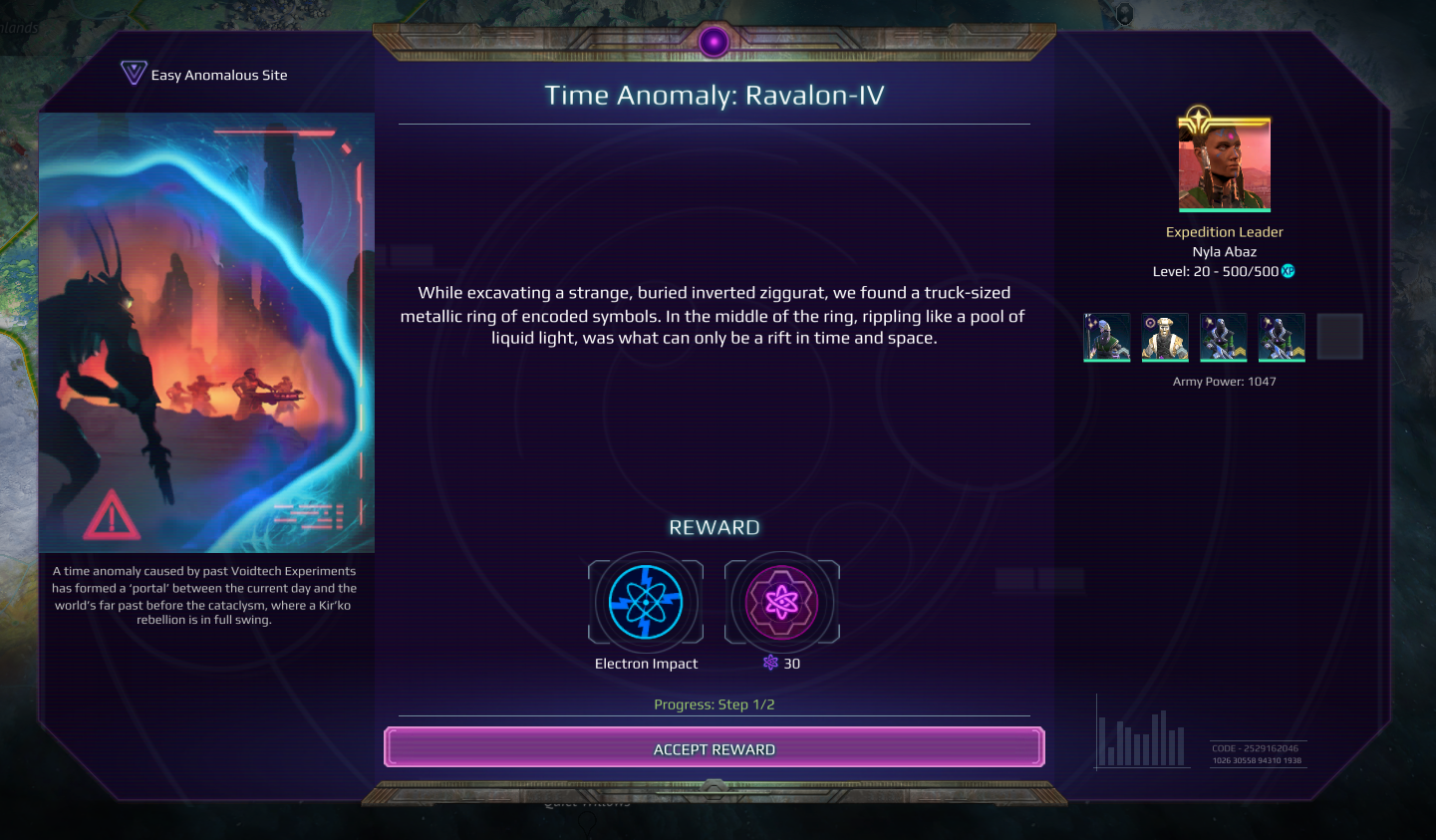 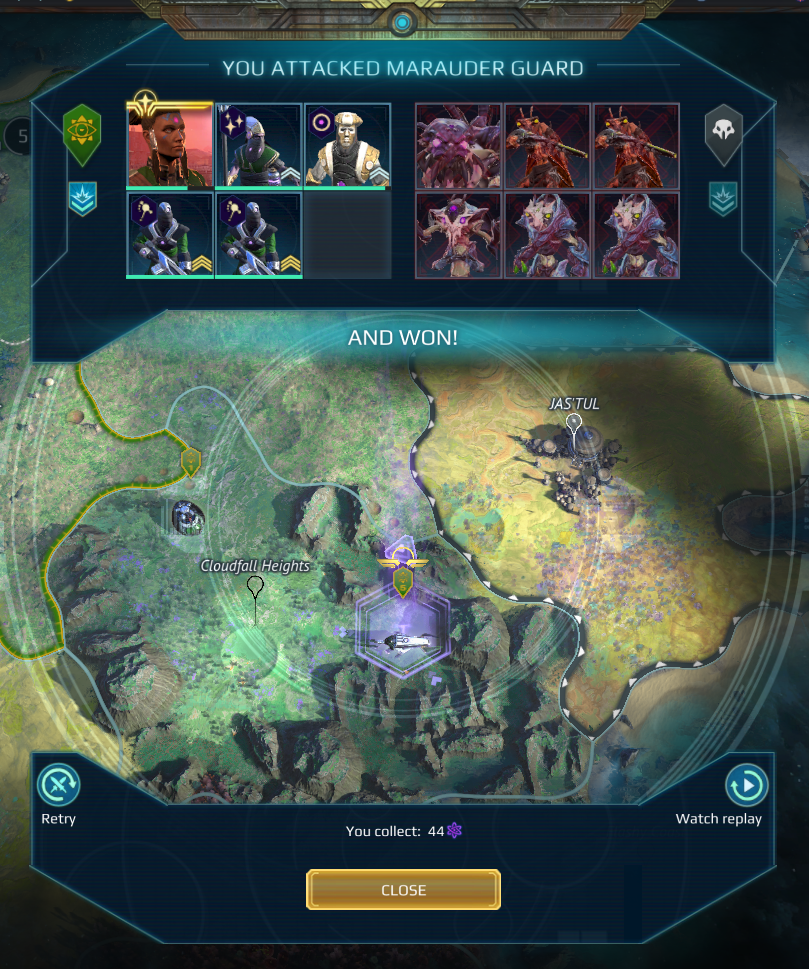 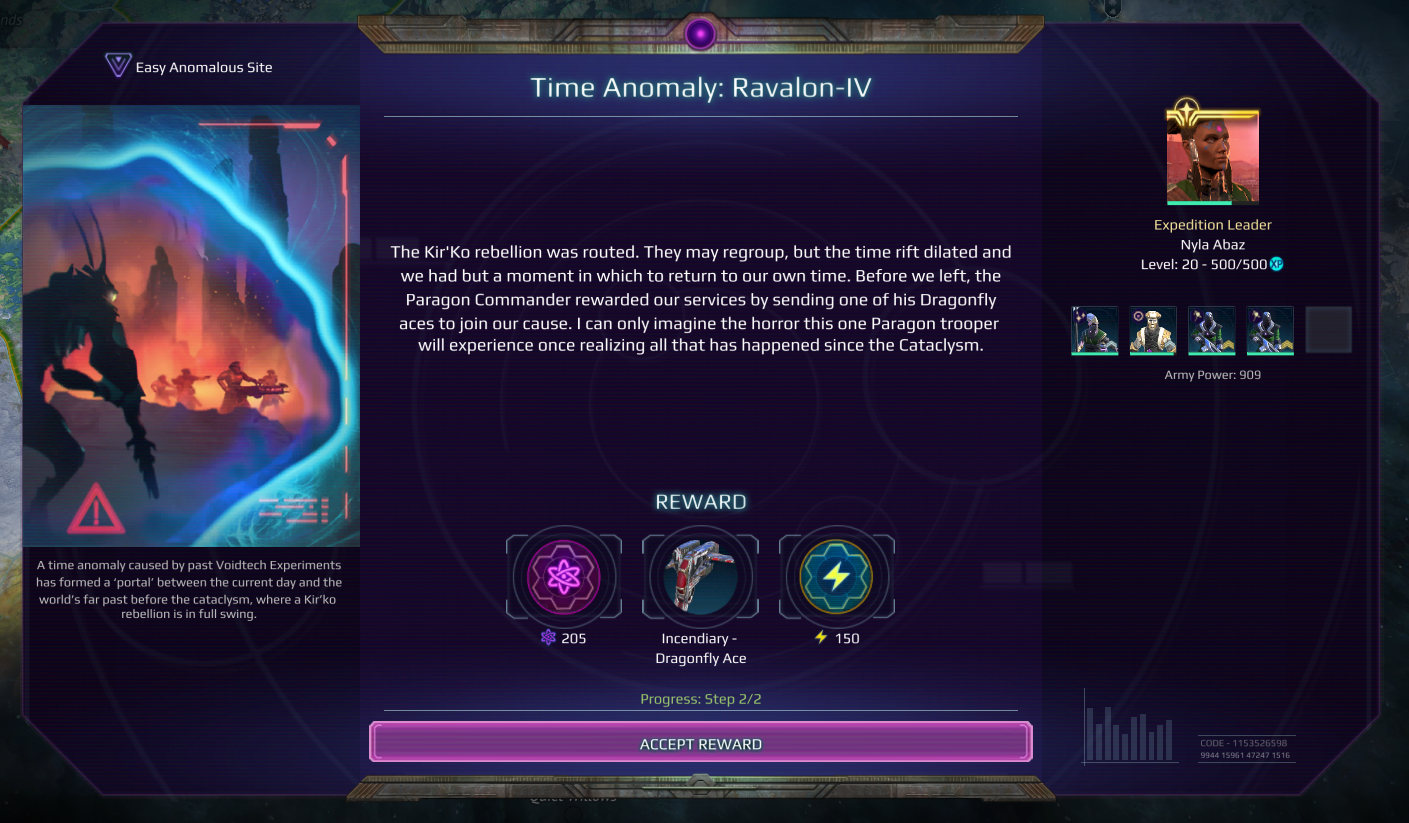 5. Get the operations up. Pick up everything, kill everything, and take out anyone, that stands between you and the requisite renown. Your starting stack, plus whatever you can get, should be enough to do this:

6. Get 4 psi-fish hunters ASAP. Get that energy efficient assembly line (or whatever) up and running, then buy 4 psi-fish. That is all you need. I got them on turn 10:

7. Disband the starting army. Yep, disband everything. All 4, even if they are modded, or experienced. You will need the 24 energy per turn.

8. Use the mobility, and kill everything, everywhere. Typically around turn 10, the hunters (with energy efficient assembly line, my starting hero, and one new hero, are rolling together. That stack can kill anything currently in the game. Take the hardest paths to the landmarks, and kill everything. NEVER let anything surrender, always chase it down, and NEVER let a combat slide past you, if you can help it. That is huge money, and you can do 3 or 4 of these fights PER STACK, PER TURN:

9. Split your stacks and do it with both. Your city should be able to produce capable units, so build stack 2, and get it in the field:

10. Wait for your city to hit population 24. The second your city hits 24, or close to it, then invade everyone, everywhere. My city was basically as good as it was going to get at 20, because it had cosmite stabilization, and energy efficient assembly line at level 5:

This was a terrible setup, but no matter what, it is sufficient. Anyways, focus on fielding the third army, one that is basically unkillable. And when I say unkillable, that is no joke:

Get those units to look like this, and you don't need virtually anything else:

Boom, that is it, no stress, super fast. I had to walk all the way to the opposite side of the world, but there it is:

Started about 9:00, had food, cleaned up, took a billion screenshots, and ended at 1:30. Easy mode. 3 hours should be completely doable by anyone. Completed all objectives. That will give a gargantuan amount of XP. Fastest way to level I think there is. Anyway, that is the most absurd build I have ever played. Anyone have a faster build? I would like to see it. This is the absolute fastest I think you can do it.