Jump to latest Follow Reply
Menu
Install the app
You are using an out of date browser. It may not display this or other websites correctly.
You should upgrade or use an alternative browser.
Threadmarks
Reader mode
Prolouge

A/N: Welcome to my first Ireland AAR, one that I will do in the Kaiserreich universe.

This is based off one of my save files in Hearts of Iron 4, and with the Kaiserreich mod still not updated to be compatible with the new DLC, I'm just running off my head for what I achieved in that run, and adding my own touch to it.

Do read and enjoy, but please no flame wars.

P.S. I meant to post this on the AAR forum, but accidentally posted it as a blog instead. ;P

Even then, people wondered if the Emerald Isle were to ever see the light at the end of the tunnel, if they would ever see a newly independent Ireland that could cast off the British yoke, so that Ireland may once again take control of her own destiny.

And as we have all learnt since time immemorial, nothing stays the same in the world, no matter how much people may want to defend the status quo.

The Easter uprising of 1918, though a failure, served to prove to the Irish people - as other failed uprisings in history did - that the British cared not for the well-being of the Irish. The rebels were executed, made martyrs of their cause, and innocent Irish civilians died at their hands as well, children included.

We owe Germany for supplying us the guns needed in our fight for independence, but guns are mere tools, useless lest they are wielded by soldiers. And it was the soldiers, our soldiers, the soldiers of Ireland, that used them to deadly effect and repelled the numerically superior British army.

And thanks to the efforts of those brave soldiers and the support of the Irish people, we stand an independent, sovereign country once again: the Republic of Ireland!

Yet we cannot rest on our laurels, for there is much work to be done; our agricultural, military and economic sectors are in various states of neglect and in dire need of reforms, and Black Monday has struck our country, just as it has struck the rest of Europe and much of the world over. Britain under Oswald Mosley has grown increasingly militaristic, even to the point of threatening Ireland's sovereignty, and the Kaiserreich is in direct danger of invasion by the Syndicalist alliance in Europe.

-Michael Collins, in a nationwide address to Ireland, circa 1936


Prolouge​
Michael Collins sat brooding on his chair, his mind shifting through the various tasks on hand that needed to be resolved.

For a decade since Ireland's independence, Michael Collins had retreated from public life and politics, having had to settle internal family matters. Yet now he returned from his exile in 1936, amidst a time of uncertainty.

For ten years no serious improvement was made to any sector of Ireland's state apparatus since Ireland's independence from Britain; much of Ireland's infrastructure was in serious disrepair, its economy was backward and sluggish - only trade with Germany keeping the country afloat, and its military was ill-equipped and small in size.

Moreover, through Collins's connections with various businessmen in Germany, he discovered that with a stock market bubble developing in Germany, it was only a matter of time before it burst, sending the economies of countries in the German trade sphere - most especially Ireland's - into free fall. 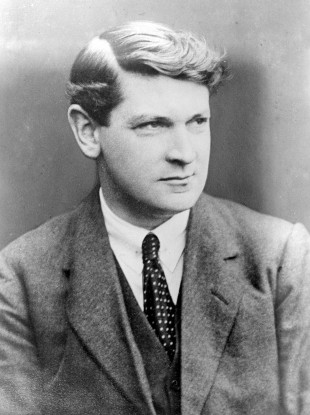 Michael Collins, current ruling President of Ireland, father and saviour of the Emerald Isle.​
Collins knew what needed to be done; paging his secretary and telling her to call in all the important figures in the Irish government and military, he did not have to wait long before they arrived at his behest.

Tom Barry, decorated veteran of the Irish War for Independence and Chief of Staff of the Irish Republican Army (IRA).

And finally, a man Collins himself despised on a personal level but committed to the survival of Ireland as a nation, Eoin O'Duffy, current serving Taoiseach of Ireland.

As all of them took a seat at the table in the meeting room, it was Gearóid who spoke first, "Ceannaire, are you aware of the recent waves of protests in Belfast?"

Ah yes, Belfast, provincial capital of the state of Ulster in the north of Ireland, a hotbed of resentment and anger harboured by the Unionists towards the Fine Gael party - the current rulling political party in Ireland - for having forcibly caused their separation from the now defunct United Kingdom and their joining with the Catholic-predominant Irish Republic.

He honestly wondered why those people still wished separation from the Irish Republic; did they not know that the British had abandoned them, even though the majority of the inhabitants shared a common ancestry with them as a result of the settlers moving there, that it would be better for them to stay united with the rest of Ireland in these uncertain times?

Though perhaps given the overall tension between the Catholics and Protestants in the country, it did not seem so baffling they would continually oppose the government for over a decade.

"Then why not we just send in the troops and disperse them? That ought to teach them a lesson," Eoin suggested, much to the chagrin of Collins.

"And if we do that, we'll only worsen the situation there and give the Unionists even more reason to cause trouble," Collins harshly retorted, "Worst case scenario, every Catholic home in Ulster will be targets for Protestant mobs and bombings, and we can't afford that level of internal crisis, not with the state of Ireland as it is."

Eoin grunted but sat back down, conceding the point.

"Ernest, what are our options for improving the Irish economy?" Asked Collins.

"From what I have studied, multiple," Ernest replied, "The most important sector in immediate need of reform, however, is our agricultural sector. Many farmers are reliant on manual labour for doing farm work, and they're not as productive and efficient as farmers in other European countries or in some parts of the Americas. Moreover, some do not have access to steady supplies of clean, fresh water."

Collins nodded; food and water were the two most vital things needed for people's survival.

"If possible, I might also need to ask for new rifles for the IRA," Said Tom Barry, "The rifles we have date back to the first Weltkrieg, and there's not enough of them to go around for every one of my boys. Moreover, we need to strengthen the military; our army's just a pitiful five thousand or so, and we're completely lacking any Navy or Air Force to support them."

"If I may, President Collins," Said Eoin, slightly irritating the President, "I believe we also need to begin connecting the whole of Ireland through railroads."

"The issue here, however, is our budget," Stated Ernest, "If we're not careful with our spending, we'll be bankrupt before we can complete the necessary reforms."

"Right now, I'm less concerned with how much money we can spend than how we can put it to good use," Said Collins, "Borrow more money if we must; Ireland's future is in our hands, and it's our duty to make it a brighter one."

The discussions went on for a few more days, but soon, the groundwork was laid out for Ireland's revival, And on the 21st January, 1936, the Irish Economic Advancement Act (IEEA) was implemented.

It would yet be longer before the effects of the IEEA could be felt, but already work began on numerous projects and other efforts at reformation of the Irish economy; farmers ploughed and harvested their fields with tractors, factories sprung up in all four states of Ireland, granting massive employment to jobless Irish, and new homes were being built.

To broaden the Irish economy, industries of all kinds vital to Ireland sprung up, producing all sorts of materials and consumer goods; cement, textiles, canned foods, cars, whatever could help boost the economy. 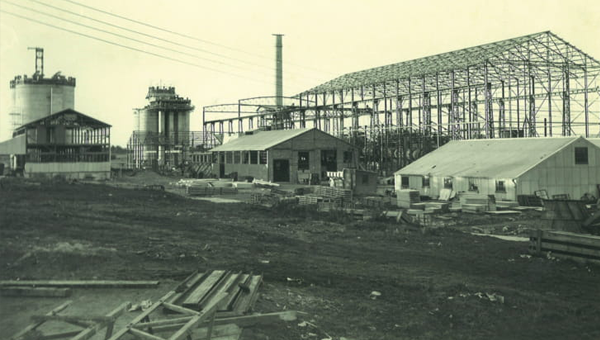 An Irish cement factory, one of many churning out concrete for the Construction industry.​

Other ambitious projects were also underway, one of the most notable being the construction of the TransÉireann Railway. 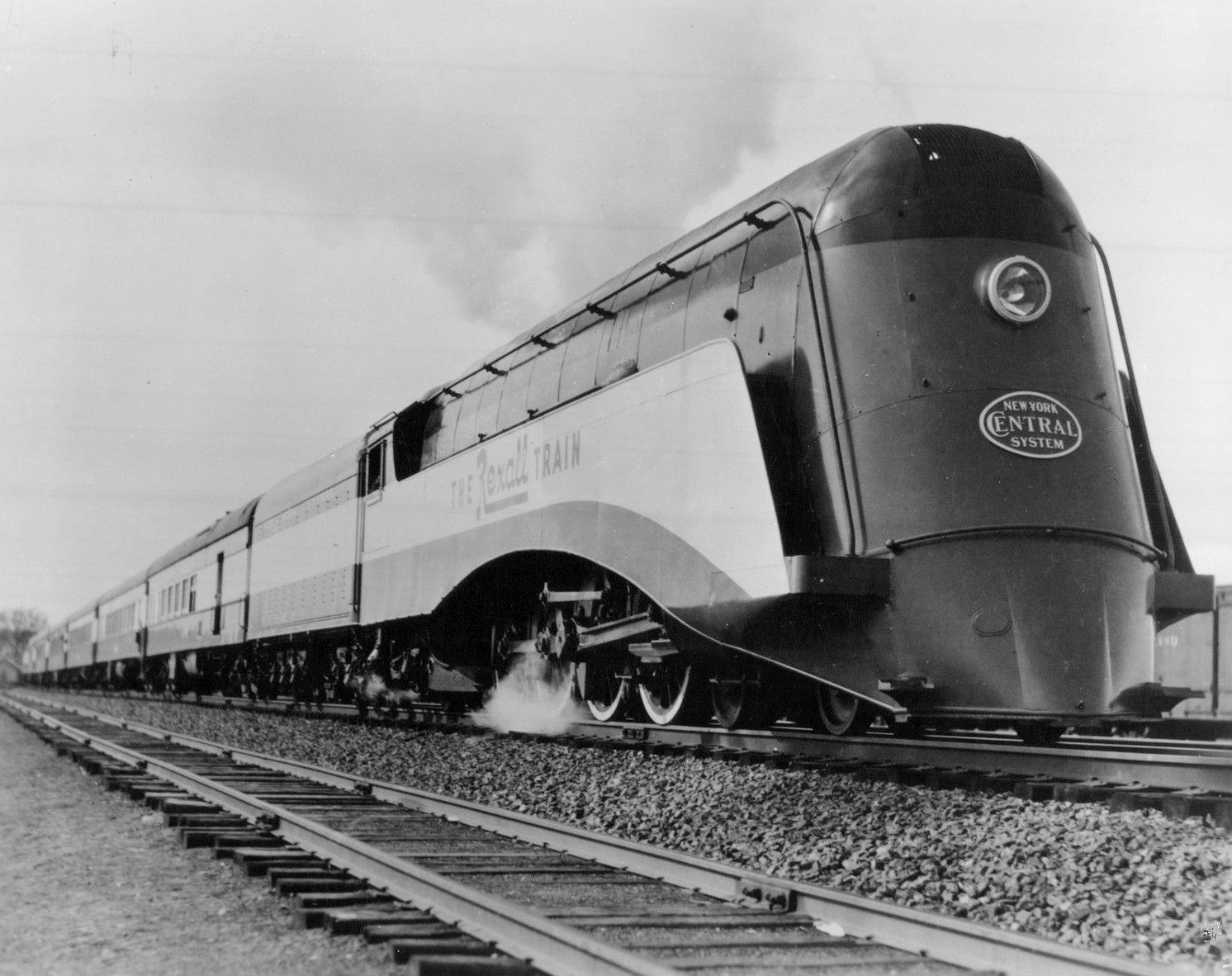 One of several trains in service on the TransEirean railway, the model copied directly from that of other trains working in the United States of America.​
Of course, it was vital that a budget be secured for such an expensive undertaking, and so the National Industrial Investment Fund was implemented, providing a steady source of funding for these projects.

Collins knew that it could not be sustained forever unless they soon started gaining a surplus, but for now it would do. What else would happen in the meantime time would tell, and only God knew what else could happen in the near future.

For now, Collins could only sigh and wait; the groundwork was laid down, time would tell if their efforts bore fruit.
Toggle signature
In the name of God and Ethiopia, we charge forth to rid our land of foreign invaders! Fight with me, countrymen! Fight with me, sons and daughters of Ethiopia!

Will follow with interest.
Toggle signature
Check out March of the Eagle, an iAAR set in 19th century Prussia!

Best of luck to Ireland

Lots of hard work ahead.
Toggle signature
To view is human, to comment is divine.
"Be not afraid" - John Paul II
"The Christian way has not been tried and found wanting, it has been found to be hard and left untried" - GK Chesterton.
Current AAR: The Thorn of the Rose HoI4 The Future of the Red Lion Stellaris (on hold) Journal of the Silver Daggers Battletech
Completed AAR: In Memory of France EU2 Pax Humanitas Stellaris 1.4.1 A VictoriAARn Education Victoria II 3.2
The Great Trial Stellaris 1.9.1A Game for Lisan: Belgium EU4 1.25 Account of RCAF Bomber Command HoI4
Other AAR: Entering the First Court - Kanem Bornu EU4 1.22
View my full AAR list at The Inkwell Red Special Cookie ●
This line is necessary since the forum re-work to enable the links in the last line to be used.

subbed
Toggle signature
'The North remembers... The North knows no king, but the King in the North whose name is Stark'