I call it the
"The No Alloy Foundries Early Conquest Big Fleet"-Build
or TNAFECBFB for short. This means love in blorg.

Preamble
In Stellaris, to build up a big fleet fast, you need quite a lot:
Happily, by trading with xenos, you can skip part 1, 2, 3 and optionally 4 (if you only trade food) completely, leaving you only with the simple task of growing food and mining minerals.

How do I do it?
The way to accomplish this is by setting up monthly trade agreements, exchanging Food/Minerals for Alloys at a 4:1 ratio.
In the beginning, nearly all Xenos will trade with you at that rate or even better.
More details here: Early game boost with monthly trades

How good is a 4:1 ratio?
A 4:1 ratio is equivalent to trading on the internal market with a fee of 0%. This is already great since this allows you a lot of flexibility, but you can actually make a profit from those trades, if e.g. your race specializes in mining. And it's VERY easy to increase mining/farming income!
For example: Build a district.

But what if I don't have anyone to trade with?
Well, usually exploring with several science vessels will help. And I mean EXPLORING, not surveying (but you do that, too, of course).
But instead we simply pick the Hegemon origin.

Why Hegemon?
As a hegemon, you start out as the head of a federation, meaning you get two instant trading partners that won't say no to a trade.
Initially, both will only trade 5 alloys for about 20 food/minerals per month each, which you can easily afford if your empire has some bonuses to that end.
This means that you effectively start with nearly 3 alloy factories!

What do I do with all those alloys so early?
Take over the world, of course! But that's nothing, it gets even better!
For one, there are even more alloy income sources in the form of other friendly xeno empires. If your basic resource production allows it, you can easily reach a +50 alloy income within a few years. Put those alloys to use and expand and build science vessels for surveying and exploration.
And build bastions at chokepoints to future enemies.

Also, since you get alloys from your hegemony buddies, you actually don't need your initial foundry anymore!
So scrap it and build something userful in it's place; like a Research Lab.

I can't expand! Too few influence points!
If you went the research-lab-route, then you have a good chance to get a good influence income by deciphering the language of newly encountered xenos. Around 40-80 per language, I think. But you have to research it earlier than they do! Otherwise you get no points and your research is wasted.
Thus it's advisable so crank up your science game before you send out your scouts. And you might want to halt your explorers every time you encounter a new empire. Sadly, this adds a bit of micromanagement.

But I want Conquest! I can't build enough ships if I expand!
The nice thing about the Hegemony is, that your two friends send you federation ships every couple of months until the federation fleet cap is reached (the cap starts out at 8, but will grow much larger over a couple of years). And that's nice, but 8 more ships won't win you a war on Grand Admiral difficulty level. Heck, even 20 federation ships are not enough!

Solution: You retrofit the federation corvettes into ships for YOUR OWN private fleet!
Cost: 1 Alloy

Yup, you just got yourself a standard corvette for 1 alloy.
And since your friends see that the depleted federation fleet desperately needs reinforcements, they'll do their hegemonic duty and donate new ships every couple of months.

Alternatively, you can just retrofit the fed ships to an empty hulk - kinda like what most people do with their starting corvettes - earning you about 44 alloys for each ship.
You then either park the stripped ships for later retrofitting - or you just scrap them. They DO cost upkeep, after all.
Your allies will always make new ones.

Ok, but what is the actual build?

The optional ethic points are entirely up to you. There is plenty of wiggle room for variations.
I love Agrarian Idyll because it allows you to ignore amenity buildings and gives a big farming bonus.
Aristocratic Elite is great because of the Noble Estates building, which gives you 1 noble job that increases stability by 5 and unity by 3.
Technocracy is great for getting your research really going, which will increase your chance to gain influence by language deciphering.

Warning!
You need to keep a stockpile of the resources you are trading away. If you don't have enough to satisfy your trade agreements out of your stockpile, the agreement is cancelled. You can re-negotiate the trade, but you might get worse rates.

So, how powerful is this build in single- and multi-player?
Multiplayer?
No idea. Abusing the hegemony like this will probably get you banned anyway.
And the favorable trades only work with AI empires, so you are likely stuck with your hegemon-buddies (which is still a guaranteed +10 alloy income right from the start).
Single player?
I went to war with a Dreaded Assimilator in 2208 and won (Grand Admiral difficulty).
And I'm not even remotely good with rush builds.
And since this isn't a rush build, I was colonizing, exploring, expanding and teching up while building up a fleet equivalent in power to the cheating AI empires. And I had two allies to back me up in that war.
Yeah it's kinda powerful.

TL;DR
Using this build, you will amass an armada basically for free, while still having ridiculously high alloy income AND a huge tech or unity lead ... AND you'll still have a stable economy on top of that.
Last edited: Oct 10, 2020
Expand signature
Tips'n'tricks: Easy early game conquests - Gain Influence with Intelligence - Alloys without Foundries - Early Megacorp tech boost on a budget - Gene clinics worth it? - Lithoid Rapid Breeders
Reactions:

Found a nice variation on that exploitative build:

Criminal Syndicates suck.
Early game, the costs of setting up a branch office are crippling (1000 energy, 50 influence) and they only increase with distance.
Other empires can get rid of crime way too easy. And the economic drawback they get from turning their society into a police state is completely negated by their rampant cheating.
In my opinion, crime needs a complete rework. Just model it after the USA: Massive police force, massive corruption, rampant corporate crimes.
If anything, building enforcers should counter stability loss caused by crime, but not eliminate crime completely.

Anyway, using this build you can finally give crime a shot:

You start out as a hegemon with an army of envoys. Put one each on your allies and the other 4 on the federation. Keep your friends happy and gain a federation level within 10 years.
Immediately set up monthly food trades for ENERGY, not alloys.
You'll get enough alloys by refitting federation ships. For the first couple of years, scrap all the refitted ships, so you don't have to pay upkeep.
Build mining and agricultural districts, secure yourself a bit of space where you can expand out to, maybe even colonize a planet.
Reserve 100 influence for the next part, where you open branch offices on both your allies home planets.
Put Illicit Research Labs on their homeworlds. They cost 800 minerals each and take 480 days to build, but they provide you with +6 research to all branches of science.

Once that's done, fill your building slots on your own planet. I suggest more research labs.
With a solid research advantage, by about 2205 you should finally start scouting and decipher languages for influence boosts ... and to find more customers.


Just to give you can idea how Criminal Syndicates could perform if they were actually viable with normal means: 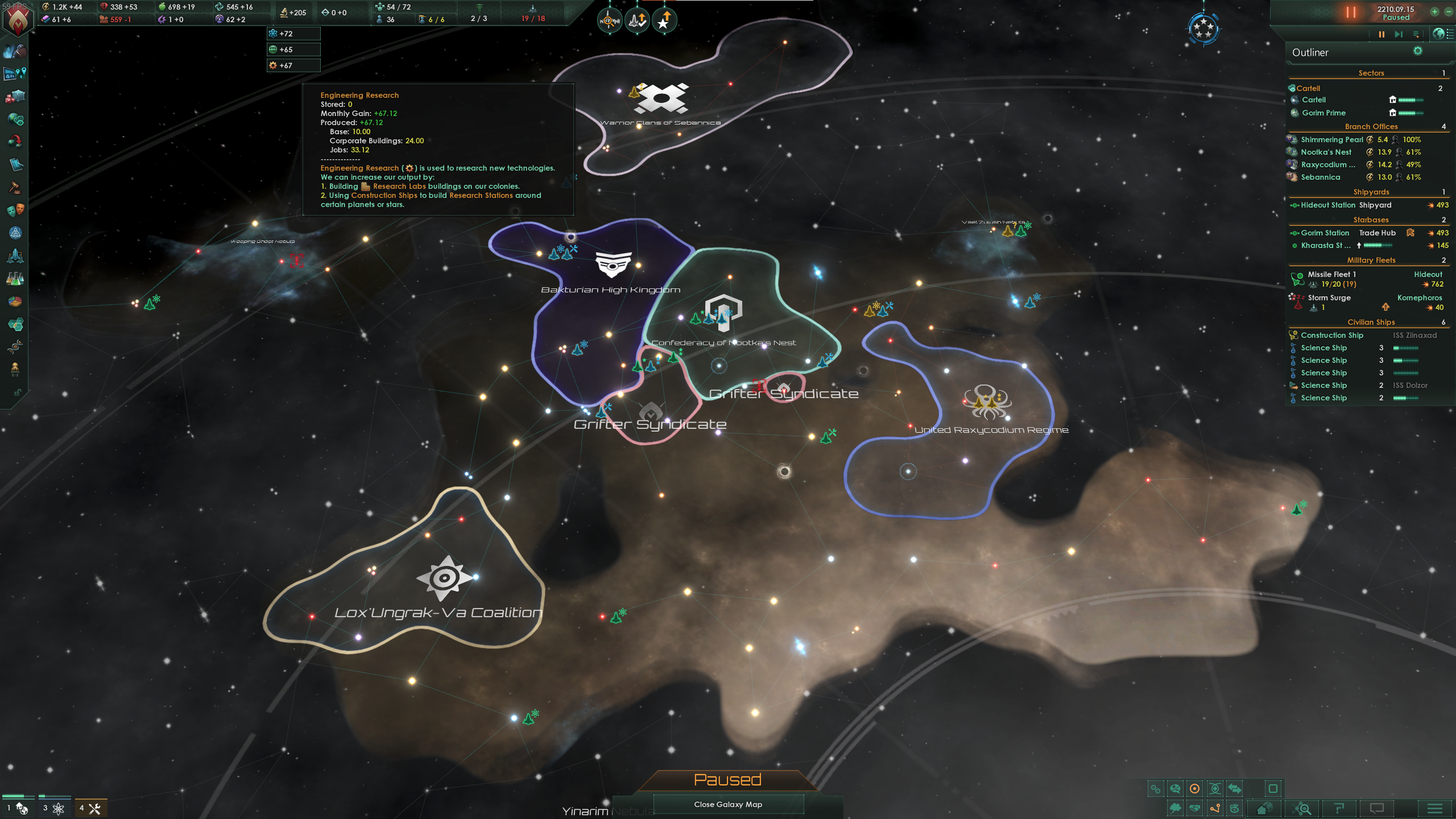 By 2210 I established branch offices on four empires' home planets and built an Ilicit Science Lab there.
Together they earn me an energy revenue of 43.77 and 24/24/24 research while costing me a 12 energy upkeep.