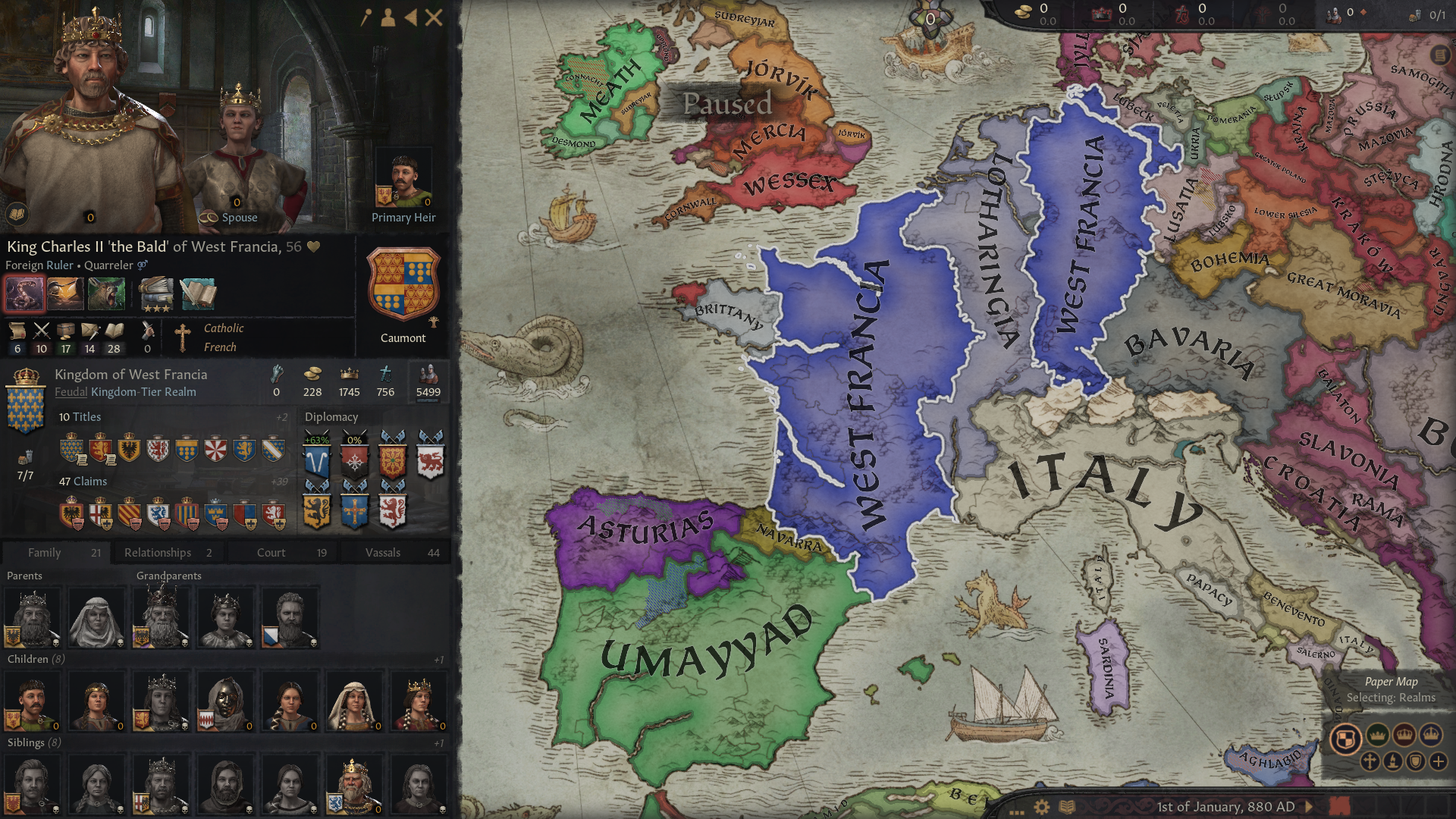 "Let's talk about the most important event of the 870s. As you can see on this map, King Charles the Bald of West Francia conquered the lands in the Kingdom of East Francia that were held by his brother Ludwig the German." The history teacher told her class. "After this victory, Charles established a new dynasty that we know as the Caumonts. Nonetheless, all was not lost for the defeated Ludwig as he was still the King of Bavaria."
Last edited: Jan 21, 2021
Reactions:

Welcome everyone to this new AAR. Inspired by various other observer-mode AARs in the past that have graced these forums, I planned to an AI Only megacampaign AAR myself.

I will be marking down important events of each decade. Sometimes there might be only one such case (like now) but at other times, there might be more stuff. Stay tuned. 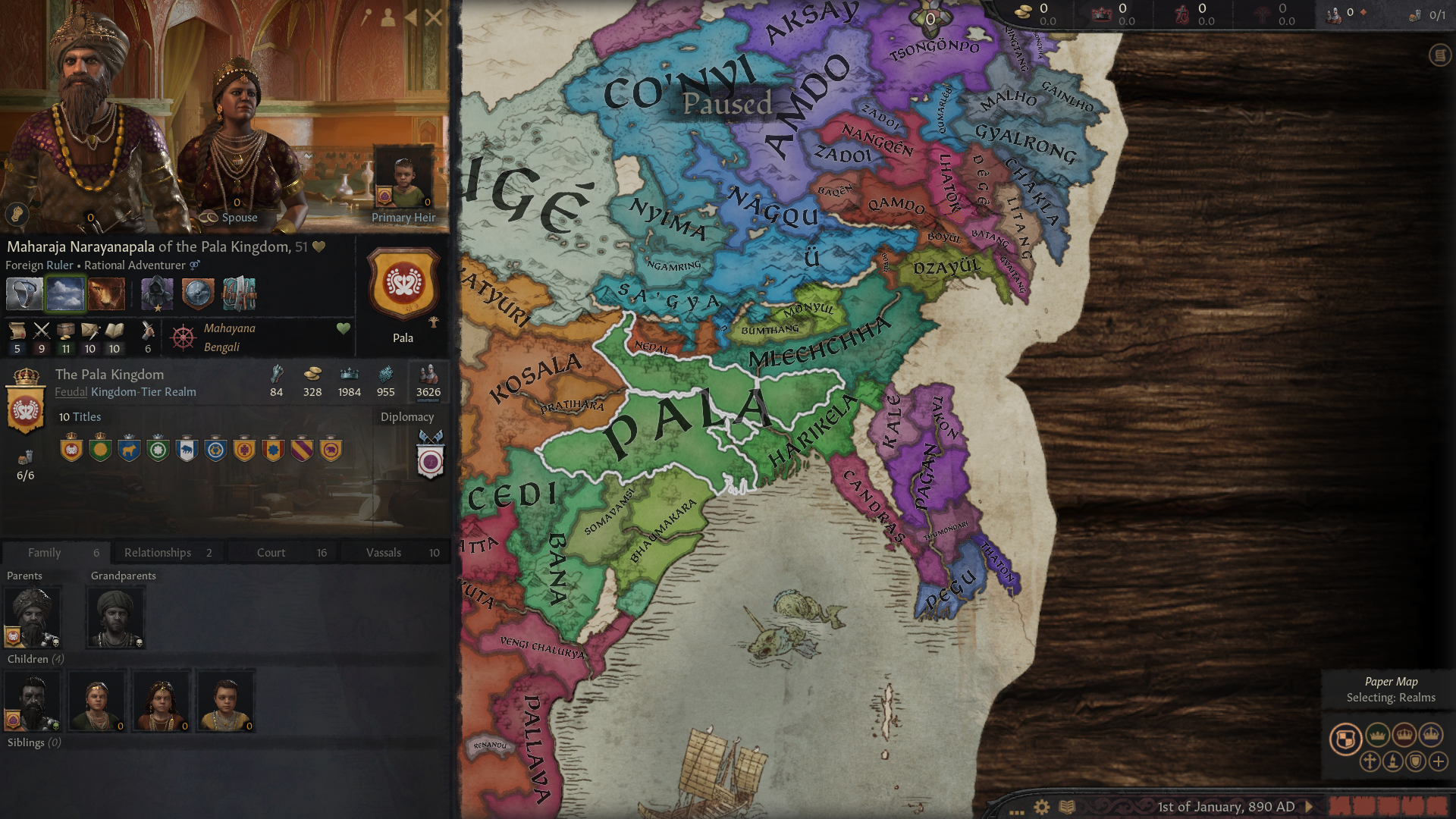 "The Indian subcontinent had been in a Tripartite Struggle between the Hindu Pratiharas, the Buddhist Palas and the Jain Rashtrakutas. During the 880s, the Pratihara and the Rashtrakuta realms both fragmented between the grandchildren of former rulers. The Palas were now the undisputed great power in the subcontinent and they immediately took advantage of their new position to expand north into Nepal." 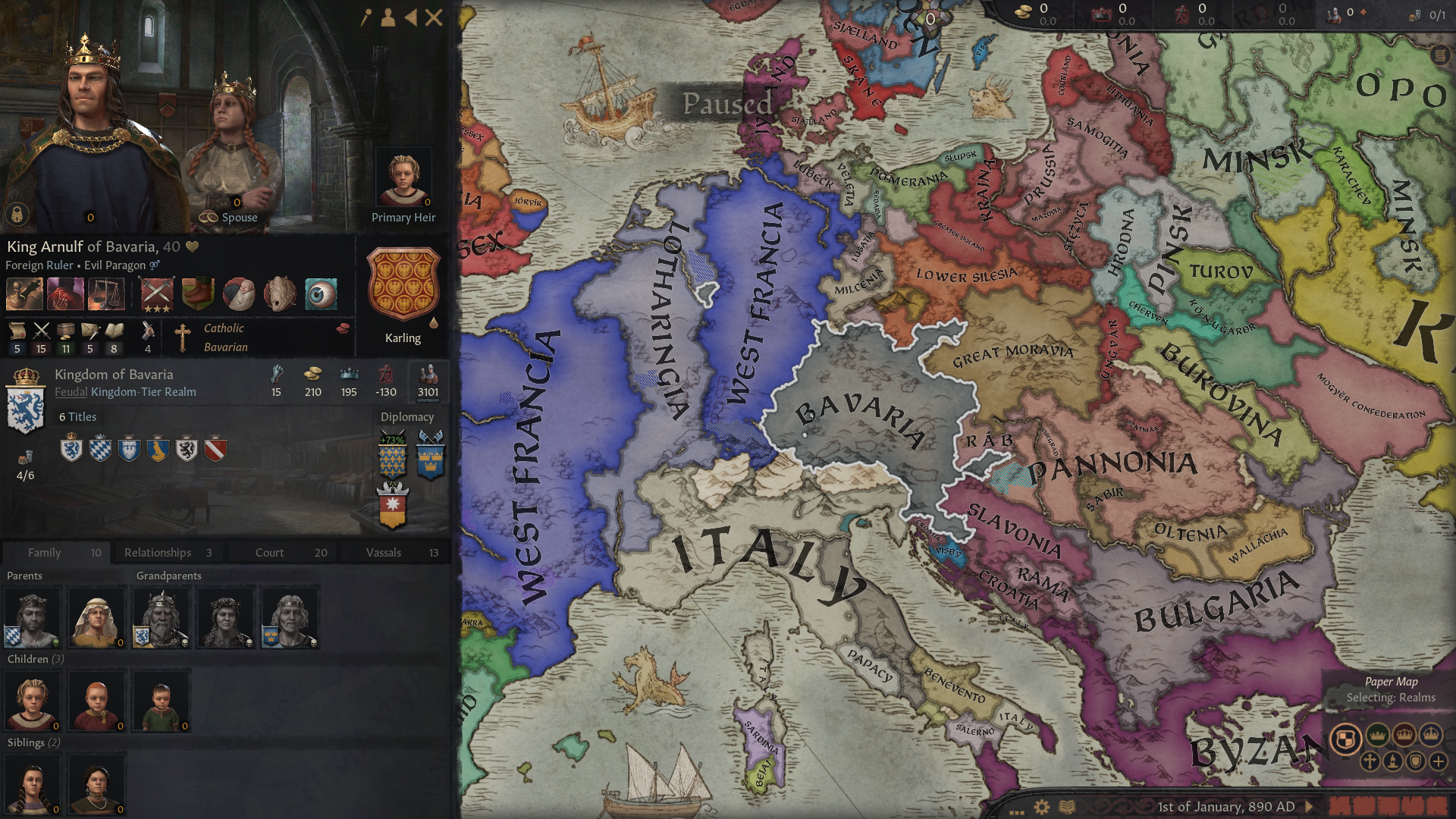 "After the death of Ludwig the German, his grandson Arnulf became the new King of Bavaria. His reign started with a defensive war against King Charles the Bald of West Francia. Luck was on Arnulf's side as King Lothaire II of Lotharingia declared war against Charles. With the army of West Francia busy fighting Lotharingia and her allies from Italy, Pannonia and Brittany; Arnulf was destined to win this defensive war." 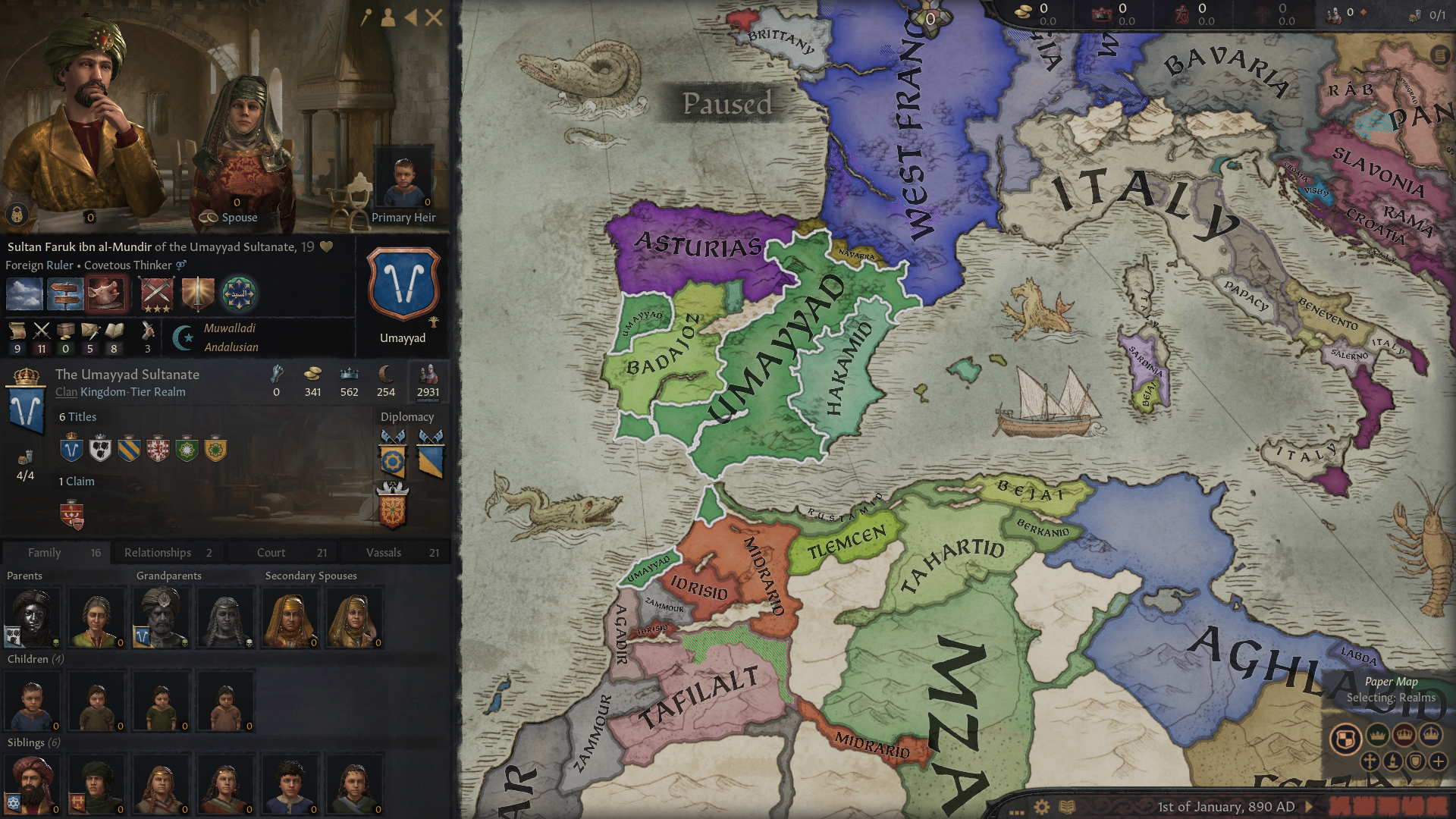 "The Pratiharas and the Rashtrakutas were not the only important kingdoms of the era to fragment. The Umayyads, defeated in war by Asturias and her allies from West Francia, split into three separate states."

There goes my home country Nepal 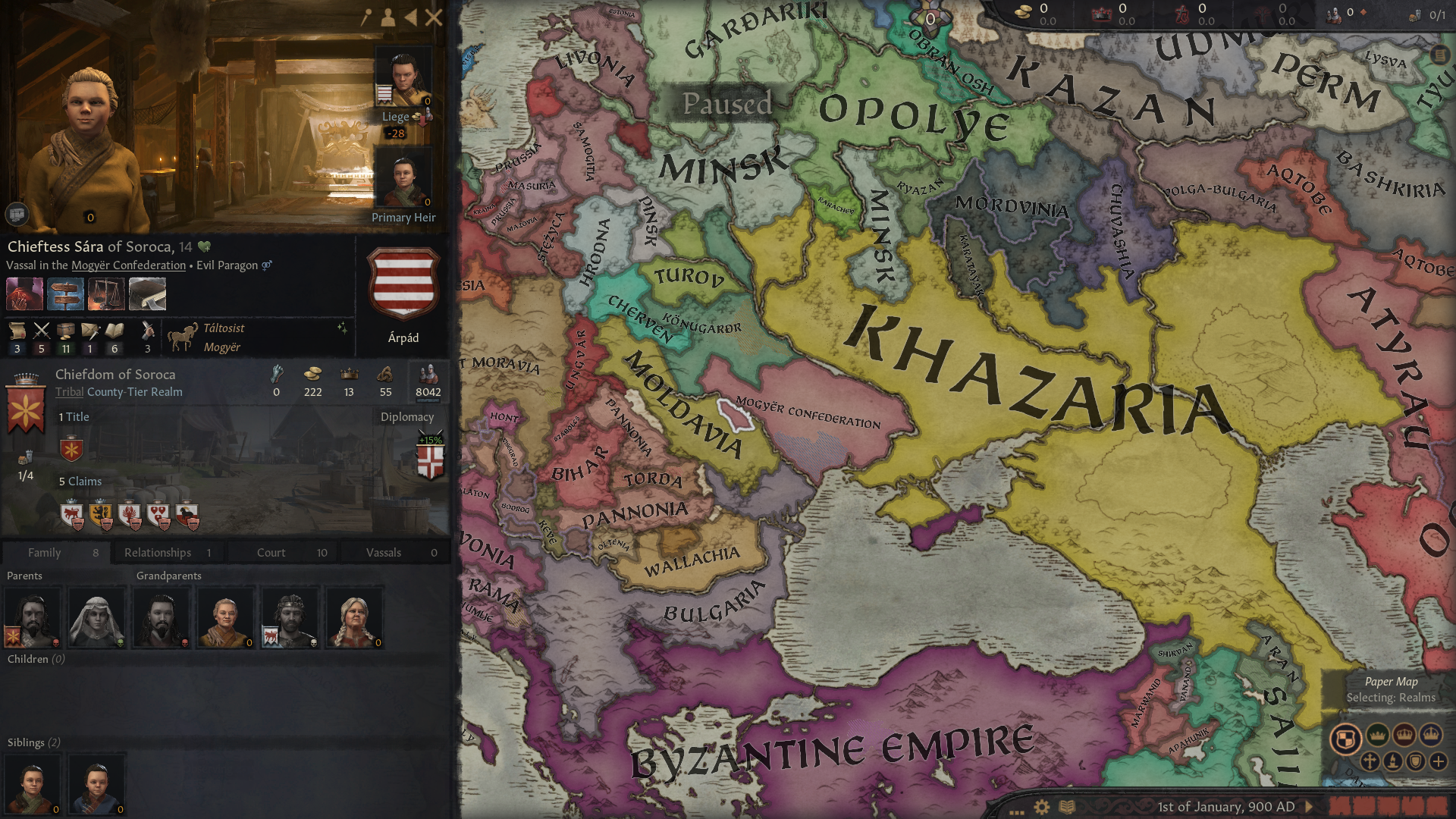 "In 898, the 7 tribes and 108 clans of the Magyar nation joined the then 12 years old Sara Arpad of Soroca in a so-called 'Great Migration' into Great Moravia. We will discuss the outcome of this Great Migration in the next class." 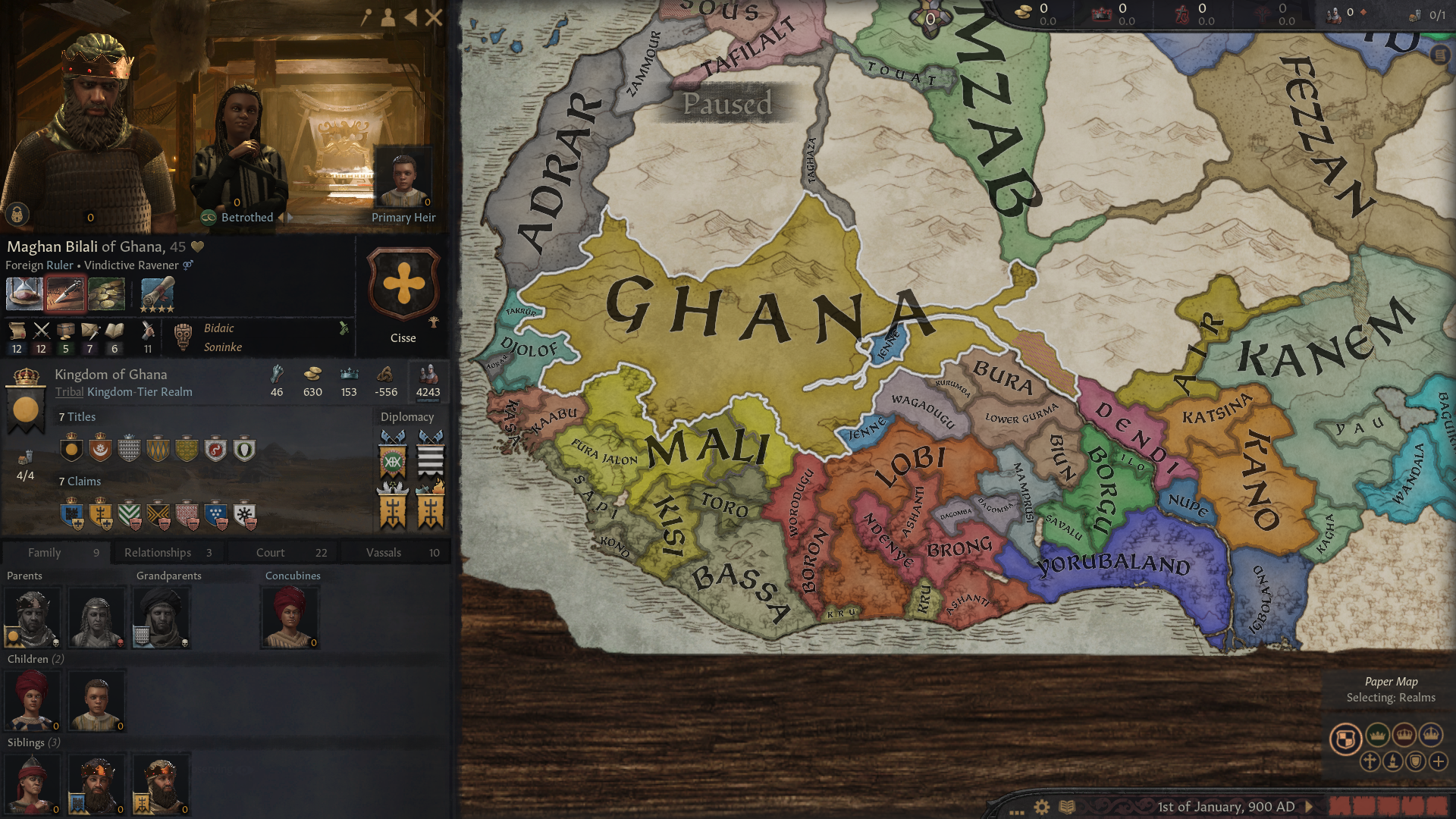 "Meanwhile in Africa, the Kingdom of Ghana was a rising power. They frequently raided their neighbors, in particular the wealthy state of Mali, and these raids helped the rulers of Ghana to grow even stronger." 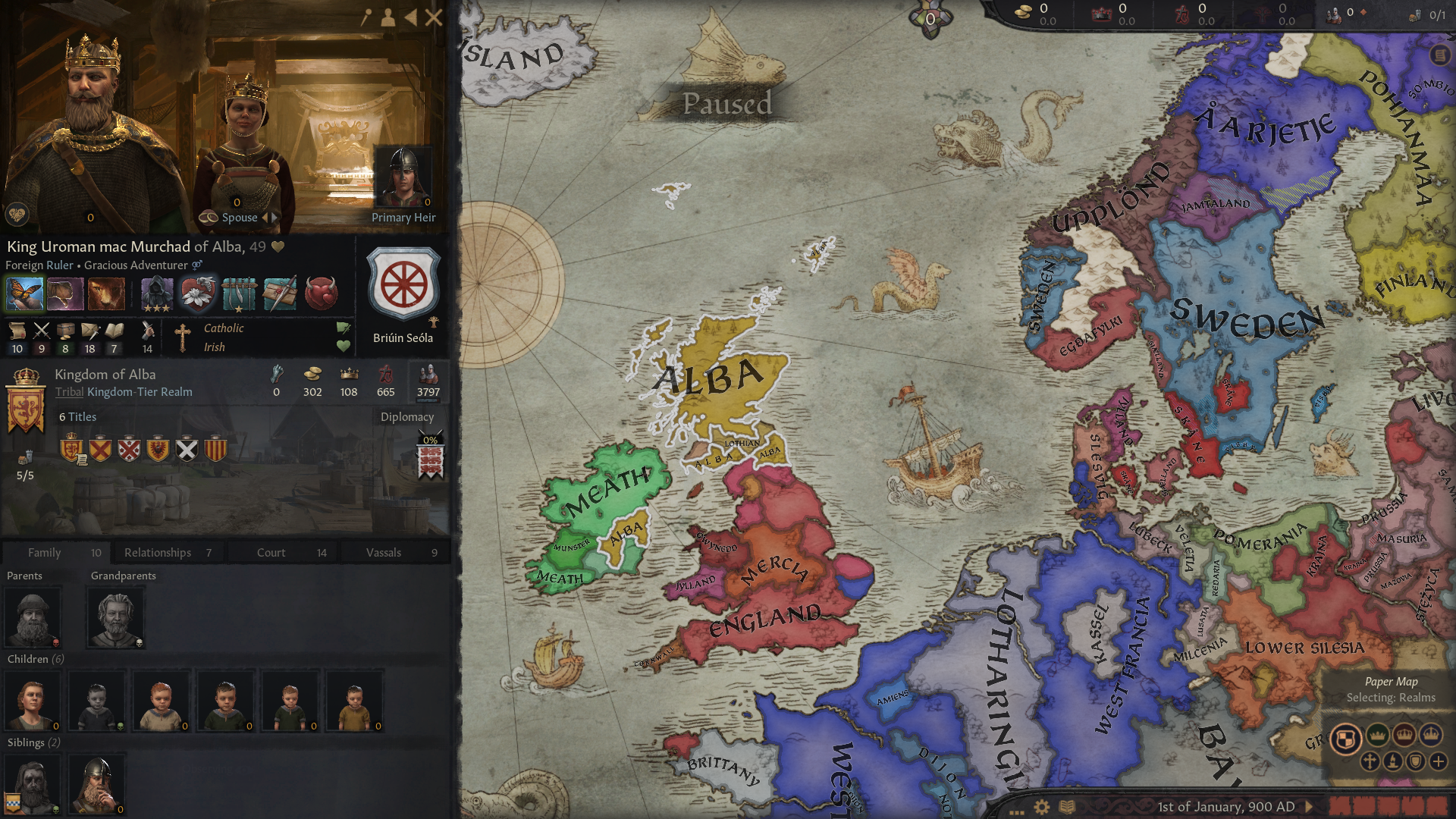 "With the death of Causantin II MacCinaed of the Ailpin dynasty, the Kingdom of Alba was inherited by an Irishman named Uroman mac Murchad. The new Irish king of Alba wasted no time in attacking other Irish states with the goal of uniting them under his rule."

This looks to be an interesting AAR. Subbed!

Also, West Francia will either defeat Lotharingia or perish. They can't be divided like that.
Toggle signature
I have a megacampaign AAR as Byzantium here. It also now has a spinoff in OT - The Demetriad
I have a poetic AAR on the Romano-Mongols here.
I have a Stellaris AAR here.
I have another megacampaign AAR (this one as Epirus). Part 1 is here.
I also have a Victoria II AAR here.
Full AAR list (with AwAARds!) is at my Inkwell

Everything is on hiatus until June. Sorry.

HistoryDude said:
This looks to be an interesting AAR. Subbed!

Also, West Francia will either defeat Lotharingia or perish. They can't be divided like that.
Click to expand...

And aye, we shall see what happens. 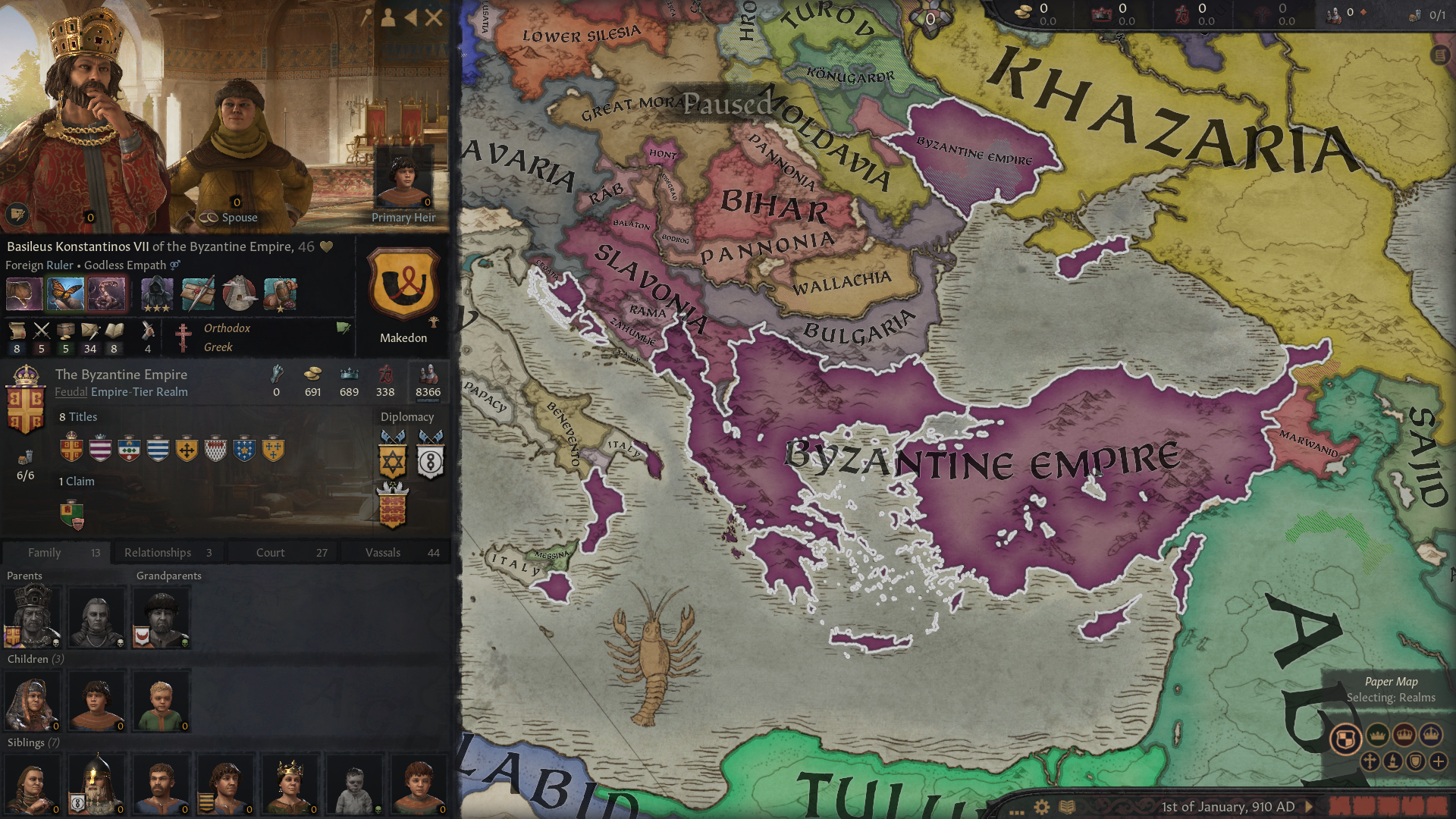 "Sara Arpad's Great Migration never succeeded. Not because she was defeated by Great Moravia. In fact, she had won most of the initial battles against them. The Magyar tribes and clans under her banner were recalled by Grand Prince Domoszlo Linutikafi Arpad to fight against the invading Byzantine armies. The Magyars lost most of their lands in this war and Domoszlo Linutikafi blamed his relative Sara's so-called 'Great Migration' for the defeat. He revoked all of her titles and had her banished." 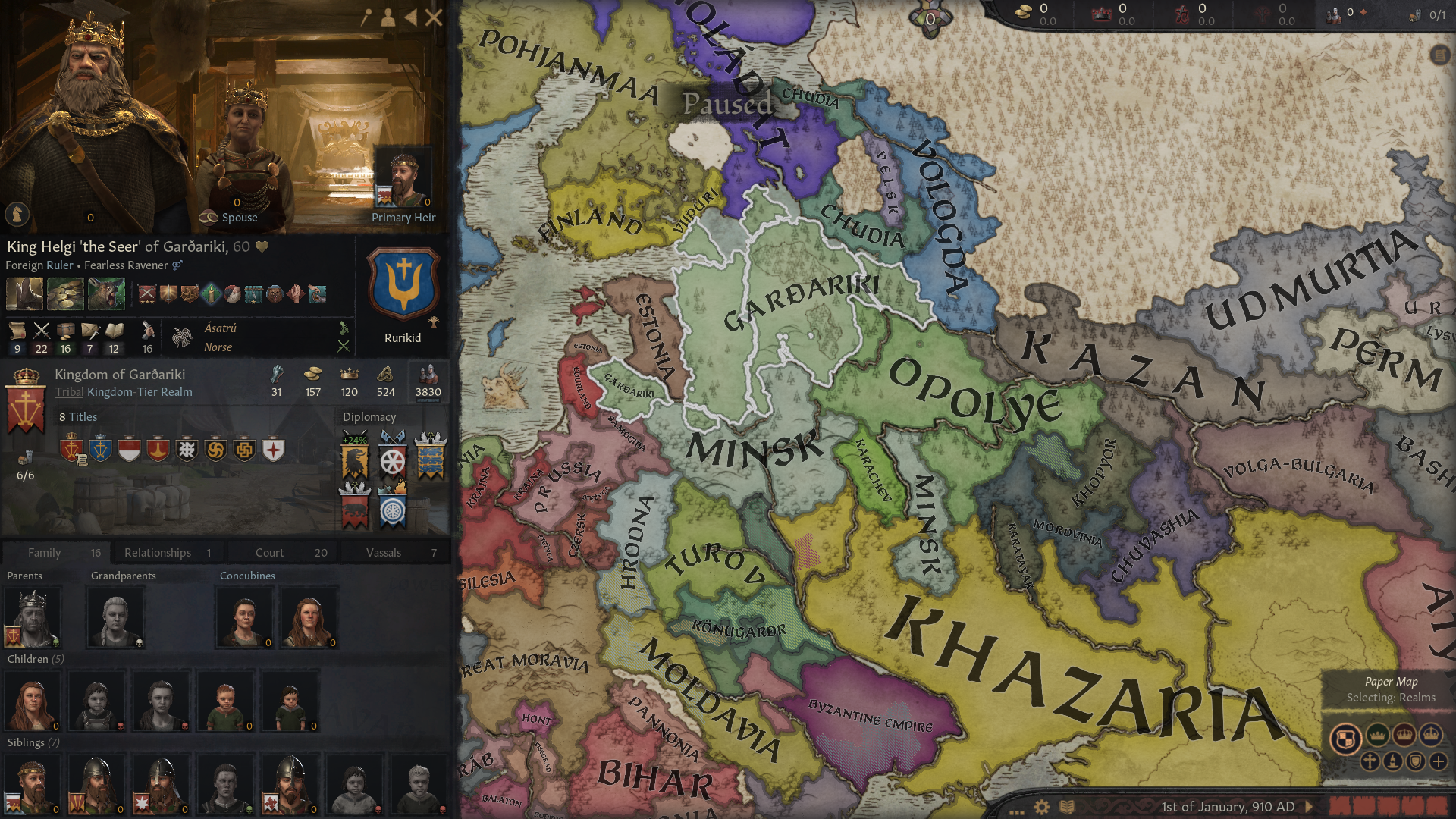 "Sara Arpad disappears from historical records after this though many Norse sources claim that a Magyar woman matching her description converted to the local religion and traveled around the courts of one Norse ruler to another for rest of her life. At one point, she was even present at the court of Rurikid King Helgi the Seer and likely fought alongside him on his wars."

Dang, this was so much wasted potential. In this universe, we likely have "What If Sara Arpad's Great Migration Had Succeeded" type novels and YouTube video 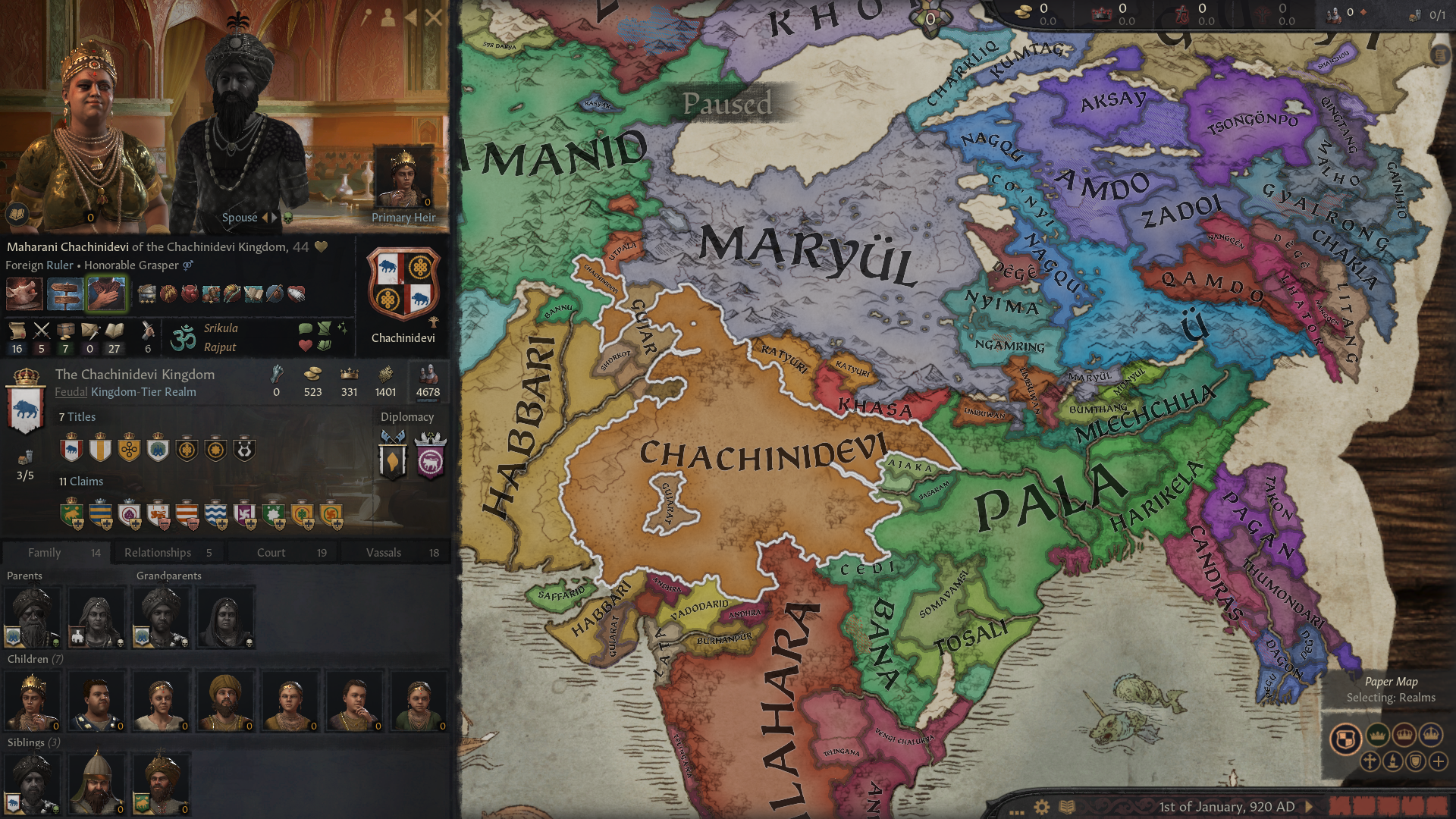 "The 910s saw the realm of the Pratiharas mostly reunited once again under Maharani Chachinidevi. The Pratihara dynasty, now through the Chachinidevi branch, was once again the great power of the Indian subcontinent." 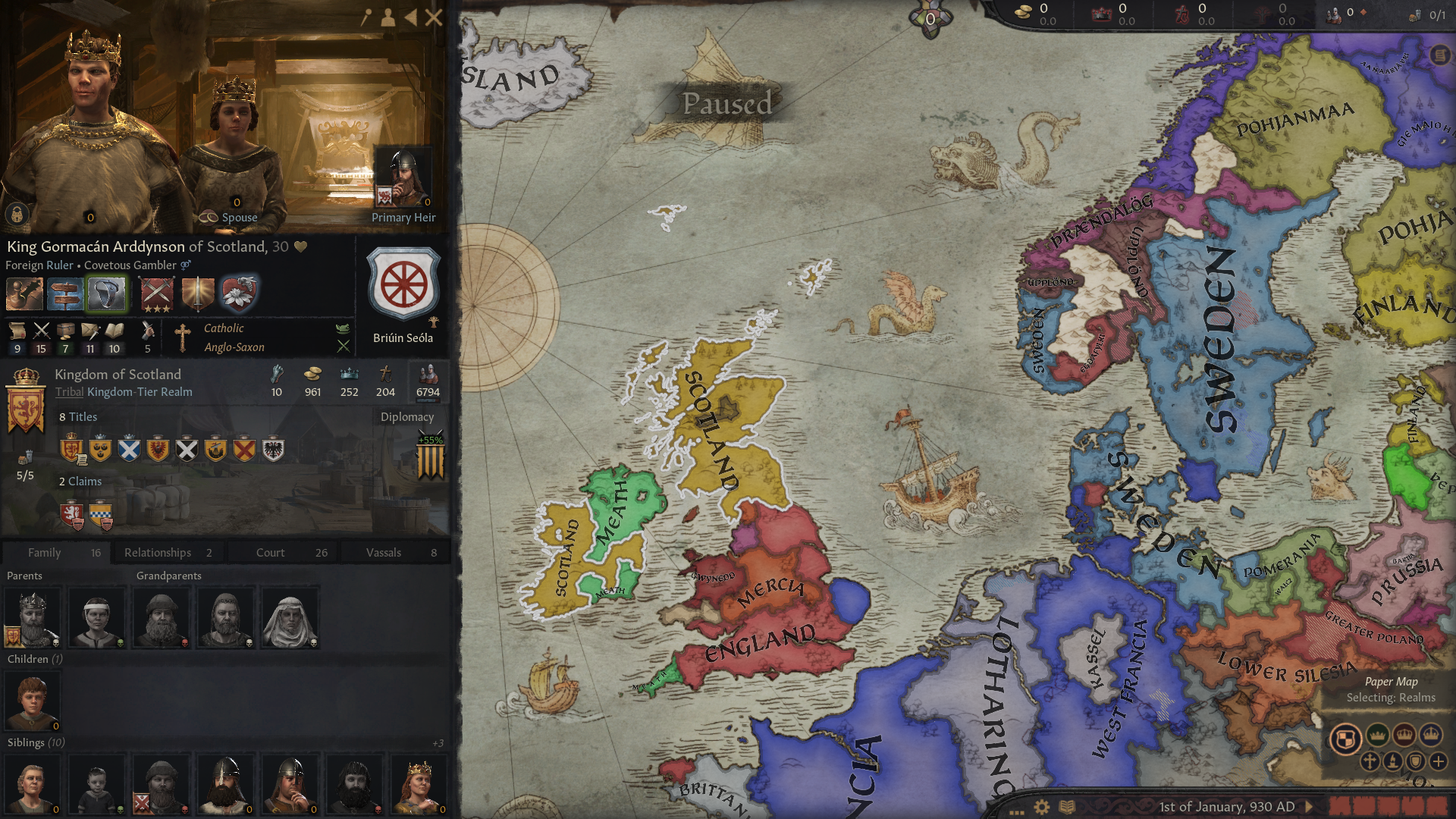 "The name for Alba was changed to Scotland during this period. The new king, Gormacan Arddynson, had been raised by his Anglo-Saxon mother and he was brought up in this culture. Vassals in the kingdom did not like their new ruler and revolted against him." 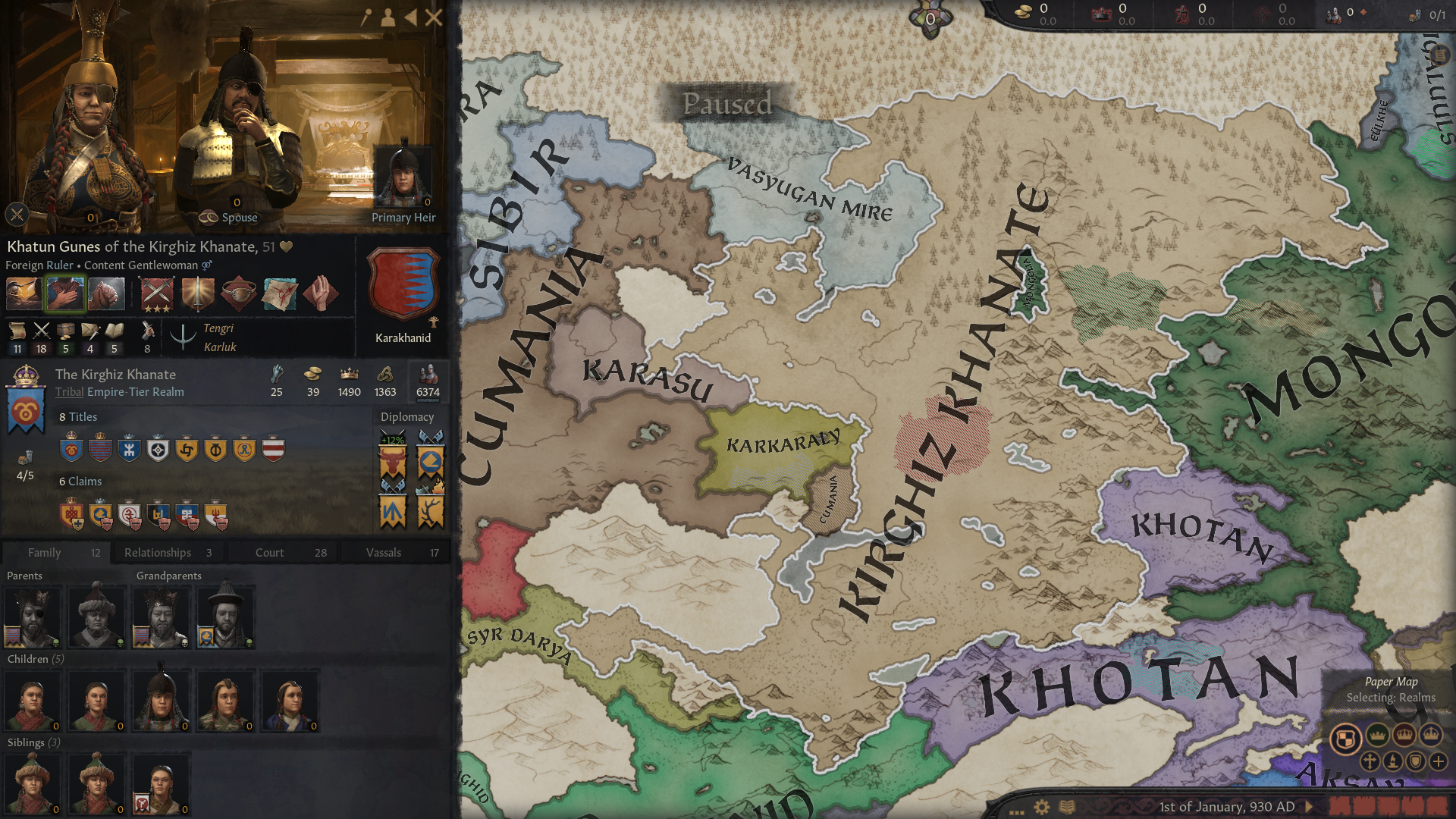 "This decade saw the rise of the Kirghiz Khanate. This title was originally held by the Enisey Kyrgyz clan. Khatun Gunes rallied the Karakhanids and other Karluk Turks under her banner and subjugated the Kirghiz in 924. After her victory against the Kirghiz, she then went to war against the Cumans." 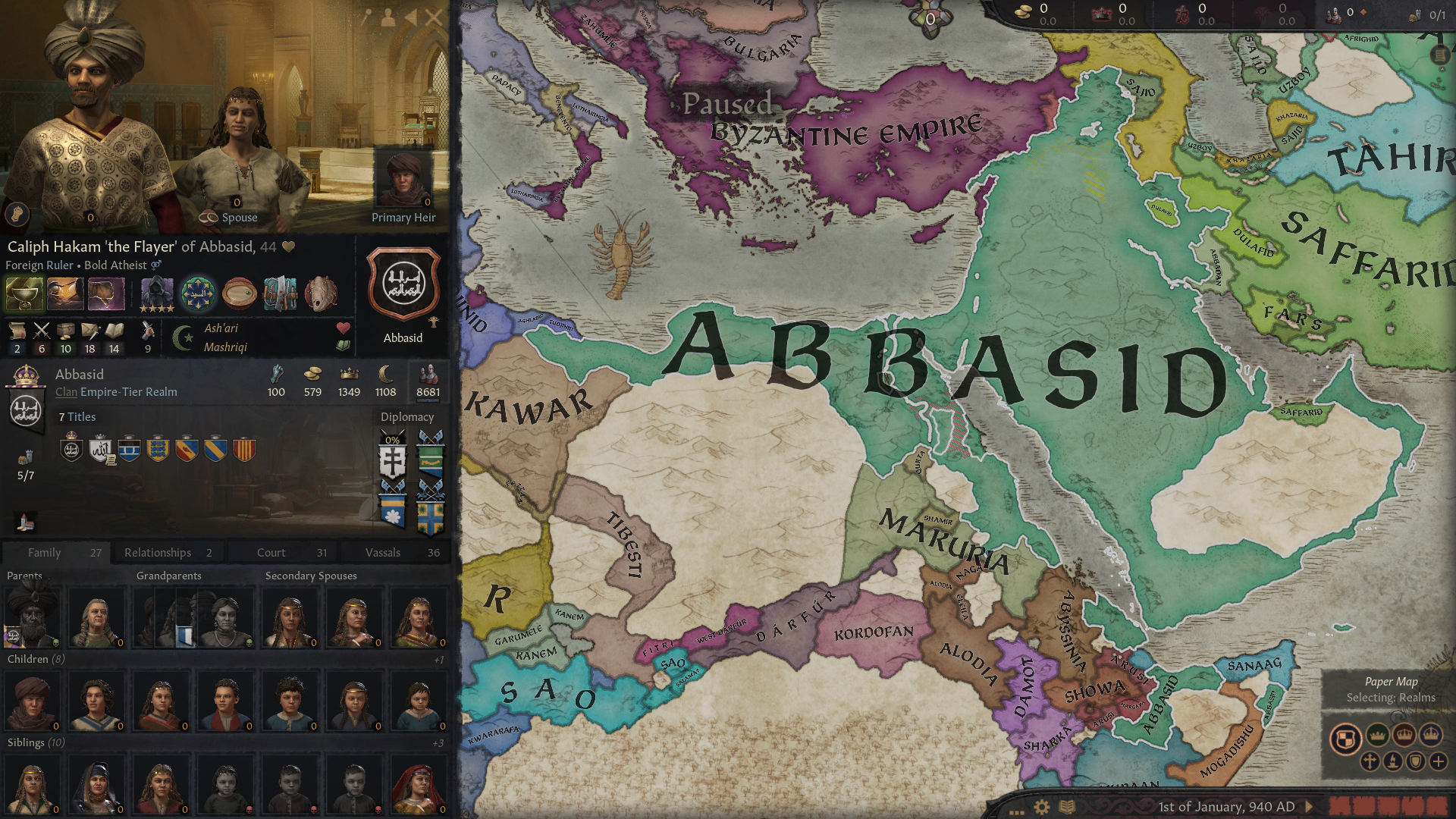 "The Abbasid Caliphate grew in size during the 930s. The Tulunids in Egypt were conquered in a short war and the Christian kingdom of Makuria was Caliph Hakam the Flayer's next target." 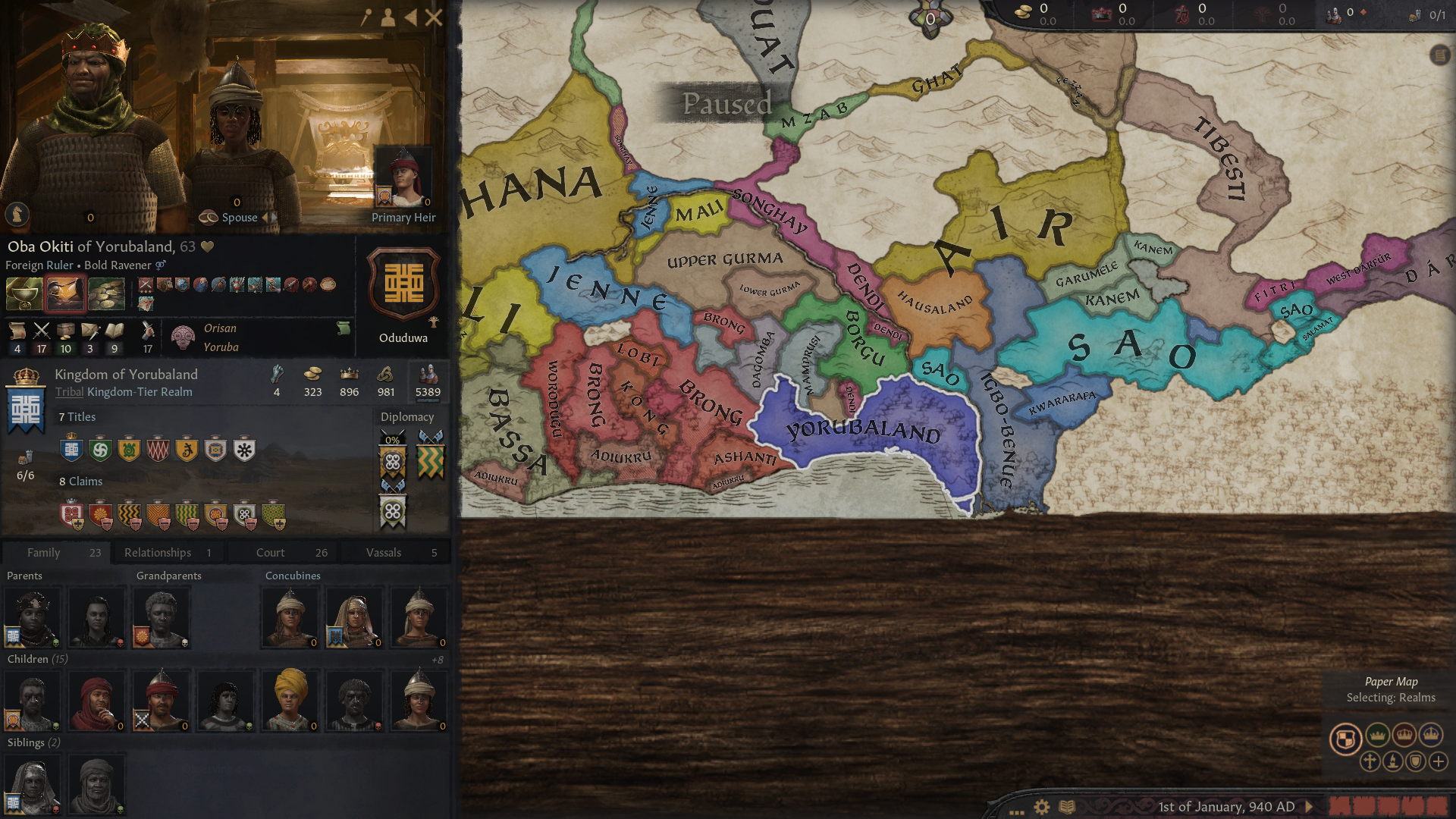 "Ghana had a new competitor in West Africa with the rise of the Yoruba people." 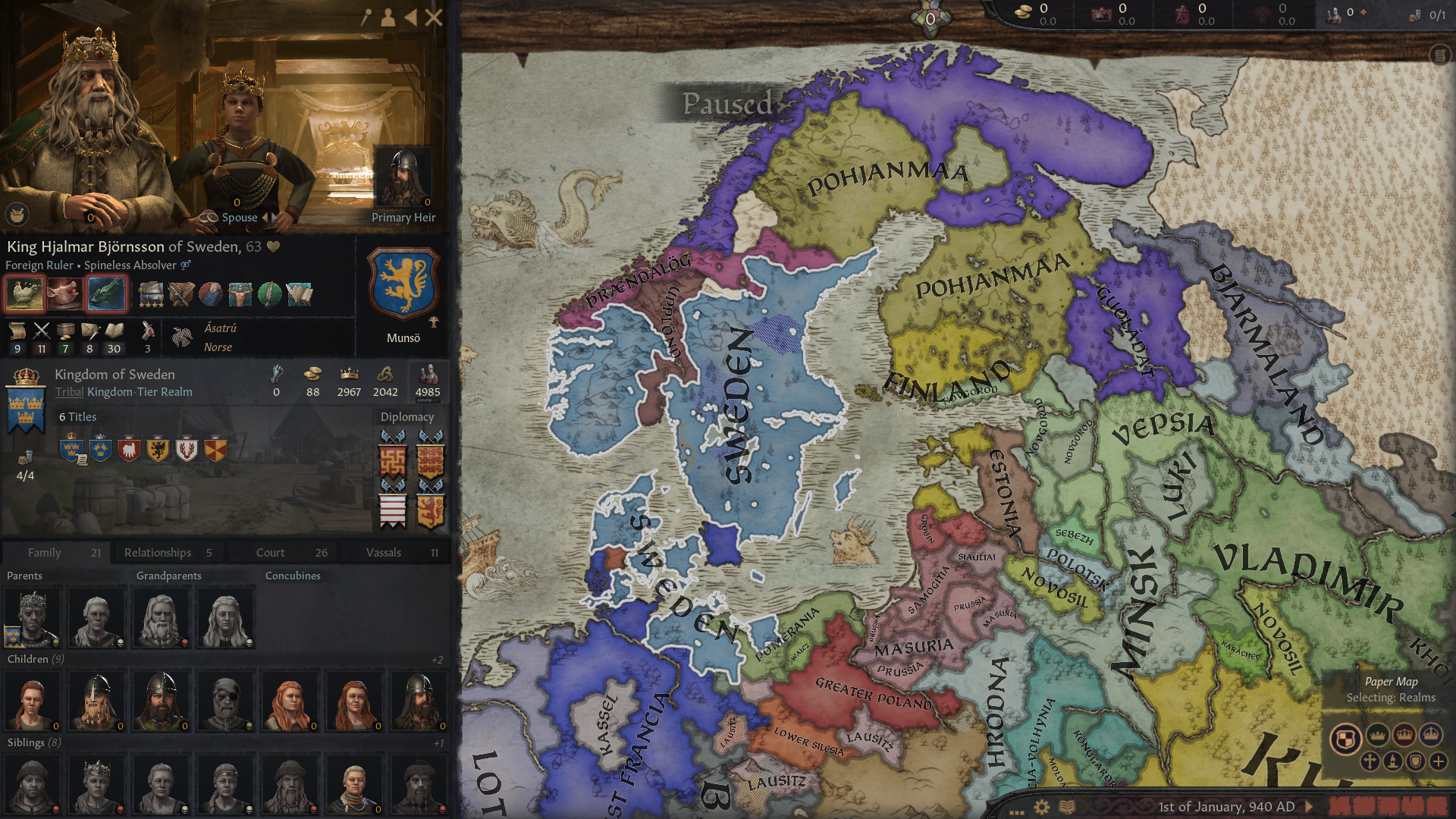 "Up north, the Kingdom of Sweden led by the Munso family became the undisputed power in Scandinavia." 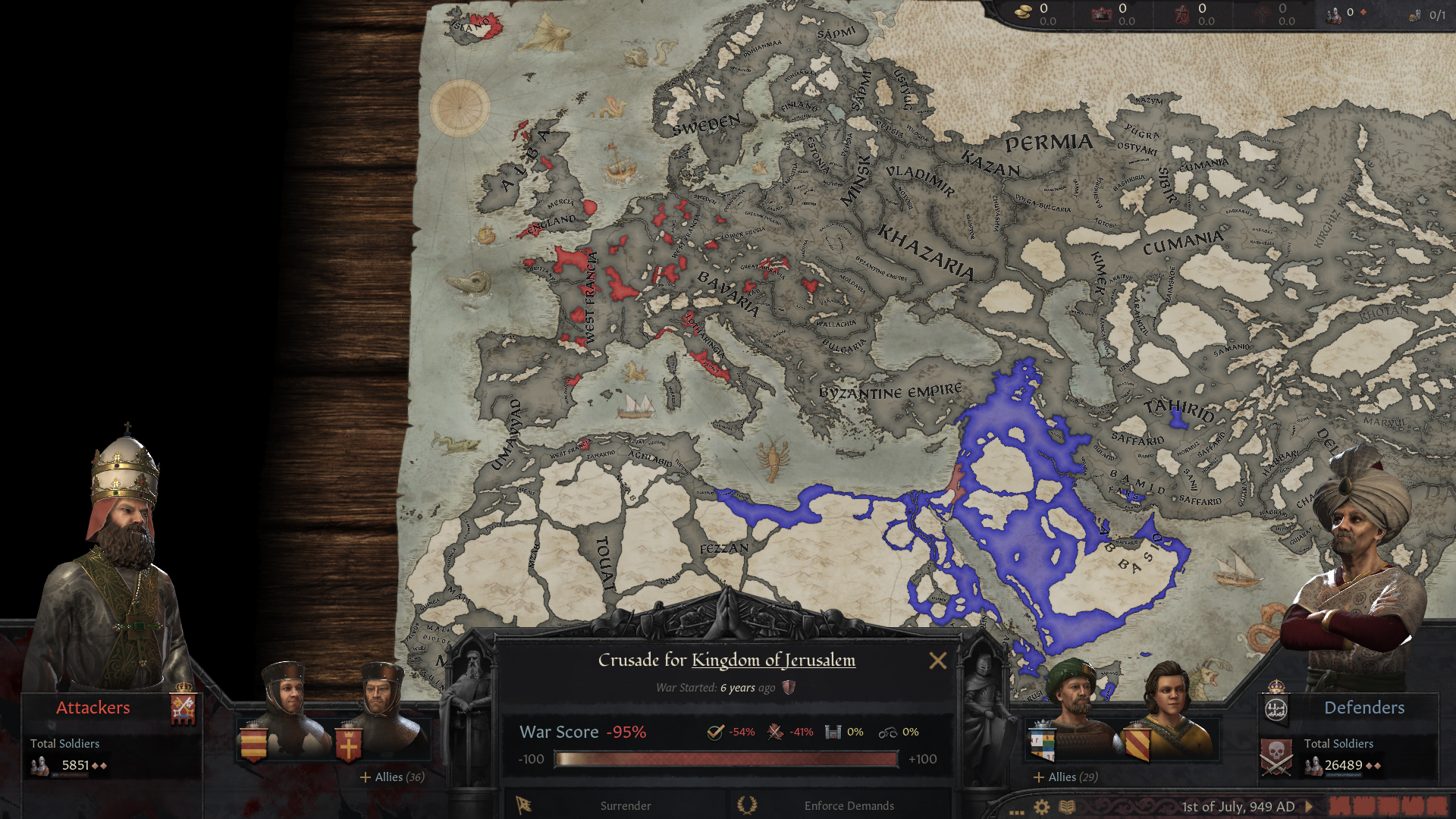 "Pope Hadrianus III declared what is now known as the First Crusade on 27 June 943. However, the enthusiasm for this new type of religious war turned out to be much less that what the Pope had hoped for. Only a few dukes and counts participated in this armed pilgrimage to Jerusalem. Their primary opponent was the Abbasid Caliph Hakam the Flayer and he fielded more than half of the Muslim army that fought against the Crusaders. After six years of futile war, the Pope was forced to put an end to the holy war by signing a peace treaty with the Abbasids." 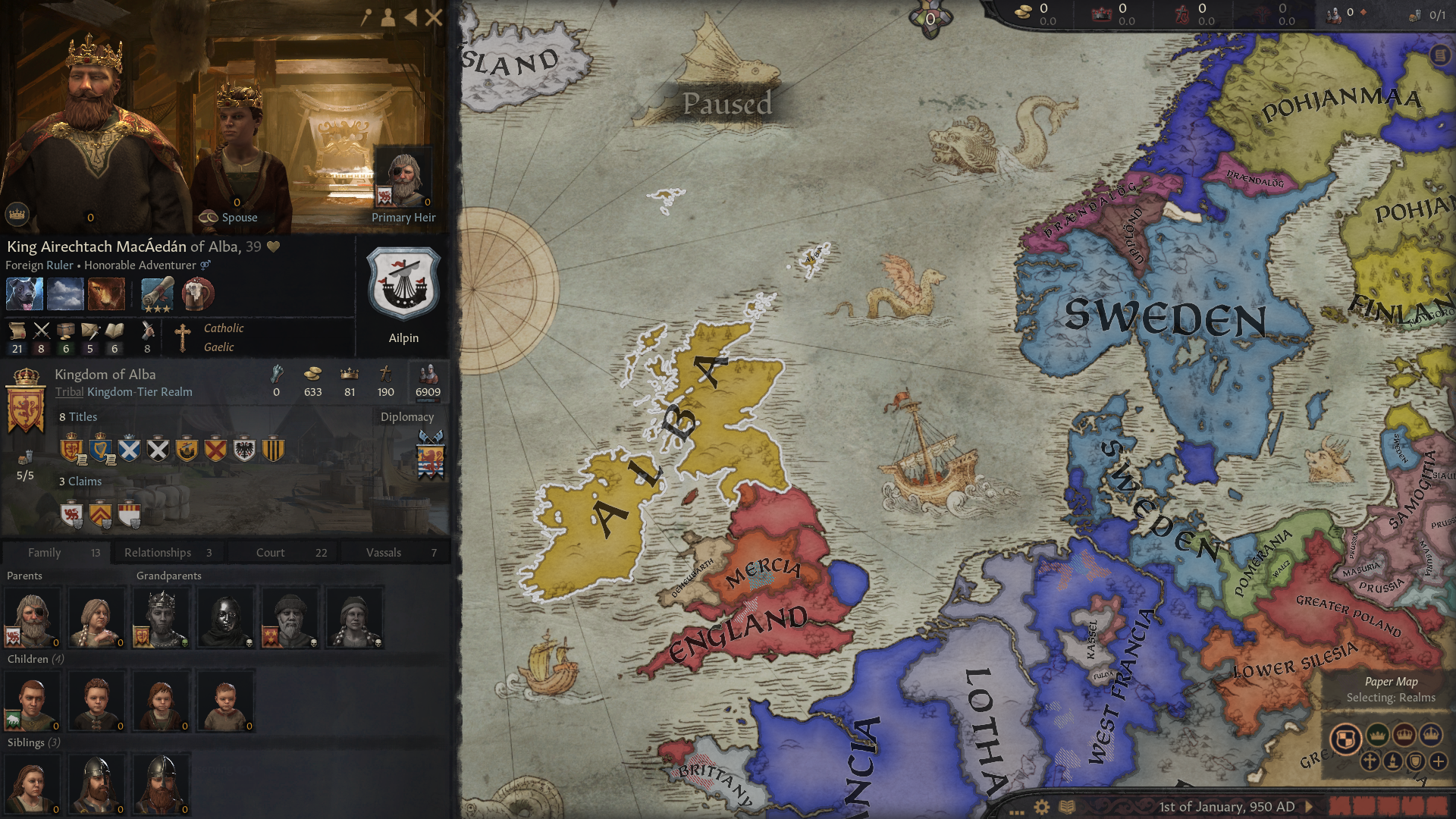 "With the death of the Anglo-Saxon ruler Gormacan Arddynson, the realm was once again under the rule of the Ailpin dynasty and called Kingdom of Alba once again. While the Pope was busy fighting the First Crusade, King Airechtach MacAedan of Alba had united Ireland and Scotland under one crown." 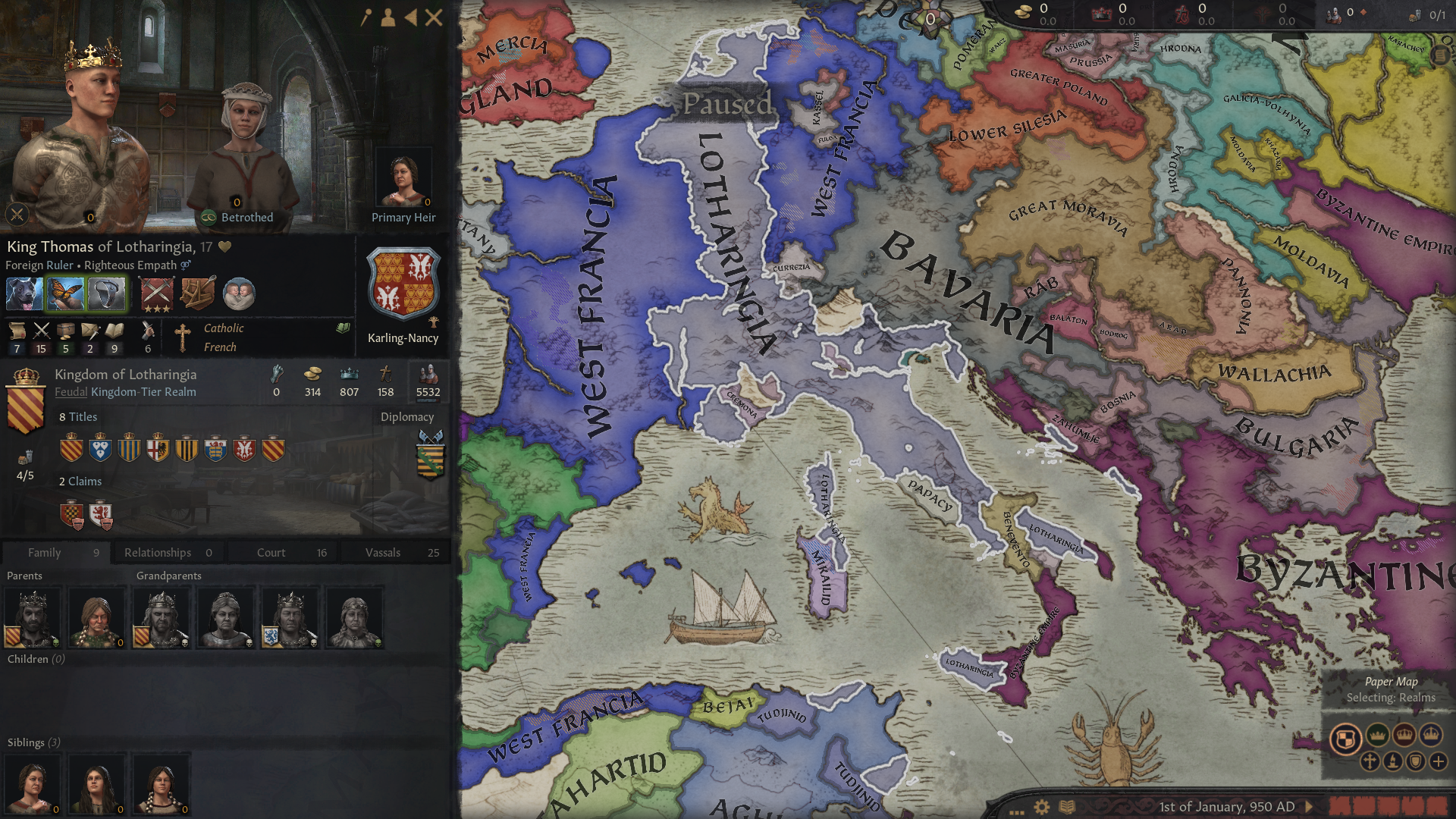 "King Thomas of Lotharingia had been another Catholic ruler who did not take part in the First Crusade and instead expanded his own realm. He completely annexed all lands owned by the former Kingdom of Italy. Despite a hostile West Francia surrounding them on two sides, Lotharingia not only continued to exist but expand as well." 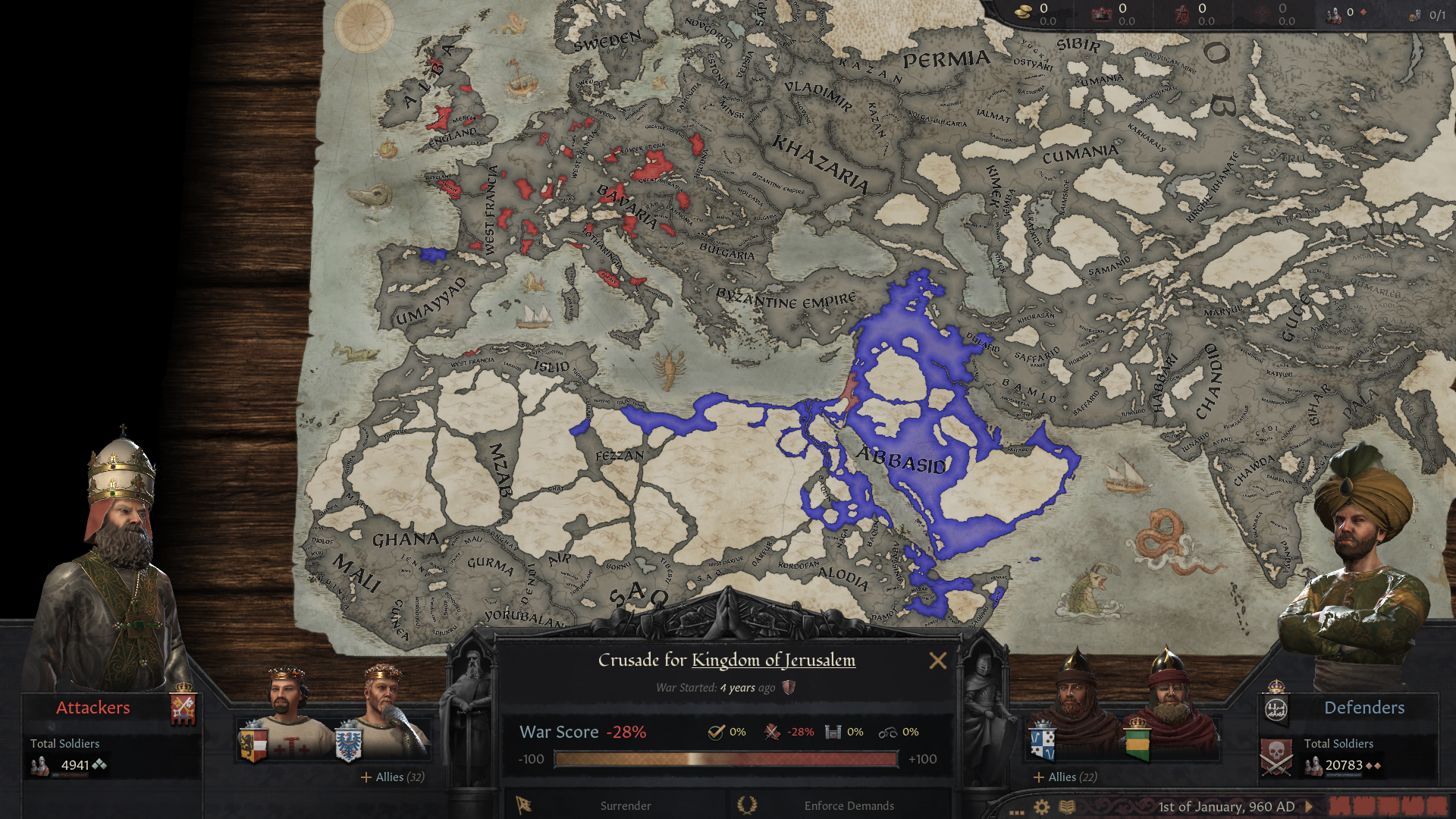 "As soon peace treaty ended, Pope Hadrianus III declared the Second Crusade against the new Abbasid Caliph Khalid ibn Hakam on 23 May 956. There were even less participants in this holy war on the Christian side than in the first one. Many Christian rulers felt that this conflict would fail as miserably as the previous one and they would be proven correct." 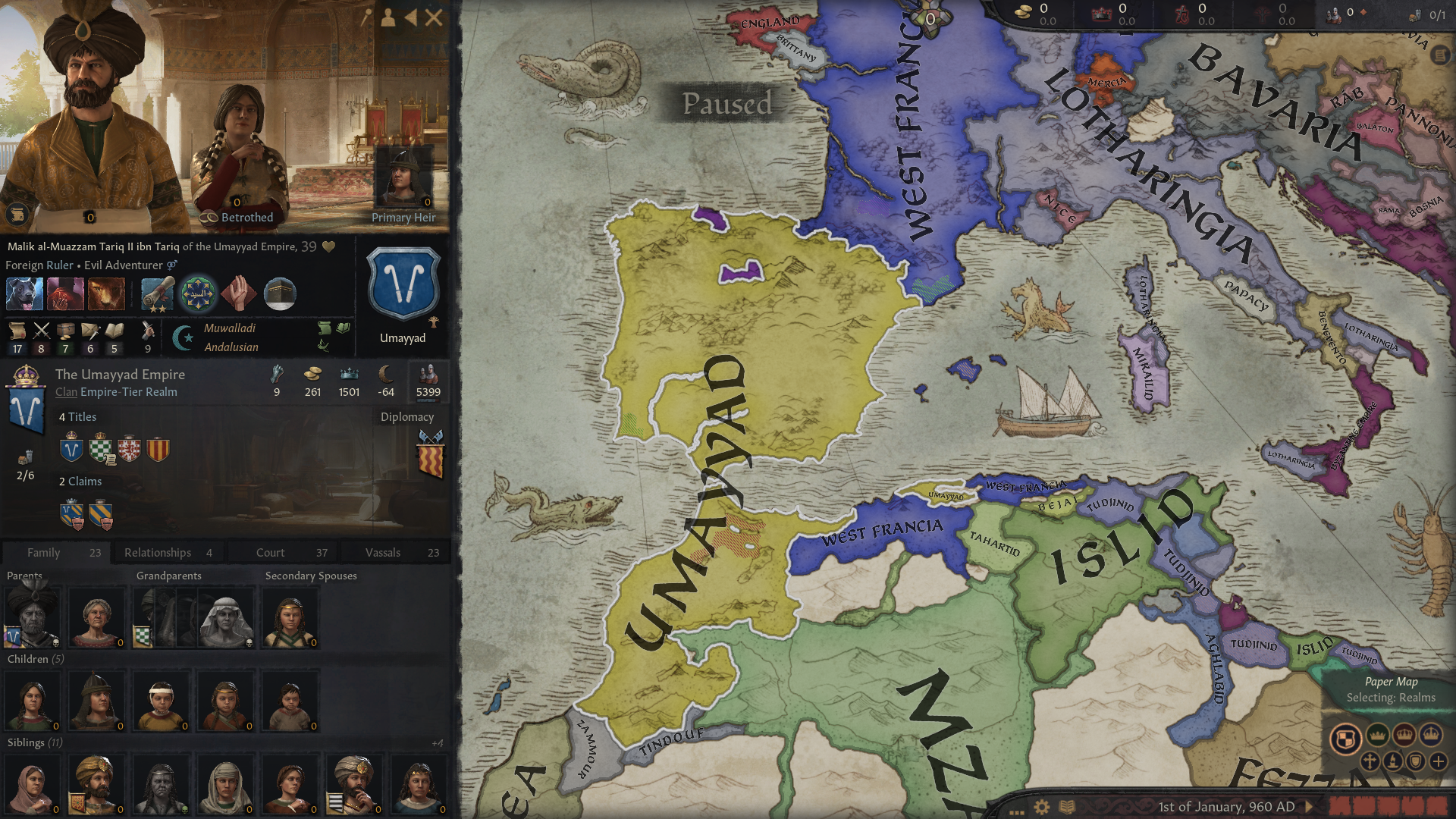 "While the Abbasids were fighting a second crusade against them, the Umayyads were in relative harmony. During the 950s, most of Iberia fell under Umayyad control and Tariq ibn Faruk turned his realm into an empire in 958. He died within a year and was succeeded by his son Tariq II." 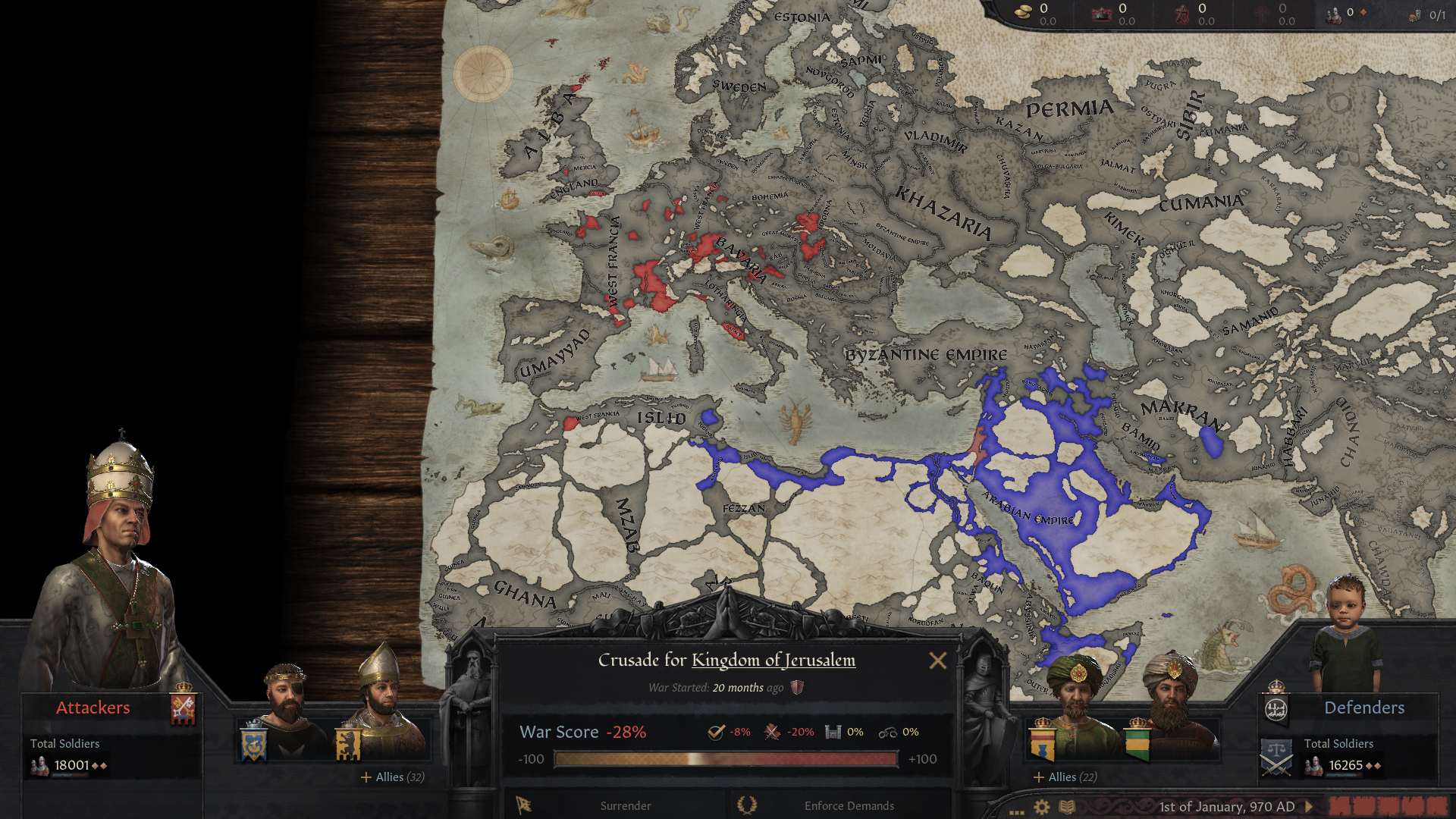 "On 7 April 968, the new Pope Leo V declared the Third Crusade. The enthusiasm for a crusade among Christian rulers was still low but unlike the First and the Second Crusades, the Crusaders would not be fighting against powerful Abbasid Caliphs. Instead, their primary opponent was an infant named Ibrahim ibn Fadil of the Ziyadid dynasty installed as a puppet caliph by powerful vassals. The Ziyadid Caliphate, ruled by a barely 2 years old child, was extremely unstable and we shall discuss the Third Crusade even more in our next class." 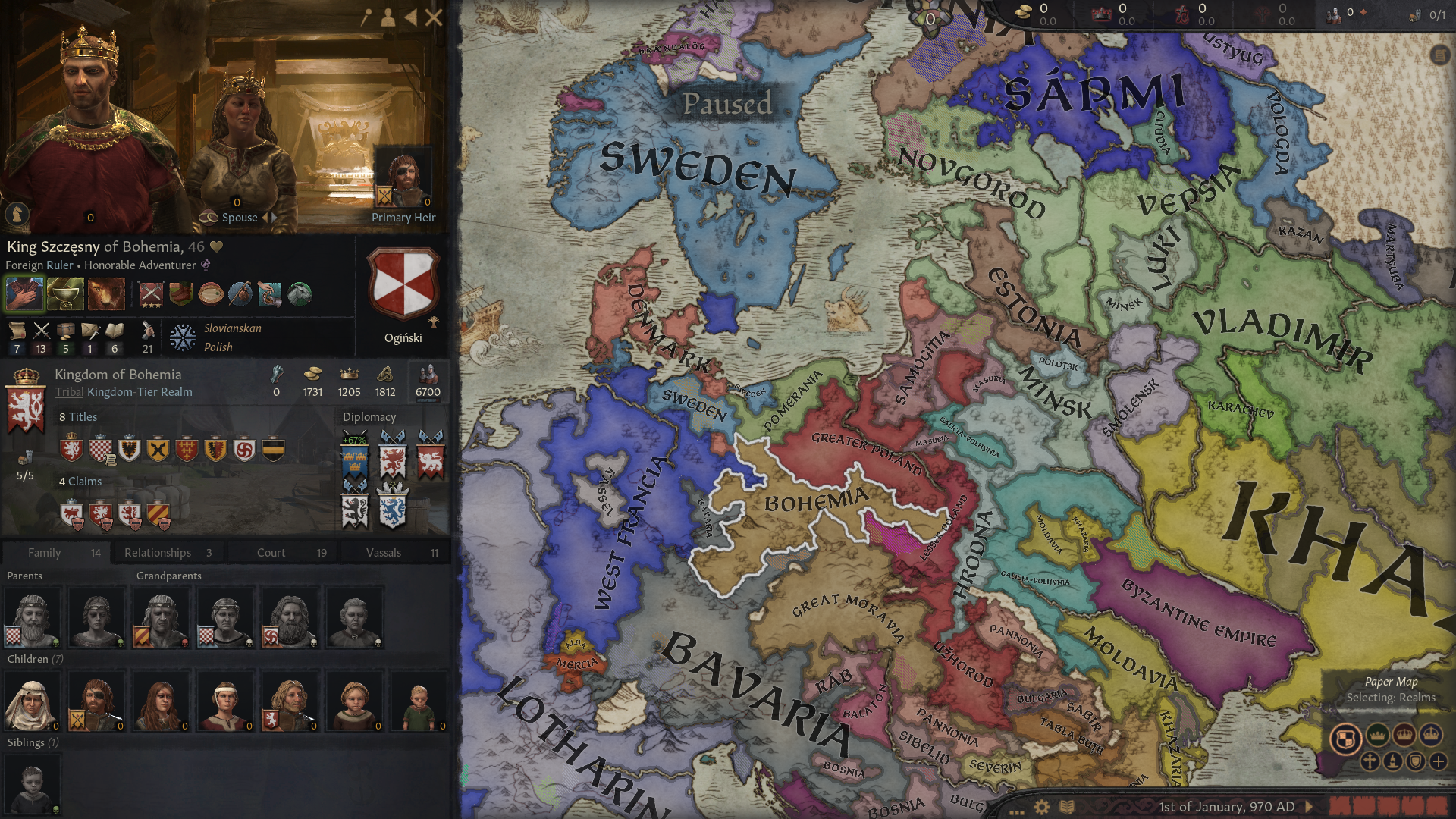 "The 960s gave rise to a new power in the form of Bohemia. This kingdom was established on 17 January 967 by the Polish King Szczesny Oginski." 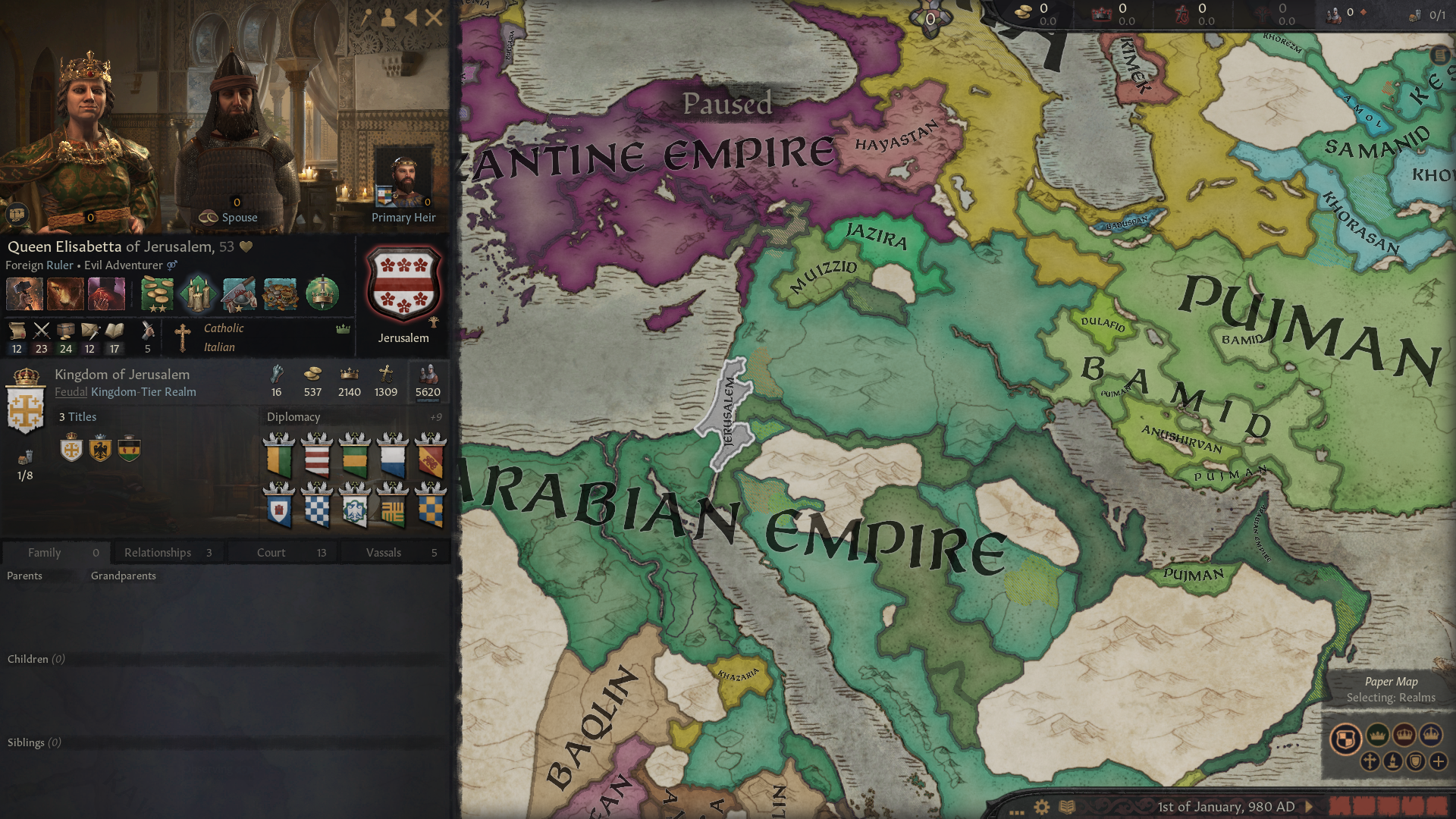 "The political instability in the Arabian Empire led by an infant puppet caliph helped the Crusaders finally win a crusade at their third attempt. An Italian woman named Elisabetta was crowned the first Crusader Queen of Jerusalem on 7 July 975 by the Pope. To help improve her relationship with the locals, the Crusader Queen took a native Muslim man named Abdul-Wahad as her husband." 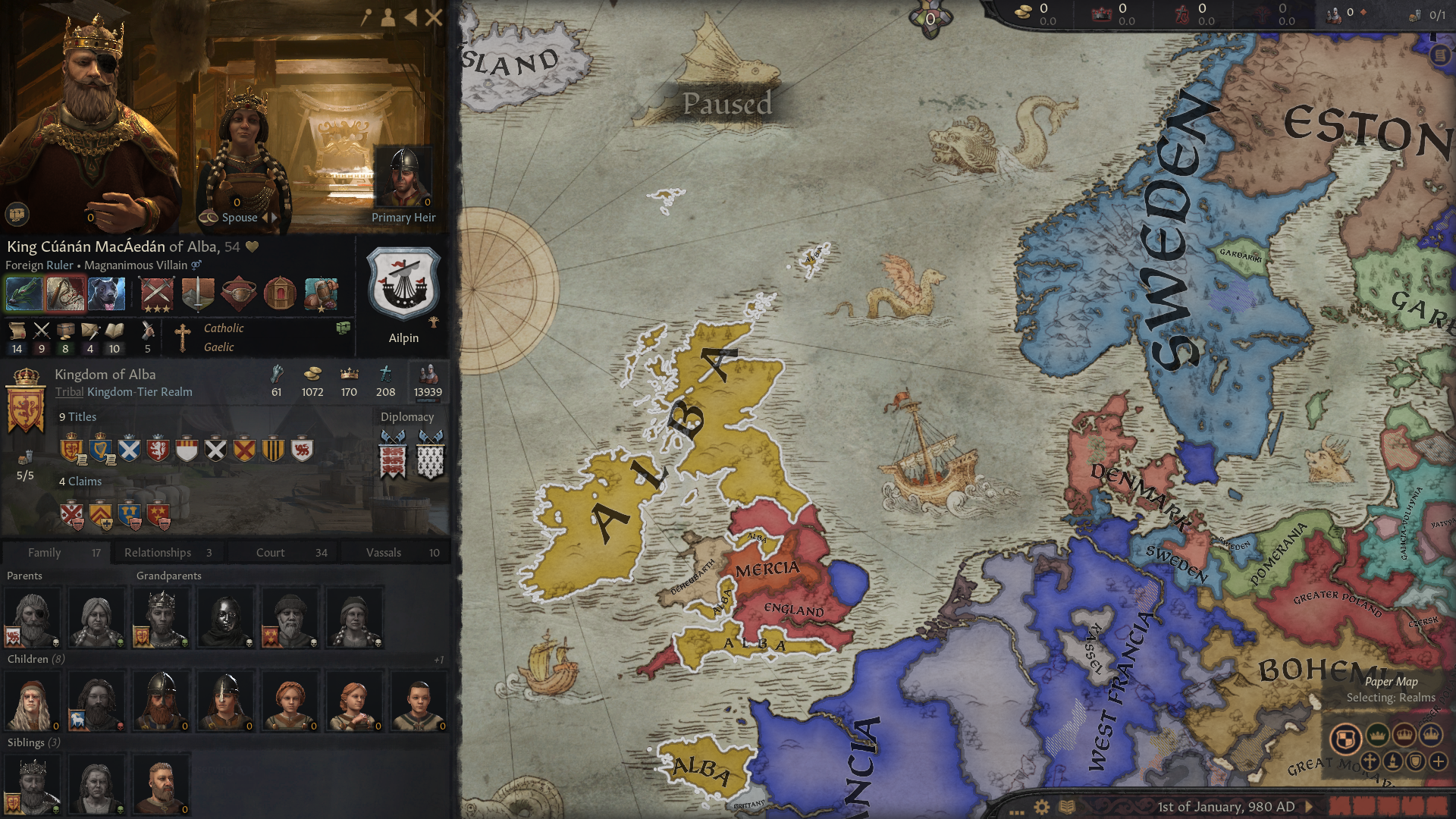 "The Kingdom of Alba was once again, busy expanding rather than fighting in a crusade. This decade saw them take over lands in south England and Brittany." 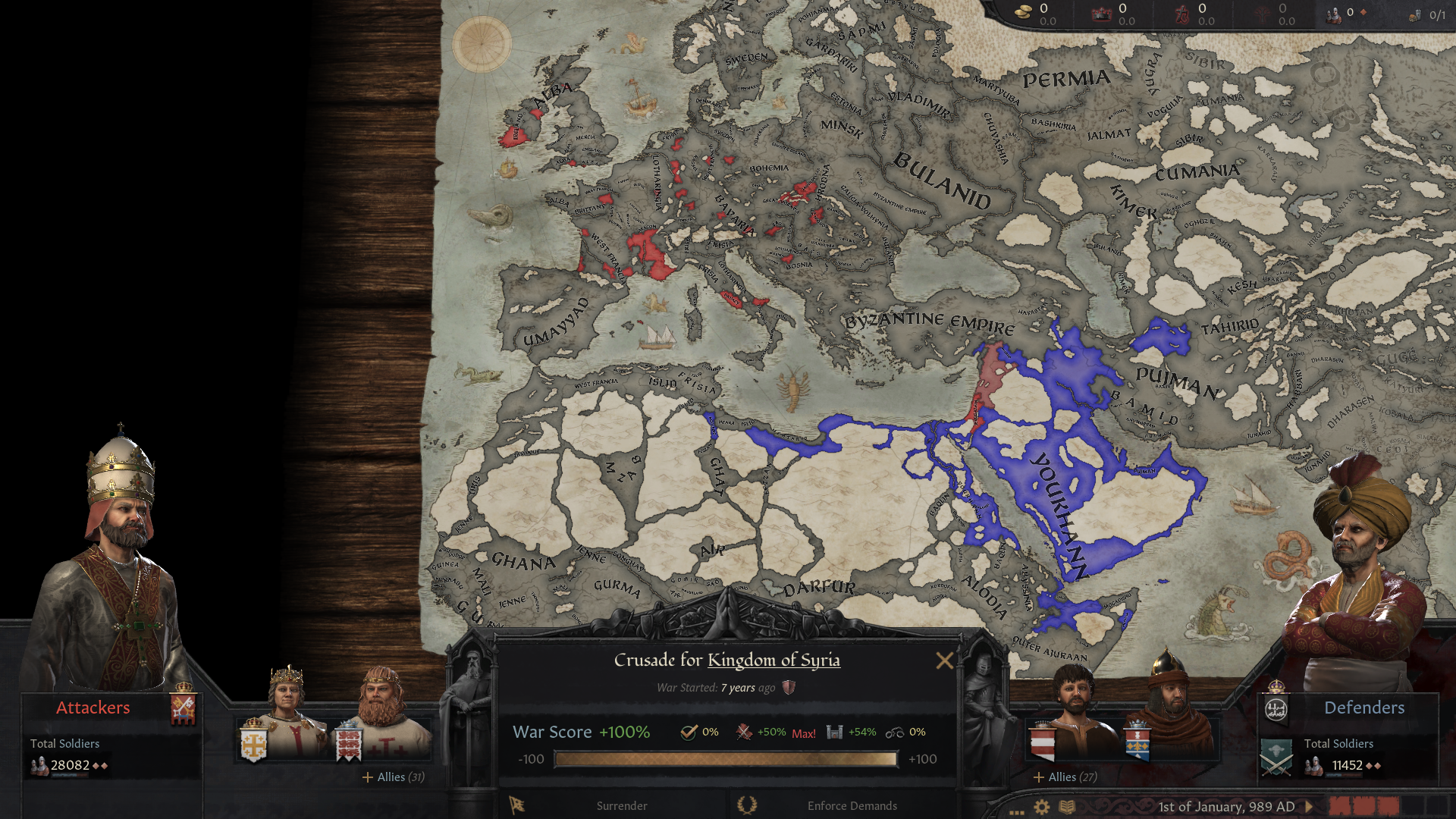 "The success of the Third Crusade created new enthusiasm in the Christendom for more holy wars. Pope Leo VI declared the Fourth Crusade on 16 December 981 against the Sunni Caliph Youkhanna ibn Hakam. This new caliph was a son of Caliph Hakam the Flayer and brother of another caliph Khalid ibn Hakam. These two caliphs had won against Crusaders during the First and the Second Crusades and Youkhanna installed by a faction demand after Ibrahim ibn Fadil Ziyadid was seen as the primary reason for Muslim defeat in the Third Crusade. The hope was that a caliph from the Abbasid dynasty would be able to defeat another Crusade." 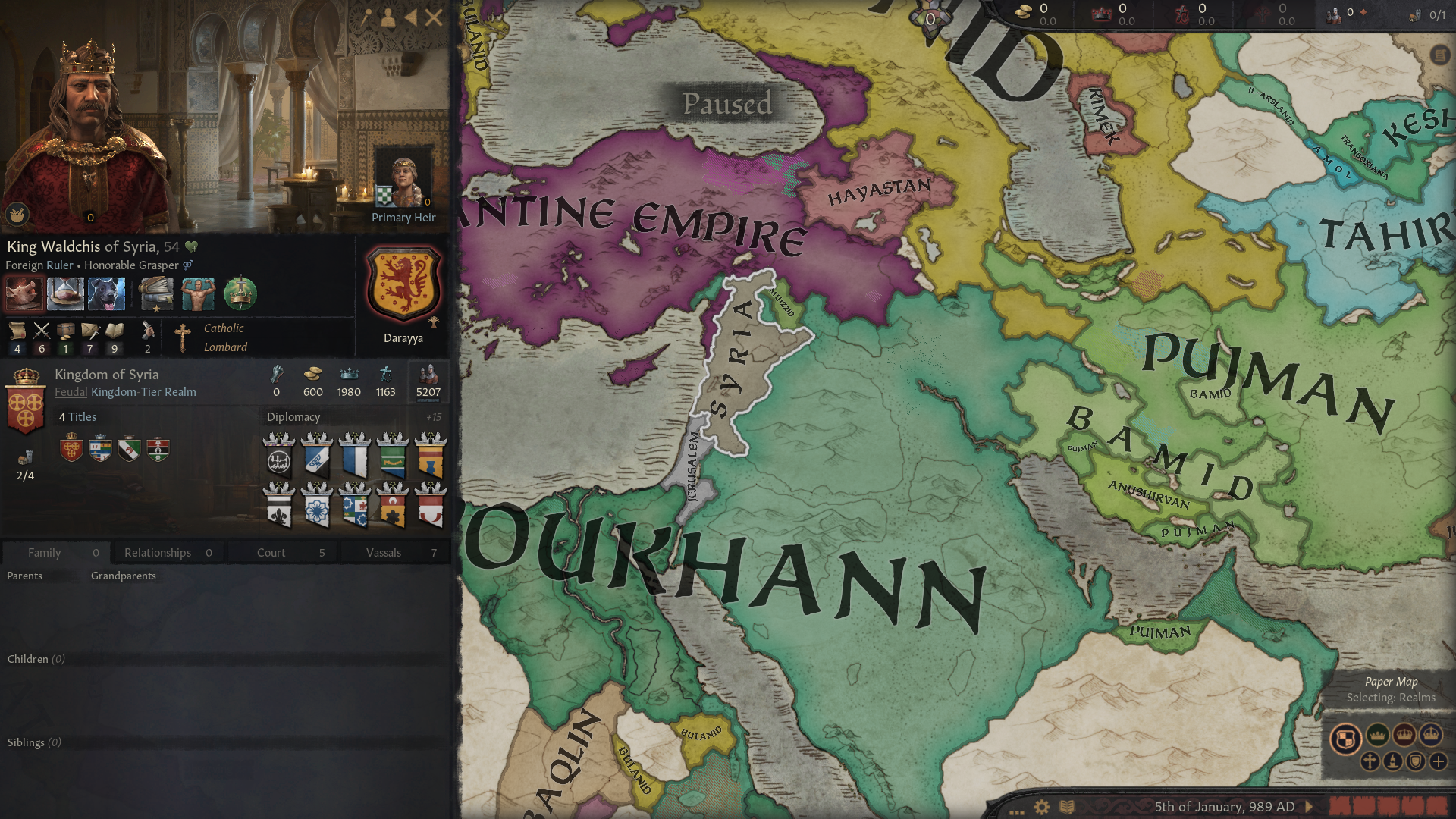 "But even a caliph from the Abbasid dynasty was unable to stop the zealous Crusaders and in 3 January 989, a Lombard man named Waldchis Darayya was made the Crusader King of Syria by the Pope." 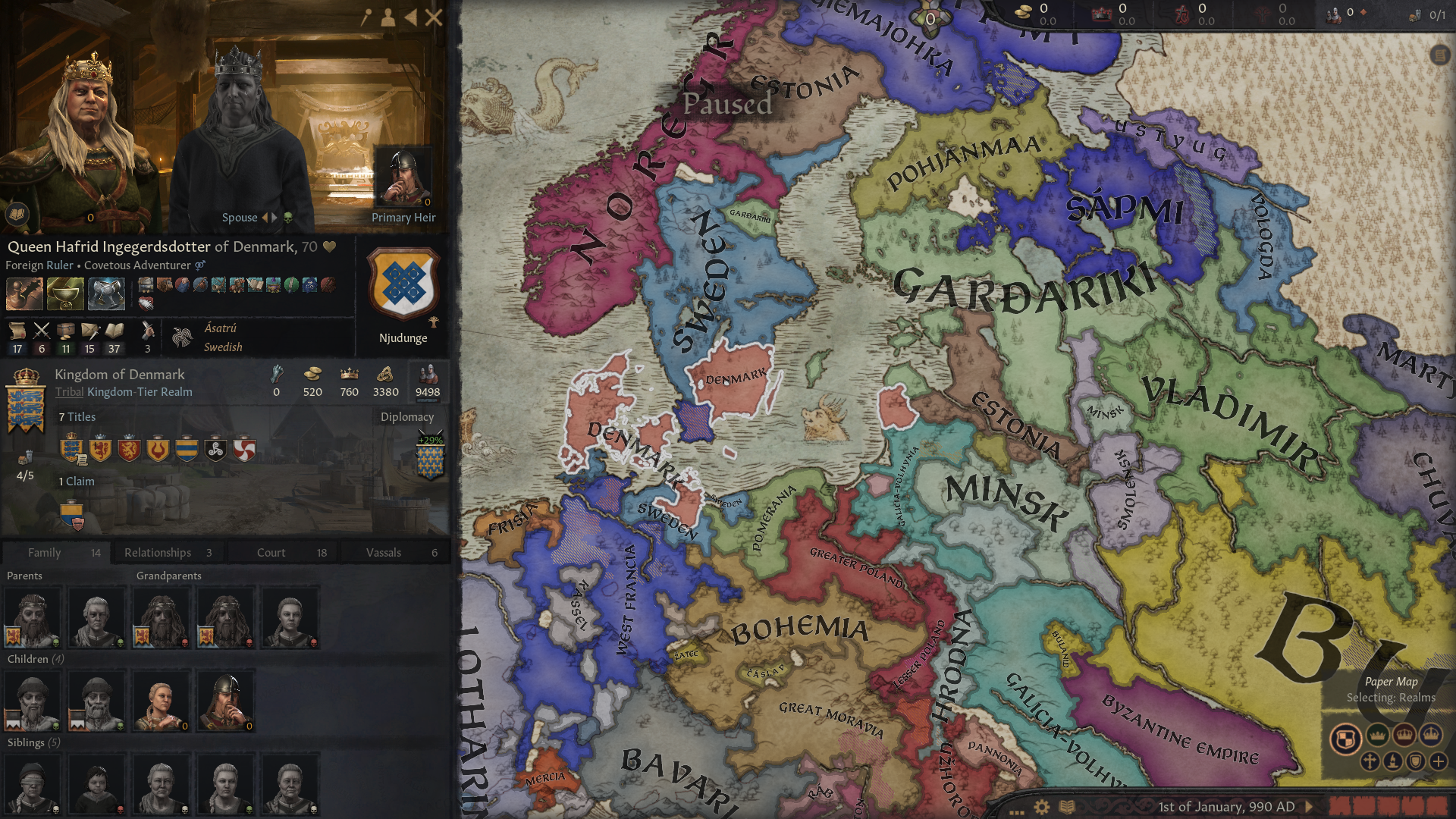 "Meanwhile in Scandinavia, the Kingdom of Sweden had fragmented. The newly formed Kingdom of Denmark led by Queen Hafrid Ingegersdsdotter Njudunge had taken advantage of the decline of Sweden and the instability in West Francia to rise in power." 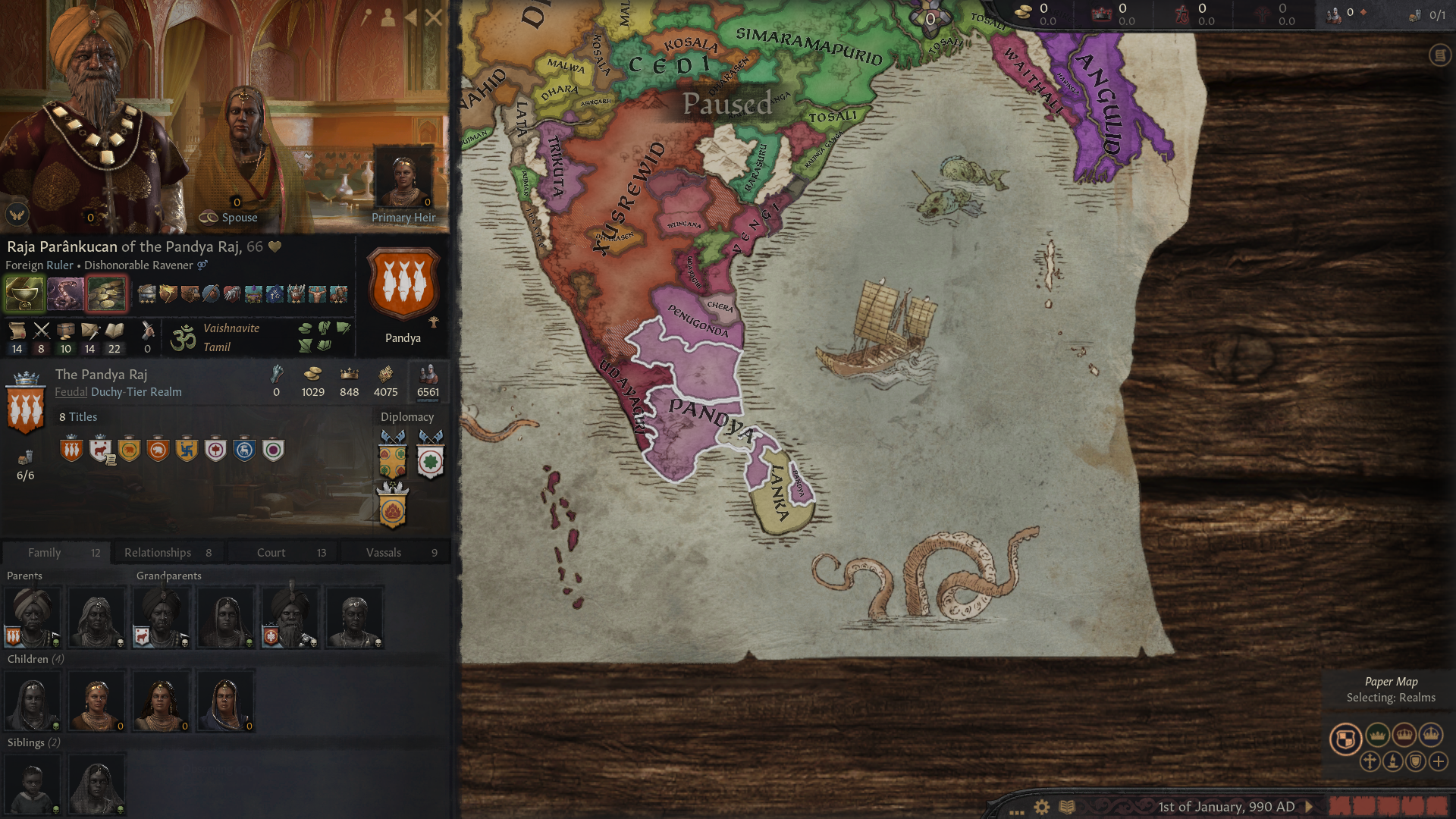 "In the Indian subcontinent, the Pandyas had become the dominant power in the south. They started expanding into Lanka during this decade."

Sweden was mighty, but their time is ending...

Third time is the charm, Crusade-wise...
Toggle signature
I have a megacampaign AAR as Byzantium here. It also now has a spinoff in OT - The Demetriad
I have a poetic AAR on the Romano-Mongols here.
I have a Stellaris AAR here.
I have another megacampaign AAR (this one as Epirus). Part 1 is here.
I also have a Victoria II AAR here.
Full AAR list (with AwAARds!) is at my Inkwell

Everything is on hiatus until June. Sorry.

HistoryDude said:
Sweden was mighty, but their time is ending...

Third time is the charm, Crusade-wise...
Click to expand...

Aye, rise and fall of many more we shall see. 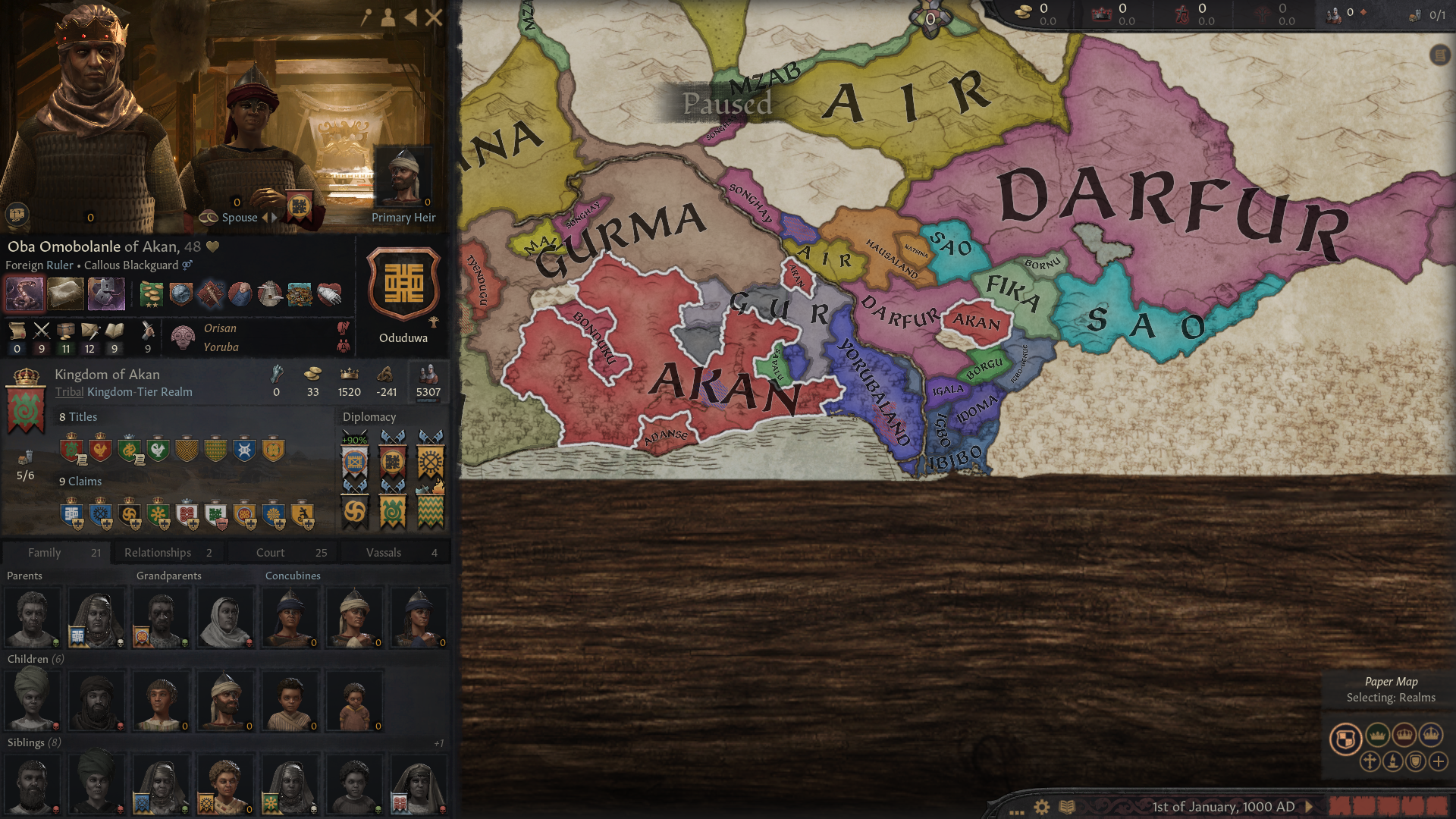 "We talked about the Yoruba people in one of our previous classes. In the 990s, the Yorubas created a new kingdom called Akan. This new kingdom, led by Oba Omobolanle Oduduwa, had split off from the main Yoruba state and expanded aggressively into its neighbors."
Show hidden low quality content
You must log in or register to reply here.
Share:
Facebook Twitter Reddit Tumblr WhatsApp Share Link
Top Bottom