Jump to latest Follow Reply
Menu
Install the app
You are using an out of date browser. It may not display this or other websites correctly.
You should upgrade or use an alternative browser.
Stellaris 43968 Bug Reports 23810 Suggestions 13935 Tech Support 2275 Multiplayer 339 User Mods 4208 Stellaris AAR (After Action Reports) Console edition 1009

I think the GC could do with some extra settings that lets players/AIs pass resolutions that makes the GC vote based on
These would be mutually exclusive so you dont need to progress through them and can vote on any at any time, though once one has been passed, another cant be passed for say 25 years.

AIs with particularly strong fleets or economies might vote for one of those related voting types, whilst particularly weak or small nations might vote for "one vote one nation". If one GC member [read: the player] is leading the way with fleet power the others might collectively vote for Pure - FP to offset their rampant voting power before it gets too large.

Yes to all, but I'd separate favours from that - these things should be reworked (using favours in voting should cause either to abstain or vote in favour instead adding diplo weight).

MateuszS said:
Yes to all, but I'd separate favours from that - these things should be reworked (using favours in voting should cause either to abstain or vote in favour instead adding diplo weight).
Click to expand...

We already change how diplomatic weight is calculated by passing the main resolution lines. I don't understand what your intention is to how your proposed resolutions interact with that - they would appear to strip away those bonuses by fiat. It seems to me that it makes quite subtle calculations pretty crude.
Toggle signature
No, no, you are not thinking; you are just being logical.
- Niels Bohr
Reactions:

mammonmachine said:
We already change how diplomatic weight is calculated by passing the main resolution lines. I don't understand what your intention is to how your proposed resolutions interact with that - they would appear to strip away those bonuses by fiat. It seems to me that it makes quite subtle calculations pretty crude.
Click to expand...

This would be a higher tier of resolutions under galactic reforms - like custodian reforms - and would suppress those effects.

Honestly the main resolution lines are too bloated, some policies have things in them that shouldnt be there. That might be understandable for real-world politics & bills, where actual consensus is important, and editing stuff in/out is a thing that happens. But in a game, it's unnecessary. It's part of why the GC is full of increase X decrease X and sanction proposals after a while.

By stuffing a dozen issues into one GC bill, you leave nuance on the cutting room floor.

Instead of having debates over just
Everything is all jumbled in to one bill. And for some unknown reason Pacifism attraction [and a LOT of it too] magically kicks in at T4 / T5 of RoW. Like, What? removing WMDs and the "atrocities" of war would only sanitise it and lead to more war in the galaxy, I'm not going to go hit the guy with a planet cracker if there's a chance he might actually get a shot off or be legally fine with purging my people if I lose territory.

Then there's the question of the AI and why it votes the way it does. Have you looked at the AI weights for these large resolutions? They're an absolute Fking mess, with 8 ethos all mixing and overlapping - and even varying in support / oppose by tiers.
Its no wonder nobody can work out which way the AI will vote (nobody's had the energy to try putting the weights on to the wiki, even, for example) and instead we see threads like (Make my federation vote my way - make my vassals vote my way -- because noone knows why whose voting for what, really).

So I wouldnt say those calculations and resolutions are subtle - I wouldn't even say they're well thought out.
I'd say it was Rushed for time and it really shows when the GC gets bogged down with confused AIs voting crap up and down repeatedly and plenty of players probably have no clue where DipWeight is coming from. ***
The GC should probably have 2-3 times as many resolution branches as it does, each one tackling one - five (at most) issues at a time.

***And I can say this with confidence, as I actually worked out Economic Weight manually once for someone to explain how it all comes together. And that's only one of the FOUR (though admittedly the largest to calculate) variables DipW uses (others being FP, Science, and #Pops * happiness of pop - or *1 if drone/nerve stapled/non-sapient machine).
It's about 2 A4 pages worth of maths and explanation, requiring me to use Excel (literally), the wiki as a base reference and then file-diving to confirm various variables. 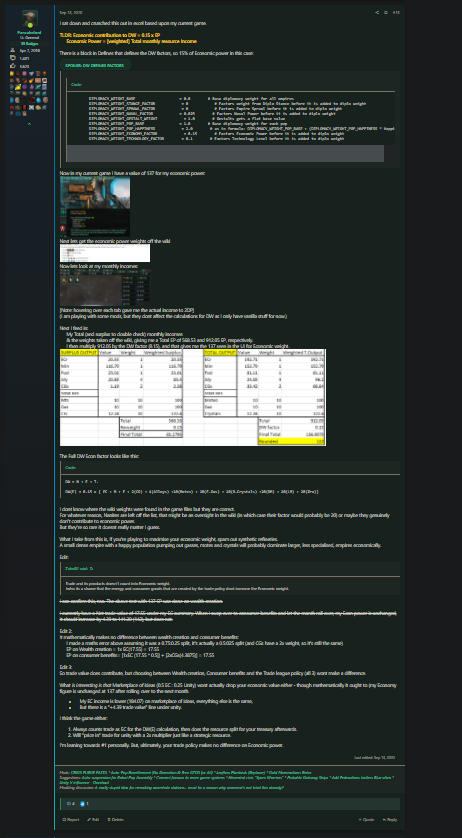 What determines diplomatic weight from Economy?

I thought that it was Trade Value, but I've also seen that it's a combined score of all of your resources (Food, Energy, Minerals, etc...). I haven't been able to confirm it either way.