Just wondering, but would there be any interest for a MLP:FiM mod for Crusader Kings 2?

Well, since people seem to be interested (I left this alone after no bites, came back a week later to see 11 pages), I guess we better start organizing!


My Little Crusader Ponies
A Mod for Crusader Kings II​
My Little Crusader Ponies is a mod intending to recreate the lands of Equestria and beyond in the turbulent times soon after the first Hearths Warming. Equestria is a Kingdome in all but name. The three tribes of Earth ponies, Pegasi and Unicorns have settled their lands and begin a new life. However will the friendships between the realms last, or will old hatreds boiled up again?

But internal problems aren’t the only threats. Form the costs come winged waders, with the bodies of birds and lions. To the north the Chrystal King has declared himself Emperor and seeks to expand his dominion. The wild beasts and tribes of the forests and deserts to the south and west test the strength of the frontiers. And across the see a new empire is rising in the name of an almighty being.

Will Equestria, freedom and friendship rise? Or will you reduce it all to ashes?


Mod Diaries:
Mod Diary 1 – An Introduction and the Map


This mod is still a work in progress. Any help with art and music as well as programmers is greatly appreciated. Please contact mrguymiah for details.
Last edited: Jun 21, 2013
Expand signature
Summer's Quick-n-Dirty Bugfixing for CM 2.2
[Mongols] are even more disappointing than the Black Death in this game.

I would certainly be, I loved the Equestria mod for Victoria II

"If you are the Sultan, come and lead your armies. If I am the Sultan I hereby order you to come and lead my armies" Mehmed II to his father and former Sultan; Murad II, before the Battle of Varna
Reactions:

Ha. I like the idea. Every game should have ponies and zombies, it seems.
Reactions:

As long as I get to be a twilight princess with 'sparkley' trait.
Reactions:

Fun fact - I finally decided to give that show a try out of sheer amazement that a pony mod showed up for Vicky II. Now GF and I are card-carrying bronies. Pony mod would be great, but doing the art assets is no small task.
Reactions:

Yes, maybe images for events will be easy: images from the serie, and fan-arts (with permission of the authors, of course). But create the portraits would be hard as hell :S
Expand signature
Finjamos que tengo algo ingenioso o divertido en la firma

How about the Mongols get replaced by a horde of brightly coloured Ponies hellbent on spreading Love and Tolerance everywhere?

Beric Dondarion said:
I won't even express my disgust.
Click to expand...

But you actually did

I was wondering if somebody would start up a mod based on this. I couldn't do it, because the CK2 files confuse me, but I say full steam ahead on the Ponymod
Expand signature
The Traveler's Tale - A Skyrim Tale - join the Traveler as he tries to make his way in a frozen land beset by organized banditry and large predatory felines! (Dead due to save loss. Sorry, all)

"There is no worse tyranny than to force a man to pay for what he does not want merely because you think it would be good for him."
-Robert Heinlein, The Moon is a Harsh Mistress

htilden42 said:
How about the Mongols get replaced by a horde of brightly coloured Ponies hellbent on spreading Love and Tolerance everywhere?
Click to expand...

If you don´t love and tolerate them, they will kill you and your family. Until everyone love them XD
Expand signature
Finjamos que tengo algo ingenioso o divertido en la firma
Reactions:

Clophiroth said:
If you don´t love and tolerate them, they will kill you and your family. Until everyone love them XD
Click to expand...

I'd rather swear fealty to the Fatimids.
Reactions:

XRW said:
I'd rather swear fealty to the Fatimids.
Click to expand...

I'd do it twice over =S
Expand signature
Servant of the Dark, Restorer of The Light
The mod's a mod and since it's a mod it goes to the mod subforum.
​- Darkgamma

Better would be assaulting enemies with cake
Expand signature
(Used to be a) Co-developer of the Community Shattered Europe mod
Version 0.1.1w released (2013-07-11)
MOD DEVELOPMENT SUSPENDED UNTIL FURTHER NOTICE 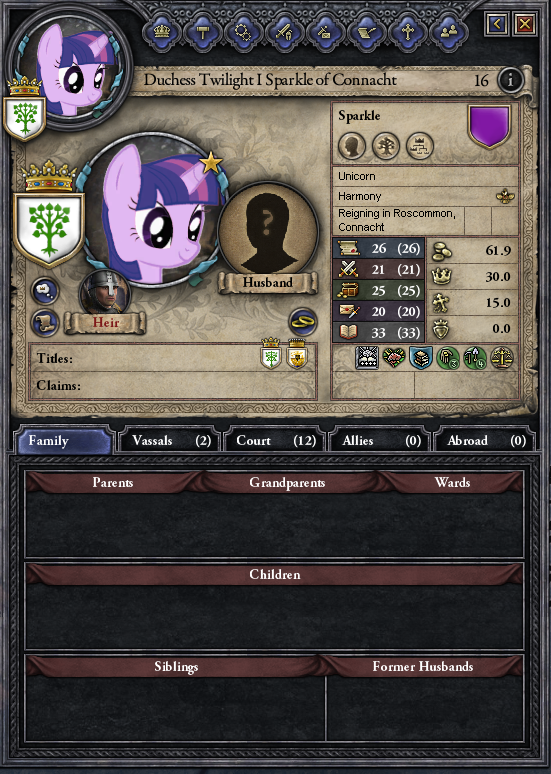 Stop forcing your 'love for ponies' on everyone else, you are nothing more than furries with a moe-fetish.
Expand signature
Tired of boring Asian countries? Try the Asian Renovation Mod for EUIV today! Steam Workshop Pastebin - Out of date
Reactions:

Bloodmerchant said:
Stop forcing your 'love for ponies' on everyone else, you are nothing more than furries with a moe-fetish.
Click to expand...

It's a flipping mod idea, so saying that they are forcing anything on anyone is completely retarded.
I feel that the Paradox Forum community is getting worse than the TW community, which is horrible.
Reactions:
Show hidden low quality content
You must log in or register to reply here.
Share:
Facebook Twitter Reddit Pinterest Tumblr WhatsApp Email Link
Top Bottom