Menu
Install the app
You are using an out of date browser. It may not display this or other websites correctly.
You should upgrade or use an alternative browser.
Imperator: Rome 7690 Bug Reports 3170 Suggestions 1954 User Mods 517 Tech Support 453 Multiplayer 47 After Action Report (AAR)
Show only dev responses

Hello and welcome to this weeks developer diary!

Today I will be returning to the matter of Trade, Diplomacy and to the geopolitical setup of the British Isles.


Trade​
Trade is a subject that is integral to this era in many ways. Flow of goods and people over the Mediterranean is the primary reason it was natural for an empire to form around it. This is how this sea could ever conceivably become Mare Nostrum, or “our sea”, to the Romans.

In Imperator Trade is not limited to something you conduct to make money, it also ties into the other systems in the game.

So before I move on to the things we have adjusted with this system I will reiterate what we have touched upon in previous diaries about Trade in Imperator. I will also be using Grain as an example: 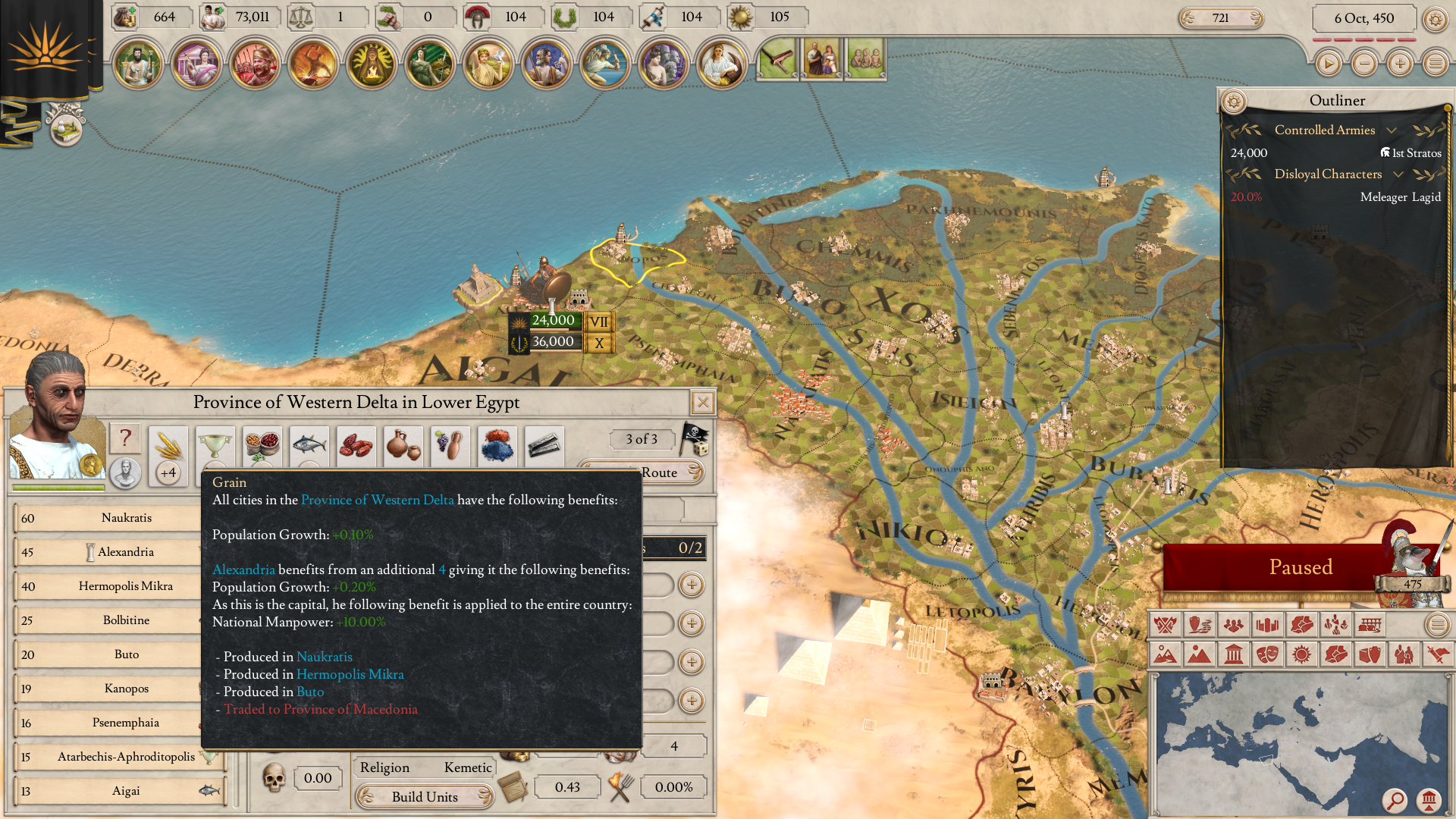 Trade Good bonuses are dependent on the type of Good and they come in a wide variety. This allows you to tailor your provinces, and even more so your country, to your needs and desires by controlling what you produce and where you ship it.

Last but not least each active Trade Route creates Commerce Income in your province, which may add up to quite a bit of money if you have many active routes. 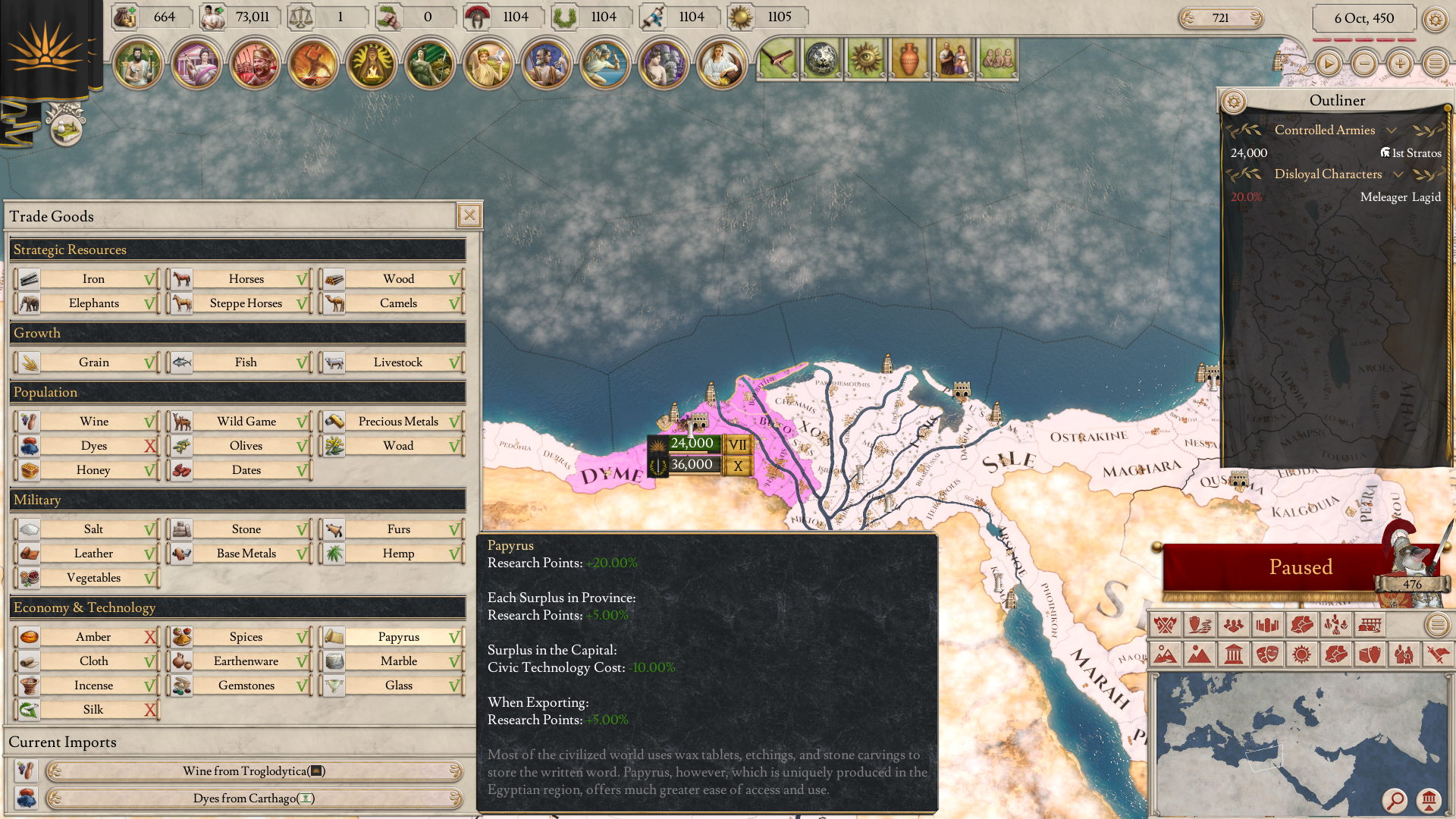 We have divided our Trade Goods into functional categories to reflect their effects:


By mixing and matching which Trade Goods you import, you can decide what kind of country you want to build.
By importing Strategic and Military goods you could build stronger and cheaper armies.
A mix of Growth and Population Goods would allow you to build a stronger internal economy, with more productive and prosperous population.
Technology boosting goods for greater scientific leaps.

And of course any mix of the above. Some things might not be as obvious, a country that conducts a lot of expansion may well see the need to focus on the Population Goods such as Wine, Olives and Precious Metals, to keep the recently conquered foreign populations happy. 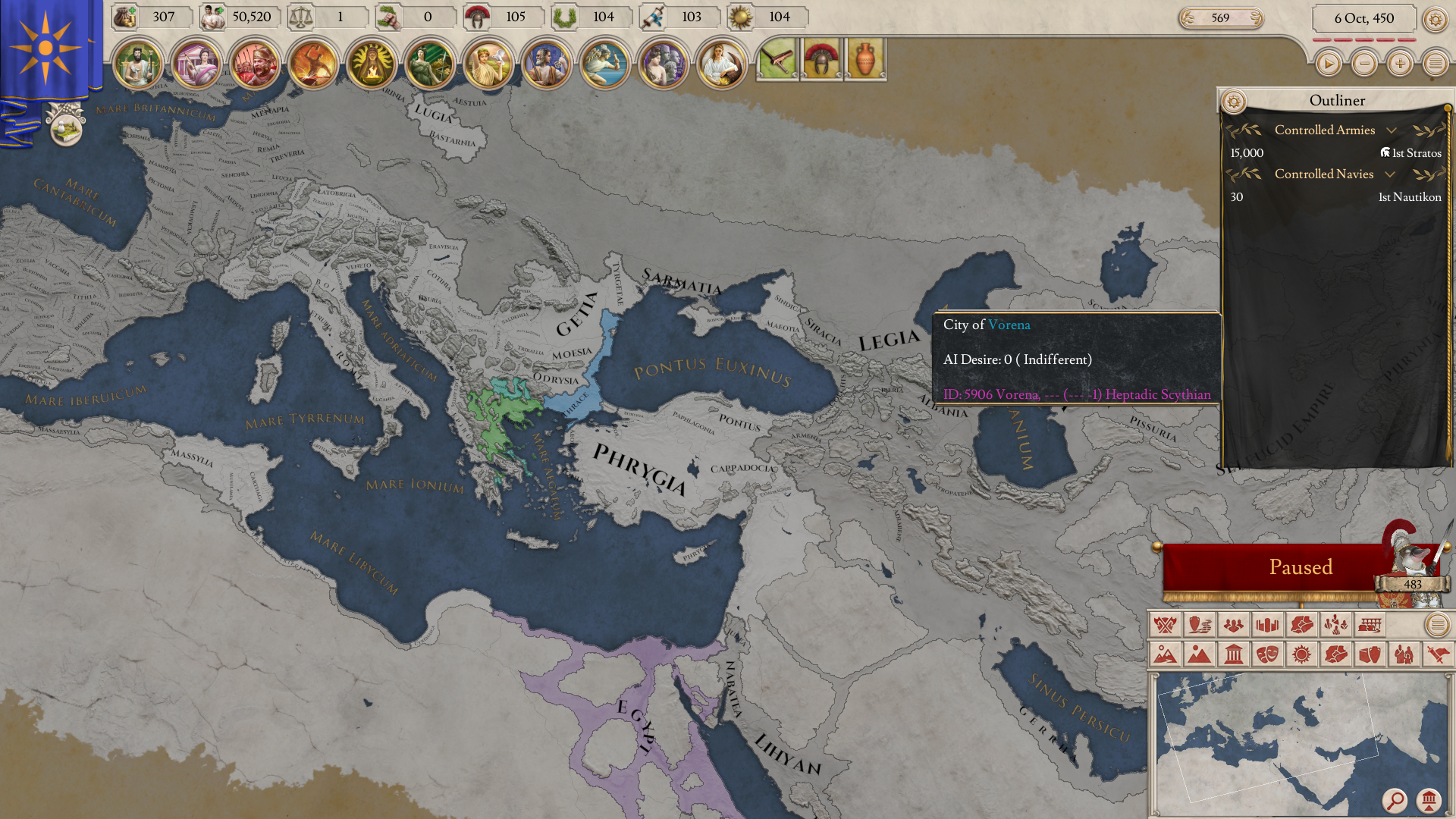 The Mediterranean world was in some ways very interconnected, but travel time, reputation and maintaining diplomats for long distance diplomacy for a small country would not have been easy.

In order to conduct most Diplomatic Interactions except for declaring war, military access, and suing for peace, will be limited by your Diplomatic Range.

The Maximum Range is modified primarily by how high your Rank is, but it is also modified by inventions. An overlord and a subject will always be considered to be within Diplomatic Range of each other.

Powerful and advanced countries will thus be able to perform far reaching diplomacy, while smaller states will be more limited to their immediate area.

Exports:
​
We only touched briefly on export in the previous diary on trade, and what we did mention has changed. There are no longer any general Trade Access treaties. Rather than making you sign one deal to get access to all the Trade Goods of a country you will now be able to ask any country within diplomatic range to be allowed to import something they have a surplus of.

Likewise other countries will be approaching you for the right to import your Trade Goods.

So why would you agree to export something when there are so many nice benefits from stacking things inside your own country? 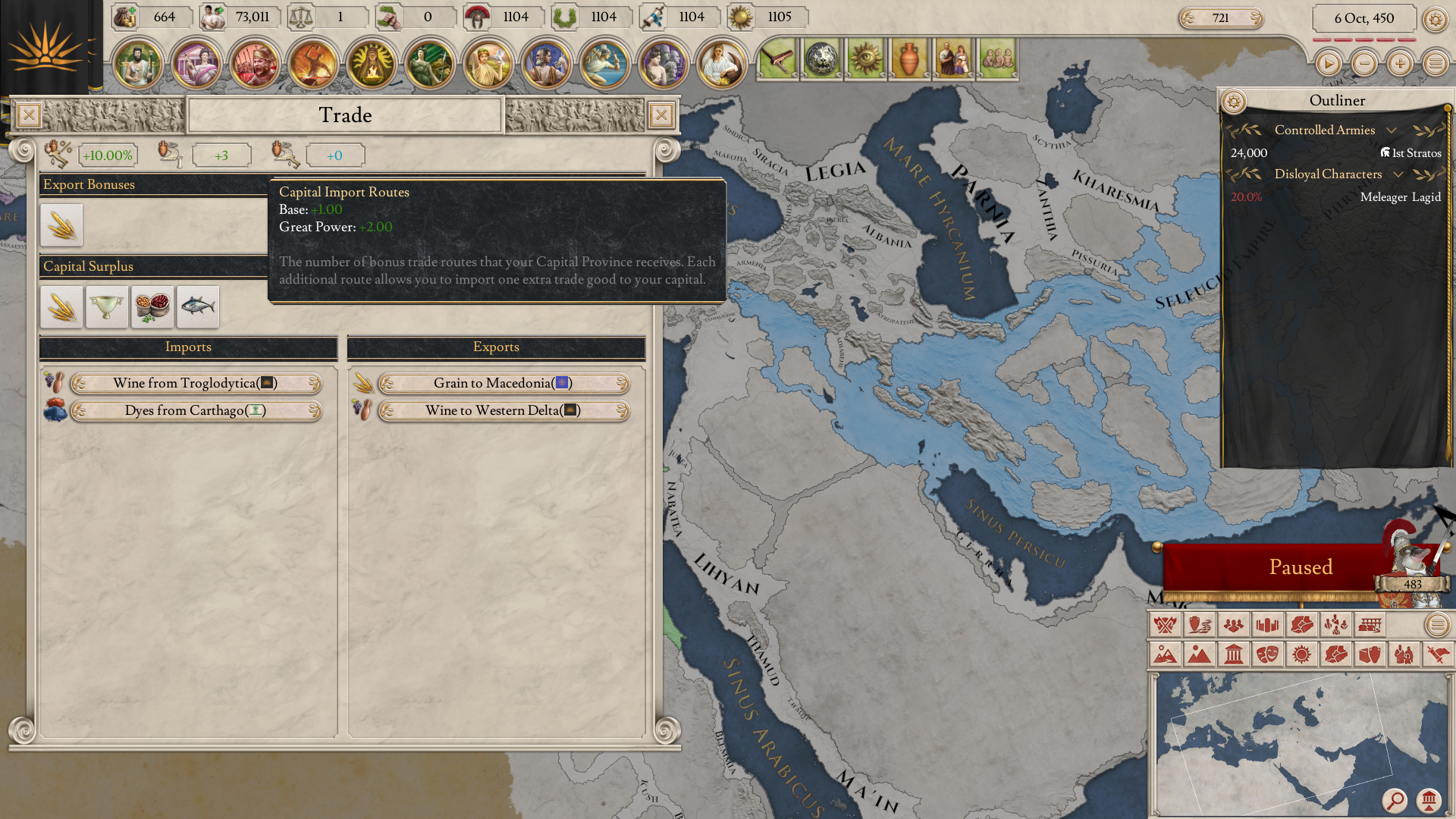 To start with there is an economic incentive. The amount of Commerce from international trade is much higher than that from internal trade routes. Meaning that exporting can net you much higher income, especially if you do it from somewhere with good modifiers to commerce (such as a province with many high happiness Citizens and Markets).

Secondly there is a fourth modifier to be had for exporting a Trade Good. For Grain, our old example above, this would be +5% National Manpower.

Taken together this means that export is sometimes quite a bit more lucrative than using your own import routes to move Trade Goods around within your own country, though there will of course still be situations where you may prefer not to export a Trade Good that would benefit a neighbor more than you are comfortable with. 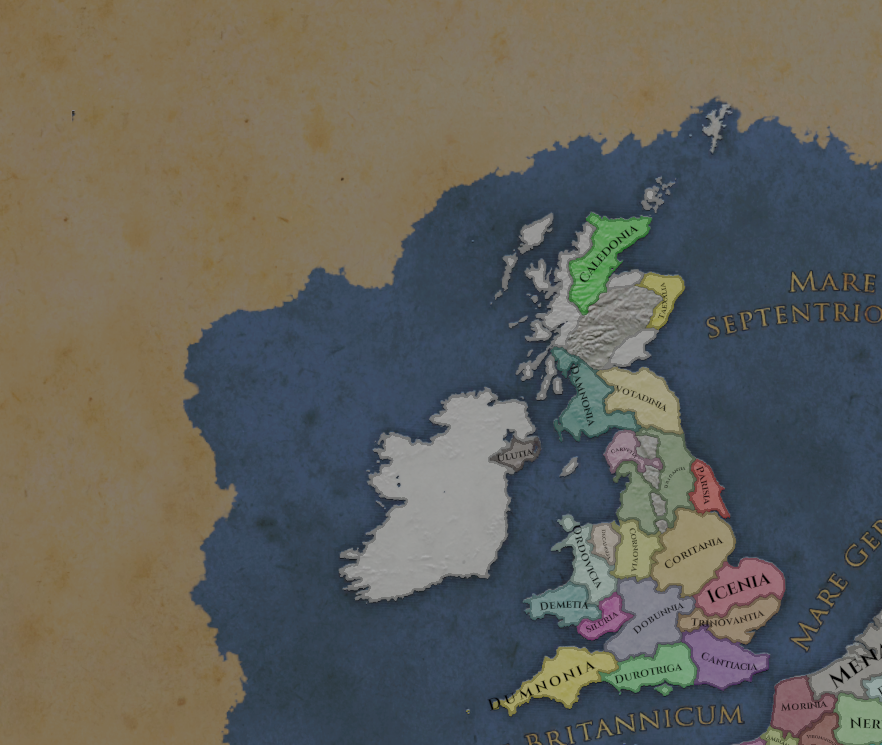 ​
As we move on into territory that is further from the Mediterranean we are now approaching lands of which we know far less. The British isles were by no means unknown to the ancient world, most recently the islands were supposedly visited by Pytheas of Massilia.

Of Pythias works however very little remains, and we only know them from what others have written about them. So for most cases we have had to extrapolate what information we do have backwards.

What we do now, from written sources as well as archaeology, is that the British isles were undergoing a period of growth and wealth. Rich in iron, base metals and even gold, these islands were also good agricultural land and are described as exporting grain and cattle.

Southern Britain would also have been in somewhat close contact with Gaul to the south, commercially as well as politically, and would in time come to receive increasing numbers of Gallic and Belgic tribesmen. 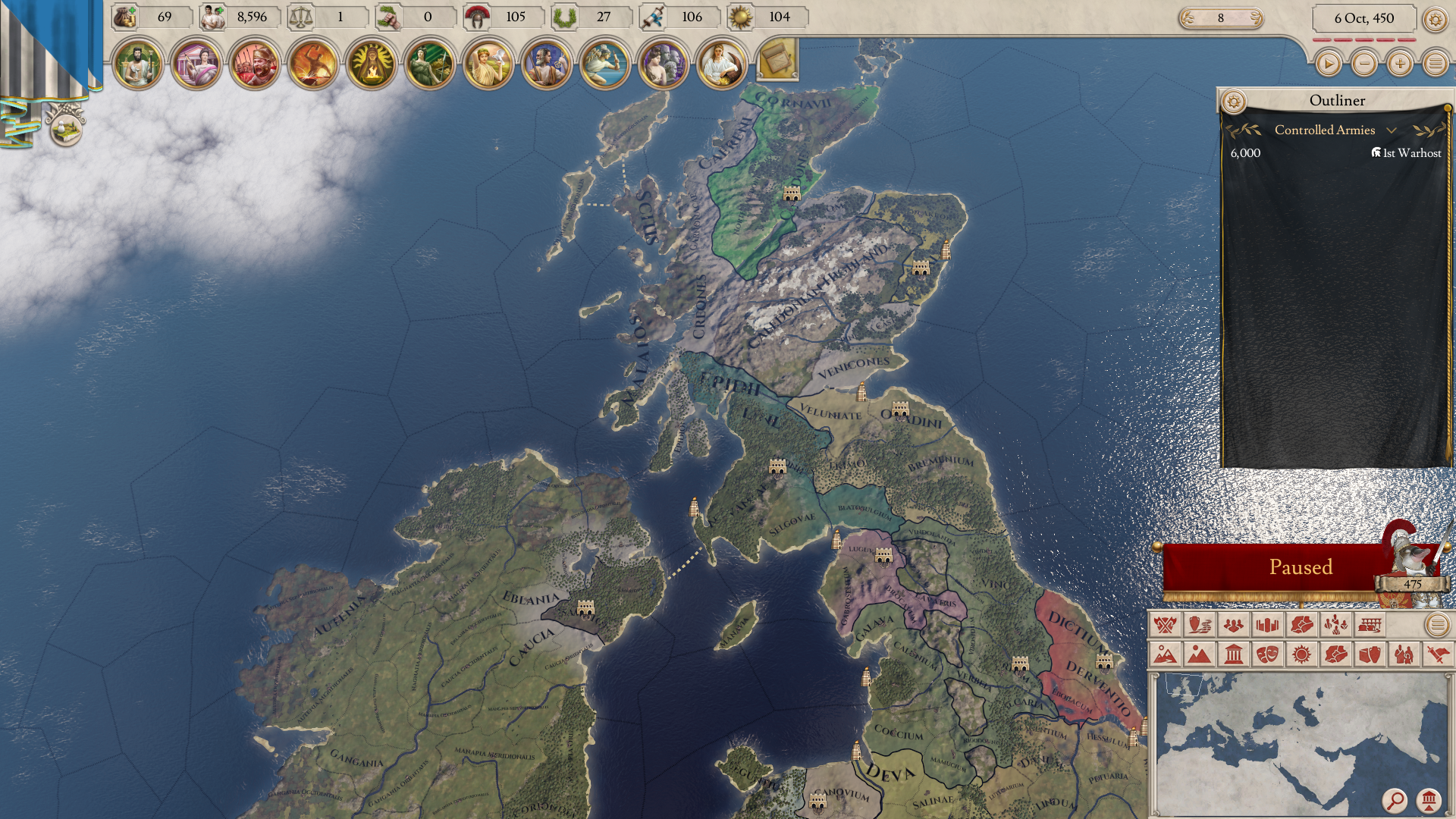 ​
As in Southern Britannia there are scant sources for this region. The north was only partially subdued by Rome and so we have even less to go on here in some ways.

The southern part of this region is home to the strongest of the Pretani states, while the far north of Caledonia has a number of resilient Pictish kingdoms, in between some unowned (but populated) stretches of land.

As in the south the region had seen the rise of societies around strong hill forts, and is home to a number of growing cities in the Lowlands and Northern England. 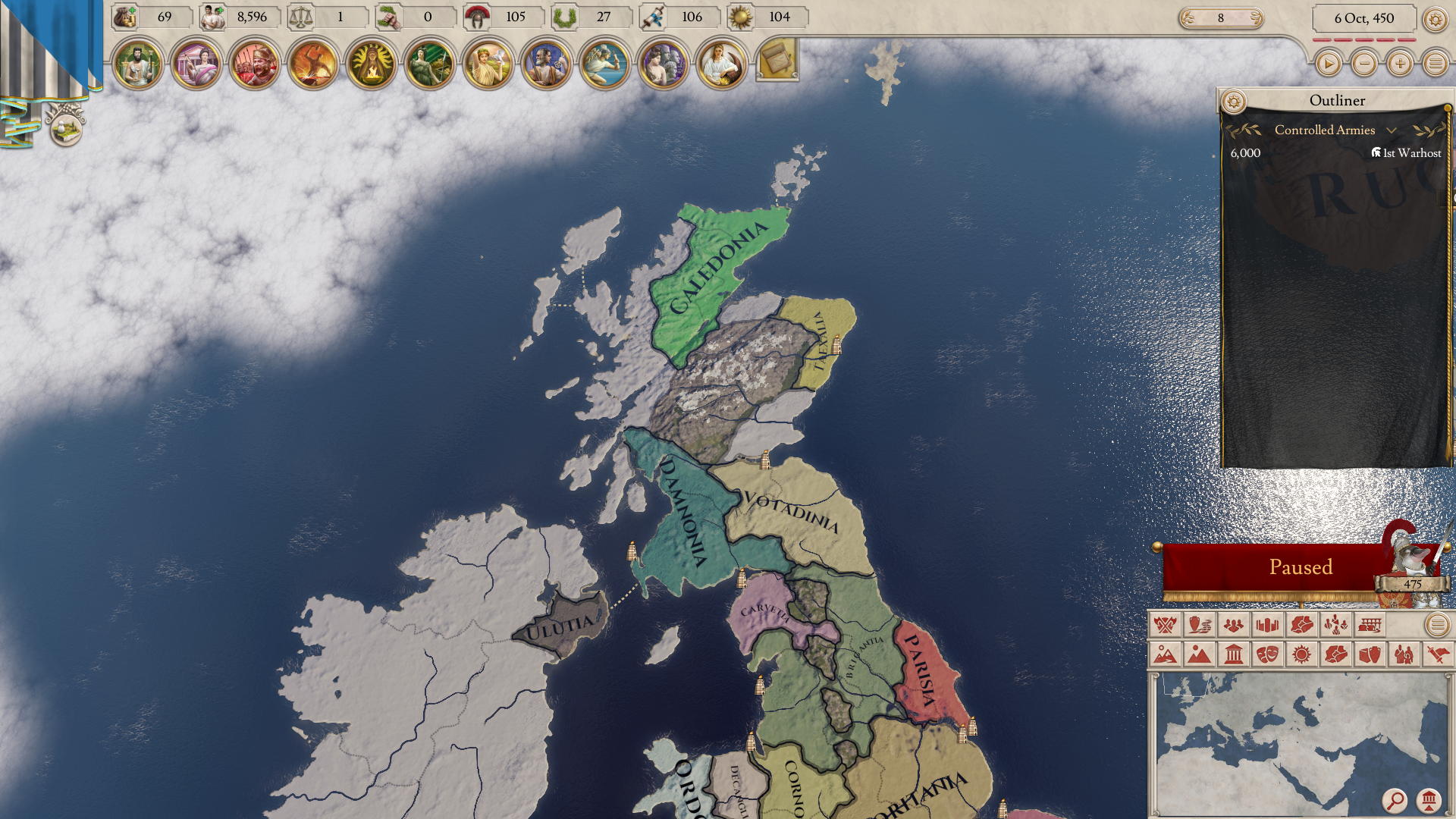 Yay
Toggle signature
"Romans, hide your wives! Here comes the bald, adulterous whore. We f*cked away your gold in Gaul, and we've come back here to ask for more"
-Ceaser's soldiers during his triumph.

only in that province (which is any of 10-12 cities)
Toggle signature
Johan Andersson
Studio Manager Paradox Tinto - Follow me at Twitter!

Can you export a good that you have imported, and are deals cancelled if you reduce production?

May I ask what the reason for the uncolonised Ireland is? I mean all of those tribes were mentioned by Ceasar and even later, so by that standard I see no reason to exclude those coastal Irish tribes. Or is there archeologic evidence the Celts settled there after 300 BC?
Last edited: Dec 17, 2018
Toggle signature
"In signum concordiae patris ac patriae MDCCCVI.
Nec temere, nec timide.
Cui non civium servitus tradita, sed tutela."
-
Furor Teutonicus - The Archaeology and Tribes of the Ancient Germanics
On the Boii, Vindelici, Raetians and "Germania"
The Celtic invasion of Greece and the Celts in Pannonia and Transylvania
Heritage Suggestions for some European Barbarians
All suggestions are incorporated into this mod:
Imperator: Barbaricum - 1.4.x​

Cool! That's what I was hoping for!

Is the diplomatic range in any way modified by terrain and waterways? Nation A and B would be able to maintain good relations if separated by 1000 km, if those were ocean or navigable rivers, but perhaps only 200 km of inhospitable desert.
Toggle signature
CK3 Mod: Sunset Invasion

Can you guys add the option to trade slave pops? I would love to play as a babarian that raids and enslaves his neighbours to sell their pops for a profit. aswell as play as pacifist athens that boosts its production by buying foreign slaves.
S

The Mediterranean world was in some ways very interconnected, but travel time, reputation and maintaining diplomats for long distance diplomacy for a small country would not have been easy.

In order to conduct most Diplomatic Interactions except for declaring war, military access, and suing for peace, will be limited by your Diplomatic Range.

The Maximum Range is modified primarily by how high your Rank is, but it is also modified by inventions. An overlord and a subject will always be considered to be within Diplomatic Range of each other.

Powerful and advanced countries will thus be able to perform far reaching diplomacy, while smaller states will be more limited to their immediate area.
Click to expand...

Great DD! A couple of questions:

As a Scot myself, this is the dev diary I've been waiting for the most.

Oh wait, that isn't a thing yet.

No next DD teaser?

Question unrelated to this DD; will there be popular independence revolts? We know that disloyal governors will attempt to break away, but if pops in an area are unhappy enough, might they revolt to gain independence? For instance, the Maccabean Revolt DEFINITELY wasn't a governor trying to break away; it was a popular uprising. Are those in the game?

I was expecting more playable tribes in Ireland, but I guess it makes sense.
Toggle signature
My suggestions about 1066 and 867 Iberia (Crusader Kings 3)

I'm glad you decided to add an Irish faction. I thought it would have been quite strange if Ireland had started off without any faction and just as a vehicle to be colonised by other factions.

Can I make a few more suggestions?

Ptolemy calls Ulatia, Uoluntii, which etymologically makes a lot of sense since n before dental consonants disappears from Primitive to Archaic Irish (hence why cét is a cognate for the Latin cent).

Ptolemy lists a number of other powers that seem to have eventually dominated the kingship of their respective provinces and may have created the provincial kingship in the first place.

Iverni (the Érainn of Munster who would eventually cede power to the Eoghanacht dynasty in the 6th/7th centuries).

Brigantes (the origins of the Leinster kingship perhaps. It's notable that some legends have St. Brigid appearing above Leinster armies before battle, like a tribal sovereignty goddess).

Magnate (Possibly related to Ól nEcmhacht, the original name of Connacht before the descendants of Conn Cétchathach took over).

Each of these could be represented as you did with the Ulatia, small tribes coastal in a sea of uncolonised surroundings poised to establish and consolidate provincial kingdoms.

All of these smaller tribes have me wondering if the game will have the ability to form new countries like older titles. I really loved to do that before but I don't know if it would really work in this case.

I really hope we'll be able to rename both cities and provinces. It would add quite a bit of flavour when conquering and/or colonising new lands.

IndigoRage said:
All of these smaller tribes have me wondering if the game will have the ability to form new countries like older titles. I really loved to do that before but I don't know if it would really work in this case.
Click to expand...