Jump to latest Follow Reply
Menu
Install the app
You are using an out of date browser. It may not display this or other websites correctly.
You should upgrade or use an alternative browser.
Europa Universalis IV 78634 EUIV: Suggestions 17569 EUIV: Technical Support 6292 EUIV: FAQ & Strategy Guides 211 EUIV: AAR's, Let's Plays, and Fan Fiction EU IV: Alternate History Short Story Contest Contr 28
Show only dev responses

This is Trin Tragula, Content Designer on EU4, and as I said last week, today I will be talking about what changes we have coming for the map and general setup of the Caucasus and Anatolia. These changes will be coming as part of the 1.23 patch which is currently in development.


Southern Caucasus - Lands of the Black and White Sheep
​ 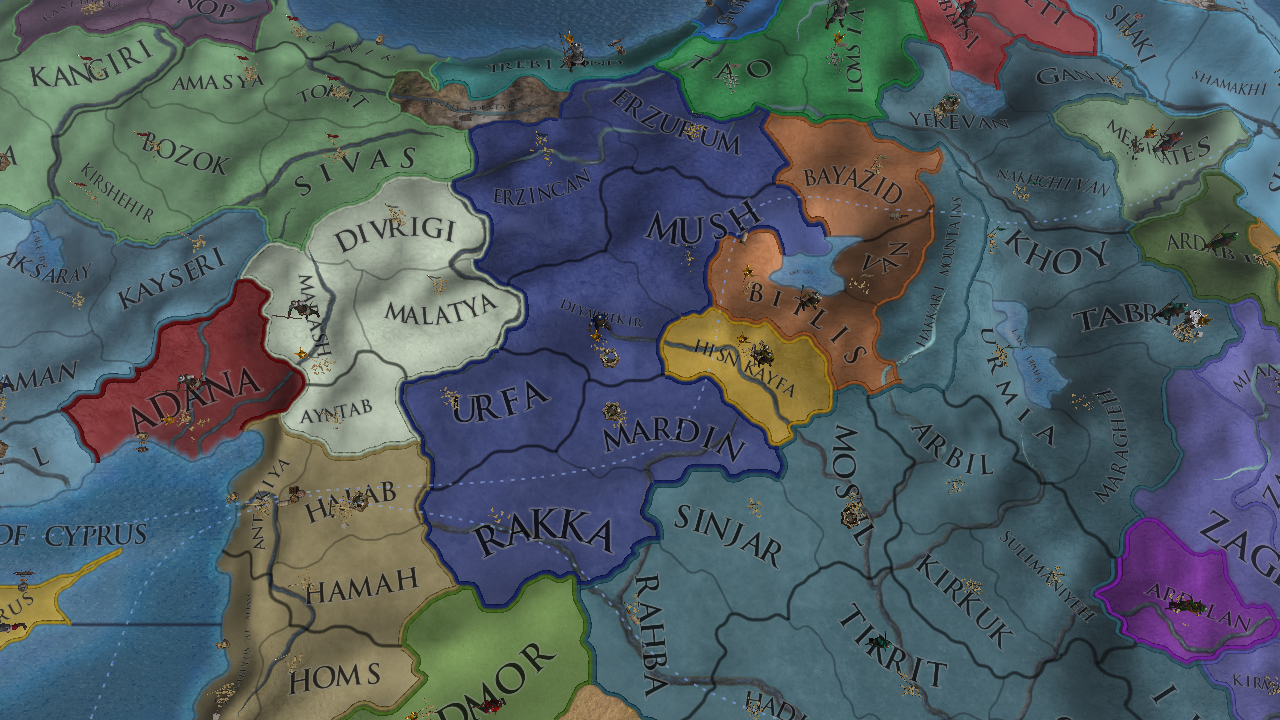 In 1444 the Timurid conquest is still in fresh memory in Eastern Anatolia, the southern Caucasus and northern Iraq. But in the years following Timur’s death many things have changed. Timur’s son, Shah Rukh, has managed to reunite and hold together the Empire in the east. But here, in the west, powers that Timur had once defeated have now arisen again to fill the vacuum.

The Qara Qoyunlu, or the Black Sheep Federation, has conquered most of Iraq, Azerbaijan, Kurdistan and Armenia. Defeating their old enemies the Aq Qoyunlu and their old allies the Jalayirids. Under the rule of their most famous ruler, Jahan Shah, the Qara Qoyunlu have fought multiple wars against the Timurids and Shah Rukh. Wars that have ended with Jahan Shah being named a "vassal" of the Timurids and governor of the western lands in their name. In practice however the Timurid have very little influence over the Qara Qoyunlu and whenever Timurid rule weakens the Black Sheep eat more of the Timurid domain.
The Qara Qoyunlu have many enemies of their own and much of their empire is ruled by loosely controlled vassals, from the Melikdoms of Christian Armenia to the shores of lake Van.
Their old enemies in the White Sheep federation, Aq Qoyunlu, still control land in eastern Anatolia but are currently locked in a lengthy and destructive succession war.
Further west both the Ottomans and the Mamluks are eager to reclaim land and extend their spheres of influence into northern Iraq and Armenia

In patch 1.23 we have wanted to make the rivalry between the two Sheep federations and the rise of minor powers in Kurdistan, Azerbaijan, and Armenia more interesting and engaging. By adding more detail to the map we have been able to better represent the influence of the Aq Qoyunlu at start as well as the more loose nature of the Qara Qoyunlu Empire. 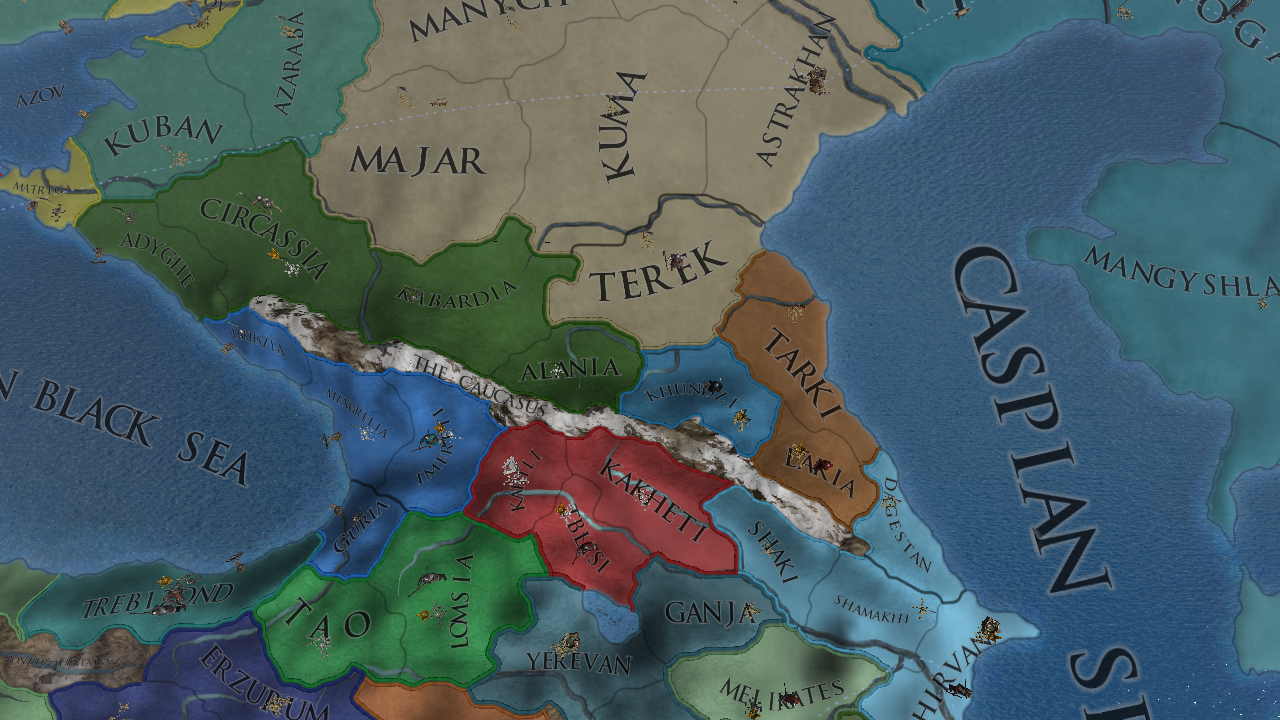 The region around the Caucasus range is dominated by the ancient Christian Kingdom of Georgia.
Following the death of Timur the Georgians, under king Alexander I, have been able to rebuild their kingdom. The Caucasus is not a safe region however, Georgia has strong regional nobles and dangerous neighbors. In 1440 the Qara Qoyunlu sacked Tbilisi and devastated the Georgian countryside. In hopes of keeping the kingdom together Alexander has named his sons co-rulers, with the Georgian regions controlled by Georgian princes.
Just before our game starts, in 1442, Alexander I retired to a monastery and left the governance of his kingdom entirely to his sons. An uneasy peace exists but the his sons as well as the powerful nobles in southern Georgia, are all taking steps for the civil war everyone knows will come.

The Caucasus has been given a number of new provinces and a bit of a development boost to better reflect the resources and population of the region. The seeds of turmoil in Georgia is now represented by a modified setup where the Georgia tag now controls the lands of Kartli and Kakheti from the start under king Vakthang, but Imereti under Co-King Demetrius has been made a state of its own and will have to be subdued if Georgia is to establish direct rule. In the south one of the more powerful families of the realm, the Atabegs of Samtskhe, have been granted such far-reaching privileges that we now represent them as another state of their own. Georgia has great potential but the realm must be united under one strong ruler if they are to prosper and survive rather than splinter further and be marginalized.
In the east and north we have added detail to the Shahdom of Shirvan and their Caucasian neighbors. Shirvan is now much stronger and in 1444 includes Shaki, which was ruled by the son of the reigning Shah in 1444.


New Formable:​
Anatolia - The Ottomans and the Turkish Beyliks​ 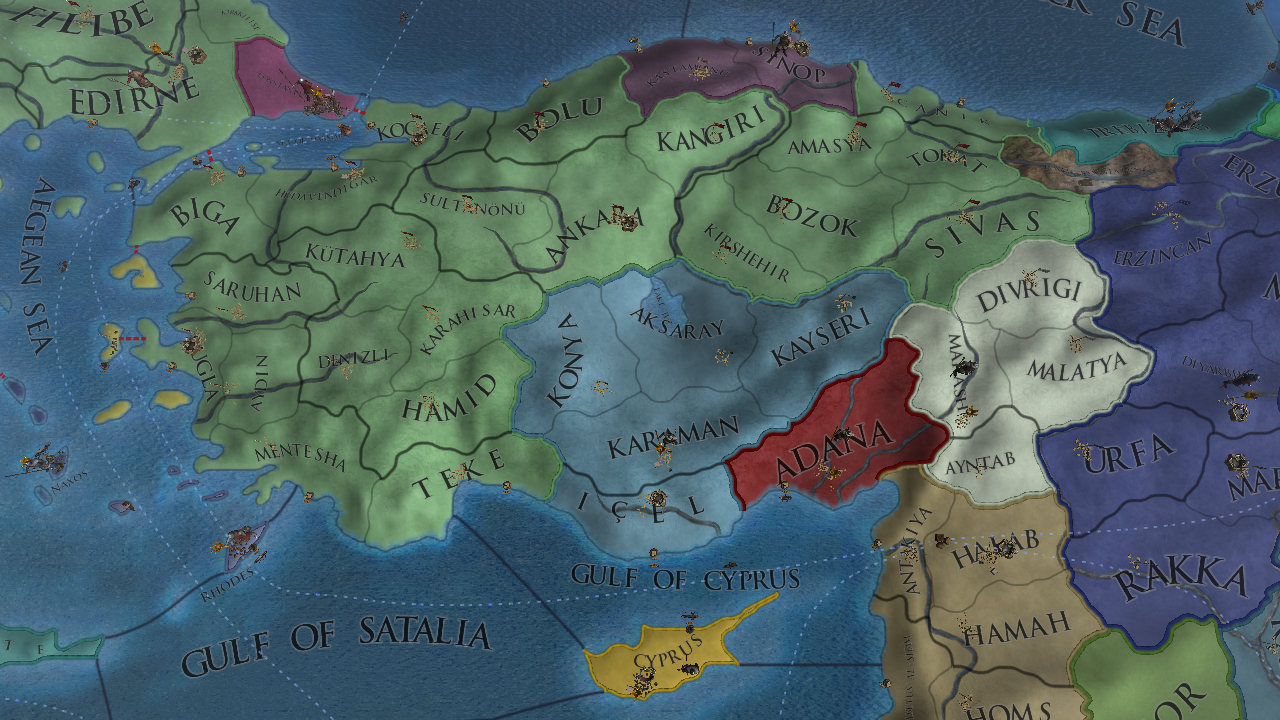 In 1444 the Ottomans have recovered from the Timurid disaster and weathered the Crusade at Varna. The political setup of Anatolia is already quite detailed in the release version of EU4 but we have redrawn the region to add more detail and better reflect its historical divisions.
We hope that this will also make the area more interesting, not only for the Ottomans, but also for the other Turkish Beyliks, some who have received more land to better reflect their true influence in 1444.

In addition it is now possible for a successful Turkish Beylik that defeats the Ottomans to claim the title Sultan of Rûm, among other things this will give them the Ottoman government form (and the Harem mechanic for owners of Rights of Man), as well as access to some other content normally reserved for the Ottomans such as the decision to move the capital to Constantinople and claim empire rank.

New Formable:​
That was all for today! We hope you will like these setup changes and next week we will be back to tell you more of the changes to the Timurid heartlands in Iraq, Azerbaijan, Iran and Khorasan...
Toggle signature
No fighting in here! This is the war room!

I'm loving all these map changes, Can you show a slightly zoomed out picture so we can see country names?

Possibly a pass could be added between Alania and Kakhetti
Click to expand...

I think you're right. More for game play purposes, though there is a road there now. I wonder if that was a pass used historically.
Toggle signature
"I and my companions suffer from a disease of the heart which can only be cured by gold" Hernan Cortes

I wonder how many of those provinces are now Ottoman cores. In the old situation, Ottomans would still have reconquest cb's on all of Karaman, Candar and some provinces of AQ and the province of Divrigi. I can't remember they still have a core on Adana. Assuming no new cores are created, Ottomans can no longer declare reconquest cb on QQ, but if Syria is released, quite a ton of new cores can be taken back again. In general, I wonder how large the Ottoman development boost will be and how much it will influence the region. If the entire Anatolian region becomes relatively stronger, we might actually see an even stronger Ottoman empire. I don't mind having nations like France and Ottomans around as end game challenges, but this might actually push it over the top? Again, not sure how much of a boost this will give, but I hope it's not too much.
Toggle signature
Tryharding games like Europa Universalis 4 in a casual manner.

So, is it an Ottoman buff or nerf?

I hope there are some mechanics in check of the Ottomans, otherwise I foresee AI Ottoman WC. With all those new provinces and the addition of many new OPMs/minor powers, it seems like the Ottomans will gain a new strong (nearly) undeniable power base.
Toggle signature
Furor Teutonicus - The Archaeology and Tribes of the Ancient Germanics
On the Boii, Vindelici, Raetians and "Germania"
The Celtic invasion of Greece and the Celts in Pannonia and Transylvania
Heritage Suggestions for some European Barbarians
-
"In signum concordiae patris ac patriae MDCCCVI.
Nec temere, nec timide.
Cui non civium servitus tradita, sed tutela."​

gigau said:
Possibly a pass could be added between Alania and Kakhetti.
Click to expand...

This one? Historically it wasn't used before the end of the timeframe of the game though.

hmmm ... so it seems like the time window to do something against the ottomans will be wider, but if you don't use it they will be even stronger

considering how the AI wages war and the lack of hostility towards the turks, i'd say its an ottomans buff

This one? Historically it wasn't used before the end of the timeframe of the game though.
Click to expand...

No, i was thinking about the muuuuch earlier trade route crossing the Caucasus, through Ossetia, which allowed the rise of the kingdom of Alania (again prior to the game's timeframe, i know). It did allow the Alans a foothold on the Georgian side of the Caucasus.
Toggle signature
• Project Lead for M.E.I.O.U. and Taxes
• Subforum | Steam Workshop | Discord | Facebook | Twitter | Cartographer's Office

Will there be new unique NHEs for QQ, Georgia, Armenia, and the general region the Caucasus now? Along w/ event to simulate their decline and collapse?
Toggle signature
Hearts of Iron IV:
Also Check out my Suggestion to Fix the US Presidency in HOI4
Expanded News Events
Greek Political Parties Suggestions
Byzantine Emperor Suggestions

Trin Tragula said:
this will give them the Ottoman government form
Click to expand...

Will the government still be called as Ottoman Government if playing with a different country other than Ottomans?

That Ardabil has Persia's colors! I wonder how the new Persia will look?
M

So how much stronger did the Turks got? In terms of total development.
Toggle signature
Sit now there, and look out upon the lands where evil and despair shall come to those whom thou allied. Thou hast dared to mock me, and to question the power of France, master of the fates of Europe. Therefore with my explorers thou shalt see, and with my spies thou shalt hear; and never shall thou be released from vassalage until all is fulfilled unto its bitter end.

The purple region we saw in the last dev dairy seems to be bigger than just Khuzestan. Timurids split up into two factions maybe?

Great changes, only a little disappointed that nothing seems to be done to Ottoman-Greece. All in due time, of course.
Toggle signature
Fighting for a good map since 1444.

Mingmung said:
The purple region we saw in the last dev dairy seems to be bigger than just Khuzestan. Timurids split up into two factions maybe?

Great changes, only a little disappointed that nothing seems to be done to Ottoman-Greece. All in due time, of course.
Click to expand...

It's a different purple than the other one. Looks like western Persia has been Balkanized just a bit.

The best in that is ... There is even more to come
Toggle signature
English is not my native tongue, sorry for the mistakes.