Hello there! I hope everyone’s summer is going well, and that you are as excited for this week’s Dev Diary as I am to write it!


Keep in mind that not all the changes are finalized, so there might be more updates before everything goes live. All the pictures will be taken from 1066 and with De Jure map modes, so things might look somewhat different in other bookmarks. 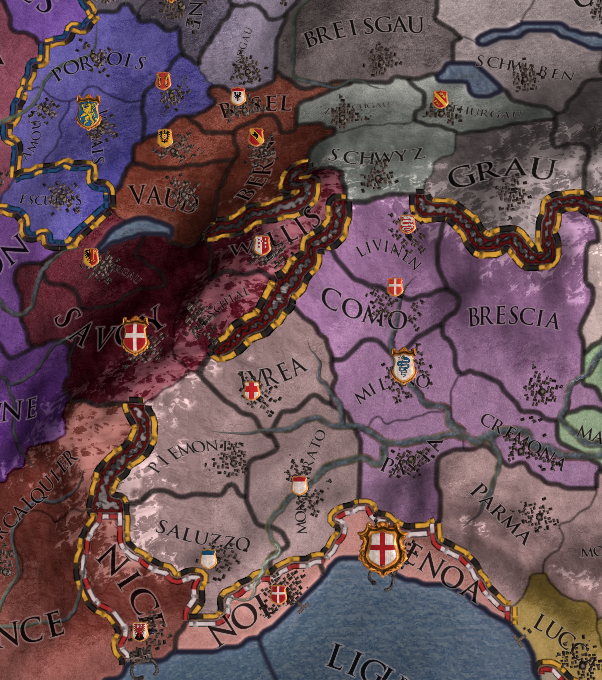 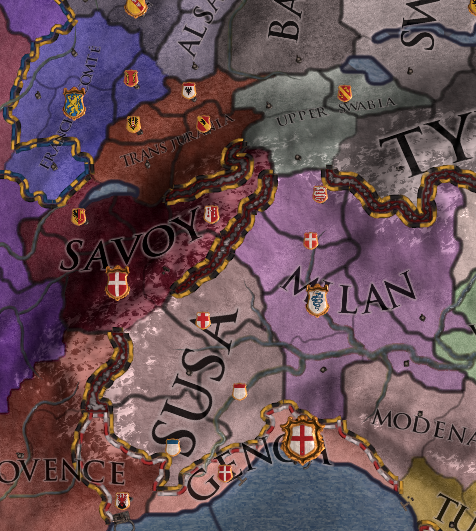 So the first change we will be talking about is the changes to the County of Burgundy. We have cut it up, and made it into its own Duchy (of Franche Comté). The old Duchy of Upper Burgundy has lost its headway into the Swiss heartlands as well, moving the county of Schwyz (old Grisons), Zurichgau (old Schwyz) and Thurgau (old St. Gallen) into the new Duchy of Upper Swabia. In the later starting date, they will be part of the Duchy of Switzerland instead of Upper Swabia, a change that can happen throughout a game as well.

The county of Vaud has been added to the game, to the old Duchy of Upper Burgundy, cut out of certain parts of Geneva and Neuchatel. The final noticeable change on this side of the Alps, is that we have added Aosta to the mountains between Savoy and Italy. 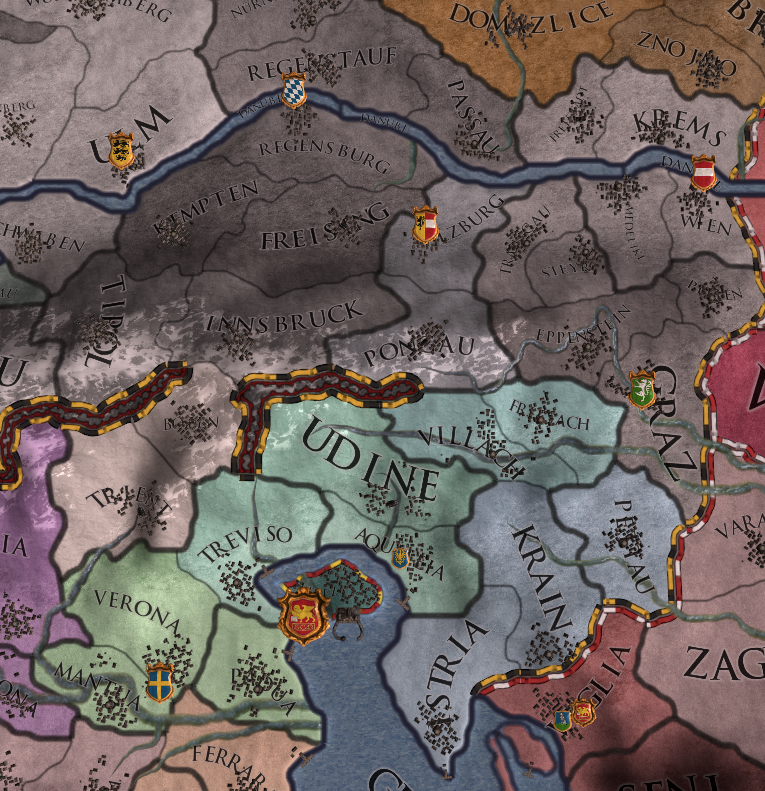 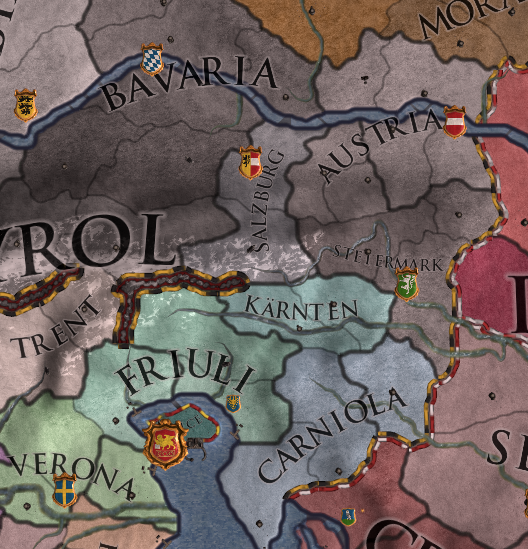 We can start out in Italy, where we left off from the previous picture. Trent has been turned into its own minor Duchy, opening up Brenner Pass between Bozen and Innsbruck. Innsbruck and Tirol has moved a bit westwards, to make room for Pongau as part of the new Duchy of Salzburg. In Bavaria, we have added the county of Regensburg, as it was the capital of the Duchy for quite a while, and we wanted to see that reflected in the game. Passau has also been moved into the Duchy.

To the east, Austria has gotten quite the rework. We have added Traungau, Steyr Freistadt, Krems and Melk as Counties, moved Znojmo into Bohemia and Passau, as previously mentioned, into Bavaria, and Styria has been moved south into its own Duchy. The Duchy of Carinthia has been cut up into Carinthia and Carniola, and the Duchy of Friuli has been added around Aquileia. 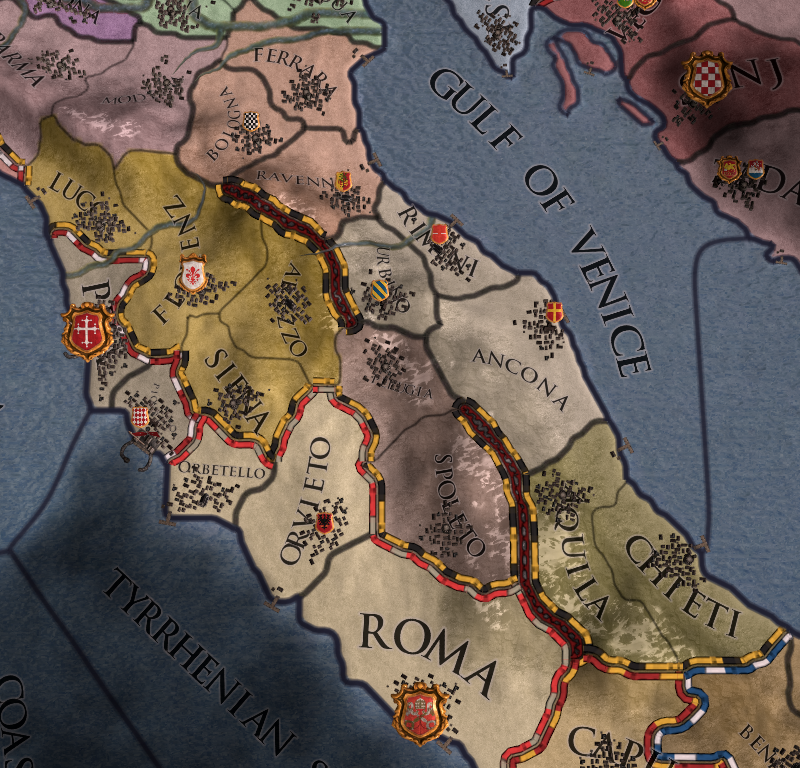 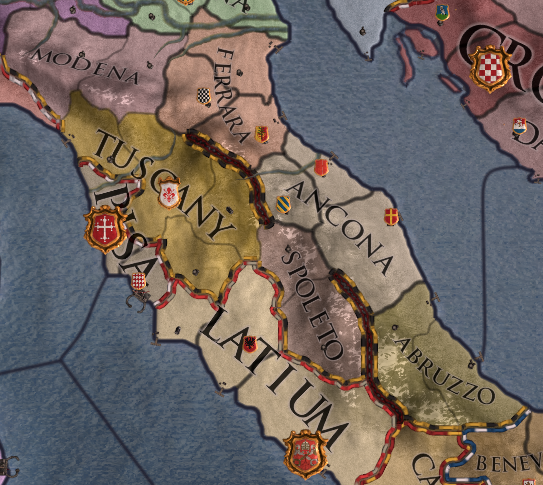 So for our last location, we have central Italy. I figure I will talk about the mountains first, as we have added parts of the Apennines throughout Italy. We’ve felt this has increased the tactical value of Italy somewhat, as the choices you make for movement and county conquering feels a bit more valuable, and we also felt it cut up the county more nicely, particularly considering the new Kingdom we added in central Italy (this will be discussed further down).

We have added Perugia into the Duchy of Spoleto, moving the whole Duchy a bit further north. Rimini has been added to the Duchy of Ancona, turned the two county Duchy into a three county one, to lessen the amount of chokepoints post-mountainfication.For the old county of Aprutium, we have turned it into the Duchy of Abruzzo and moved it into the Kingdom of Sicily. And we have taken parts of the old County of Firenze, and added the county of Arezzo, to make sure Firenze doesn’t stick its fingers into everyone else, as it has had a tendency to do. 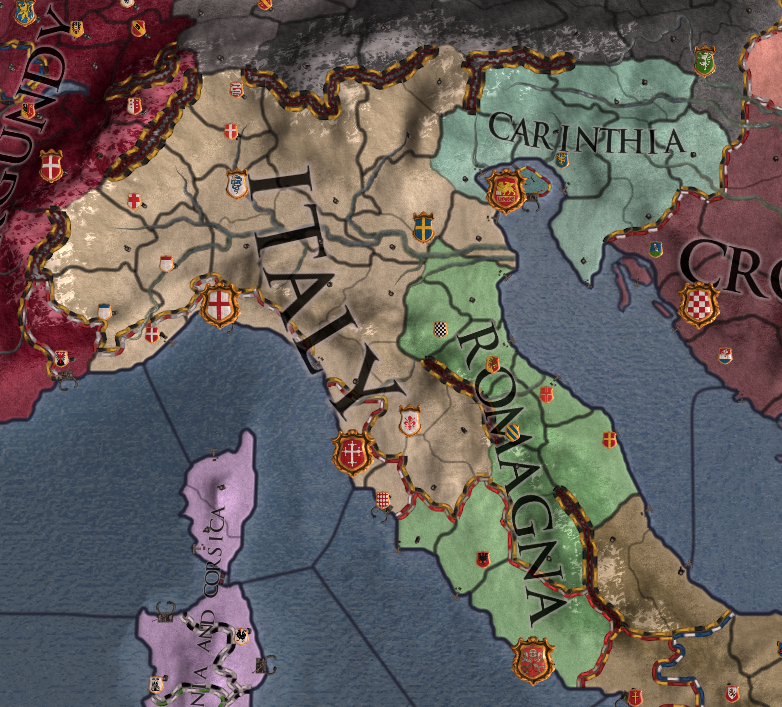 So for what I assume will be the most controversial change to the region, the two new Kingdoms added.

For Carinthia, it felt weird giving even more land to a Kingdom that is meant to reflect the historical Stem-Duchy of Bavaria, when we have the Principality of Carantania, the March of Carinthia and later on the Duchy of Carinthia as inspiration that could take the same role. We have made sure, as this is quite the small Kingdom with a lot of land held by the same person in some bookmarked starts, that the AI won’t create the Kingdom right away, so it should be more of a player goal than an AI goal.

And… For Romagna, we wanted to cut Italy into its more historical pieces, without adding a Kingdom called “the Papal States” that was only for an unplayable Theocracy. This was done for several reason: having the Pope try to seek out central Italy as he did throughout history, having the old East Roman areas be more difficult to hold onto for the Kingdom of Italy in the first bookmarks, and to lessen the massive size of the Kingdom of Italy.

PS. For those of you with an interest in the Habsburg jaw and the Archduchy of Austria, we have something special for you as well! (A special decision to create the Archduchy.) 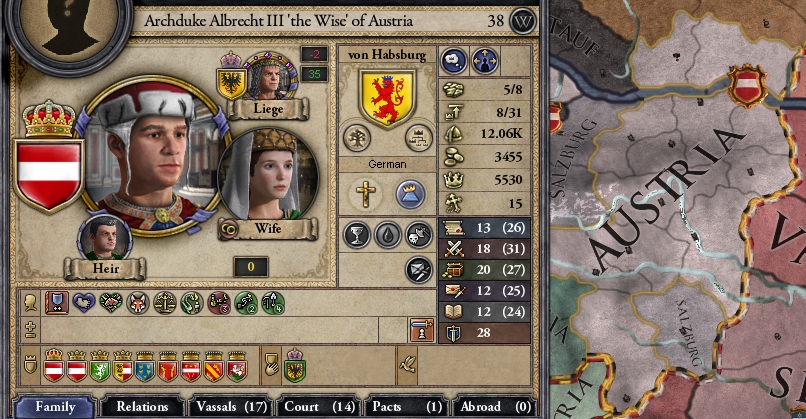 Aww yeah! Austria is no longer a two province duchy!

Hopin this comes out soon. Really Excited for this DLC. It is seeming like it will be the best dlc released for CK2.

Still. No. Release. Date.
I'm mad to see all these awesome changes and don't know how long i should wait for them. Same for EU4 and HOI4. You don't did well on this Paradox..
Expand signature
We need Chalcedonian Christianity in 769 A.D. instead of Catholic/Orthodox split for Crusader Kings II. Copy and paste this into your signature if you agree!
My english is not perfect, please point out my mistakes.
Please go visit and support my suggestions threads !
Portraits suggest
Over suggests
GENERATION 40: The first time you see this, copy it into your sig on any forum and add 1 to the generation. Social experiment.

Great changes, as a Czech I especially apreciate the decission to have Znojmo in De Jure and De facto Moravia ... which leads me to a small request: could we please see the rework done to Bohemia and Moravia ?
Expand signature
A 12th and 13th century start date in CkIII would be neat

I already love this changes without playing

Starting as Habsburgs in 1066 is one of my favourites in the game. King-tier Austria and proper duchies and borders are very welcome. Previously you were quasi-forced to become King of Bavaria for a nice realm, now thats not a necessity anymore.

Lovely! Speaking of Habsburgs, where are they in 1066?
Expand signature
Determinism in EU4 and prior games: https://forum.paradoxplaza.com/foru...essage-to-paradox-development-studio.1342219/

I like the inclusion of the Kingdom of Romagna.
Expand signature
Adding breadth and depth to the medieval aspects of economy, technology & the military - Magnate Lords A mod for CK2 ​

Have any changes been made to the de jure empires?

An absolutely terrific effort for this DLC/patch guys. Some great effort to clean up the map in lots of place, some great cleaning up of the character UI and most of all some great additional or revolutionised gameplay mechanics for pagan's and Crusades.

I've said it befor but in my opinion you are knocking it out of the park this last year with DLC's. It seems there's a lot more effort to add more depth to existing mechanics or rework mechanics that don't pan out right and what you are adding seems in general to go back to the roots of the games. Really great to see and glad that a DLC does not just exist out of adding Sailors as a resource or sillyness like that.

I'm currently taking a bit of a break of PDS games since I felt my attention to EU4 slipping a bit but with me preordering Holy Fury I pretty much own every DLC of CK2 and have spend way to little time in it (I came to it late) so I'm fully ramping up for some great campaigns when Holy Fury comes out to get me over the long wait for I:R

Snow Crystal said:
PS. For those of you with an interest in the Habsburg jaw and the Archduchy of Austria, we have something special for you as well! (A special decision to create the Archduchy.)
Click to expand...

I already hoped for special Habsburg portraits with deformed jaws

Shinkuro Yukinari said:
Lovely! Speaking of Habsburgs, where are they in 1066?
Click to expand...

Warl0ck said:
as far as i know in around 1100 they were barons in today's switzerland
Click to expand...

They are Counts in Basel (previous Aargau) in 1066.
Expand signature
Twitter: https://twitter.com/SnowCrystal_GD

Shinkuro Yukinari said:
Lovely! Speaking of Habsburgs, where are they in 1066?
Click to expand...

Count Werner of Aargau, now Count of Basel as it looks like.

I’m not sure if Chur should be part of Tyrol.