In this Dev Diary we’ll give a brief insight in how the CK2 QA team works and functions.

The team consists of myself (Servancour), PeterSkager, rageair and Leo Larsson. I’ve been here the longest and have been at Paradox for close to two years now, and so far it’s been a blast! We’re a close-knit team and work very well together, each and every one specializing in different types of gameplay.

As a team, we work very closely with the developers and attend all sorts of meetings to ensure that we stay up to date with the game. When you work with QA you need to know almost everything about the game, from overarching design to the smaller details of specific features. It’s challenging but also very rewarding.

While our primary responsibility may be to test the game, it’s not the only one. Many believe that the life of a QA only consists of reporting bugs, but it’s actually much more than that. We’re responsible for ensuring the overall quality of the product, by providing constant feedback, voice concerns where needed, comment on design and suggest improvements in order to make the game both better and more accessible!

Something we do every now and then when there’s new features to test is to simply play the game in order to get a feel for how to play with them. We usually test a variety of different scenarios, with varying start dates and setups, where we play for anything between a few years to several centuries. Sometimes we play for just a few hours, other times we have the campaigns going over the course of a few days, all while we gather feedback and impressions to the developers. This type of testing allows us to get a more accurate representation on how the game actually plays to find issues you wouldn’t find in a few minutes of playtime. Sometimes we even start using the same scenario just to see how far we can deviate from each other as we use very different playstyles. We believe that having many eyes on the same problem yield the best results.

We’re extremely passionate about the game. Each and every one of us here at the CK2 QA team has played the game for anything between a few hundred to several thousand hours and most of it has been purely for our own enjoyment. I myself play the game regularly outside of work and in my latest campaign I started off as Charlemagne himself, culture switched to German and created the Holy Roman Empire! I’m almost done with it though, with just the last hundred years or so left before the end date. My current ruler is Kaiserin Amalia “The Hammer”, ruling over Europe with an iron fist!

This passion also motivates us to not only ensure that the game performs well from a professional standpoint, but also from the perspective of a player. This causes us to often go above and beyond our ordinary tasks! We at QA has, on occasion, contributed with content to the game. Often to ensure that each and every part of the game feels like a quality experience. For example; we’ve created events to enhance certain aspects of the game (see the Sky Burial and Master Wrestling event chains) and even created art in the form of the Nomadic CoA’s introduced in Horse Lords.

I hope you gained some useful insight in how we approach CK2 from the QA team, and that we work hard to give you, the fans, a product that you deserve. Since we at QA love quality of life improvements, I’ll wrap this up by showing you the following screenshot of a previous feature we are extending somewhat: 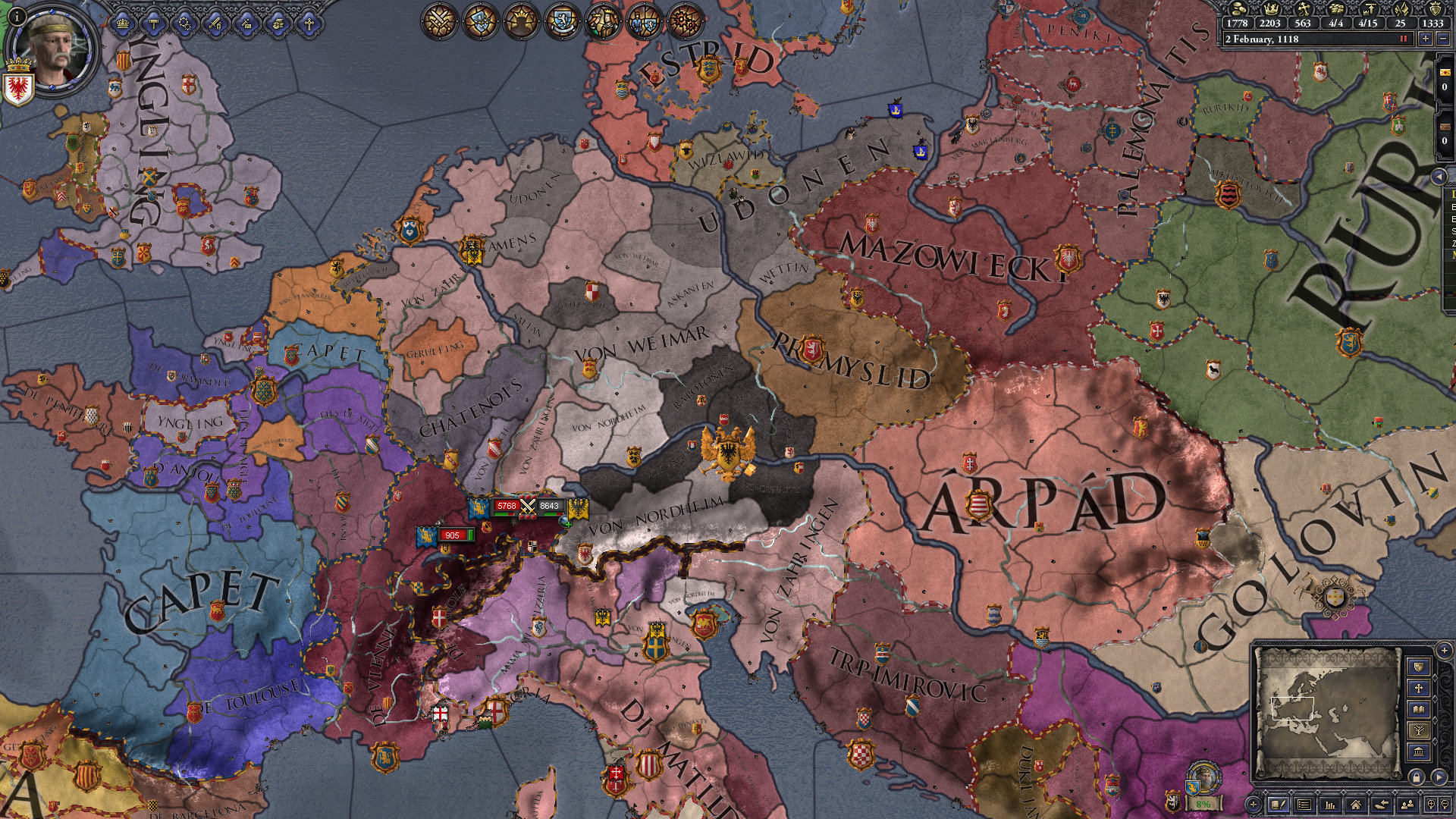 really scraping the bottom of the barrel here with these "dev" diaries
Reactions:

Tancred DH said:
really scraping the bottom of the barrel here with these "dev" diaries
Click to expand...

Would you rather have nothing? They are at least trying to keep the community in the loop.
Expand signature
Creator of Rank & File: A Courtesy Titles Mod
​
Reactions:

Tancred DH said:
really scraping the bottom of the barrel here with these "dev" diaries
Click to expand...

I disagree, I enjoy these insights into how Paradox and the teams work. I hope PDX continue with these kinds of dev diaries in between the ones revealing new features, etc. While I love the crunchy details about an upcoming feature, there are alot of other stuff that's interesting to read about.
Reactions:

Hmm, a realm's sub-dynasties are now visible for people of that realm? Neat, I guess.
Expand signature
Elder Kings Mod - Do you can the something something?
Reactions:

Anyone have a guess at what's new in the screenshot? I'm guessing an improved dynasty map mode, but can't really spot what's different.
Reactions:

@Servancour: Do you do any automated testing? If so, I'd be curious to hear about that.
Expand signature
BlueThing from the HBS Battletech game forums.
Reactions:

I like these dev diaries. It doesn't have always to be about new stuff. PDS already has 3 hype trains going on at full speed (Cossacks, HOI4, Stellaris). they'll probably delay a bit the 4th hype train so that there isn't too much overlap.
Reactions:

Darkath said:
I like these dev diaries. It doesn't have always to be about new stuff. PDS already has 3 hype trains going on at full speed (Cossacks, HOI4, Stellaris). they'll probably delay a bit the 4th hype train so that there isn't too much overlap.
Click to expand...

This. I'm already ruined for EU4 while I wait for Cossacks, it's nice to be able to play some CK without thinking about upcoming features.
Reactions:

huyderman said:
Anyone have a guess at what's new in the screenshot? I'm guessing an improved dynasty map mode, but can't really spot what's different.
Click to expand...

I think you see the dynasties inside your realm and not just the leading dynsaty of your realm in this map mode now.
Reactions:

crowdemon said:
Are you still doing the three DLC plan for 2015?
Click to expand...

How is it that you are allowed to keep your job after all the cheesy tactics are discovered by the players few hours after DLC release ?
Reactions:

huyderman said:
Anyone have a guess at what's new in the screenshot? I'm guessing an improved dynasty map mode, but can't really spot what's different.
Click to expand...

It is that function where you can hold down a control-button and click again, and then it opens up the dynasties within the dynasty, the same way they have made the political map mode, where you can click to see the vassals of vassals and so on...
Reactions:

I'm guessing the new feature in that screenshot is being able to "control+click" to see vassals while in the dynasty map mode.
Expand signature
GENERATION 37: The first time you see this, copy it into your sig on any forum and add 1 to the generation. Social experiment.
Reactions:

It does appear splitting with Ctrl click is coming to dynasty view that'll be cool.


Tancred DH said:
really scraping the bottom of the barrel here with these "dev" diaries
Click to expand...

I kind of agree with this actually. As much as I don't want to complain about my weekly crumbs, they are just crumbs. I understand that it is not in the best interest of any game developing company to just release all the details at once, to string us along and build hype. But the DLCs that you folks put out are not small you could spare a few more crumbs each week.
Expand signature
r/CrusaderKings Discord - Active daily, MP games, memes, history discussion.

I mean, I love these insights about the inner workings of the Dev Team, but rather than publishing them all at once before announcing a new DLC and somehow spoiling hyped fans who were expecting a DD about new features, I would have released them more regularly outside periods not close to the announcement or release of a DLC.

If you do not have enough material for "proper" DDs you may commit not to have them weekly. If this is all about the timing of the announcement well, I would have started this series two weeks before the announcement itself.
Expand signature
Goodbye CK2! My endgame screenshots for all sixteen Monarch Journeys, with brief commentary (micro-AARs).

And also make it so they can't cancel William's invasion by defending against Harald's.
Expand signature
BlindRaven on YouTube/Twitter. Watch my videos!

Let's Play Victoria 2: Krakow: Attempting to restore the glory of the Poland-Lithuanian Commonwealth