As just a side note for an educated purpose:

Le Nghi Dan's Reforms
Lê Nghi Dân changed the administrative system to "six ministries, six departments" which was considered as a brilliant policy.
Do you know how he get there?
On 3 October 1459, Lê Nghi Dân launched a coup that killed Emperor Lê Nhân Tông, and then declared himself as Emperor.

How did he get coup?
In 6 Jun 1460, a group of officials, notably Nguyễn Xí, Đinh Liệt, Lê Lăng, Lê Niệm,Nguyễn Đức Trung, launched another coup and successfully deposed him.

If Paradox wants to create a rebellion event, I think it would be a great idea. Different Dai Viet Emperors get a lot of coups sadly.

Champa
Description: " Although Champa was no match to our military experiences, the people of Dai Viet were feeling unsafe due to continuing of Champa military continue to pillage their villages. We need to teach Champa a harsh lesson and bring them stability if the ruler there fails to do so."
Completion requirements: Dai Viet owned Panduranga and Tay Nguyen province [later in history] [I hope they split into three province Kon Tum, Gia Lai, and Dak Lak]
Effects: Dai Viet gains 10 years of -10% of stability cost.
The country gets “Free Trade Agreement” for

10 years, giving the following effect:
2. Dai Viet Confucius
Description: "In 1467, Emperor Lê Thánh Tông was a devoted educator of Confucius. He created a new legal code called 'Hồng Đức. His rules were based on Confucian principals, but there was Vietnamese culture-infused of the women's equality such as parental consent was not required for marriage, and daughters were granted equal inheritance rights with sons. We will show the world that Dai Viet's meritocracy will serve this nation well."
Completion requirements: Three advisors are female and have a female general.
Effects:
The country gets “Honor Lady Trung Trac and Lady Trung Nhi” for

4. Become a "temples of literature" nation
Description: "Emperor Lê Thánh Tông had a vision of his government should be run by men of noble character as opposed to men from noble families. He intended to take power away from the ruling families of Thanh Hóa and gave the power to a new scholar class who did well on the official examinations. He took the first step to restart the Confucian examination process which happened in 1463. In order to fulfill the emperor's wish of spreading Confucius' classic works and increase the general population of literacy, we need to build more of Conficus temples."
Completion requirements: Dai Veit built a temple in all its provinces.
Effects:

7. Resist Ming
Description: "The Ming empire can pretense that it did not prolong Lê–Mạc War. But they did it. We were a discovery that in the Ming recorded stated that the Lê rulers were very dissatisfied with the Ming Empire because the Chinese had supported the Northern Mạc. We remember well in December 1592 the Mạc dynasty established a new capital at Cao Bằng Province with the direct support of the Ming emperor. Of course, we are and we will. We need to teach Ming's painful lesson about the respect of this kingdom's autonomy!."
Completion requirements:
Effects:

9. Restored [Lê] Absolute Monarchy [This is for the new mechanics of crown land] [I know right the emperor power was weakened during the Lê–Mạc War. After these events, the emperors became a figurehead and controlled by the Trịnh family warlords. (1533–1789) just like the shogunate in medieval Japan.]
Description:""
Completion requirements:
Effects: 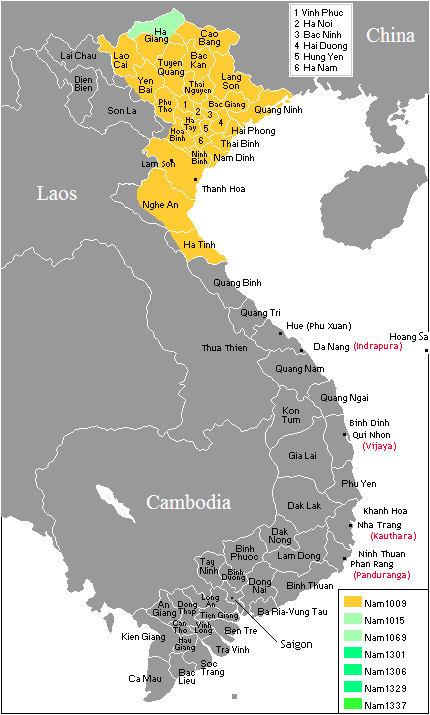 This, though not a mission tree I think, is some well-thought, historically accurate, well-presented event! Kudos!
Reactions:

korawit13 said:
@RichardOlcese , Thank you for your support. If I have time, I will create the tree in Microsoft Visio.
Click to expand...

Wow, that would be awesome! Looking forward to that! It might also be very helpful/implemented, if the next DLC is gonna be about South East Asia. Cheers!

Intriguing. You should try to present your mission ideas in a tree - like format. We use diagrams.net (draw.io) for that purpose in the Missions Expanded team. Example of Draw.io mission tree:

Stiopa866 said:
Intriguing. You should try to present your mission ideas in a tree - like format. We use diagrams.net (draw.io) for that purpose in the Missions Expanded team. Example of Draw.io mission tree:

Thank you for your helpful tip. Right now I did the research outline mission tree. I will do clean up and finalized it before I put it into the tree. Because some of the events are better suited as a decision or disaster event. I just generate ideas right now. Thank you for providing me guidance. I appreciate your time greatly.
Expand signature
Southeast Asia Mission Trees [Ayutthaya + Khmer]
Champa kingdom's Mission Tree
Lan Xang Mission Tree
Dai Viet Mission Tree

korawit13 said:
Do you know how he get there?
Click to expand...

The starting king Bang Co Le of the house of Le was still a child in 1444 (1441 -1459), after his father's sudden death in 1442, he became king or emperor (the vietnamese kings called themselves emperor) as a result of his father's will, his mother queen dowager became regen until 1452. He also was favored by most of the nobles and was known as kind and benevolent in history. However, he was the third son of the previous king.

Nghi Dan Le was more legitimate due to being the first and oldest son of the previous king. His mother's demotion removed him from the succession line of inheritance to the throne of Dai Viet. So he killed his brother and the queen dowager and took back what was rightfully his.

Well. Nghi Dan Le and 100 troops assassinated his bro at night. Using his legitimacy and bribery to secure the throne. His reformation was not so popular among the nobles and the lacking of talent made him killed by another coup.
Reactions:

@Jimmyfeellucky, any means nesseary were how Vietnam Emperors palace intrigued. That was how to become philosophy king [Confucius king]. The Emperor had to kill all most of all of his family members just how Ottoman empire inheritance of thrones. It was a family honor tradition. Lol
He gave his half brother Le Thánh Tôn the new palace. I guess gentry bureaucrats did get new palace that why they fought against him.
Expand signature
Southeast Asia Mission Trees [Ayutthaya + Khmer]
Champa kingdom's Mission Tree
Lan Xang Mission Tree
Dai Viet Mission Tree

The successor chosen by the previous emperor must be favored by the most powerful bureaucrats. Simply just to seek their support for the future heir. Otherwise, they would replace the guy anyway.
Although Vietnamese kings had many wives, their family's nobility ranks were different. As a result, their sons also had different ranks in the line of succession. Usually the empress title was given to the mother of the heir. If her child wasn't be able to rule, she would become regent. So if the queen was demote to a mere concubine, her son also lost his title of heir. Well you could easily imagine how bloody and intriguing to live in the royal palace at that time.
Usually the other sons were given nobility ranks and had to live far away from the capital. They usually also wouldn't rebel unless they had the support of the bureaucrats, who might be sick of the current emperor dude.
In this case, the bureaucrats detested Nghi Dan Le , and removed the guy . They chose Tu Thanh Le (known as Thanh Tong Le) , who was the fourth son of previous emperor, to succeed the throne, without him having to do anything in the coup.
I think this kind of succession was true for any confucian country during that time.
Reactions:

@Jimmyfeellucky, are you from Vietnam, correct? If you do not feel, I am being too intrusive. The reason I ask because you knew so well about history of Southeast Asia. Thank you for your expertise.
I am from Thailand nice to know you.
I do not want to competition with the devs. So I usually suggest something that devs did not have to work because busy improving something else or priorities to them.
Last edited: Jun 2, 2020
Expand signature
Southeast Asia Mission Trees [Ayutthaya + Khmer]
Champa kingdom's Mission Tree
Lan Xang Mission Tree
Dai Viet Mission Tree

No i don't feel anything bad at all.
I have vietnamese and Thais blood running in my veins, and really love the rich history in this region.
Not so many game about southeast asia you know. So i long waiting for the update in this region.
I love your work so far. Keep it up mate.
Last edited: Jun 2, 2020
Reactions:
Show hidden low quality content
You must log in or register to reply here.
Share:
Facebook Twitter Reddit Pinterest Tumblr WhatsApp Email Link
Top Bottom