In this thread I'll post what I'm working on currently for next releases of Mech Designer. Currently (22.06.2019) it is:
1) Redesign of "Free Tonnage" dialog. Functionality will be kept the same, however it'll have completely new look.
Last edited: Jun 22, 2019
Expand signature
Mech Designer - a nice, free offline mechlab for testing mech loadouts. Links:

Outstanding!!
Expand signature
Creator of XAI Battletech and other mods

Thank you for the work!

Thank you for all the hard work you're putting into this.

If I might make a suggestion:
- Would it be possible to read in the UnitTags (StreamingAssets/data/tags/UnitTags.json) and turn the tag list into a multi-select or checkbox table rather than having to remember what all the tags are?
- Would it be possible to add a checkbox that adds the 'BLACKLISTED' tag?
Expand signature
Twitch: https://www.twitch.tv/vidarion/ || Discord: vidarion#5352
Guides: Community Guide Compilation thread | Edmon's LoS Guide: https://www.youtube.com/watch?v=jpFhvz11qhg | Edmon's Double Turn Guide: https://www.youtube.com/watch?v=FZhINyHfamU

mjbroekman said:
Thank you for all the hard work you're putting into this.

Generally it's possible, though presentation rather will stay as it is now. However, I will ponder about some kind of editor for adding/removing tags - a quick idea is:
after triggering editing the tags such dialog will popup

Code:
Of course, this might change during development, if I'll see that idea does not work well.

There are additional things to consider, like:
Only after getting an answer to these I can start some serious development.
Expand signature
Mech Designer - a nice, free offline mechlab for testing mech loadouts. Links:

I don't believe the tags need to be able to duplicate, though some tags in existing files are duplicated. For example, some mechs have two unit_jumpOK tags or two unit_indirectFire tags. Those are the only two that I've seen duplicated so I think that's just a mistake and doesn't actually impact anything.

The other thing I forgot about was the fact that there are faction entries in the UnitTags and those are occasionally negated. So, for example, there are units with "Kurita" in the unit tags, but there are other units with "NotKurita" in the unit tags. In the first case, I think that increases the chance of the unit appearing Kurita lances, while the second version prevents the unit from appearing in Kurita lances. (I think there is still a chance of the unit appearing in Kurita lances if it doesn't have either of those, but just at a lower chance than if it had the "Kurita" tag). "Kurita" and "NotKurita" would be mutually exclusive, though I would think of that more as "Kurita with a negation modifier" rather than two separate tags. And I think the faction tags are the only ones that can be negated.

Hmmm so in short - I can give a tool for easier setting up unit tags, but it'll be up to modder to set something valid and meaningful. Ok, fine by me.
Expand signature
Mech Designer - a nice, free offline mechlab for testing mech loadouts. Links:

Yeah. The idea was more to make it easier for the modder to know the stock unit tags and be able to select the ones the want. I'm not so far into modding that I have them all memorized so I thought it would be useful
Expand signature
Twitch: https://www.twitch.tv/vidarion/ || Discord: vidarion#5352
Guides: Community Guide Compilation thread | Edmon's LoS Guide: https://www.youtube.com/watch?v=jpFhvz11qhg | Edmon's Double Turn Guide: https://www.youtube.com/watch?v=FZhINyHfamU

@Amechwarrior @mjbroekman
This is how it will look like, more or less: 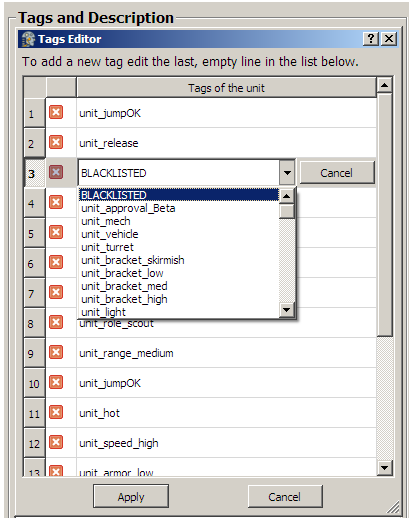 MasterBLB said:
@Amechwarrior @mjbroekman
This is how it will look like, more or less:
View attachment 506372
The combobox is editable so you'll be able to write custom tags as well.
Click to expand...

Thank you Good @MasterBLB. Our Modding Community is all the better and more immersive for your time, talents and efforts. :bow:
Expand signature
If you know the enemy and know yourself, you need not fear the result of a hundred battles ~ Sun Tzu
Join your fellow BATTLETECH gamers in a Tournament, IWS League, Friday Night Fights, Command Academy and BT Discord.

01.04.2020
QoL improvements:
- add new equipment dialog in floating mode will get buttons to switch to other locations of the mech, without need to move cursor over the mech and click them.
- all buttons from the main toolbar will be duplicated in context menu of the main draw area, so it'll be possible to invoke it anywhere just by right mouse button.
- ABANDONED direct support of Battletech Extended mod due to extremely unfriendly community; couldn't get necessary information from them.
Expand signature
Mech Designer - a nice, free offline mechlab for testing mech loadouts. Links:

An illustration of the change - before floating mode looked like:

I've added buttons to switch part the dialog is bound to, and it looks like: