Menu
Install the app
You are using an out of date browser. It may not display this or other websites correctly.
You should upgrade or use an alternative browser.
Crusader Kings III 10360 Open Beta Feedback (1.3.2) 12 Bug Report 6306 Tech Support 702 Multiplayer 76 User Mods 899 After Action Reports (AAR) 127 Suggestions 2377
Show only dev responses
I

Does the technology you have access to, say succession laws, depend on the characters culture or the province culture of the capital?

What prevents some scottish backwater noble to culture flip to greek or have his heir educated as greek and immediately gain access to all innovations unlocked by Byzantium?
Reactions:

Wokeg said:
Show us the good stuff!
Ahhhhhh, you want to see some maps? See how granular we’re getting with our cultural setup this time around? Well, maps I’ve got! How many new cultures can you pick out?
Click to expand...

Could you show us a map for Persian cultures?
Reactions:

How does innovation work for culture-converted characters?
Reactions: 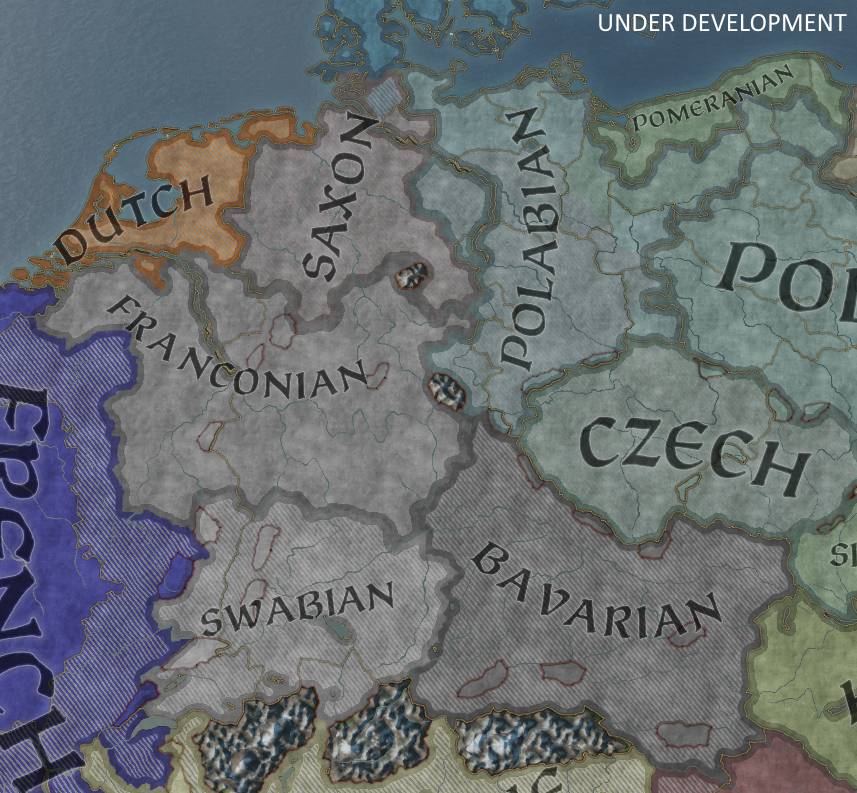 I assume this is either an oversight or from an older build but the culture labeled here as Dutch should be Frisian.. I also still miss Carantanian on this map.

I hope you have taken note of the various threads and posts concerning cultures.
Reactions:

Many cultures from CKII are missing
The map of culture in CKIII is not consistent in how culture it adds. Some regions have many od them, and others lacks important ones.

So guys, I saw there is a lot of people who has issue with CK3 cultures, what is in, what isn't in the game and where some cultures are/should be. So, why not make a single thread where we express our opinions clearly so that maybe Devs can see...

So Crusader Kings finally has embraced the division of the Middle Ages in Dark Age, Feudal Age, Castle Age and Imperial Age
Toggle signature
The Kingdom of Navarra and Medieval Basques did not practice Cognatic Succession

Is it possible to change character Culture?
Reactions:

Wokeg said:
Any culture with at least one landed ruler somewhere has a cultural head, who then has complete control over which fascination is selected from available innovations. The cultural head always shares the culture they are the head of, and is the character with the most counties of that culture within their sub-realm in the world.
Click to expand...

Also how hard a requirment is there on the system for there to always be a cultural head?

Will there be cultures without cultural heads? Will they be at a disadvantage / only gain through exposure?

How does changing culture work as a non-member? I suppose there is no county level tech now?

I am so in love with this system with how you've taken the most un-fleshed out parts of CK2 and combined them but I have so many things to wrap my head around.


Wokeg said:
Further, if your cultural head is tribal, you will be unable to progress to the next era until you obtain a non-tribal cultural head.
Click to expand...

This is a departure though. Does this not clamp down on or entirely eliminate staying tribal long term, which was very much viable in CK2 tech economy and taxes be damned.
Toggle signature
r/CrusaderKings Discord - Active daily, MP games, memes, history discussion.

hatched from an egg from the bottom of the sea

Found spreading culture to be a huge pain in CK2 so that's awesome that it's more straight forward in this one. The new tech system also looks like a significant improvement on the one from CK2. Excited to drive fear into the hearts of men with my senegambian huscarls.
Toggle signature
"I'm the baby, gotta love me!"
- Sun Tzu, The Art of War
Reactions:

What shall be next week's dev diary on?
Toggle signature
My AARs
Vyshan's Inkwell listing of his AARs
Dharmachakra - An Indian and Dharmic Religion Improvement mod
Retired HOI4 Kaiserreich Dev
Reactions:

Fletz said:
What if I am the Head of more than just one culture?
Click to expand...

You can't have multiple cultures so you can never be the head of more than one. You have to be of the culture to become cultural head.


Wokeg said:
The cultural head always shares the culture they are the head of, and is the character with the most counties of that culture within their sub-realm in the world.
Click to expand...

mwa11ace said:
You can't have multiple cultures so you can never be the head of more than one. You have to be of the culture to become cultural head.
Click to expand...

Thanks! I've overlooked this sentence!
Reactions:

What are the Byzantine (or their regional) special innovations?
Reactions:

Also are there going to be like split off cultures / events for Cisalpine?

james24eagle said:
What are the Byzantine (or their regional) special innovations?
Click to expand...

Love to hear about some of the melting pots and decisions! Agreed too that Basque should extend into Aquitaine.

Are there still cultural specific features like Basque/Zhangzhung equality and Tanistry? Do they count as special innovations? If so, does that mean Irish/Welsh etc can only use Tanistry in certain eras?
Reactions:

Technology is bound to culture or culture group ?