Is it possible to go backwards in regards to eras?
I only ask because it would be SO satisfying to raze an enemy so hard they actually fall back to an earlier societal level.
Expand signature
Step back! She's going to severely reprimand him! -Darwin Watterson

Tryvenyal said:
Hmm.. I like this but one thought... How does charachter culture shift works now? will I get alot of free stuff by
shifting to my "forced-cuncubine"´s alot more advanced culture? Or will I be restricted from changing culture at all when I am in a far-behind one? I don't know what one I would prefer, one sounds gamey and one sounds dull. The middle option where I can change but need to personally catch up with all new ideas would be cool but probably very heavy, if each charachter needs to personally grasp all cultural ideas.
Click to expand...

To be honest, changing culture by decision is, and always has been, incredibly silly. That would be like me moving to Beijing and instantly becoming fluent in Mandarin.
Reactions: AuroraTentacles, ShinsukeNakamura, BrotherJonathan and 2 others

I was wondering, if Sicilian is a melting pot culture, what will it be made of?
Reactions: BrotherJonathan
F

Zhetone said:
even if he were non-playable you could still interact with him via various unsavory game mechanics. they will never touch this in any game they make.
Click to expand...

Ah yes. Temptation mechanics ...
Expand signature
GENERATION 46: The first time you see this, copy it into your sig on any forum and add 1 to the generation. Social experiment.
The one thread you need to know me:
https://forum.paradoxplaza.com/foru...berofsociety-ideas-collection-thread.1384777/

How many sets of unique cultural models are in the first release?except Europe, Islam and nomads
Reactions: Farfour and BrotherJonathan

Fallofthepurple said:
Saxony & Saxon culture refer to Lower Saxony (technically the territory is larger) as is appropriate for the games timeframe. Modern day State of Saxony was predominantly Slavic in both 867 and 1066 and only shifted slowly to German through the Ostsiedlung.
Click to expand...

Please correct me if I'm wrong here, but wasn't the princely Electorate of Saxony (via the earlier Ascanian Duchy of Saxony) a descendant from the culturally Saxon stem duchy of Saxony...

Maybe limiting the Saxon culture to the "Old Saxony" as per the screenshot made sense for the 867 start date, but early 10th century they have not just reached the Elbe frontier, but also crossed it.

Of course it would be lovely to confirm the date of the screenshot, I just assumed it was 1066 based on how Spain looked like...But even in the earlier start date, the border between the Saxons and Slavs should be further to the east I recon.
Reactions: inSaint and BrotherJonathan
C

I noticed in a recent video of CK3 that the religion screen has a sub-heading named 'Bastardry' - this isn't a word; the correct name is Bastardy, without an r.

This should be updated. 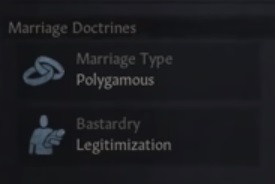 Aeroclub said:
Please correct me if I'm wrong here, but wasn't the princely Electorate of Saxony (via the earlier Ascanian Duchy of Saxony) a descendant from the culturally Saxon stem duchy of Saxony...

Maybe limiting the Saxon culture to the "Old Saxony" as per the screenshot made sense for the 867 start date, but early 10th century they have not just reached the Elbe frontier, but also crossed it.

Of course it would be lovely to confirm the date of the screenshot, I just assumed it was 1066 based on how Spain looked like...But even in the earlier start date, the border between the Saxons and Slavs should be further to the east I recon.
Click to expand...

Technically yes and no.

The eu4 electorate and from then on till i think kingdom of Saxony formed out of the Magriavate of Meissen that inherited the titles of the Duchy (electorate) of Saxe-Wittenberg.

None of these really represent Ancient Kingdom of Saxony and the subsequent Stem Duchy. They were the last remaining parts, i believe held by the house of ascanian.

This in contrast to Brunswick-Luneberg which is the house of welf, holds a lot of the eastphalian lands and is today part of lower saxony. And the region of westphalia, another saxon region. But they got deposed.
Reactions: Farfour and BrotherJonathan

XIII039 said:
While the culture system certainly seems interesting I cannot ignore the glaring and quite frankly offensive mistake this Dev Diary as shown.
The proud County of Devon is not, will not and has never been Cornish!
Click to expand...

Devon likely wouldn't be Cornish by 867 since Wessex already conquered Devon during the collapse of Dumnonia and Cornwall probably lost its independence in 838 after Hingston Down, but surely you realize Devon literally means territory of the Dumnonii, right? "Has never been Cornish" is more than wrong.

EDIT: (Evidence suggests Cornish under-kings continued to rule until the drowning of King Dungarth.)
EDIT2: (We really need some system of overlords and under-kings in Britain, they were kind of a major part of its early medieval politics)
Last edited: Sunday at 16:50
Expand signature
Something, something, Better Anglo-Saxons

Xain said:
I was wondering, if Sicilian is a melting pot culture, what will it be made of?
Click to expand...

Yup, I didn't think they were significant enough in population to converge as well but the article proved me wrong.
Expand signature
Something, something, Better Anglo-Saxons

A bit late to the party but I felt I had to comment on this as language and culture are topics very close to my heart and I'm very excited to read about this new approach in CK3! I really like the tie in with technology, it makes both culture and technology more interesting and it also gives a good additional motivation for playing tall rather than just colonizing everything. I'm really looking forward to seeing myself how exactly it is all implemented!

However, I do want to add my voice to the chorus of complaints about the culture map of the low countries shown here. I know that language =/= culture and that usually the place where you draw borders is very much up to debate, but even with all that in mind I cannot find any argument to support the mess that is shown here. Dutch language and culture descends from Frankish and was at the time contrasted to Frisian, Saxon, and French culture. It could in this timeframe either be represented as being the same culture as (High) Franconian, or as separate from it with a border running southeast of Cleves and Loon. Right now north of the Rhine the two are represented as separate while south of it they are united, which just doesn't make sense. If you want to have a separate Dutch culture the duchy of Brabant and most of the duchy of Flanders should be part of it as they were the cultural heartland of medieval Dutch culture. North of the Rhine, only Utrecht, Cleves, and the more important parts of Guelders (Arnhem and Nijmegen) could be said to be Dutch in 867, though I think by 1066 Zeeland and Holland (though not West-Friesland) had also become Dutch already. The other parts were in this timeframe still firmly Saxon (the rest of Guelders, Overijssel, Drenthe, and the city of Groningen though not the land surrounding it) or Frisian (the rest).

I'm glad to read that the orange colour does not indicate Dutch being in the English culture group though, it was and is culturally and linguistically much closer to Germany (Dutch people would call themselves Germans up until the seventeenth century). Frisian could be argued to be either in the English or the German culture group depending on whether historical relations or current ties are considered more important.
Reactions: mahidevran

Farfour said:
Yup, I didn't think they were significant enough in population to converge as well but the article proved me wrong.
Click to expand...

This looks really interesting, and looks like a great improvement over CK2 technology mechanics overall!

A few nitpicks on implementation, based on what has been shared here:

1 - not a fan of the "head of the culture" mechanic - it feels forced and gamist.
While I understand the idea of it, I feel that a better approach would have been a weighted average between lords of those cultures based on the influence of each lord would have been better, with the ability to influence other lords to also pursue the same technological innovation. You might have most people not care about technological advances, and instead a "fascinated" lord might try to convince other lords of the same culture and get them also (somewhat) fascinated. In that way, you could even have two different characters that got fascinated with different stuff and are trying to make it trendy among their peers...

2 - I'm not fond of "time" locked technologies - ideally the requirements should be enough to make them fit in the overall picture. I can live with that, though.
Reactions: Farfour, Lordy's and Colin
X

And as always no arpitan/francoprovencal culture