Now that I think about it: what are the icons at the right of the traits? Ambitions?
Expand signature
Ahi serva Italia, di dolore ostello, | nave sanza nocchiere in gran tempesta, | non donna di province, ma bordello!

The trait icons look beautiful but I'm not sure how easily readable they are going to be. CKII's icons were sometimes difficult to interpret without a tooltip the first time you saw them but once you learned the icons you could easily reconise them as they were high-contrast and easy to read. These I'm not so sure about. But then again mmo players have been dealing with pretty splodges of colour for icons for ages so maybe I'm just being picky.

The portraits though? Plain awesome, nothing to comment apart from that.

I thought the traits didn't feel anything like each other in CK2 and affected much different things outside of the attributes they gave you so I'm confused by that first part. Is there a good example of how you'll be putting more emphasis on personality traits in CK3?

sreckom92 said:
Can we know the topic of the next week diary?
Click to expand...

Can't say much, you will have to give it a guesst!
Expand signature
Community Ambassador for Crusader Kings III
► Twitter Nicou

ogarrr said:
How moddable is the transference of genetics? Would it be possible to, say, create a family where they have a prevalence for strength and almost all of them have black hair and blue eyes? Except for those three blonde haired, green eye kids. But take no notice of them.
Click to expand...

It would, however those three kids would have the inbred trait, and their uncle would be rightful king.

With every dev diary we realize how much could be enhanced in ck2
Expand signature
How does a mere and gross materialist like me, with no expectation of a life to come, decide what, if anything, is worth caring about? (...) A life that partakes even a little of friendship, love, irony, humor, parenthood, literature, and music, and the chance to take part in battles for the liberation of others cannot be called 'meaningless' except if the person living it is also an existentialist and elects to call it so. It could be that all existence is a pointless joke, but it is not in fact possible to live one's everyday life as if this were so.

I wish 5 classic branches like martial, learning etc would have more color affirmation on character screen. As well as just options tied to these skills
Because for example when 5 numbers are close to each other it is hard to see which one means what
Expand signature
Simple and genius mod for EU4
https://steamcommunity.com/sharedfiles/filedetails/?id=1409824934
T

rageair said:
On the negative end of the spectrum, we have traits such as Albino or Ugly, which will cause your character to not be as pleasing to the eye…
Click to expand...

That's a really unpleasant and insensitive way to describe Albinos, especially considering how much prejudice they suffer for their appearance.
Reactions: 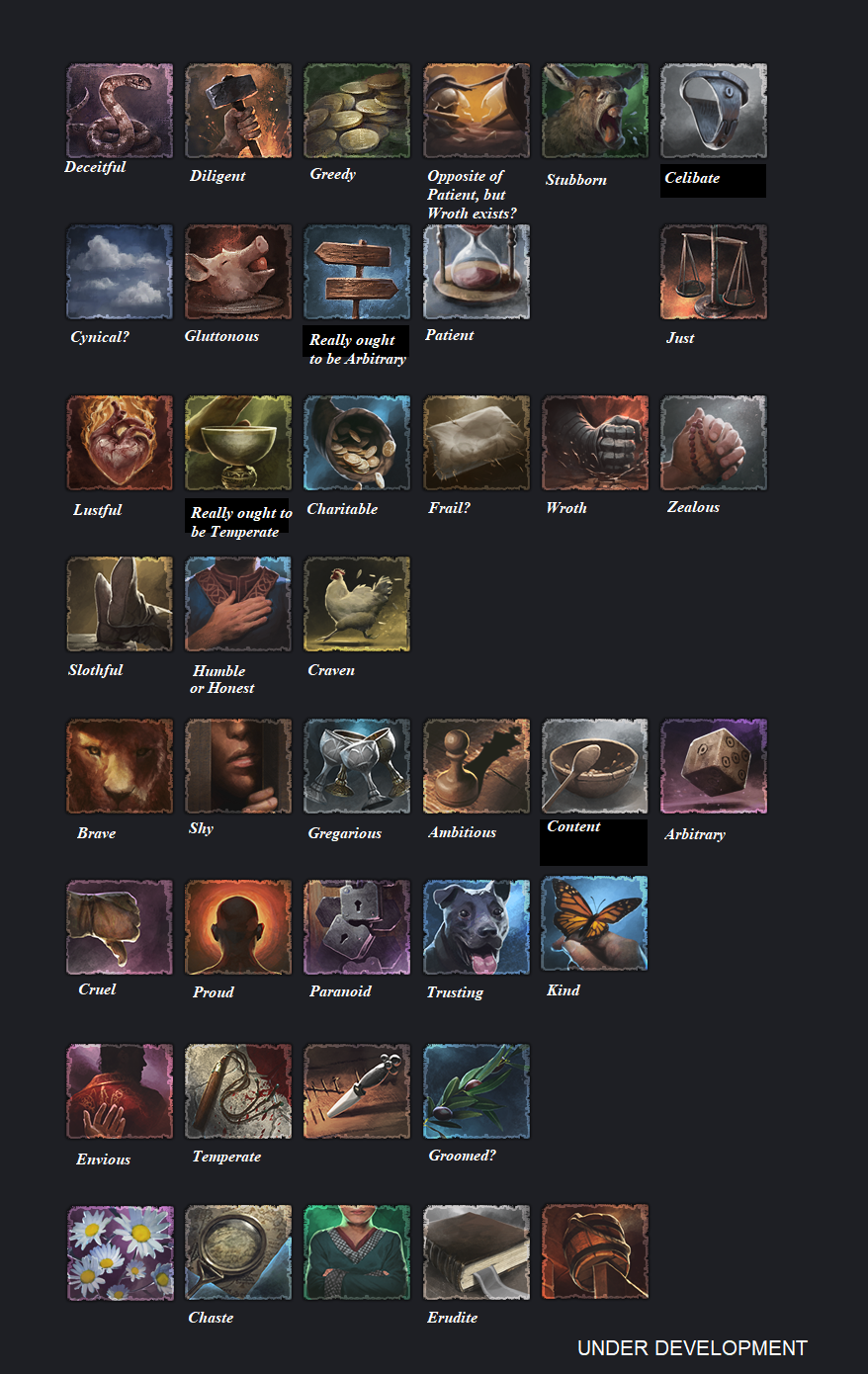 My take on what traits are represented by what pictures. A few of the pictures felt like better representations of certain traits than the CK2 versions of traits, but I stuck to the original CK2 symbols and mentioned which ones fit better in my opinion. I honestly can't decide where the other humble/honest trait goes, and it feels odd to put Groomed in when there's no obvious Uncouth equivalent, or Frail in when there's no obvious Brawny equivalent. You can tell I made a few mistakes in my attempts along the way. I wasn't sure about Cynical, but I think the clouds might indicate not seeing anything but the sky watching over you? The broken hourglass also is rather confusing, since the opposite of Patient is Wroth, but we already have a fist that is pretty close to the CK2 icon for Wroth.

@rageair Would you mind sharing a rough percentage of how correct my guesses are?

Edit: Now that I've had a closer look, Chaste is definitely the top right, since the one I labeled as Chaste is showing a magnifying glass over a map, not a ring on a table as I previously thought.
Last edited: Dec 10, 2019

Taniwha said:
That's a really unpleasant and insensitive way to describe Albinos, especially considering how much prejudice they suffer for their appearance
Click to expand...

You just answered why they made the decision for it to be that way. It's an unpleasant reality that they're looked at unpleasantly by a lot of people and it'll reflect that in the game.

LukeCreed13 said:
Now that I think about it: what are the icons at the right of the traits? Ambitions?
Click to expand...

Serenity84 said:
The characters in this pictures look better overall than what we've seen previously. But some of them still have weird poses. Like the monk looking off the side. In other pictures some looked at their feet or the ceiling. Some variations in poses is good, but such extremes can make them look bad.
Click to expand...

If the portrait is moving, would it be so bad and unrealistic that the character takes a glance somewhere else ? We only saw screenshots yet, I am actually very curious to see how the portraits look on a gameplay footage.

AlphaCitrouille said:
If the portrait is moving, would it be so bad and unrealistic that the character takes a glance somewhere else ? We only saw screenshots yet, I am actually very curious to see how the portraits look on a gameplay footage.
Click to expand...

rageair said:
Personality Trait icons. Can you guess which one is which?
Click to expand...

There you go. I hope I get a free, Steam-activable CK3 key after such effort! 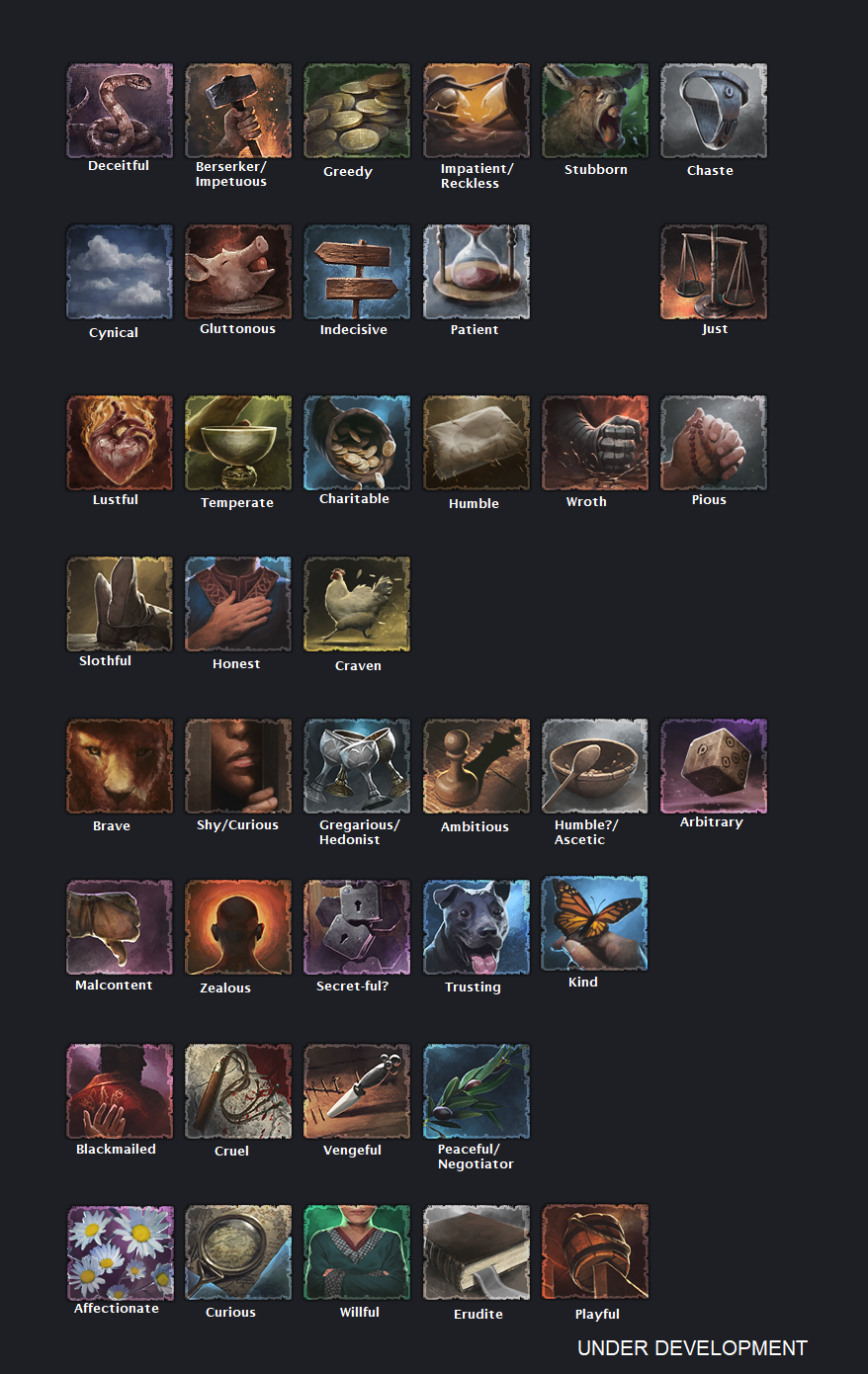 Expand signature
"Agreed. We need elephants in the seduction schemes."
By Razmorg

Nyrael said:
Education Traits, the ones you get after becoming an Adult. Midas-Touched, Brilliant Tactician, and such.
Click to expand...

IndigoRage said:
This is the price you pay for having customizable 3D models in a video game that encourages modding.
Click to expand...

Heiliges Thüringens Reich said:
There you go. I hope I get a free, Steam-activable CK3 key after such effort!

How are clouds Cynical? It's gotta be Content
Expand signature
aka Agamidae. My mods: Better UI for Imperator, Elegant Galaxy for Stellaris

Will there be a ruler designer for us to create our own characters?

The bowl one is probably "content", because that's the same icon as in CK2.
I

Looks good, although I am still sad that this will make modding so much harder and that we will see less outlandish mods or total conversions like Elder Kings because of it.
Do you have any tools planned to help modding those portraits? Or at least a 2D compability mode you can turn on for specific characters?