Jump to latest Follow Reply
Menu
Install the app
You are using an out of date browser. It may not display this or other websites correctly.
You should upgrade or use an alternative browser.
Crusader Kings II 69417 Bug Reports 19652 User Modifications 10446 Suggestions 5856 Tech Support 6309 After Action Reports
Show only dev responses

Hello all, it’s time for another DD! Today I’m going to tell you about the Prosperity system, which is a <secret DLC> feature. Prosperity is rather like the opposite of Depopulation, which I have mentioned in previous DDs. In essence, provinces which have not been sieged, raided, or ravaged by disease for a long time will begin to Prosper, and gain certain bonuses- such as extra tax income and faster replenishment of levies. 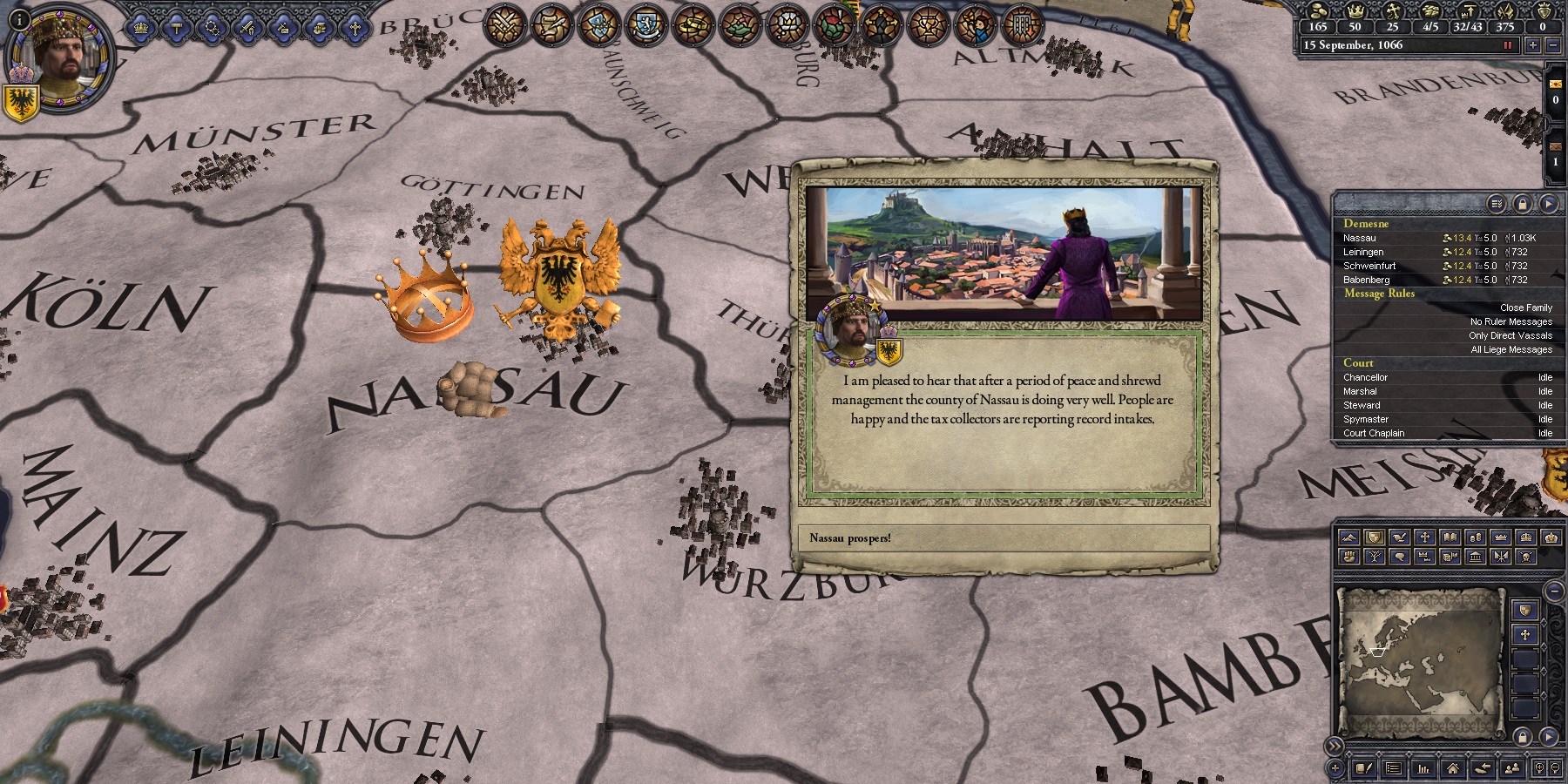 To go into a bit more detail, provinces will have a hidden value which increases every year based on things like random chance, the terrain of the province, the ruler’s stewardship, if the realm is at war, and if the province is the ruler’s Crown Focus. “Crown Focus? What’s that?” you ask? Well hold on, I’ll get to that soon. When this value hits certain thresholds the province receives a modifier and the owner is informed that the province is Prospering. If things continue to go well, there are up to 3 levels of Prosperity to be gained. On the other hand, if the province is sieged, sacked by raiders, or infected by an epidemic, the Prosperity level will be reduced. If a province is Depopulated, all Prosperity is wiped out.

Various other factors can also affect the Prosperity value of a province, many decisions and events which involve building things, deals with merchants, holding feasts and tournaments, and that kind of thing now also have a Prosperity increasing effect, typically in your capital if another province isn’t involved. For the Norse, there’s also an event which can trigger when a fleet returns with loot which gives the capital a small bonus.

And finally, there’s your Crown Focus. Independent rulers who are Dukes or higher, and of sufficient size can set one of their Demesne provinces to be their Crown Focus - somewhere the ruler is devoting more of their attention to, which causes an additional yearly increase in Prosperity. Further, if your Crown Focus province has achieved the maximum level of Prosperity there are some new beneficial events which can fire there. The Crown Focus is also the cause of the crowns seen on the map in some earlier screenshots, although we’re thinking of showing only your own Crown Focus icon to avoid map clutter. 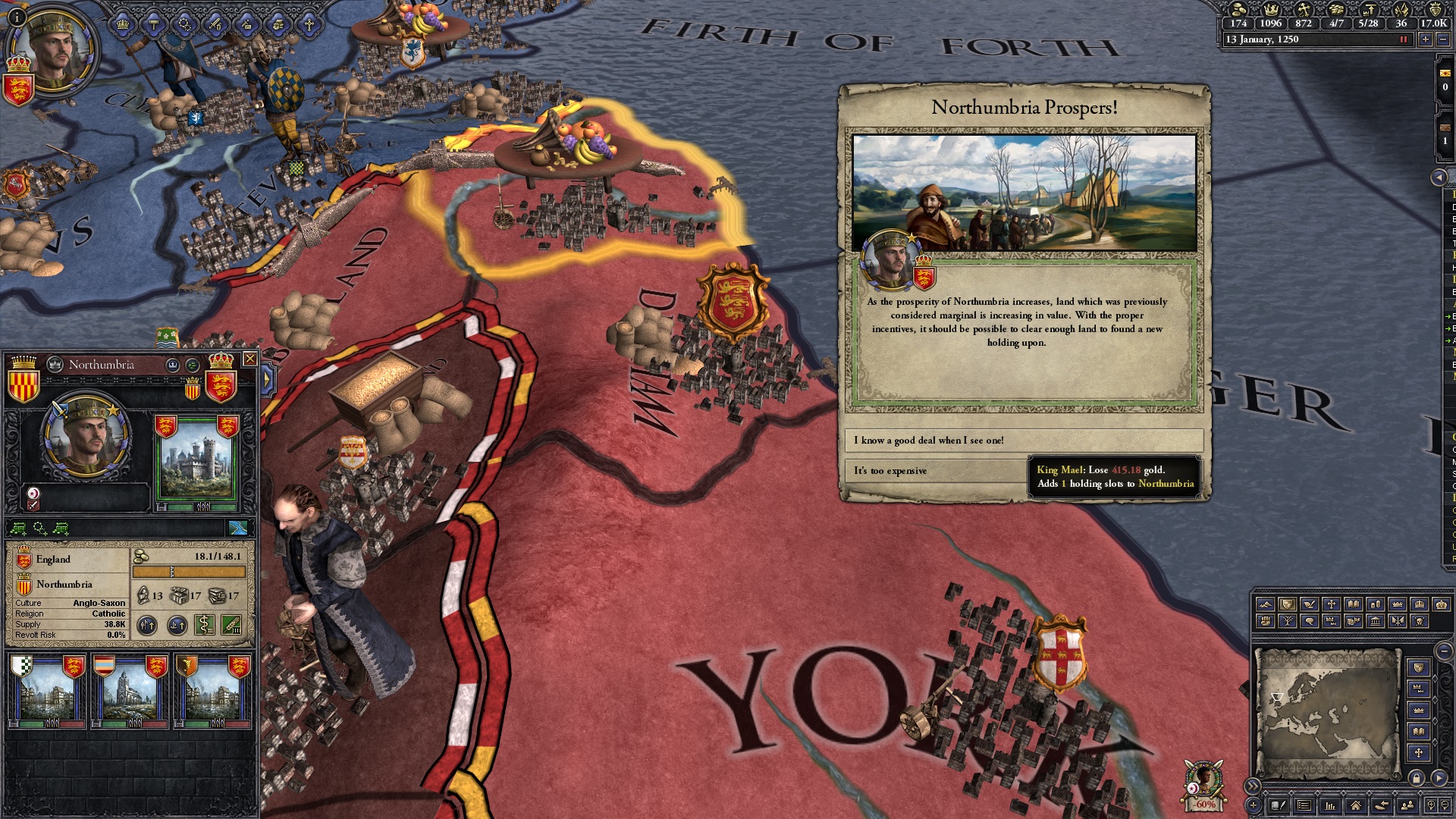 Wow. when I heard there was going to be a new prosperity system I thought you'd be pretty much put something like CK2+'s rich/poor province modifiers and be done, but it looks like you've gone the whole major expansion feature on it. And that's awesome.
Toggle signature
"There is no such thing as an unbiased argument - indeed, facts support bias', or else they wouldn't exist." - Grand Historian

Additional holding slots, neat. I hope it takes a good long while before that event fires though (looking at you, game performance).
Reactions:

Huh thats pretty interesting. Should be fun to see how it turns out(especially when modders get ahold of it).
Reactions:

Seems the game is just getting bloat now.
Reactions:

You're Still going to be fixing Conclave right?
Toggle signature
It has been said that history repeats itself.

“The more you know about the past, the better prepared you are for the future.” ~ Teddy Roosevelt
“A generation which ignores history has no past and no future.” ~ Robert Heinlein
“I like the dreams of the future better than the history of the past.” ~ Thomas Jefferson
“What is history? An echo of the past in the future; a reflex from the future on the past” ~ Victor Hugo
“Those who cannot remember the past are condemned to repeat it.” ~ George Santayana
“History repeats itself, first as tragedy, second as farce.” ~ Karl Marx
“And history with all her volumes vast, Hath but one page.” ~ Lord Byron​
Goodbye East vs West. You're not forgotten!
Reactions:

Those grain and fruit map icons look really out-of-place. Do they display constantly? Could you maybe limit them to a prosperity mapmode?
Toggle signature
"You know how the English conquered Wales? One village at a time. Because no Welshman would run to the next Welsh village to warn them the English were coming. You all went down warm in the knowledge that the next village would get it too and they deserved it for being foreign." -- William of Stonham
Reactions:

DominusNovus said:
Bananas, only slightly anachronistic. Largely only grown in the Middle East during this time period.
Click to expand...

wildbillhdmax01 said:
You're Still going to be fixing Conclave right?
Click to expand...

This sounds amazing, anything that can add holdings is going to be amazing. Fffff I've wanted something to add holdings for so long.

This really feels like how history worked following periods of plague.

But the crown is a bit big, but if I only get one or a few I could handle that.

But oh dear god those plates. I love the way the map and the cities, and the construction animations look in this game. And I get that we already have giant councilors walking around.

But I don't think that I'm going to care for those giant plates floating eerily above cities as the indicator. It just looks unnatural and cluttered, the grain is slightly better but still.

The enlarged crown meshes fine with the medieval map but the giant food doesn't imo.

The rest of it though just looks amazing. I really really hope that there is something related to culture or religion conversion with the crown focus though.
Toggle signature
r/CrusaderKings Discord - Active daily, MP games, memes, history discussion.

Hmm my interest is piqued. I might need to retract my earlier meh.
Toggle signature
Go Bucks
Reactions:

Looks really nice, my only concern is there seems to be an awful lot of 3d models now on the map for the provinces now. Seems like that could get very cluttered and very annoying quite quickly.
Toggle signature
Experienced Programmer on Crusader Kings 3

Looks amazing. Features linked to the economy/demography of the provinces were sorely missing. Just hoping it doesn´t drag down performance any further.
Toggle signature
Black and white, dancing together, side by side through stormy weather...
Reactions:

Asiak said:
But oh dear god those plates. I love the way the map and the cities, and the construction animations look in this game. And I get that we already have giant councilors walking around.
...
The rest of it though just looks amazing. I really really hope that there is something related to culture or religion conversion with the crown focus though.
Click to expand...

I think we'll scale them down, but I find it useful to see them on the map. And yes, conversions can be triggered by your Crown Focus.
Toggle signature
Relentless madman.
Reactions:

Will it be more gaining to raid or siege provinces, which are prospering? In my eyes it has to add something the other way?
Reactions:

would it be possible to represent prosperity by having little cart/boat graphics doing trade and have the rate be based on prosperity (with basically none in depopulated provinces?)
Toggle signature
"There is no such thing as an unbiased argument - indeed, facts support bias', or else they wouldn't exist." - Grand Historian

Ya know what would be cool.

Bring it down to the map level for the prosperity indicator. On scale to the cities, just repaint a certain portion of the provinces ground to look like prosperous farms. Or put like a smaller marketplace on the map maybe the same size, or a notch smaller than the construction crane.

Let it mesh with the city at the city scale.