Today we’re going back into the cartographer’s office to view the latest maps of the vast lands that lie just before the eternal steppes, where the Volga flows - the land of the proud Rus’. The Russian lands have always felt rather underdeveloped in CK2 compared to their size, even very important sites such as Kiev or Novgorod have been occupied by massive Counties that hardly give the area justice. As the area is one which lies in between the lords of feudal western europe, the Roman remnants in Byzantium and the relentless nomads of the steppes we thought it much too interesting to not develop further.

As Russia is quite big, we’ve broken the images up into three parts. These pictures are all from the year 769, so if something isn’t named as you expect it to be (i.e. Novgorod being named Ilmen) that’s the reason why.

Starting off with the north: 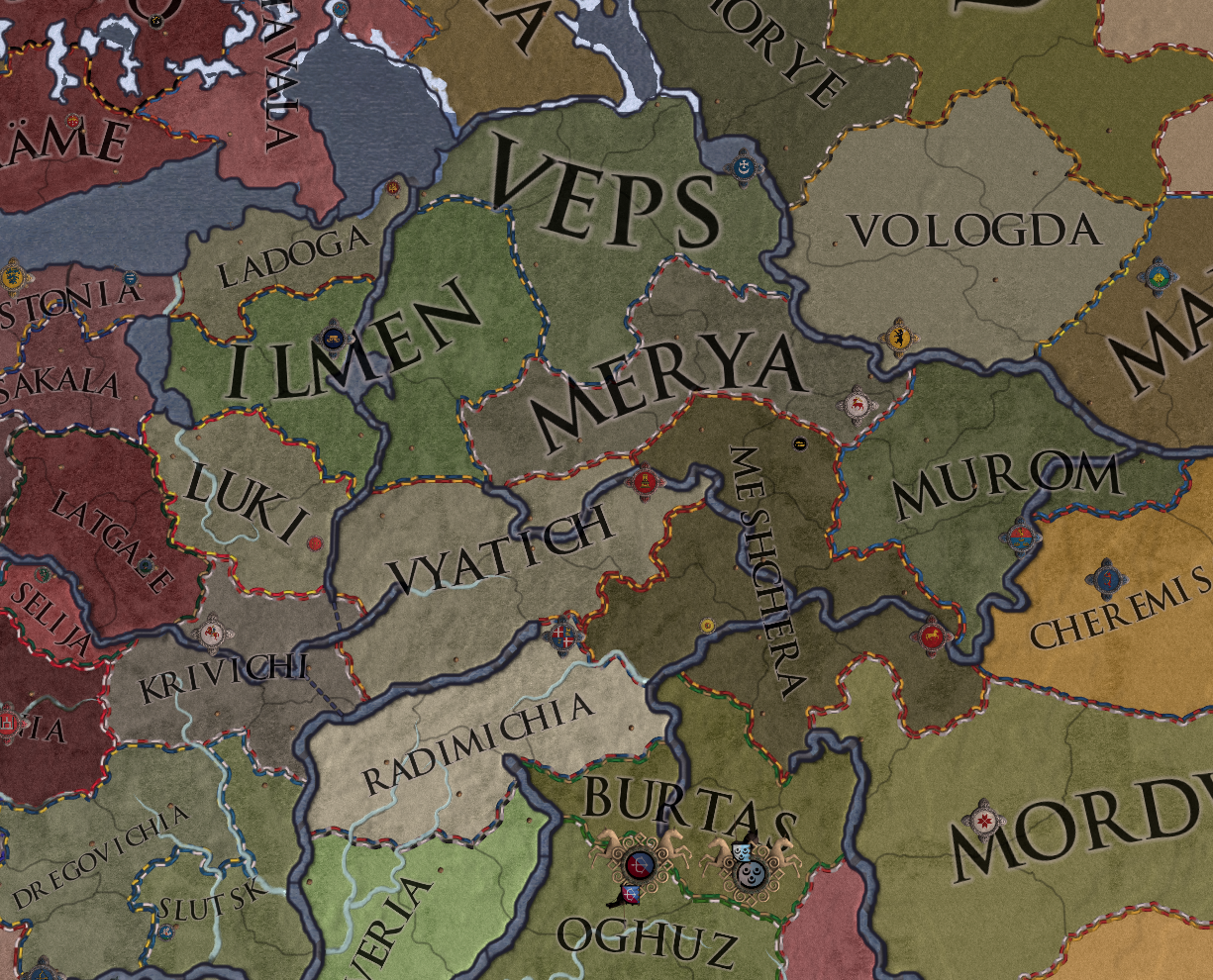 As you can see, the definition has increased rather significantly. Historicity has also been improved, as the new borders are all based on sources from between the years ~600 to ~1300 (From proto-slavic tribes migrating in the area to the dissolution of the Kievan Rus' by internal strife and the Mongol hordes) with a focus on the 700-1100 timespan. 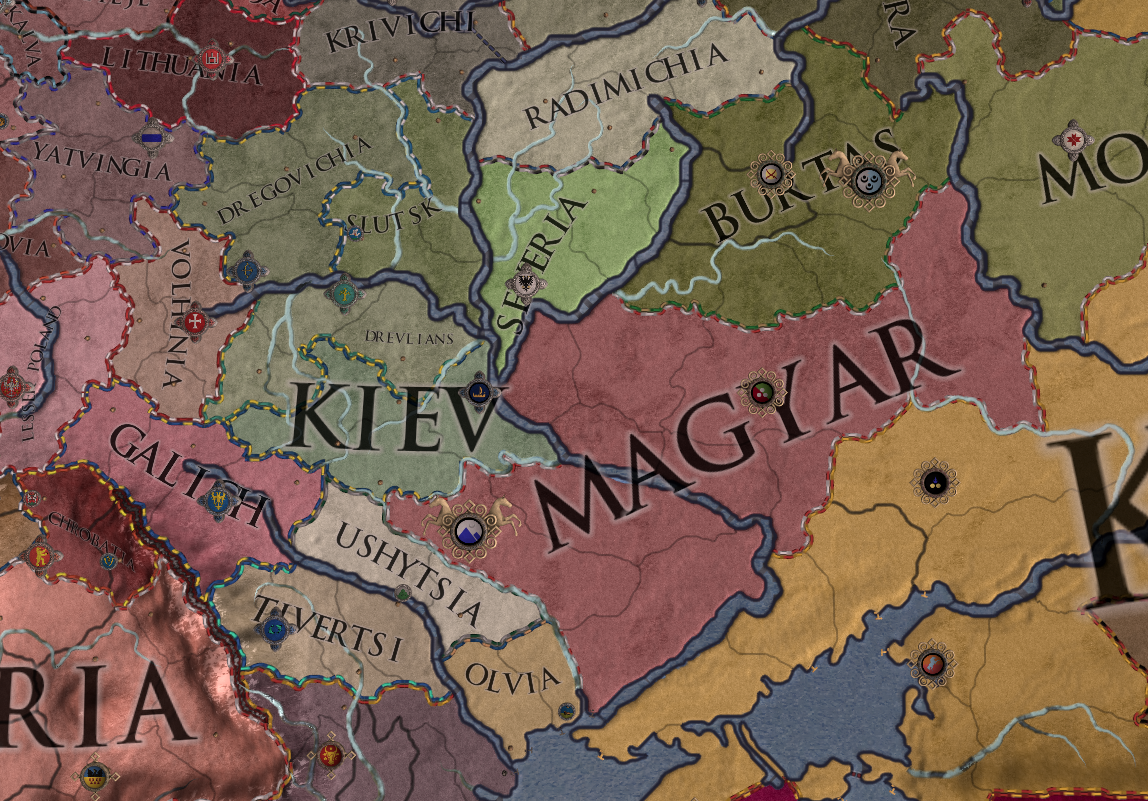 Of primary note is that Kiev is now split up, and no longer one single humongous County. Those of you with sharp eyes might also notice that there is a new nomadic nation up by Radimichia and Severia - the Burtas clan, which is Turkic.

And as a bonus, Wallachia: 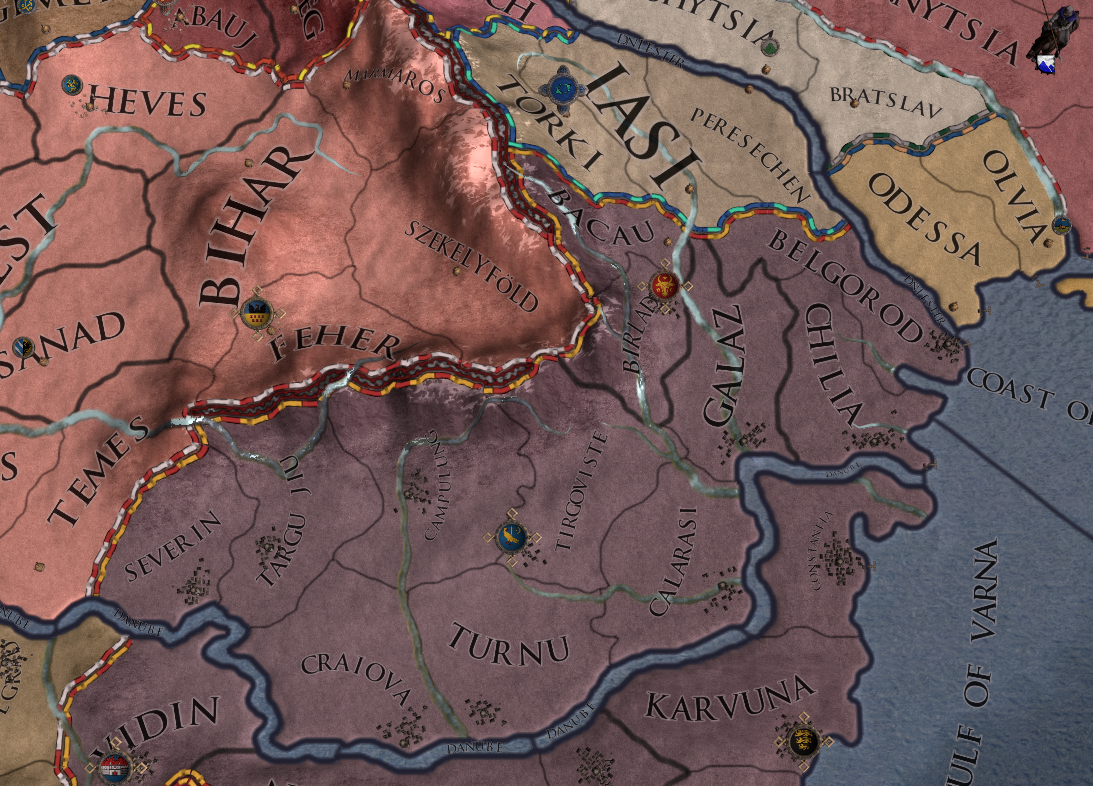 As Bessarabia was so interconnected with the Kievan and Crimean lands, it felt right to also give the kingdom of Wallachia a facelift.

And now for the De Jure maps, as they have been requested in every previous map Dev Diary so far! 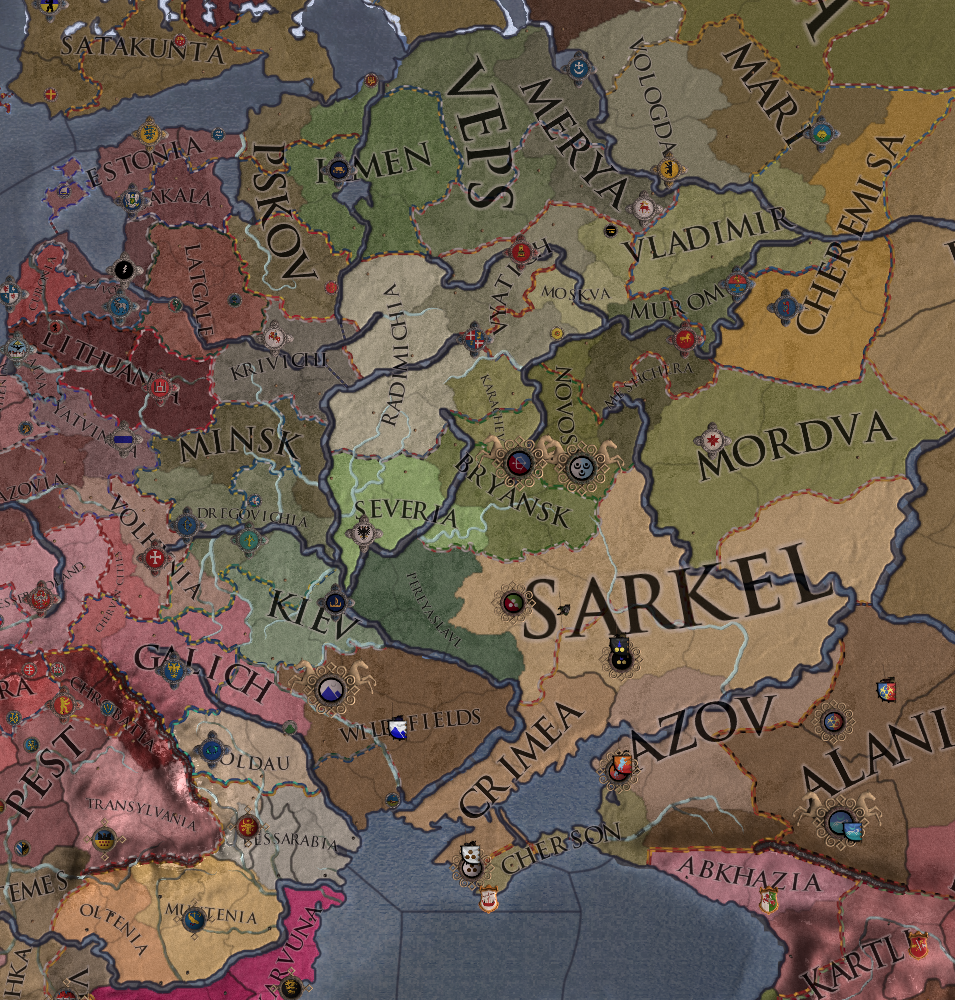 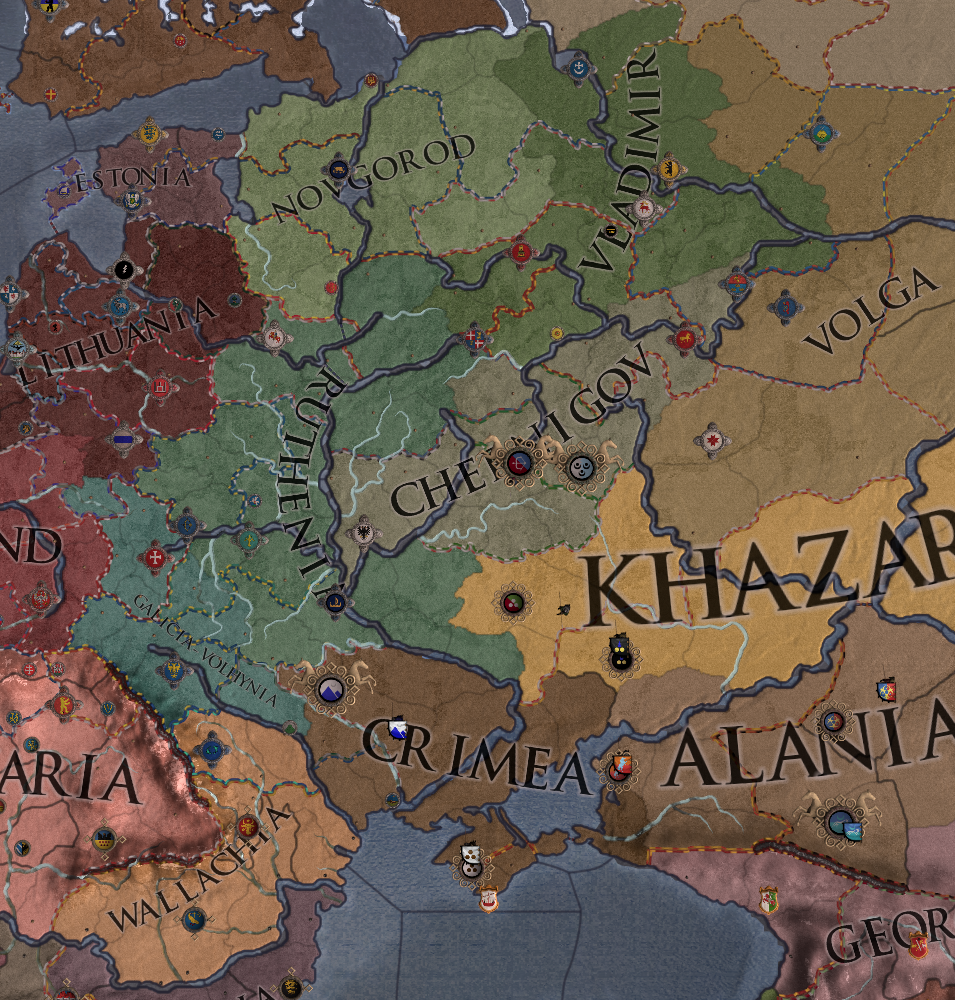 You may notice that the old Rus’ kingdom is gone, replaced with the much more historical kingdoms of Novgorod and Vladimir. There are also several new smaller kingdoms, such as Galicia-Volhynia and Chernigov which both provide new opportunities and new risks, depending on if you’re playing in the Tribal era or Feudal era. 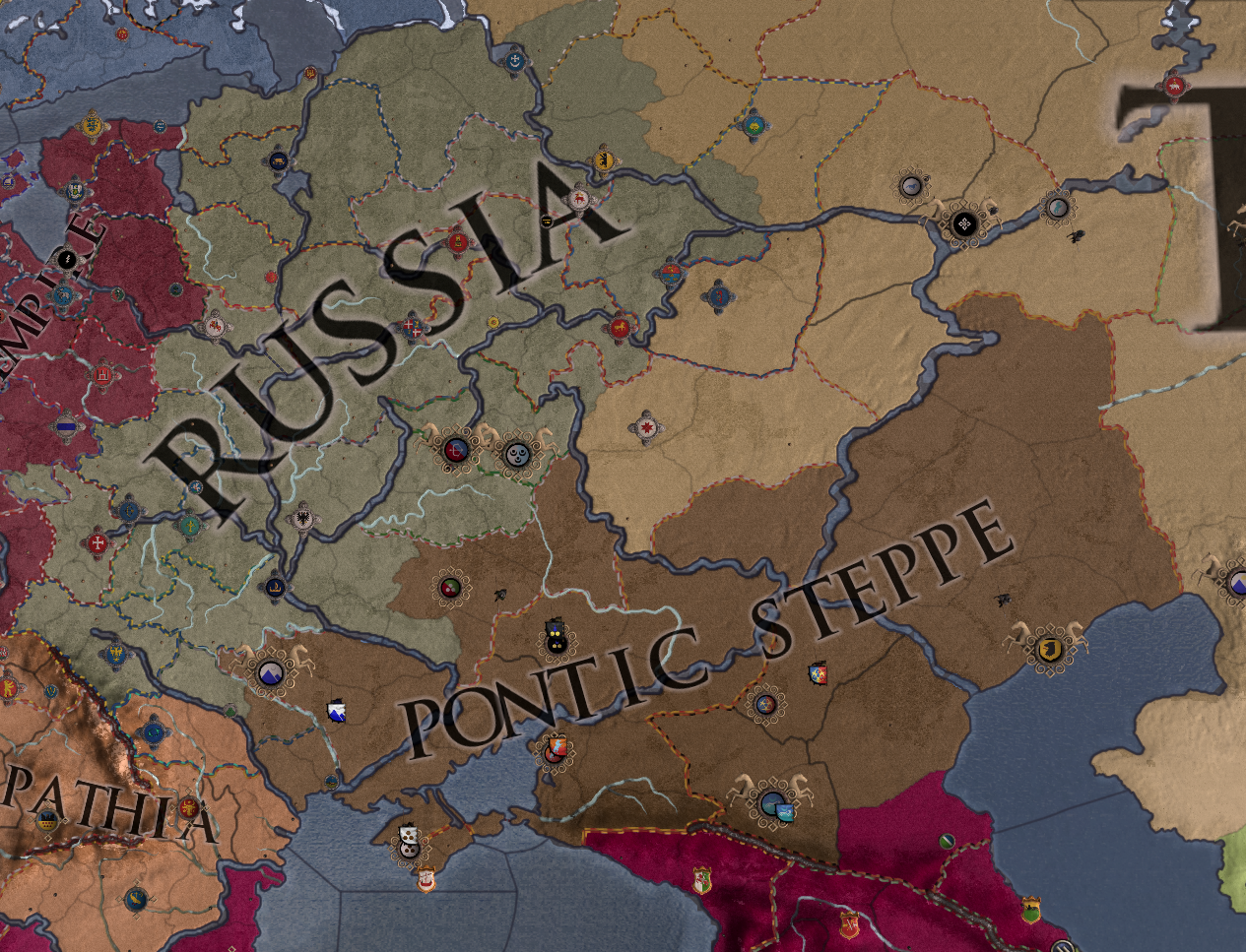 There was no doubt that the Tartarian empire was too big, that’s why when we had to add to it (the Kingdom of Perm is now part of it instead of Russia) we felt the need to break it up. In the south you can now see an empire of the Pontic Steppe - closely representing the Khazarian sphere of influence at its height.

Here’s a screenshot of how the 867 setup will look: 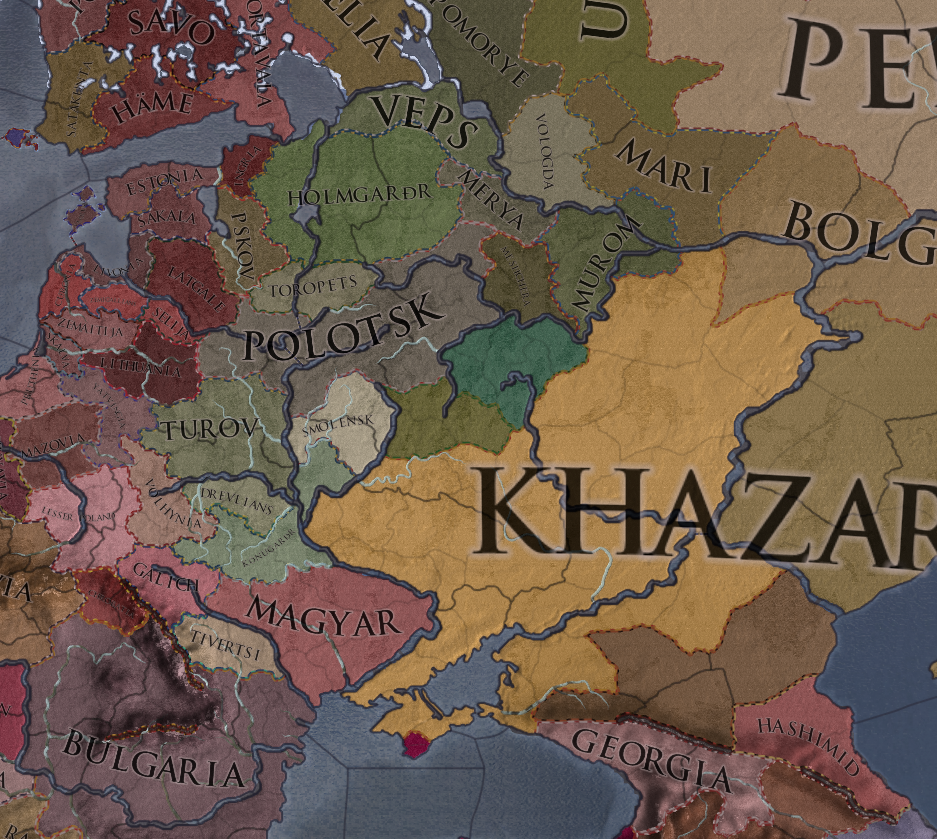 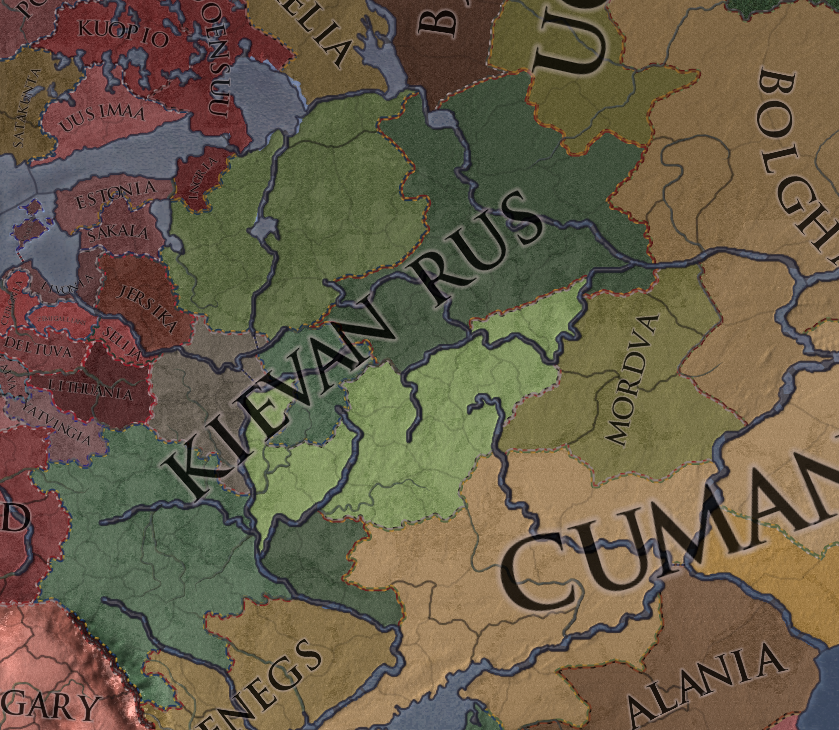 The major thing in this date is that after Yaroslav the Wise's death in 1054, his land in the Kievan Rus was divided between his 5 sons. Internal strife erupted quickly after between the sons and other relatives (like the prince of Polotsk), hurting the stability of the state.

That's why although the Kievan Rus' still existed as somewhat centralized around the Grand Prince of Kiev, at least for a while, unity wasn't the key word to describe the state. We've reflected that by keeping the different duchies independent but still tributaries to Kiev - until civil war starts again when brothers, sons, and cousins start pushing for their claims...

Code:
Note that from now on, CK2 Dev Diaries will take place on Fridays rather than Mondays!

Uh! Nice! I was expecting special crusades... but this is nice to.
Toggle signature
Small Mods:

Good to see you've redrawn Moldavia in particular. It was always a big turn-off from using the vanilla map. I'd maybe rename the empire of the Pontic Steppe to something less clunky, even if it's just Khazaria.
Toggle signature
"White collar conservative, flashin' down the street, pointing that plastic finger at me, they all assume my kind will drop and die, but I'm gonna wave my freak flag high, high!"

"I saw a strange thing happen in the fearful city streets, an oriental monk in robes was handing children sweets. Tiny candies that he offered from his begging bowl, and all who ate them underwent a sweetening of the soul. The children stopped their war games, laid their plastic rifles down, I asked the monk if there was always plenty to go 'round. He smiled and said zen candy is a rare and special feast, the principal ingredients are teardrops from the East."

rageair said:
Note that from now on, CK2 Dev Diaries will take place on Fridays rather than Mondays!
Click to expand...

So that means we'll be getting another DD later this week, right?

Jokes aside, the map changes are nice. Breaking up Kievan Rus is a good move, I think.
Toggle signature
"The LORD executes righteousness and justice for all who are oppressed. He made known His ways to Moses, His acts to the children of Israel. The LORD is merciful and gracious, slow to anger, and abounding in mercy. As a father pities his children, so the LORD pities those who fear Him. For He knows our frame; He remembers that we are dust. The mercy of the LORD is from everlasting to everlasting." (Psalm 103:6-8, 13-14, 17)

Finally! I am so excited about it! I thought that I would never play on historically accurate Rus.

On Fridays? Noooo... it should have been Tuesday (and EU4 on Wednesday and HoI4 on Thursday and Stellaris on Friday... so we could have it all nice and chronological :'( )
Toggle signature
Nationality: Croat
Age: 29
Religion: Roman Catholicism
Ideology: Rightist
Last Megacampaign: CK2 -> EU4 -> Vic2 - Crusader Panonians
Last EU4 playthroughs: France, Commonwealth

I'm Russian myself and I learnt history from Russian textbooks and maps. You know, with this and such map I can safely say that now the region is accurate as possible. Thank you, guys, you've manage to overestimate my expectations. So much love
Toggle signature
https://forum.paradoxplaza.com/forum/index.php?threads/streltsy-disasters.1104950/ - my suggestion of unique disaster for Russia and nations with primary culture of East Slavic culture group

There are already four diaries for new map, and all of them focus on Eastern Europe...

@rageair
CK2 dev diaries on Fridays from now on? So we get another one this week?
Guessing it’s for Imperator Rome dev diaries...
Toggle signature
Thorbjorn42gbf:
I love how basically all the rest of the worlds gamers go "My god more dlc's? why?" while people playing paradox games go: "YES DLCs EXPANSIONS GIVE ME NOW"

And for Friday: now we will have full week except holidays to read DD! Awesome
Toggle signature
https://forum.paradoxplaza.com/forum/index.php?threads/streltsy-disasters.1104950/ - my suggestion of unique disaster for Russia and nations with primary culture of East Slavic culture group

So I suppose Imperator will get the Monday slot?

Then where will be the de jure capital of e_russia? Kiev or Moscow?

Finally! Good to see Russia get some better shaped provinces. I will celebrate the death of the weird Kiev triangle province with much joy!
P

Well, super, but i think, that tivertsian lands should to be a part of Galicia-Lodomeria as well and Ryazanian duchies as a part of Vladimir and radmichia as a part of Chernigov/

Yes!!! Finally we got rid of this abnormality of kingdom of Rus!

What about the achievement "Russkaya Pravda"? Will it now require you to form the empire of Russia? Also, its description could use an update as it is pretty misleading right now.
Toggle signature
"Diacritics are important!" - a person obsessed with diacritics