CK2 Dev Diary #43: An Expansion Should Not Travel Alone

As was announced last week, Monk and Mystics will be released on March 7th. Which is only a week away! If you haven’t already, mark the date in your calendars. But to make the wait easier for you, I thought I’d share the details of the accompanying Content Pack.

The Monks and Mystics Content Pack includes two sets of portraits (which you may have seen already in the CK2 Monday Streams), along with fitting Unit Packs. First is the German Portraits. While named German, they will apply to the entire Central Germanic culture group. 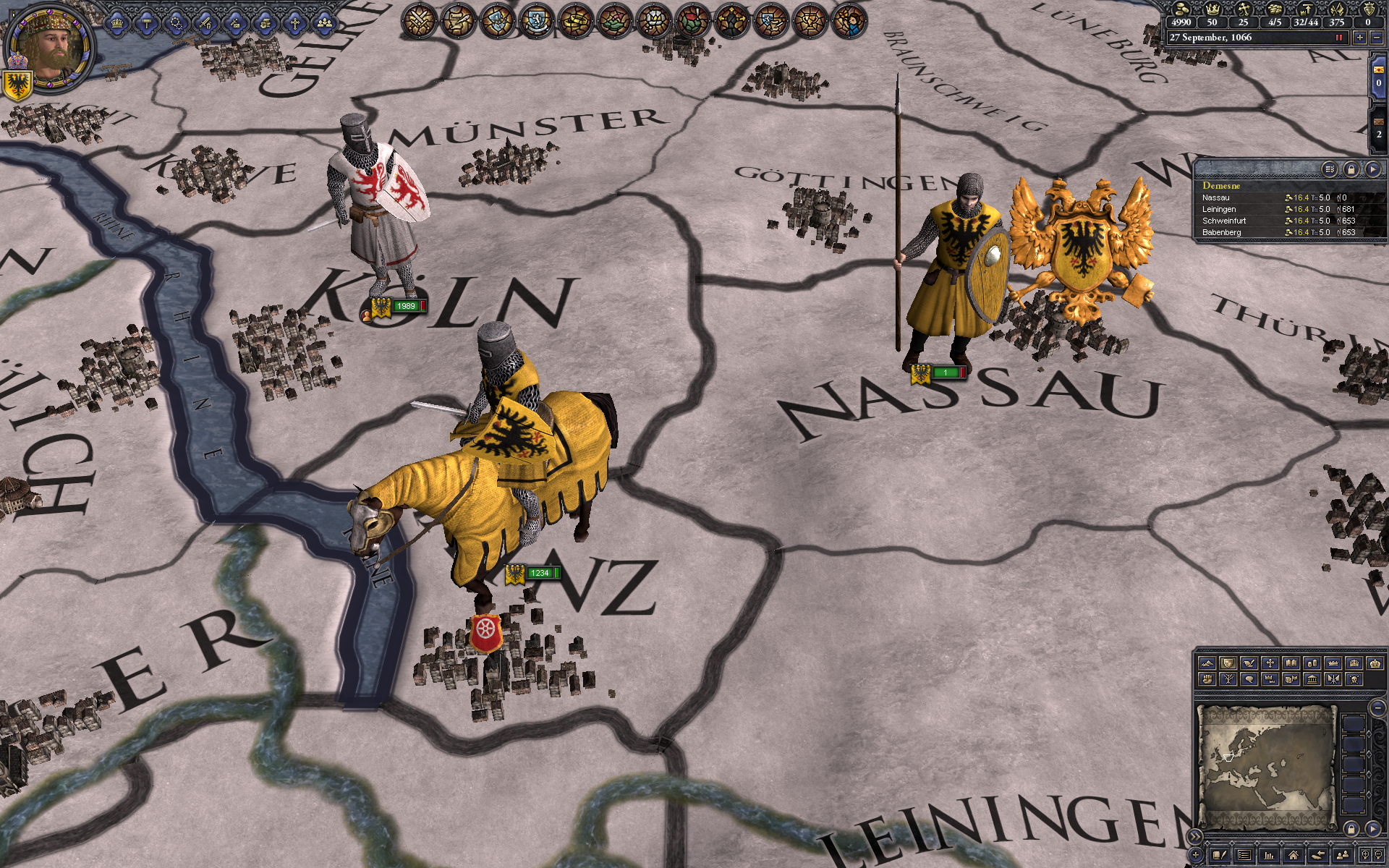 Next up is the English Portraits. Since English is only present in the later bookmarks of the game, we made the portraits also apply for Normans, to make sure that you can play with them without having to start very late.

And the English Unit Pack: 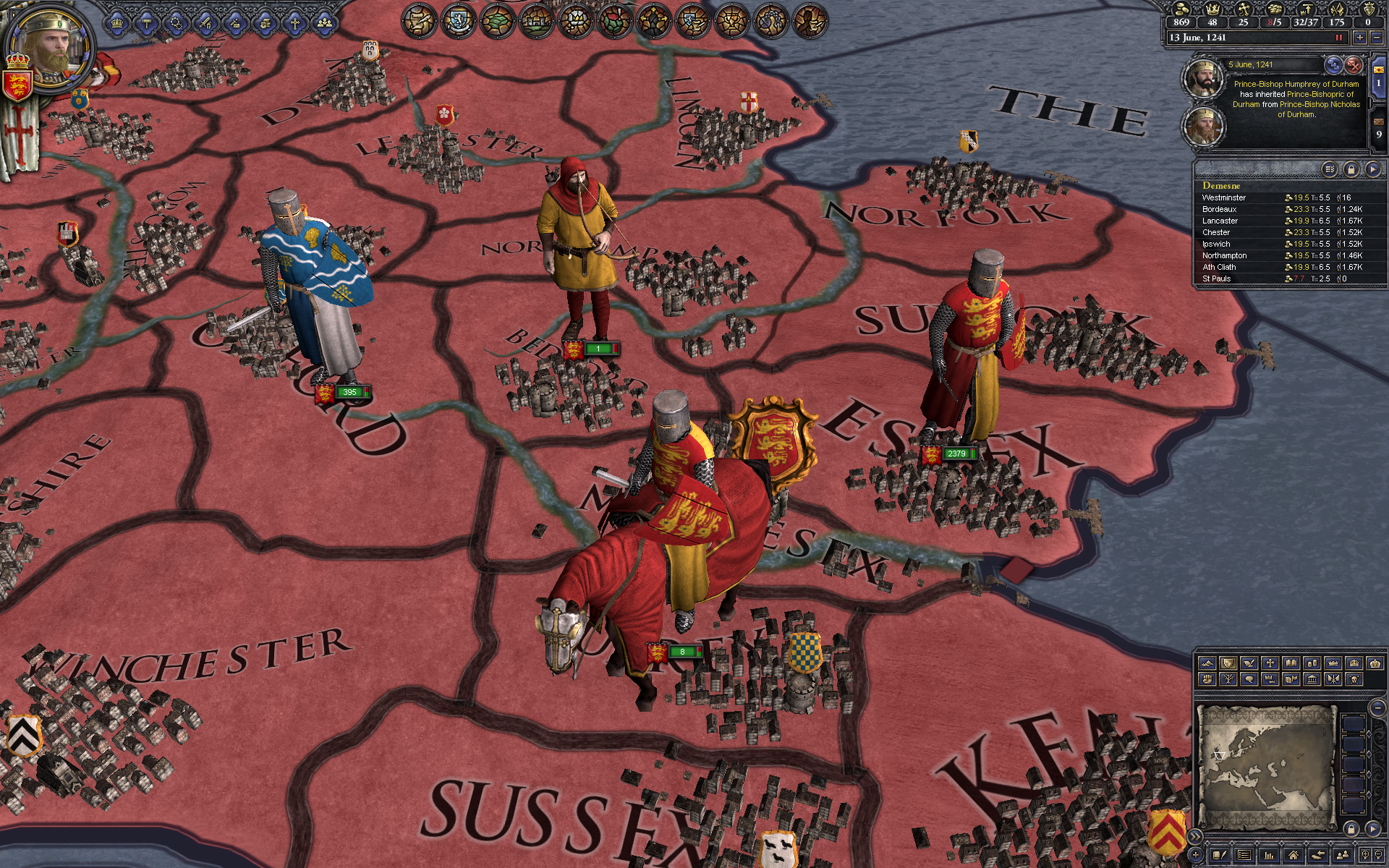 An important note is that the Content Pack will be bundled with Monks and Mystics and automatically included when you buy the expansion.

I’ll also provide you with the remainder of the changelog that I didn’t give you in the dev diary of last week. There are a few AI improvements in there, to accompany the new AI Orders, along with a huge list of new modding stuff for all the new features and mechanics. And of course, the usual bug fixing.


###################
# AI Improvements
###################
- Fixed the AI sometimes cancelling its movements due to not realizing that doing so would mean that there are now fewer troops on the way to the target province
- Fixed the AI only considering the main settlement of a province for figuring out whether it is hostile, rather than all settlements
- The AI now accounts for how far it has walked towards a province when figuring out how "distant" it is
- Fixed the AI sometimes getting horribly confused when merging a lot of armies at once
- Fixed the AI sometimes getting horribly confused by islands when merging armies
- Fixed an issue where the AI would keep sieging despite being outnumbered by the garrison
- Fixed an issue where the army AI would overestimate its troops in any given province by a factor of two, leading to erratic movement
- The AI will now use their best non-viceroyalty title when making marriage calculations, meaning they'll no longer accept matrilineal marriages to their heirs just because their heir won't succeed them to the viceroyalty
- Fixed the logic for the AI being willing to move to your court based on you being able to press their claim(s) sometimes being wrong

Fixed characters in some cases ending up your direct vassal upon granting them a title when there's still an appropriate intermediary vassal to serve as their liege
Click to expand...

Does this mean that this bug also got fixed?

Servancour said:
Since English is only present in the later bookmarks of the game, we made the portraits also apply for Normans, to make sure that you can play with them without having to start very late.
Click to expand...

Why not Anglo-Saxons too?
Toggle signature
The game I'd love to play, if Paradox ever made it, (and a little extra detail).

Good lord, those portraits are fantastic!

Battle bunny said:
Does this mean that this bug also got fixed?
Click to expand...

No. You can still do this by granting a the vassal of a vassal a title of the same rank or higher than his liege. What the fix means is that sometimes you could grant, say a count under a king (with you being the emperor), a duchy and instead of remaining a vassal to the king, he would become your vassal.


IFWanderer said:
Why not Anglo-Saxons too?
Click to expand...

It was something we discussed, but it ended up not being done for now. More due to no one having the time to do so than anything else (portrait can easily get messy when there are a lot of other portraits to consider for compatibility).

Servancour said:
No. You can still do this by granting a the vassal of a vassal a title of the same rank or higher than his liege. What the fix means is that sometimes you could grant, say a count under a king (with you being the emperor), a duchy and instead of remaining a vassal to the king, he would become your vassal.
Click to expand...

Understood. I was hoping it'd get fixed, but maybe another time...

think we could get an updated on achievements you plan to add with this next expansion?

Servancour said:
An important note is that the Content Pack will be bundled with Monks and Mystics and automatically included when you buy the expansion.
Click to expand...

This explains why the expansion is so expensive while being smal.. Nice!
Toggle signature
Small Mods:

Nice work also south slavs when?
Toggle signature
Each scar is a victory.

So, who are left with standard european protraits? French, Anglo-Saxons, West Slavs, South Slavs, and ...?

Not too thrilled myself with all of the mystical fantasy mumbo-jumbo myself (but, as always, I'll defer my final opinion until I've actually played with it to see how it pans out), but based on previous dev diaries about all of the QoL improvements that are going to be in this expansion as part of the free patch, I'll be buying it as soon as I can lay my hands on it, no matter what.

Or, to put it another way, I would have paid full price for those improvements alone.

Consider me on the hype train. Oh, and any and all expansions to portraits are welcomed by me. I love variety!

(Now, if only we could get some variety in the kids' portraits as well. It has always jarred me that kids look the same from infant to teenager, and then magically get a personality. But that's really very minor).

Unfortunately no new music
I love the music packs, GFX packs are also nice, but Music is soo much nicer.

C.N. said:
So, who are left with standard european protraits? French, Anglo-Saxons, West Slavs, South Slavs, and ...?
Click to expand...

I'm glad that the content pack is being bundled with the expansion. I never really liked the separation of graphical DLCs. I understand that the point was to offer us the option of not buying something we might now want, but it kind of felt like it increased the overall price if you buy everything. In addition, it creates far too many individual DLCs, which can be confusing to new players. I hope you guys bundle these from now on for CK2, as well as with the other Paradox games (particularly EU4).
Toggle signature
Hearts of Iron 4: Communist USA, Germany, Soviet Union, United Kingdom, Japan, Fuhrerreich Italy, Kaiserreich France
HOI4 Beginner Guide Part 1 & Part 2, Unit Types & Division Designs, Navies, Invasions, & Supply, Air Force, Diplomacy
Crusader Kings II: Lusignan Dynasty
Europa Universalis 4: England
Stellaris: Walmart Slugs MegaCorp